Magnus Weidemann was born in 1880 in Hamburg, Germany. As a young child he looked up to his older, artistically-inclined brother Theodor. Theodor died young and Magnus inherited his art supplies. By 1898, at age 18, Magnus began his career as a painter, mostly of watercolors. The latest Magnus Weidemann painting I could find is Storm Surf, painted in 1967. He was a painter for at least 69 years.

Mädchenakt mit Vergissmeinnicht (Naked Girl with Forget-Me-Nots) was painted in 1927. In searching for Weidemann’s paintings, I was unable to find many young nudes. Art sites devoted to Weidemann concentrate on his landscape paintings. A few landscapes have a nude adult woman in the painting. I found only two Weidemann paintings of girls, both on auction sites. Mädchenakt mit Vergissmeinnicht was very small on the auction, but Pip provided a better example. 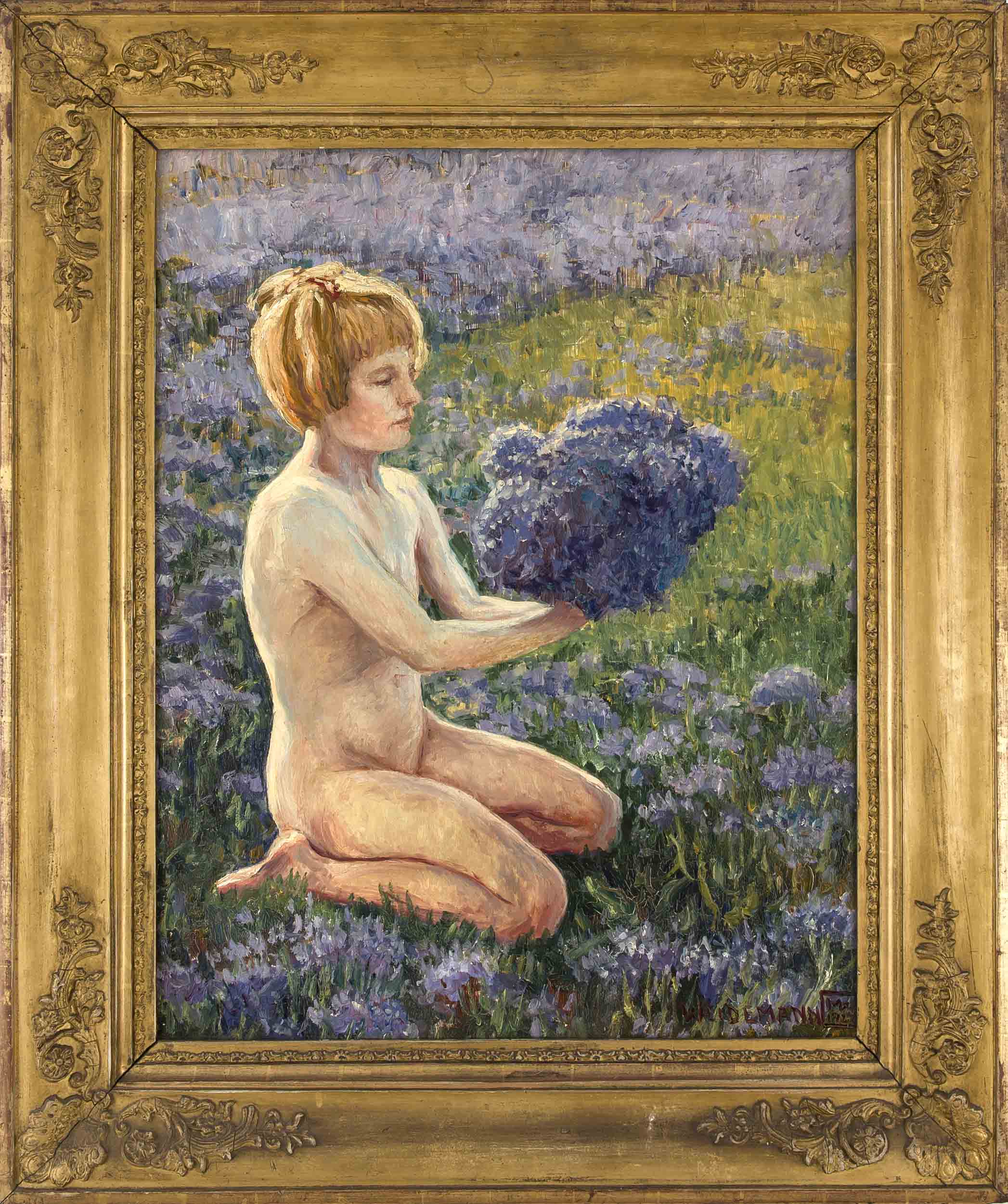 Some time around 1898 to 1900 Weidemann found his first nude model, who was also his cousin and would later become his first wife. Weidemann was married three times. The names of his second and third wives, but not his first, can be found in online biographies of Weidemann. It would be interesting to know how old the first Mrs. Weidemann was when she started modeling, but I could not find any more information about her. 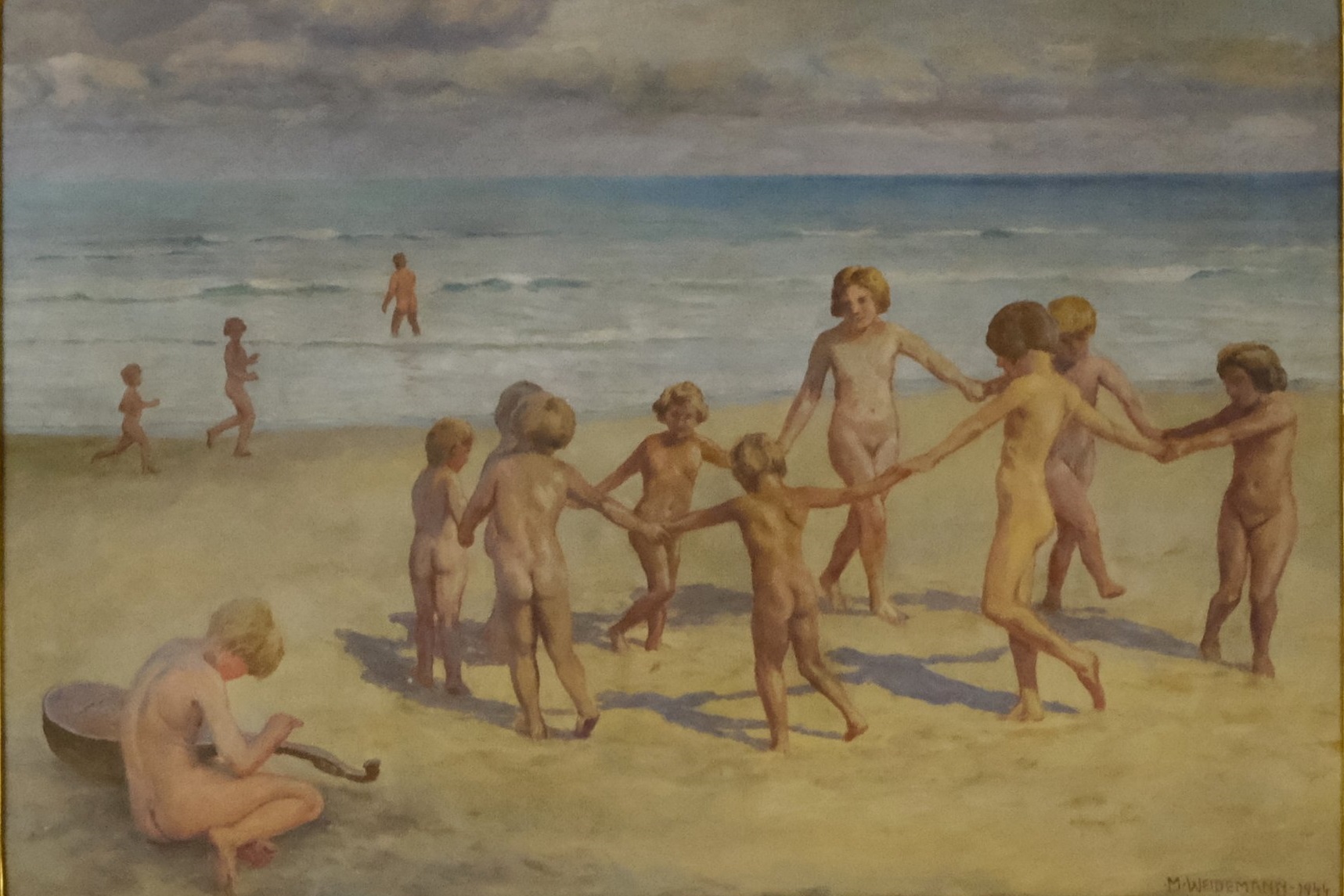 Magnus Weidemann – Children on the Beach (1944)

Painting was Weidemann’s passion, but did not pay well enough to support him and his wife. In 1900 he began studying Protestant theology, and in 1908 became the pastor of St. Clemen’s Church in Nebel, Nordfriesland, Germany. At the start of World War I Magnus Weidemann volunteered to serve as a medic in France. Later during the war, Magnus and his wife divorced. When Magnus returned to Nebel he made a studio in the rectory and hired a housekeeper. The housekeeper brought with her a twelve-year old foster daughter. Both the housekeeper and the child modeled for Weidemann. 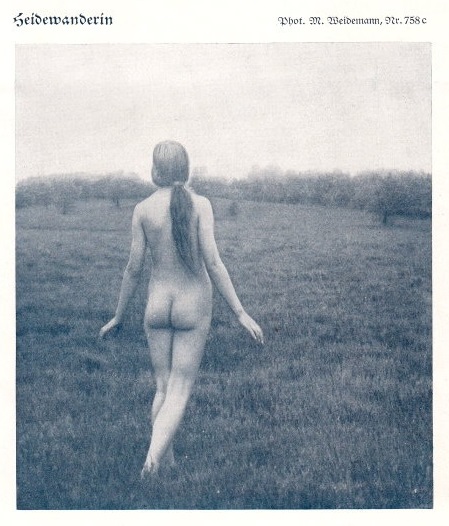 Weidemann met Molli Mollenhauer, a twenty-year-old dancer and gymnast in 1919. She became Weidemann’s model, and in 1920 she married him. Magnus resigned as a pastor and moved to the nearby town of Siethwende. Magnus and Molli became involved in Freikörperkultur (FKK, nudism) which was gaining popularity at the time. Weidemann became friends with two other prominent artists: the photographer Lotte Herrlich and the symbolist illustrator Fidus (Hugo Höppener). In 1926 Weidemann moved to the German Island of Sylt, which was then and remains to the present a popular destination for naturists. He continued to live on Sylt for the rest of his life.

In the 1920s, Weidemann’s painting came to be eclipsed by his work in photography. His photography documented the FKK movement with images of people of all ages, mostly female. In 1923 he became editor of the nudist magazine Die Freude. Many of his photographs and poems appear in the magazine, and other German FKK magazines. He wrote the preface to Lotte Herrlich’s book Rolf, and wrote books of his own, including Körper und Tanz and Deutschen Baden. 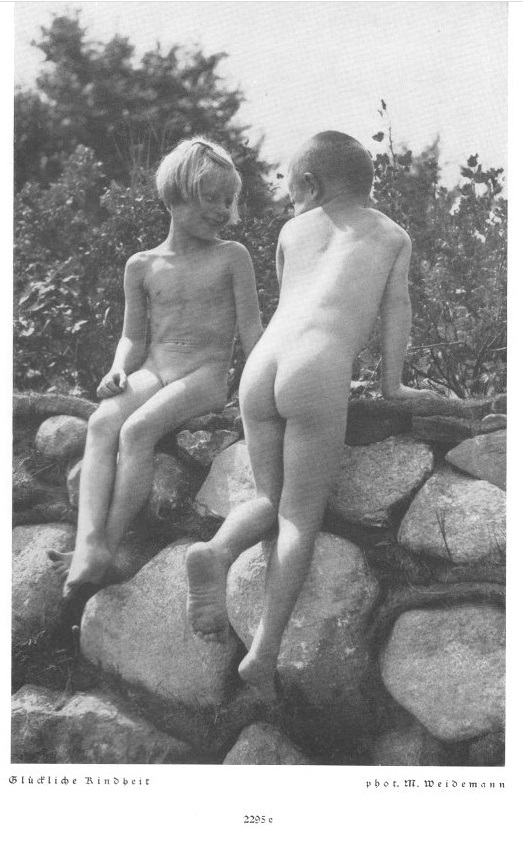 These photographs are all from naturist publications available online at the FKK-Museum site, and are from the period of 1926 to 1930. Naturist magazines from the 1920s and 1930s in the FKK-Museum contain many artistically-posed photos, similar to poses in nude paintings. Publications of the 1950s and later have a greater proportion of casual photos, more like family snapshots than fine art paintings.

Glückliche Kindheit (Happy Childhood) is also from Die Freude; this photo was published in the May 1927 edition. Although Weidemann concentrated on women and girls, he photographed some males as well, as in this photo. In his 1997 book Empire of Ecstasy, Karl Toepfer quotes Weidemann as saying he finds female subjects more suitable for nude photography because males are “active in contrast to the passive-intuitive character of women.” 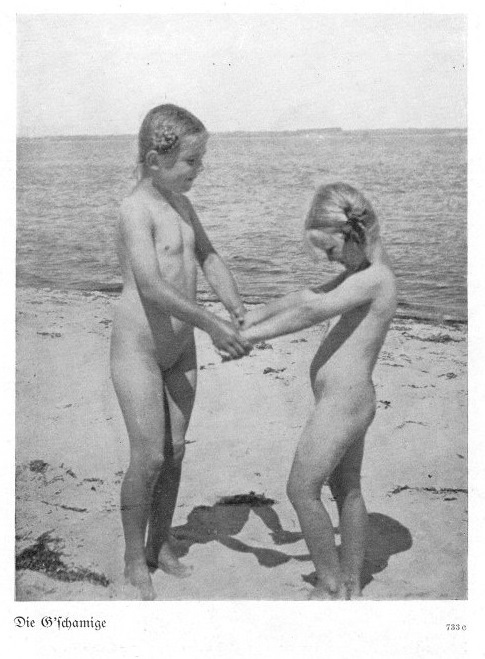 Blumen (Flowers) is from the November 1927 issue of Lachendes Leben. Note the similarity of the pose to Gretchen and Gisela. The last two photos are from the book Deutschen Baden by the artist. Weidemann lived and worked on the North Sea coast of Germany, in the area where Frisian is spoken. Die G’schamige is translated from standard German (Hochdeutsch) as “The Shameful” , and from Frisian as “The Shy”. Struwwelpeter is a colloquial term for a child with messy hair. 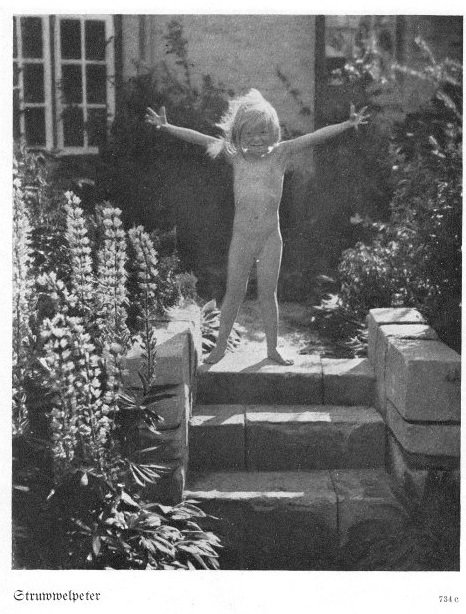 Molli Weidemann moved to Cologne to train as a dance teacher, and Magnus hired a housekeeper whom he married in 1932. He continued working as a painter and photographer until his death in 1967.