Although Pip has resigned, there is still a backlog of images that he periodically passes on to me.  For a great many artists, painting children, nude or otherwise, was not their main emphasis or they were not especially noted for it.  And yet, as a legitimate subject, they were sometimes included in compositions.  For pieces that are on-topic for this site but little is known about the artist or work of art, they can be presented as a short post of ‘Random Images’.  This will only be for identified pieces.  Interesting images of unknown origin will still be posted on the ‘Little Orphan Images’ page.

There is a little information on Friedrich August von Kaulbach (1850–1920), but it appears he was a member of an artistic family. 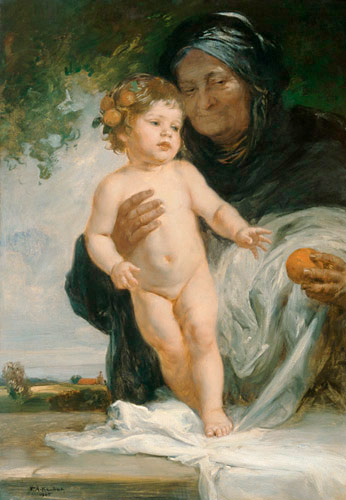 It turns out that Pip had posted another image by this artist a while ago.  Take a look here.

It is my hope that someone might come forward to serve as Random Image Editor-Researcher.  The idea is to take backlogged images and check to see if they should be posted like this or be saved as part of a more extensive post.  -Ron

Sheet music in its heyday was often published with beautiful covers.  This one is for a classic Edwardian pop song called I’ve Got a Pain in My Sawdust, which, I gotta admit, is more than a little creepy, especially when sung by the voice of Betty Boop–-it’s about a doll that requires urgent medical attention. Weird, huh? But anyway, if you’re a regular follower of this blog, you should recognize this one, even though the colors are muted here. 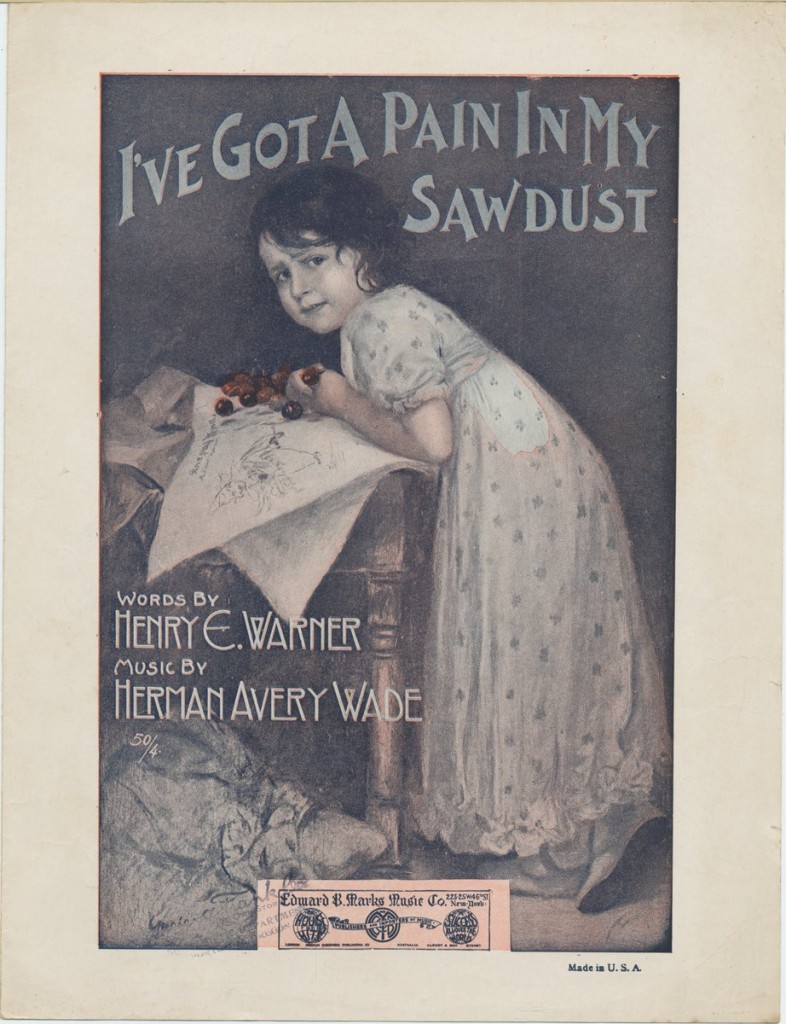 There is a garden in her face
Where roses and white lilies grow;
A heav’nly paradise is that place
Wherein all pleasant fruits do flow.
There cherries grow which none may buy,
Till “Cherry-ripe” themselves do cry.

The above is the first stanza of Thomas Campion’s poem “There is a Garden in Her Face,” a paean to a beautiful virginal girl. How do we know this? We must first put it into historical context. Cherry vendors in England traditionally used the call “Cherry ripe!” to let people know that cherries were ready to buy. If we apply this fact to the poem, we see that the man is describing a girl that, while beautiful, is not yet ready to be “bought”—that is, she hasn’t quite reached sexual maturity. Campion admires this girl for her sexual purity, which he acquaints with spiritual purity. Here we have a basic explanation for the Victorian cult of the girl (which followed Campion by a couple hundred years): girls, because of their perceived innocence and sweetness, were considered above all other natural human groups to be the closest to God, so long as they maintained their virginity, hence British society’s horror of the underground culture of girls being kidnapped and deflowered—brought to light by W. T. Stead’s series The Maiden Tribute to Modern Babylon, and likely highly exaggerated therein—which compelled Britain’s Parliament to raise the age of consent from 13 to 16.

In terms of cherries being associated with young girls and virginity, many people seem to be under the impression that slang terms like cherry, in reference to the hymen, was invented by their generation, or at least the generation before theirs. In fact, this is not so:

“cherry […] Meaning “maidenhead, virginity” is from 1889, U.S. slang, from supposed resemblance to the hymen, but perhaps also from the long-time use of cherries as a symbol of the fleeting quality of life’s pleasures.”

There we have it. The slang term dates at least to 1889, but I suspect the association of this particular fruit with virginity dates further back than even Campion’s poem, which was first published in 1617. And we are also given another, older, symbolism for cherries in the above etymology: they stand for the fleeting quality of physical pleasure. This too can be tied into sex, but also to childhood, which is itself fleeting. This symbolism is the Western tradition, but even in the East the cherry (and more specifically the cherry blossom) are also associated with maidenhood/virginity. We are more concerned with the Western mode here, but I do find it interesting that such disparate cultures can arrive at a similar symbolic representation, don’t you?

Back to the poem. We get the impression from the final stanza not of a full-grown woman—worldly and self-assured—but of a nervous girl being approached by potential mates, as if she is a wary doe being stalked by wolves on the hunt.

Why am I bringing all of this up? It is to lay the foundation of context for one very interesting painting, that painting being Sir John Everett Millais’s “Cherry Ripe”, a deceptively simple portrait of a little girl in a white dress with pink highlights sitting on a log in the forest . . . 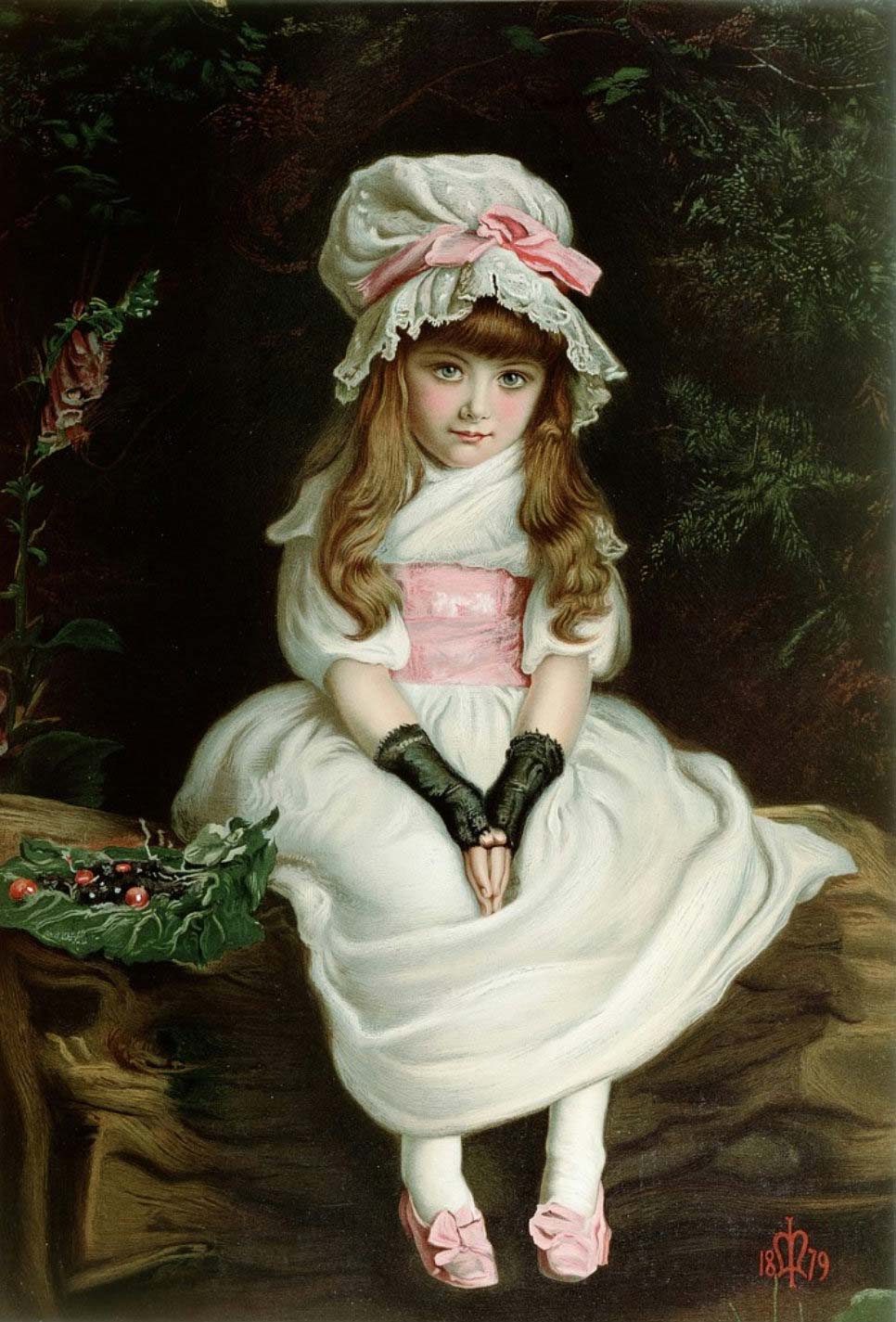 Millais was a Pre-Raphaelite painter, and like most of the Pre-Raphaelites, he loaded his art with symbolism. First, the semiotics of color. White was of course the color of purity. Children, particularly little girls, were often dressed in white for formal portraits. Moreover, the child is placed against a dark and shadowy forest from which any wild beast could emerge and snatch her from her perch; unlike most portraits, which are set safely indoors or illuminated spaces, this one is actually a bit edgy. More likely than not this was intentional on Millais’s part. I have mentioned before that semiotically a white figure against black backdrop stresses the figure’s vulnerability or purity—or, in this case, both—in a morally nebulous world. Pale pink, which is traditionally associated with young girls, is also the color of cherry blossoms, and the child’s flesh is also pinkish. Here we have a figure composed almost entirely of white and pink. The lone exceptions are her eyes and hair and the black gloves, but as they were a conscious choice, it is the gloves that draw our attention.

The gloves are black. The color black has many symbolic interpretations, but here it screams sexuality. Look closely at the girl’s hands: they are placed in her lap and closed together prayer-style, only inverted. The gloves are fingerless, V-shaped and adjacent to her hands, inevitably funneling one’s attention right to the girl’s fleshy, exposed fingers, and (as more than one art critic has pointed out) those fingers happen to resemble a vulva.

Now some questions arise. Was this accidental or deliberate on the part of Millais? I suspect the answer is somewhere in between. And what exactly is Millais saying with this painting? Perhaps he is wrestling with the Victorian notion of the asexual girl-child, and suggesting that it may be a tad more complicated than that. Maybe he’s being ironic. After all, despite the title of the piece, the little girl is clearly nowhere near being “ripe”, and indeed some of the cherries lying at her side belie the title as well. Then again, maybe it is entirely coincidental, but I doubt it.

There is one other possibility I can think of. Millais was a friend of culture/art critic John Ruskin, who was married to Effie Gray at the time they met and became friends. But Ruskin had been married to Effie for several years and had yet to consummate the marriage, owing to, it was rumored, his mortal dread of pubic hair. Ruskin, like Lewis Carroll, had written a book for his beloved when she was still a child. The book was The King of the Golden River. Unlike Carroll, however, Ruskin was eventually able to marry the girl he had eyes for, although Ruskin and Effie were only nine years apart in age whereas Carroll and Alice Liddell were twenty years apart and of different social classes from one another. Anyway, Millais and Effie eventually fell in love, the marriage between Ruskin and Effie was annulled, and Effie remarried Millais, with whom she had eight children. (Side note: The oldest Millais daughter—also called Effie—was even one of Lewis Carroll’s photographic subjects.) Now, Ruskin was a fan of the Pre-Raphaelites, but given the embarrassing situation between Ruskin, Millais and Effie, it is little wonder that Ruskin began to condemn Millais’s post-marriage work, ostensibly because it was of lower quality according to Ruskin, but in reality it is more likely that Ruskin felt slighted and used his power as a critic to avenge the loss of his mate to Millais the best way he knew how. Is it possible, then, that Millais, with the painting “Cherry Ripe,” was publicly mocking Ruskin and his supposed pubic hair phobia? Probably not, but it is worth considering.

And speaking of Lewis Carroll, perhaps the next most famous artwork featuring little girls and cherries after the Millais piece is Carroll’s photo of the Liddell sisters (Edith, Lorina and Alice) in which the oldest girl, Lorina, is feeding Alice a cherry. Alice stands with her head cocked and mouth slightly agape, like a baby bird waiting to be fed by its mother. And, of course, Alice would be the one to be fed, given Carroll’s ongoing fascination with her. 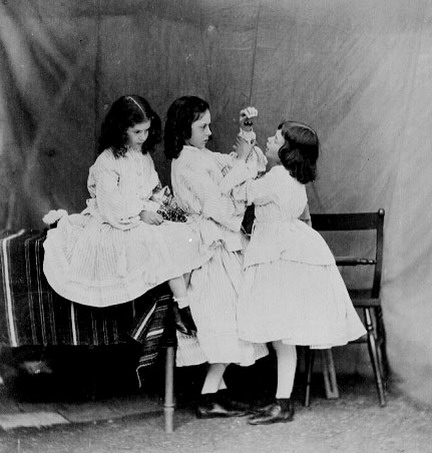 The above was one of several Carroll works that Polixeni Papapetrou created a tribute to. 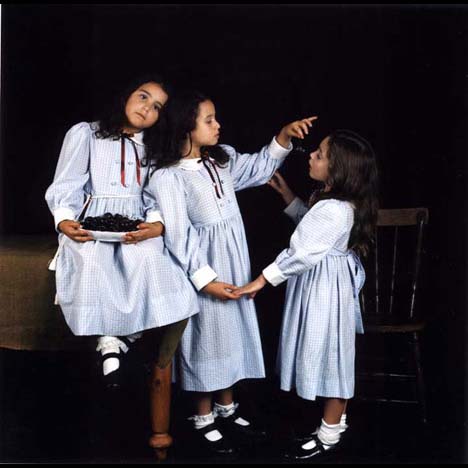 One step removed from this, cherries—really any fruit, but apples and cherries in particular—can represent transgression, as in the story of Adam and Eve, in which children stand in for the first humans and the crime that brings on their downfall is theft. 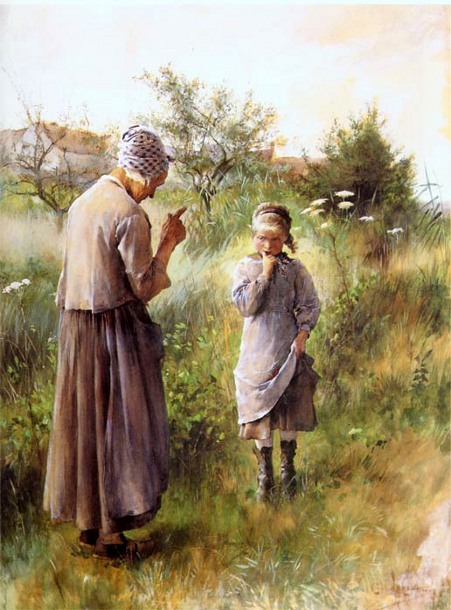 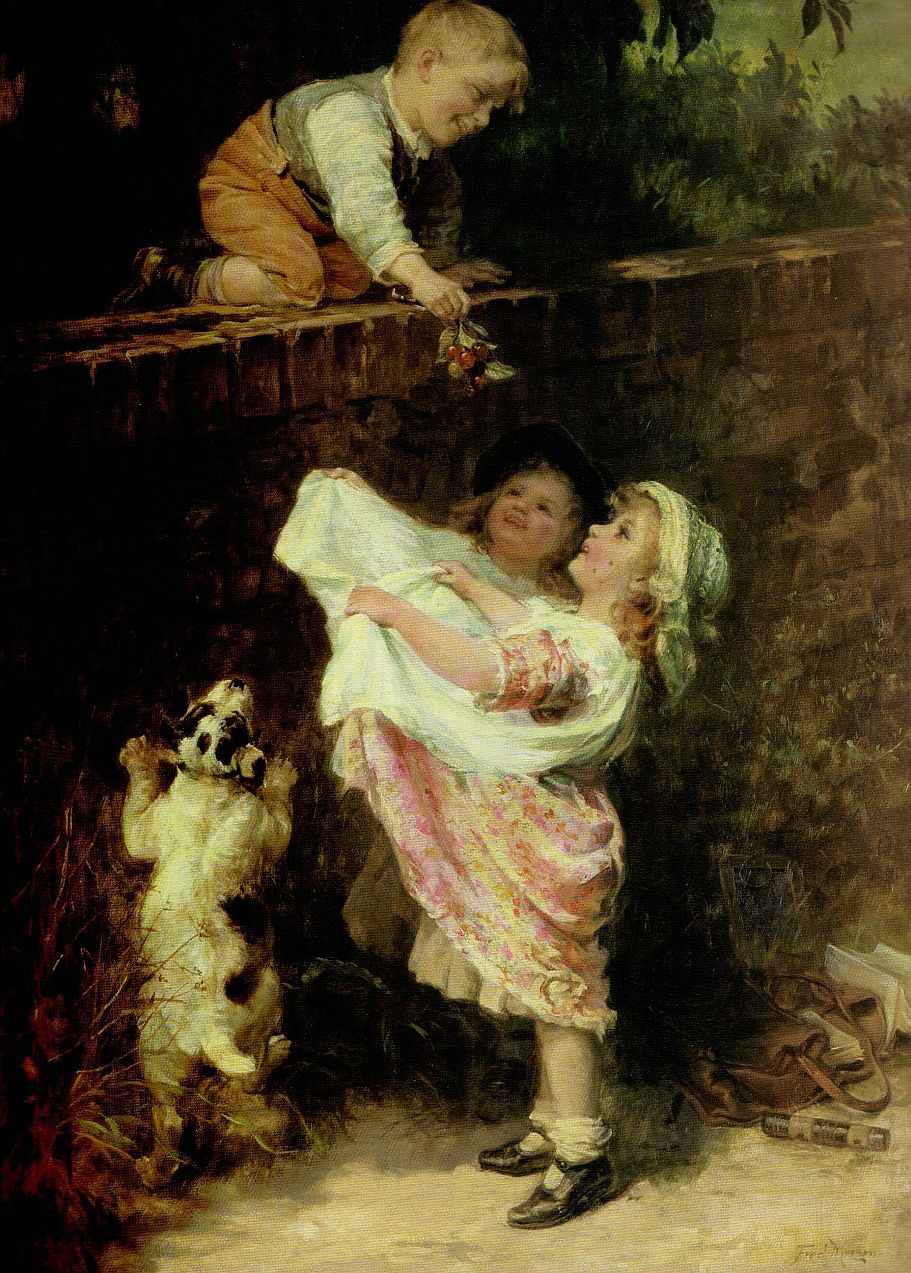 Note the coy and mischievous expression on this girl’s face: 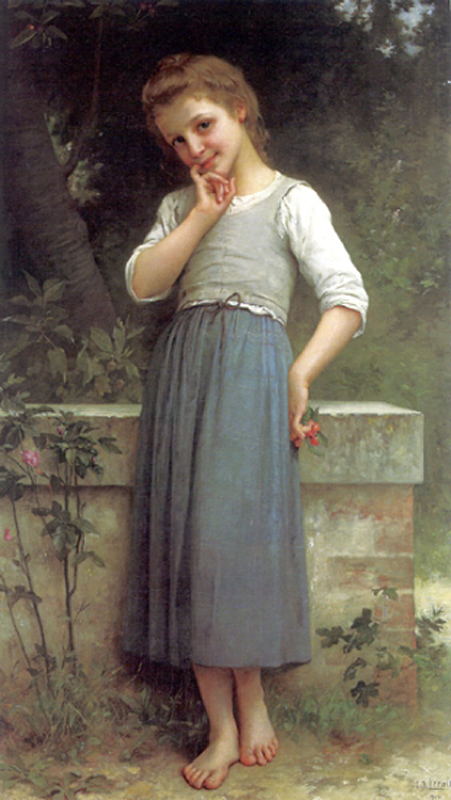 Cherries can also represent intimacy, both romantic and familial. 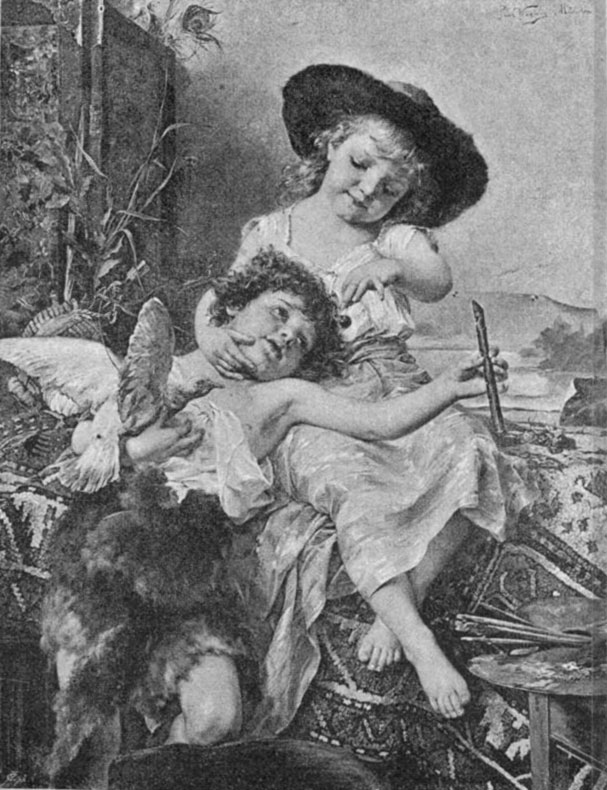 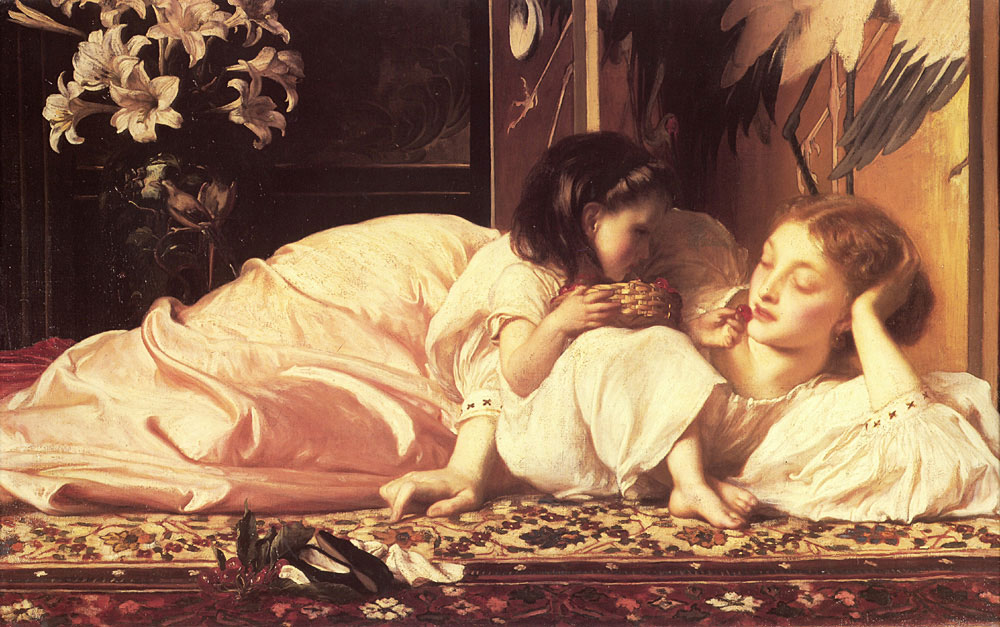 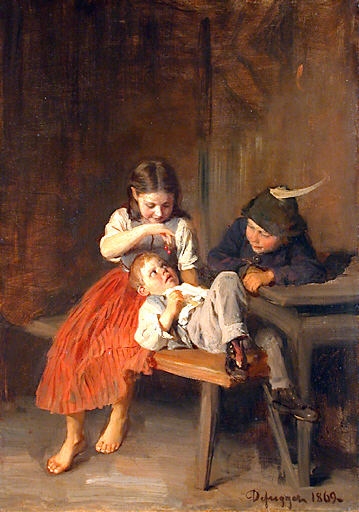 Cherries can become an amusement for little girls playing at being women. 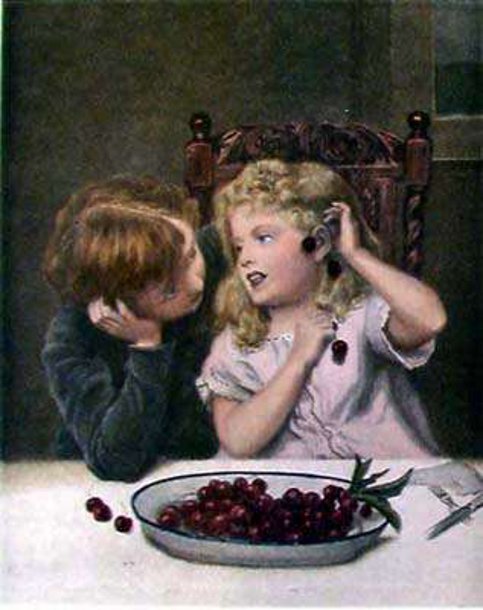 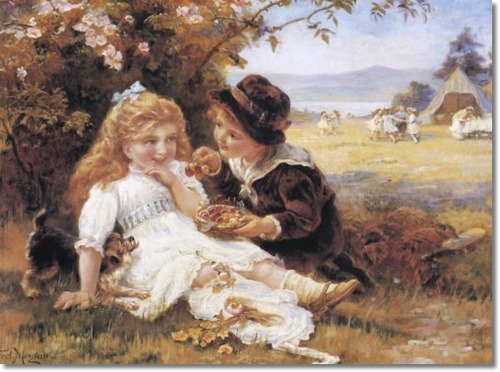 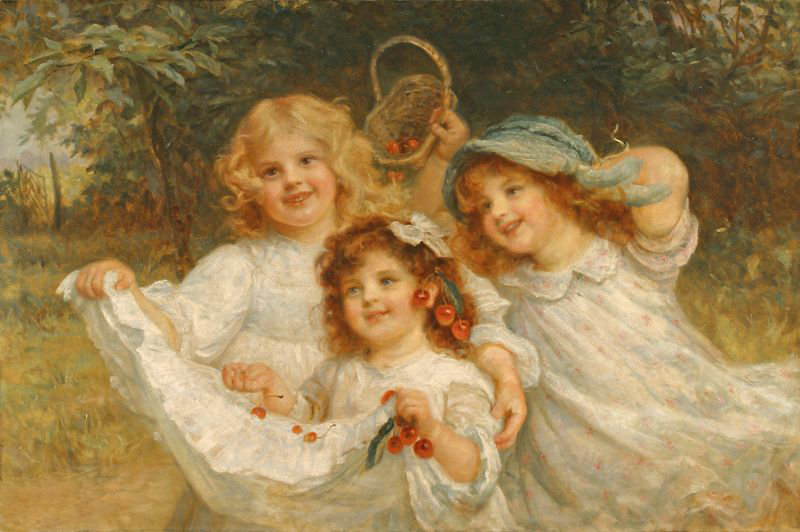 But mostly cherries were just colorful eye-catchers that helped to emphasize the vibrancy and ruddy healthiness of youth . . . 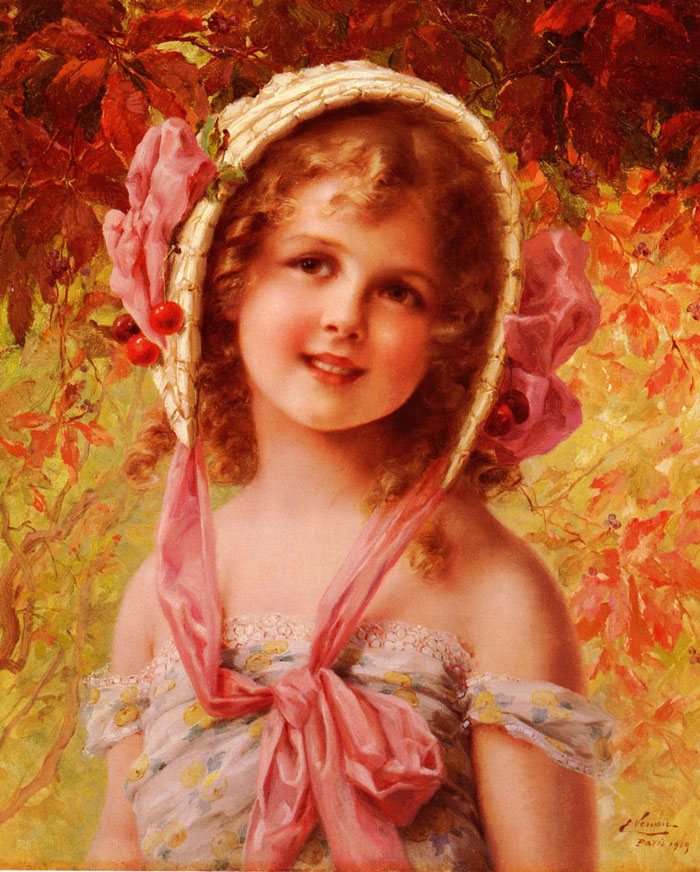 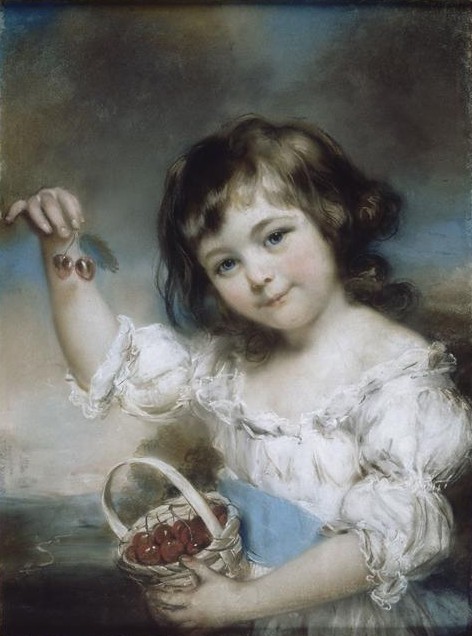 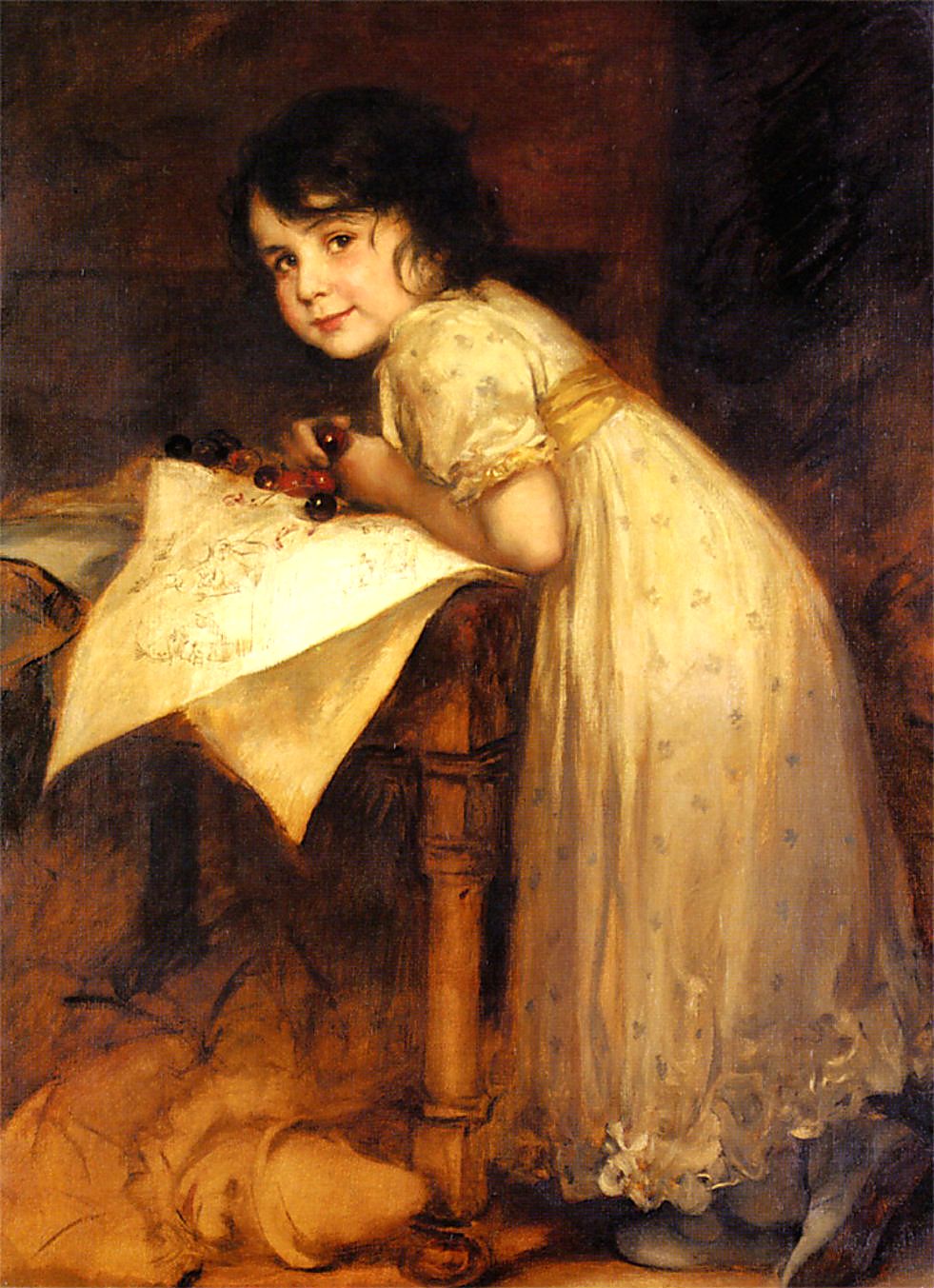 Finally, a couple of curious contemporary artworks in which girl meets fruit; to be honest, I’m not sure exactly what to make of these. 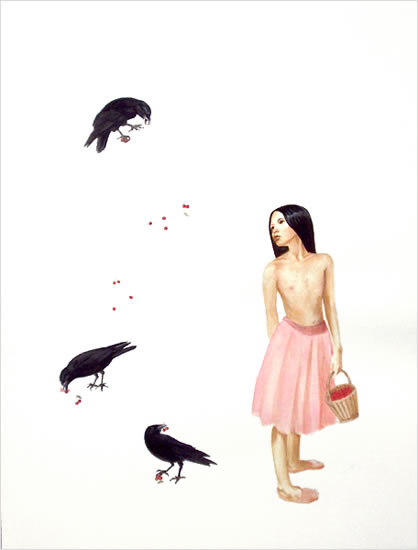 I will say one thing about this final piece: Pay attention to how the little nude girl unwittingly mimics the lithe erotically posed woman in the magazine her mother is holding. 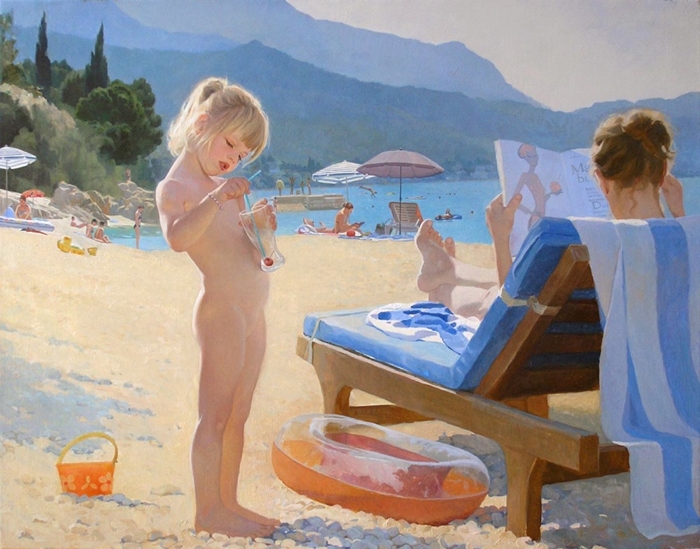