While looking for information about another artist, I did a reverse image search and found this painting of a nude child being passed out of a window. I was intrigued by the unusual topic of this painting, Rescued from the Plague, which is quite different form other nude paintings that were popular in the late nineteenth and early twentieth centuries. Rescued from the Plague was painted in 1898 by Frank William Warwick Topham. According to this article by art critic Sherry Ross, it was a time when British artists were working to make the nude more acceptable to the public. Ross wrote that artists were “…pushing boundaries and often creating great art. To use the nude body in ways never allowed before in history, and yet to accomplish this without seeming either prudish or pornographic…” 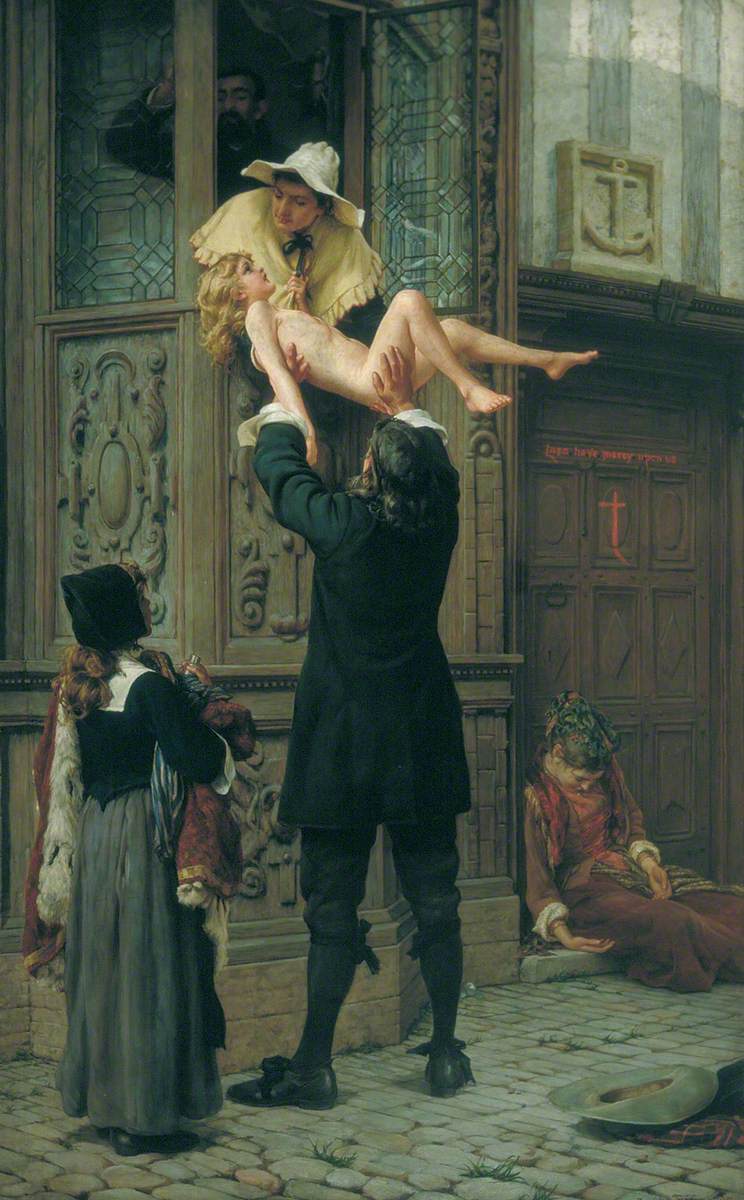 Classical mythology, orientalism, fairies, and historic people such as Lady Godiva were used as excuses for painting nudes so often that by the 1890s it may have been getting hard to find on original topic for a nude painting. Folklorist Charles Godfrey Leland implied in 1891 that artists seem to be exhausting excuses for nudes, and may consider bizarre folk rituals as inspiration for paintings of naked girls (see Gypsy Sorcery and Fortune Telling, page 135). Topham found a historical story that inspires a unique painting without being too strange.

Frank W. W. Topham was born in London, England in 1838. His father, Francis W. Topham, was an artist noted for his watercolor paintings. Frank traveled widely in Europe, especially in Italy with his father and other artists. Topham began exhibiting his paintings at the Royal Academy in England in 1863 and became well-known for his detailed historical works. The original version of Rescued from the Plague is an oil painting, 72 inches by 45 inches, and illustrates an incident described in Samuel Pepys’ diary.

An epidemic of bubonic plague ravaged London in 1665, and approximately a quarter of the city’s population died. Pepys recorded the following story in his entry for September 3 of that year:

Among other stories, one was very passionate, methought, of a complaint brought against a man in the town for taking a child from London from an infected house. Alderman Hooker told us it was the child of a very able citizen in Gracious Street, a saddler, who had buried all the rest of his children of the plague, and himself and wife now being shut up and in despair of escaping, did desire only to save the life of this little child; and so prevailed to have it received stark naked into the arms of a friend, who brought it (having put it into new fresh clothes) to Greenwich; whereupon hearing the story, we did agree it should be permitted to be received and kept in the town. 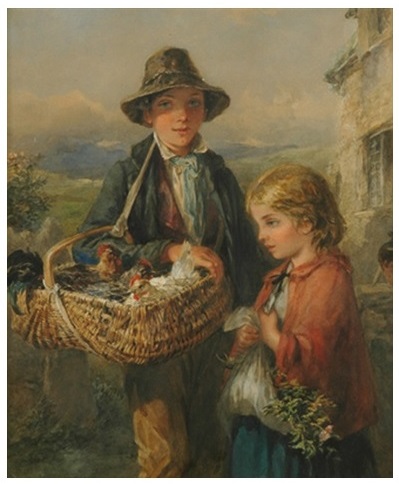 When I saw the image, I assumed the child was a girl, but the story as recorded by Pepys does not tell us whether the child was a boy or a girl, nor does it indicate the age of the child. The sex of the child in the painting could not be determined by the genitals, because they are not shown. The child is too young to discern the sex by secondary sex characteristics. The clothing for the child, presumably held by the girl standing in the left part of the painting, cannot be identified as a girl’s or a boy’s clothing. The child was naked, I assume, because it was feared that clothing in the house was infected with plague. According to bloshka.info, both males and females wore long hair in 1665, therefore the hair cannot be used to determine the child’s sex. Perhaps because Pepys does not specify the sex of the child, Topham also decided not to make it too obvious. Nevertheless, I believe that the child in Rescued from the Plague is a girl due to the general feminine appearance, especially of the face. 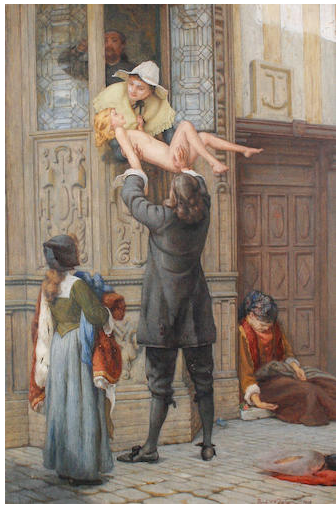 Topham kept this painting for over twenty years, then donated it to the Guildhall Art Gallery, City of London in 1919. It’s a beautiful painting, and I believe that he could have sold it if he wanted. Perhaps he kept the painting so long, then presented it to a prestigious gallery because he liked the painting and was proud of it. That would also explain why he painted a copy of Rescued from the Plague in watercolor in 1919. The watercolor is brighter than the original oil painting, and there are a few other minor differences.