A few weeks ago my friend Chris recommended Wilhelm Reich’s The Mass Psychology of Fascism. I didn’t know of the book but Reich’s name sounded familiar. I looked on my bookshelf and found Reich’s Character Analysis that I had inherited from another friend who had passed. I had not read the book yet, but once I started, I became fascinated by his work. Reich’s psychology challenges the trends in culture which deny the wholeness of the person; mind, heart and body. Friedrich Nietzsche recognized the modern asceticism when he wrote, “To the despisers of the body will I speak my word. I wish them neither to learn afresh, nor teach anew, but only to bid farewell to their own bodies,—and thus be dumb.”

Wilhelm Reich (1897–1957) was an Austrian-born student of Sigmund Freud’s. He was one of the most radical and controversial figures in the history of psychiatry. He coined the term “sexual revolution” and it seems his writings were at the height of popularity during the 1960s. Reich used Freud’s framework for the development of his theories. However, Reich did not accept Freud’s assumption that a child’s impulses were primarily anti-social which were in need of repression in order to maintain social stability. Reich came to the conclusion from his treatment of his patients that the mechanized organization of civilization was the main cause of the psychic disturbance in modern society. 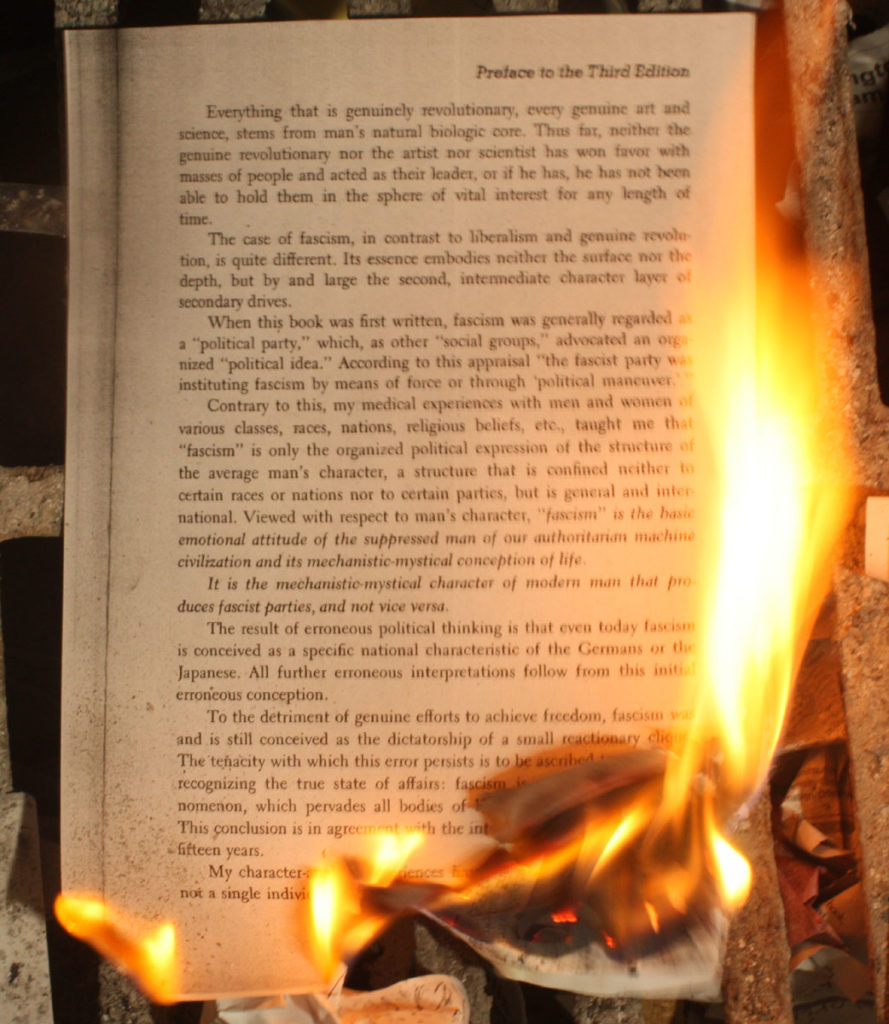 Burning The Mass Psychology of Fascism

Reich worked in Germany in the early 1930s as the Nazis came to power. Although Reich was active in socialist organizations in Germany, he thought Marxist analysis was not adequate to account for the rise of Fascism. I believe Reich’s understanding of fascism is his most important contribution. Fascism should not be regarded as a political party which had formed authoritarian states in Germany and Italy, rather fascism is the manifestation of the irrational attitude of the suppressed individual in machine civilization. What is of great interest, is the cause of the neurotic fascist character. Reich was certain that the sexual repression of the child destroyed the individual’s ability to resist authoritarianism. Reich wrote:

When the patriarchal organization of society began to replace the matriarchal organization, suppression and repression of genital sexuality in children and adolescents were the principal mechanisms used to adapt the human structure of the authoritarian order. The suppression of nature, of “the animal” in the child, was and has remained the principal tool in the production of mechanical subjects. Society’s socio-economic development has continued its mechanical course until today in an independent way. The basis of all ideological and cultural formations developed and branched out hand in hand with the socio-economic development: “Away from geniality” and “away from the animal.”

I felt the need to bring attention to Reich’s work to the Pigtails community, without being aware of it, Pigtails has challenged the collective superego of fascism. The psychodynamic mechanism of repression caused the Nazis to project their self-hatred onto the Jews. The projections of the contemporary corporate culture are more directly related to the source of its repression, since the neurotic culture projects its hatred onto the new shadow monster: the pedophile.

Reich’s view of sexuality was not the only radical position he held. He also thought that cancer was caused by the neurotic repression of libido energy he called “orgone”. In 1940 he began to build “orgone accumulators,” for his patients to sit in which he claimed were “definitely able to destroy cancerous growth.” The FDA did not agree, Reich was accused by the government of being a medical fraud. His orgone accumulators were seized and destroyed and six tons of his books, journals and papers were burned. Reich died in a prison cell in Lewisberg, Pennsylvania in 1957. In his will, he established the Wilhelm Reich Infant Trust to safeguard his legacy and ensure access to his work. 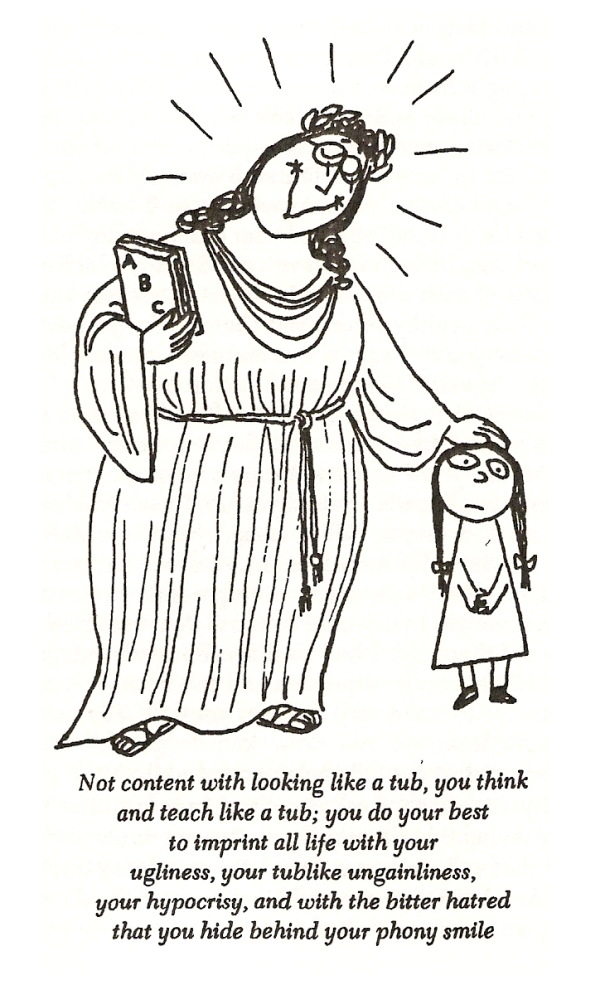 Before I was able to find a copy of the The Mass Psychology of Fascism, I checked out Listen, Little Man! from the library. Reich wrote the text in the summer of 1946 to express his grief over the state of the “little man” but had no intention to publish it. However, his supporters recognized the value of Listen, Little Man! for the understanding of Reich’s philosophy. Below is a passage from the book, such frankness today is regarded as simply politically incorrect:

Little woman, if without any particular vocation you drifted into teaching merely because you had no children of your own, you’re doing unconscionable harm. You’re supposed to be bringing up children. The rearing of children, if taken seriously, implies the correct handling of their sexuality. In order to handle a child’s sexuality correctly, one must know from one’s own experience what love is. But you’re built like a tub, you’re awkward and physically repulsive. That alone is enough to give you a bitter, deep-seated hatred for every attractive, living body. Naturally I don’t blame you for being built like a tub, or for never having experienced love (no healthy man could have loved you), or for failing to understand love in children. But I do blame you for making a virtue of your affliction, of your wrecked, tublike body, of your lack of beauty and grace and your incapacity for love, and for stifling love in children. That, you ugly little woman, is a crime. Your existence is harmful because you turn healthy children against their healthy fathers, because you treat healthy childlike love as a symptom of a disease, because, ugly little woman, not content with looking like a tub, you think and teach like a tub; because instead of withdrawing modestly into a quiet corner of life, you do your best to imprint all life with your ugliness, your tub-like ungainliness, your hypocrisy, and with the bitter hatred that you hide behind your phony smile.

I’d love to read the above passage in a feminist studies program but if I dared to, I would certainty need to wear full riot gear! Reich’s idea of education seems to reflect the view of Plato and Rousseau, they thought that education should flow through the sense, the limbs and muscles, and not primarily through the faculty of abstraction. As Sir Herbert Read put it,”education must be through arts, through gymnastics, through creative play of all kinds; it must be under the patronage of Dionysus rather than Apollo.”

Reich recognized that children should be allowed to express their innocent sexuality, otherwise the repression would likely be distructive to their ego. Today, the alienation from human nature has progressed to the point that a 9-year-old boy may face sexual harassment charges for passing a love note in class. I believe Reich hit on the neurosis of many postmodern feminists, since many of the troubled souls have never experienced genuine romantic love, they take vengeance in political and aesthetic forms of sadism. The little women ban Valentine’s Day in school but claim it was done in respect to political correctness. They remove a painting of nymphs from a museum and claim it was done to “prompt conversation”. Estranged from their biological core, the little women certainly hate pigtails. 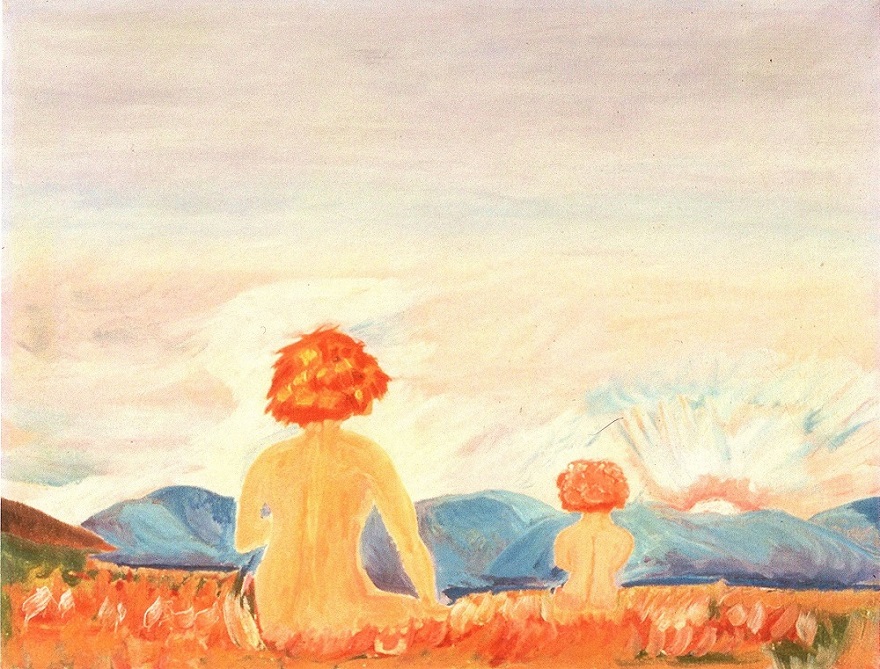 I wish Reich had not used the term “sex” so much in his writing since it led to a vulgar misunderstanding of his intentions. I believe Reich was endorsing an environment for children to nurture a love of life in which sexuality would be included since it is a part of life. Reich did some painting as a hobby, his picture Children reflects a reverence for life.

I was writing an article on the artist Mary Cassatt when my friend recommended Reich’s book to me. The cold academic indifference to Cassatt’s warm paintings of mothers and children prompted me to apply Alice Miller’s insights in child rearing and alienation. Miller was a Swiss psychologist who had a profound understanding of the “soul murder” of the child in the authoritarian state, her account of the psychology of fascism parallels the work of Reich. My article “Mary Cassatt: Nurturing the Soul” can be found here.

Although I appreciate Susan for bringing this philosopher-psychologist to the readers’ attention, I feel it important to inform readers that Pigtails in Paint does not espouse the ideas of Reich in full.  Reich, like many of us at Pigtails, trusted his instincts that there is something neurotic about society and that one of the keys to that is the bizarre way we indoctrinate children regarding their sexuality.  The flaw in Reich’s pedagogy, apart from his lack of tact and oversimplification, is how strongly he adhered to Freudian theory.  Freud is a problematic character; on the one hand, he was a kind of genius, but in his rational explanation of his ideas, he comes off as a kind of crackpot.  He did not realize, as Carl Jung did, that the subconscious mind does not conform to rational explanation.  What we should be advocating is a balance between our animal spirits and our reasoning mind.  The two should work in accord to mitigate the pressures that lead to neurosis and psychosis, both individually and in civilized society as a whole.  Healthy men and women both need a way to express their humanity that is not dependent on their presumed reproductive imperatives.  -Ron