In the year 1500, Pedro Cabral became the first European in recorded history to visit Brazil. He seemed particularly impressed by the beauty of the Indian girls he encountered, and he wrote,

The translation, according to Alessandro Zir is,

In that place, three or four young women walked among them, very young and very heathen, with very black hair, long to the shoulder blades, and their shames so high, so shut, and so cleaned from hair that, so well we look at them, we felt no kind of shame.  -Luso-Brazilian Encounters of the Sixteenth Century, a styles of Thinking Approach by Alessandro Zir, Fairleigh Dickinson University Press, 2011

The word vergonhas, which he translates as shame, was a euphemism for genitals. Four hundred years later, the Indian girls of tropical South America became a favorite subject for photography. The first photo is of two girls of the Canela tribe in Brazil. The photograph, taken between 1908 and 1946, is from the Coleção Etnográfica Carlos Estevão de Oliveira of the Museu do Estado de. Pernambuco.

These Okaina girls were photographed by Thomas Whiffen in 1914 in either Peru or Colombia.

This photo is of a South American dance. It was published in The Secret Museum of Mankind in 1935. 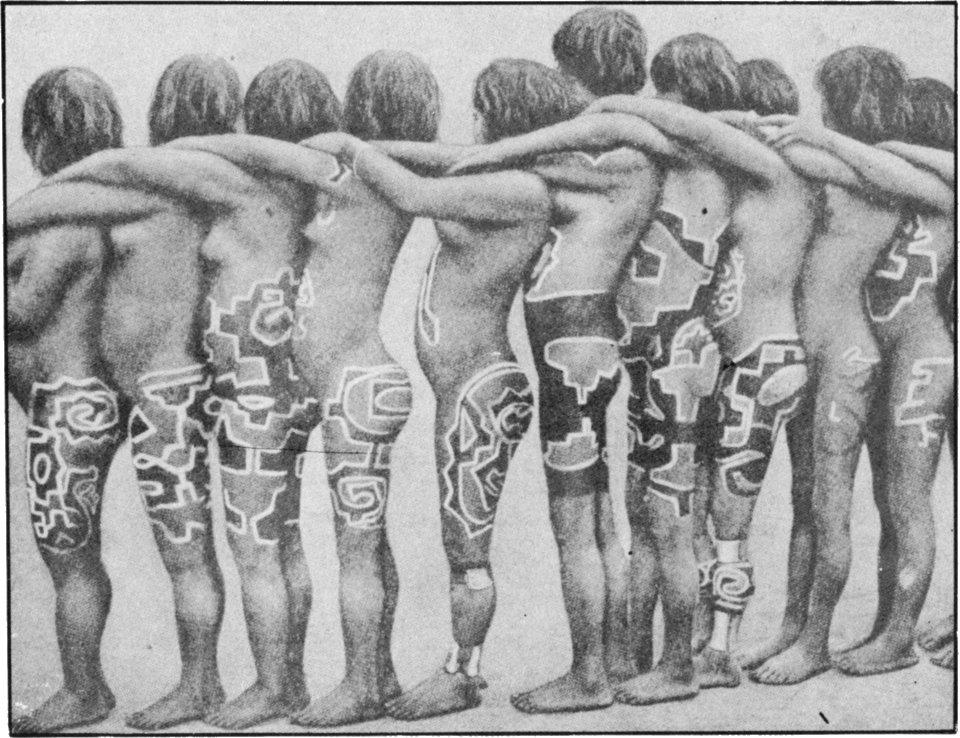 Indian girls impressed early European visitors to North America as well. William Strachey, secretary for the Jamestown colony in Virginia wrote, in 1612, an account of Pocahontas coming to Jamestown naked and turning cartwheels with the boys of the colony:

Pocahontas a well-featured but wanton young girle . . . sometymes resorting to our Fort, of the age then of 11, or 12 yeares…would gett the boyes forth with her into the markett place and make them wheele, falling on their hands, turning their heeles upwardes, whom she would follow, and wheel so herself naked as she was all the Fort over . . . .

Although Pocahontas has been a subject of several artists, she is usually depicted as older and fully clothed.

A statue of a young Pocahontas stands in Gloucester County, Virginia. The sculpture by Adolf Sehring was completed in 1994. This photo is from a postcard by Michelle Harbour. 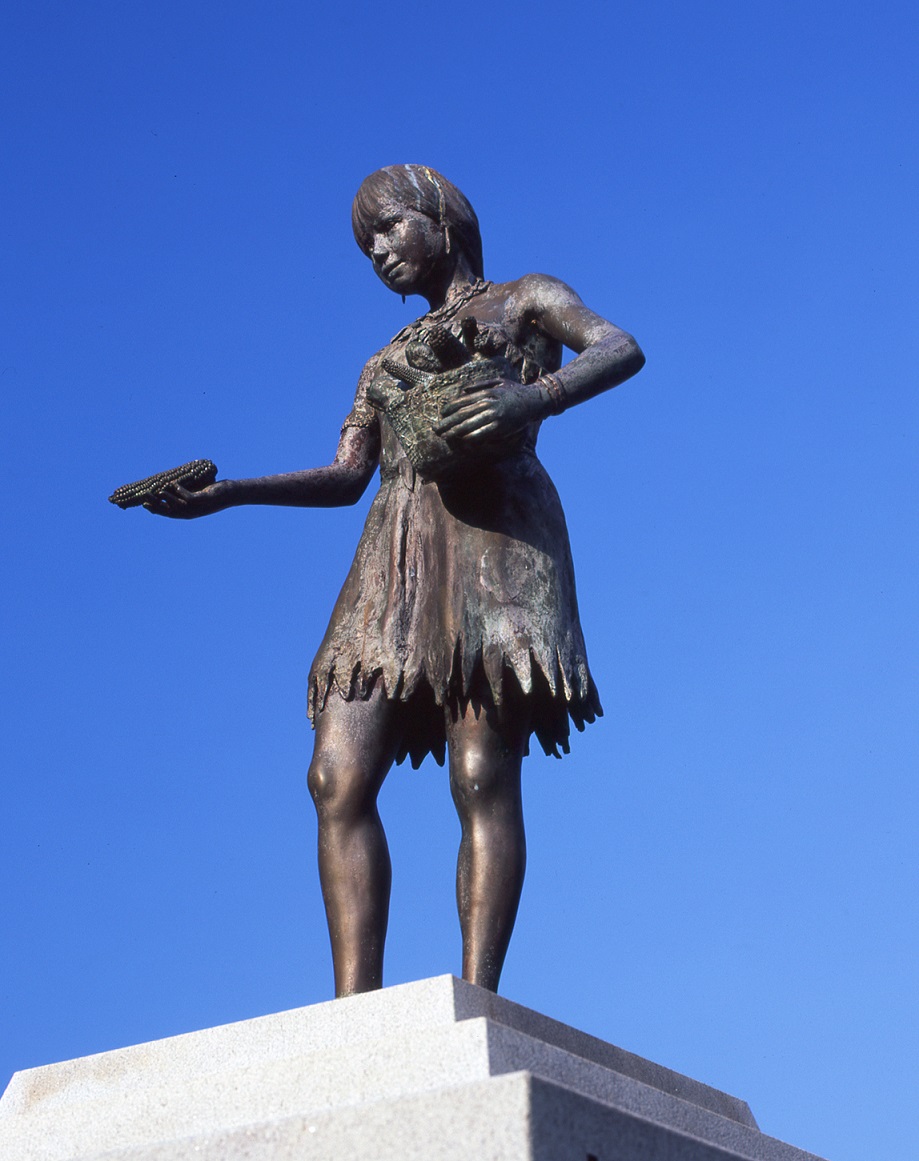 David McFall made a nude statue of Pocahontas Pocohontas La Belle Sauvage in 1955. However, Pocahontas appears to be about 20 years old in this statue.

In Letters and Notes on the Manners, Customs, and Conditions of North American Indians
by George Catlin, first published in London in 1844, Catlin writes of his visit to the Minataree Indian village on the Upper Missouri River. He wrote:

In this manner we were conveyed to the middle of the stream, where we were soon surrounded by a dozen or more beautiful girls, from twelve to fifteen and eighteen years of age, who were at that time bathing on the opposite shore.

They all swam in a bold and graceful manner, and as confidently as so many otters or beavers; and gathering around us, with their long black hair floating about on the water, whilst their faces were glowing with jokes and fun, which they were cracking about us, and which we could not, understand.

In the midst of this delightful little aquatic group, we three sat in our little skin-bound tub (like the “three wise men of Gotham, who went to sea in a bowl,” &c.), floating along down the current, losing sight, and all thoughts, of the shore, which was equi-distant from us on either side; whilst we were amusing ourselves with the playfulness of these dear little creatures who were floating about under the clear blue water, catching their hands on to the sides of our boat; occasionally raising one-half of their bodies out of the water, and sinking again, like so many mermaids.

Catlin was a pianter, but unfortunately did not paint a picture of this incident.

The anthropologist Frederick Starr photographed this girl in Silao, Mexico, while doing research among the Indians in 1896. The image is scanned from the book Partial Recall, edited by Lucy R. Lippard (1992). 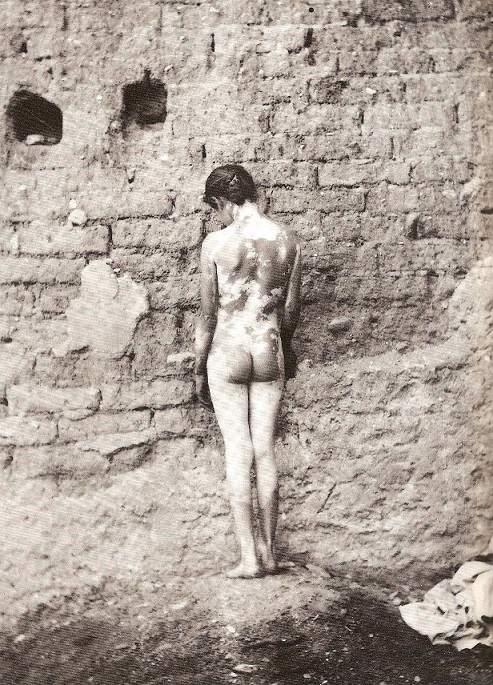 Frederick Monsen was born in Norway in 1865. He immigrated to America, and became a photographer. He accompanied the Army on the expedition that captured Geronimo in 1886. He is best known for his early 20th century photographs of Indian life in the southwestern United States. The first two images were photographed in about 1907. 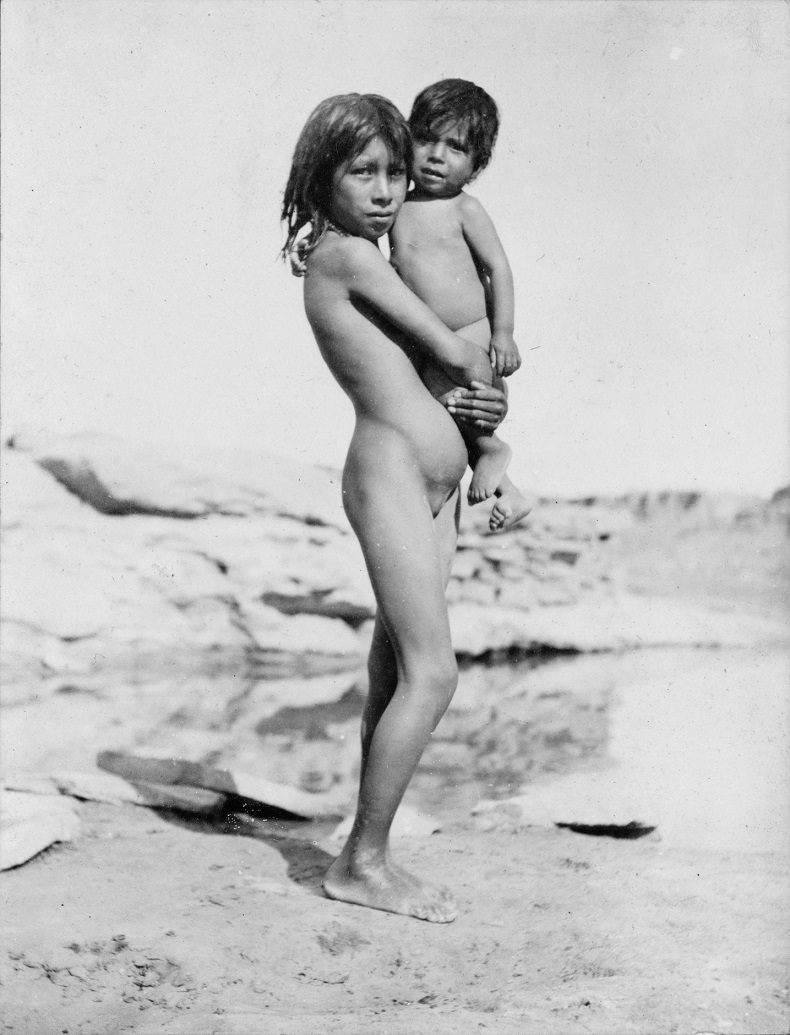 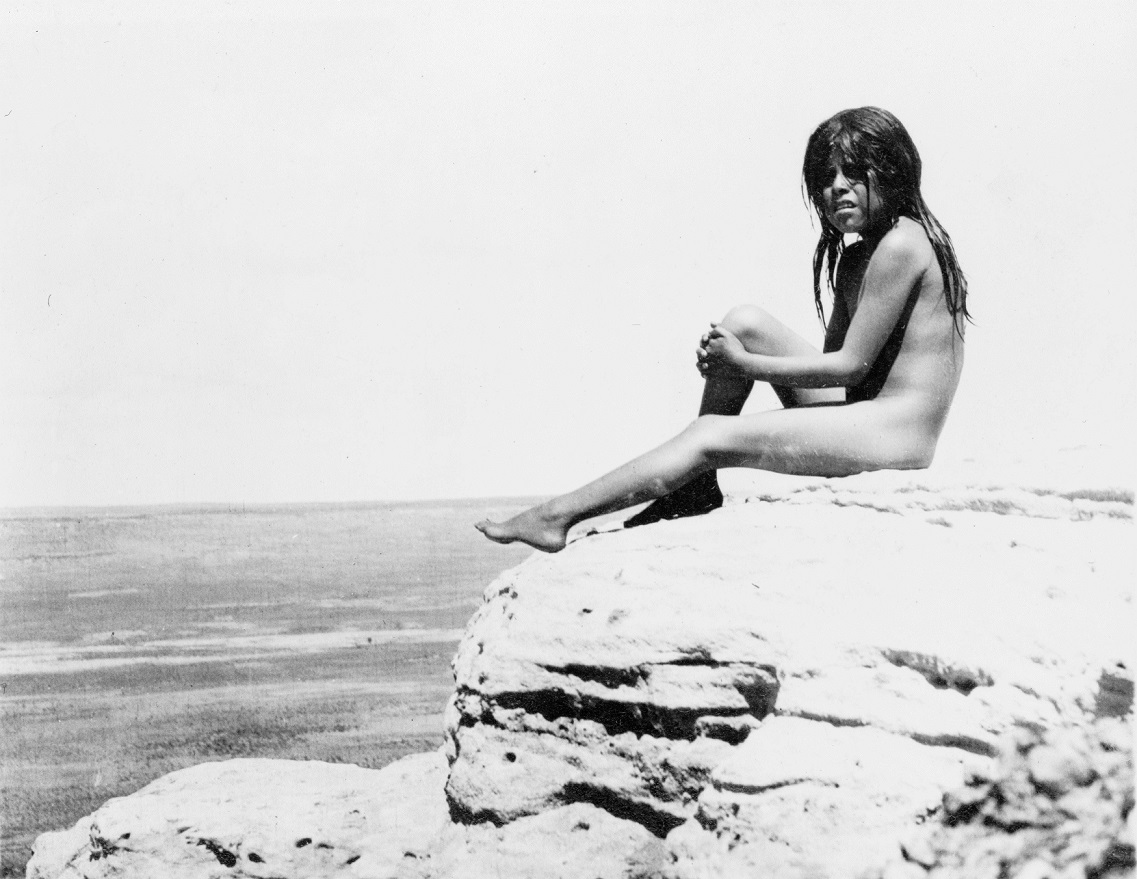 The third image by Monsen was taken in about 1890, and was published in National Geographic in 1921. 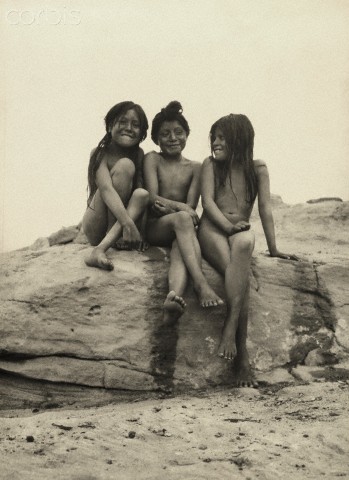 Frederick I Monsen – Three naked, Hopi girls sit together on a rock ledge (circa1890)

The photo of this Hopi girl is by Edward Curtis.  Curtis (1868–1952) is one of the most famous photographers to specialize in American Indians.  He began photographing Indians in 1895.  In 1906, J.P. Morgan financed a project to photograph and document as much of the remaining traditional Indian culture as possible. 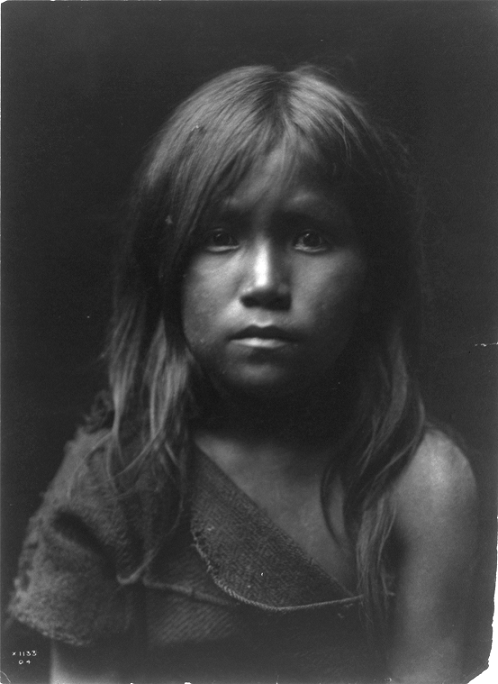 The next two photos are of Kiowa girls, both from the early 20th century or late 19th century. 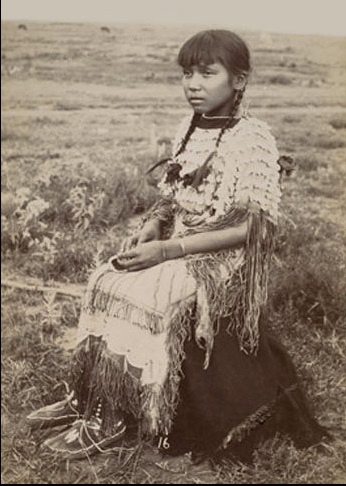 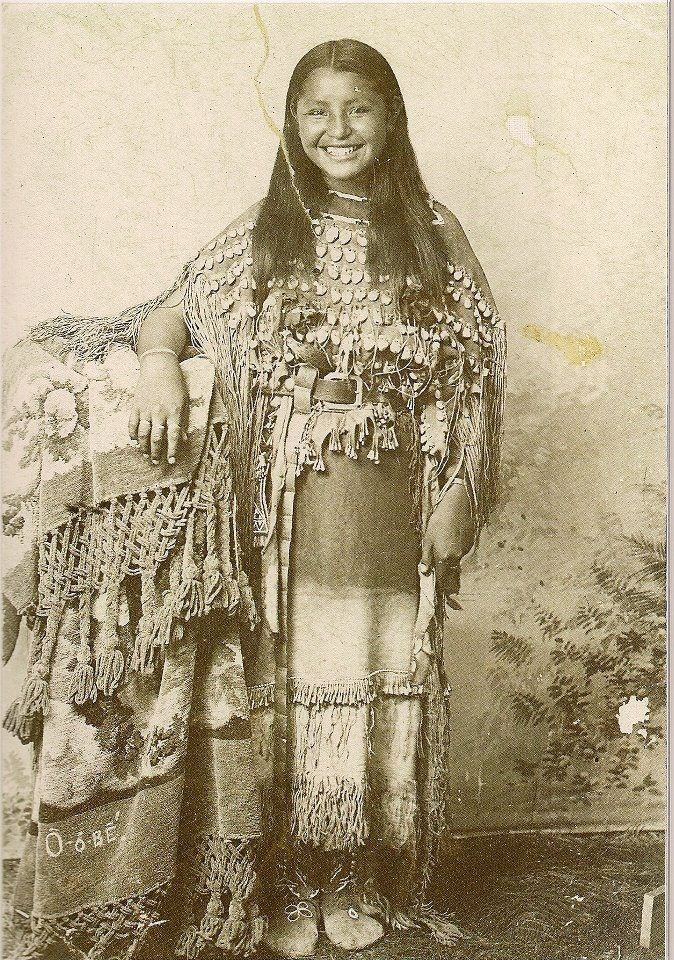 A photo of an Apache girl. 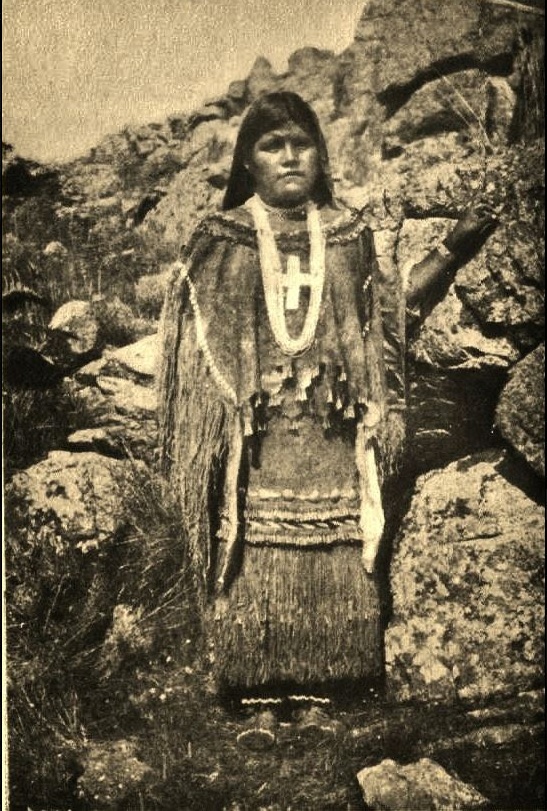 The next photo is from the cover of a book about Cynthia Ann Parker, a white woman captured by the Comanche Indians.  I could not identify the photo or the photographer, but it is not a photo of Cynthia Ann Parker herself.  It is possible that it is her half-Indian, half-White daughter, but that would only be speculation. 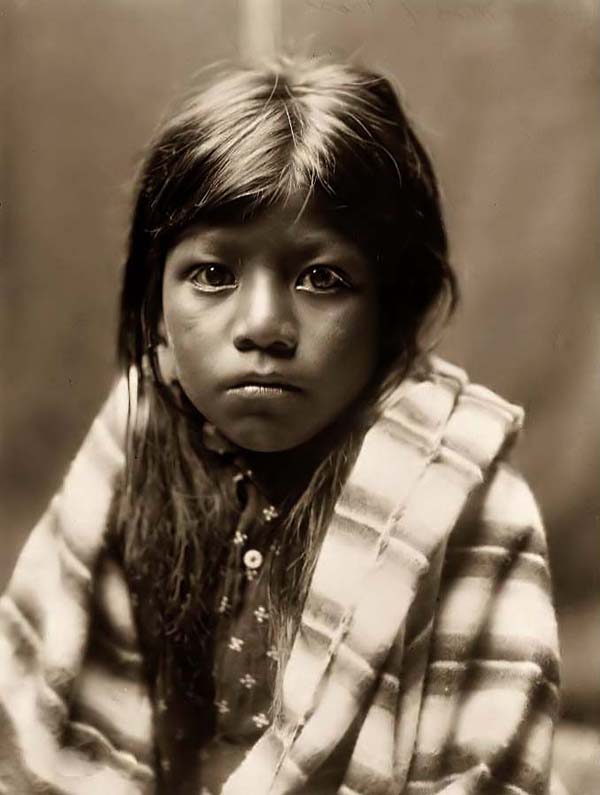 Although documenting the photographers and dates of these photos on the internet is difficult, it is our hope that a reader who is expert on South and/or North American Indians might come forward with more definitive information.  -Ron