Adelchi Riccardo Mantovani was born in Ro, Italy in 1942. He worked as a machinist before his career as a professional artist. In 1966 Mantovani moved to Berlin, Germany, and attended painting classes in his spare time. Mantovani wrote in his autobiography, “… since I was a child I have always felt the urge to translate thoughts and fantasies in images “. His first exhibition was in 1977, and he then devoted himself entirely to painting. His painting is inspired by Italian Renaissance painters in style, and to a lesser extent in subject matter. Viewing his paintings, I am reminded of Fra Angelico in his clear, realistic style and formal poses. Mantovani’s web page is here. It is worthwhile to visit and view more of his paintings. 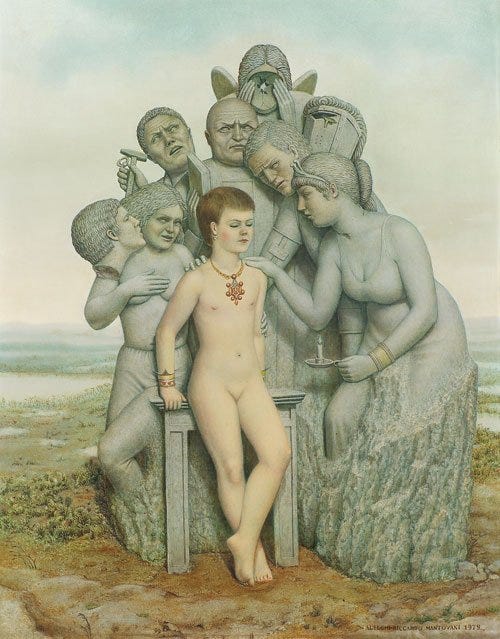 Vogliamo Solo il Tuo Bene (We only want what’s good for you.) was painted in 1979. The statues are apparently advising the young girl, wearing only jewelry, about what is good for her. I could guess at further interpretation of this painting, but since I would only be guessing, I will leave it up to the reader to interpret the painting. Childhood is a recurrent theme of Mantovani. Many of his paintings feature children, especially girls. 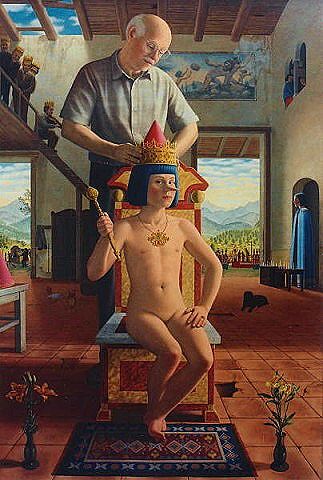 L’apoteosi di Pinocchia (The apotheosis of Pinocchia), painted in 1992, features a young girl as Pinocchia rather than the customary boy Pinocchio. The scene is reminiscent of a Renaissance painting, although the man is in modern dress. Inclusion of strange details in the background is typical of Mantovani. I assume these details are significant, but can offer no theory of their meaning.

La Nascita Sensazionale di Venere (The Sensational Birth of Venus) is Mantovani’s version of a theme popular with Renaissance painters. In mythology, Venus is said to be born from the foam of the sea, and usually a humanoid mother is not involved, as in this painting. Above Venus is a honeycomb shaped like a heart. This “Wax Heart” is the subject of another painting (Il Cuore di Cera) by Mantovani. He often includes in his works allusions to other of his paintings. 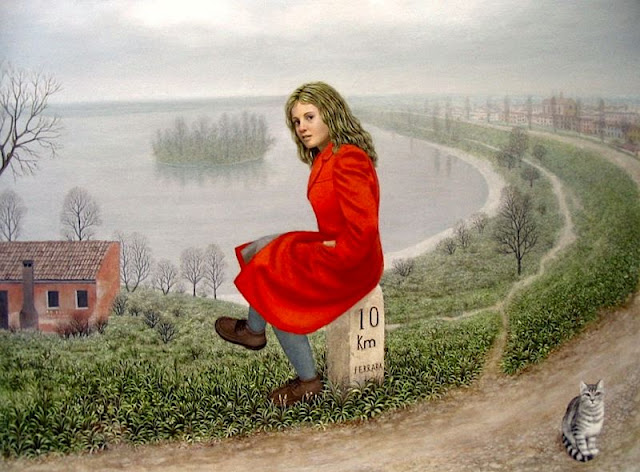 Il Paletot Rosso (The Red Coat) is the least surreal of the paintings in this post, yet it still evokes the feeling that there is more than meets the eye. The girl sits ten kilometers from Ferrara, in the Italian province where Mantovani was born. The cat in the lower right is frequently seen in Mantovani’s paintings. This painting is the first to be featured on the artist’s web page. Paesaggio Eroico (Heroic Landscape) depicts the artist when he was ten years old, admired by two girls from a previous painting. The girl on the left is also in L’apoteosi di Pinocchia and other paintings. The details in the background are also from other Mantovani paintings. Note La Nascita Sensazionale di Venere above and slightly left of Pinocchia’s head.

Cupida (the feminine of Cupid) is Mantovani’s version of Amor Vincit Omnia (Love conquers all, from Virgil) painted in 1602 by Caravaggio. In the painting by Caravaggio, Cupid is portrayed as a boy. Cupid traditionally is a boy, but Mantovani puts more emphasis on girls in his art. This is especially true of his nudes. Look at the paintings on the artist’s web page; you will see many female nudes, but all male figures are clothed. 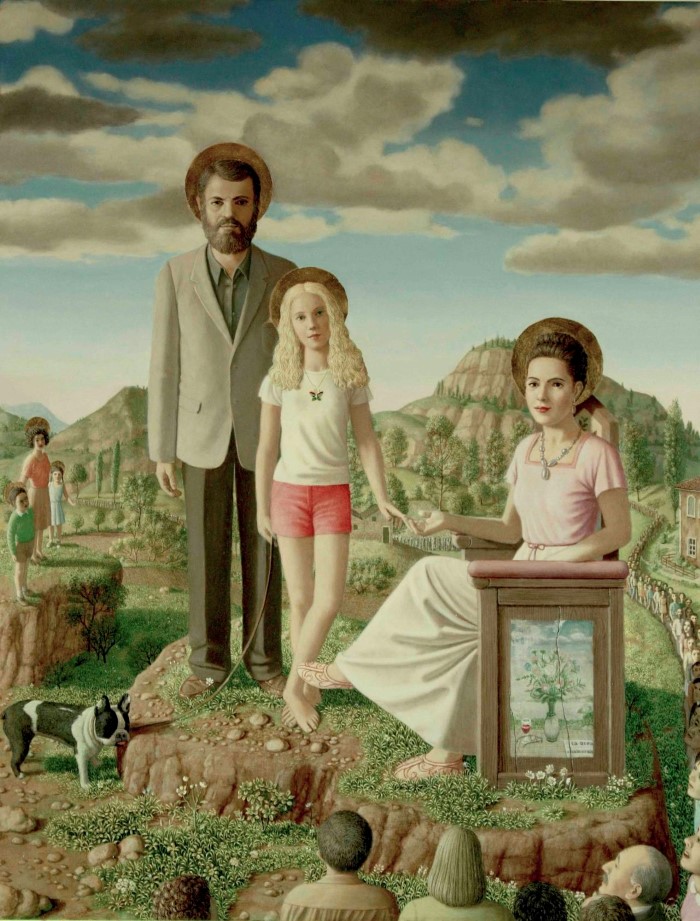 La Sacra Famiglia (The Holy Family) has the appearance of traditional paintings of the Holy Family. Even without the title and the halos, the pose and general background, and the multitude coming to adore them would have brought to mind paintings of Jesus, Mary, and Joseph. Mantovani spent much of his childhood in a Catholic orphanage and boarding school, and it shows in his painting. In this painting however, the child is a girl, and the family is dressed in modern clothing. They also have a dog. None of these details would be accurate for the actual Holy Family. Behind them and to the left is another family of a woman and two children, all with halos. Who are they? 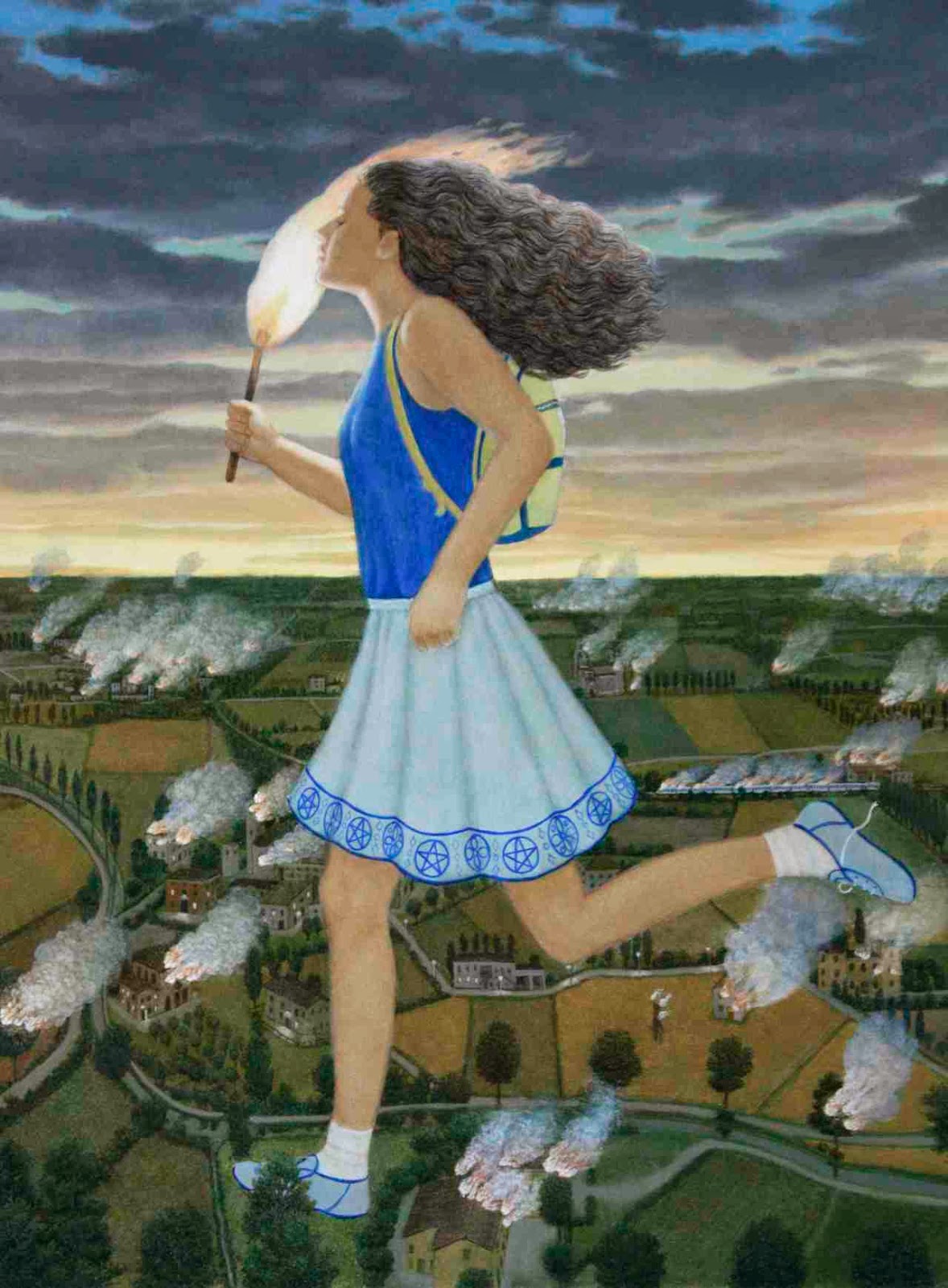 La Vendetta della Strega (The Witch’s Revenge) is the last painting in this article. when I first saw this painting, I had the idea that the girl was floating in the sky, and appeared bigger than the buildings because she was closer to the observer. Then I noticed that one foot is on the ground behind a tree. The girl is a giant; she really is many times bigger than the trees and buildings. Except for the pentacles on the hem of her skirt, there is nothing to indicate she is a witch. It is a mystery, at least to me, for what she is exacting revenge.