In the second part of our series (you can read the first part here; if you haven’t already, I recommend doing so now) we’ll be looking at a few more of the common traits to this work. Let’s get to them, shall we?

(5) Partial or full nudity – As I’ve said before, it may be difficult for Americans to comprehend, living as we do in a society where casual nudity even of very small children is considered highly taboo, but nudity and sexuality are not always coincident. America is actually an anomaly in that regard. We have fetishized nudity by regarding it as inherently sexual, which creates undue problems when it’s a child that’s nude. Thus, nudity in the context of subversive girl art is more potent than it would be otherwise, as these artists are certainly well aware. There are so many good examples of this sub-category that I simply couldn’t limit it to three or four. 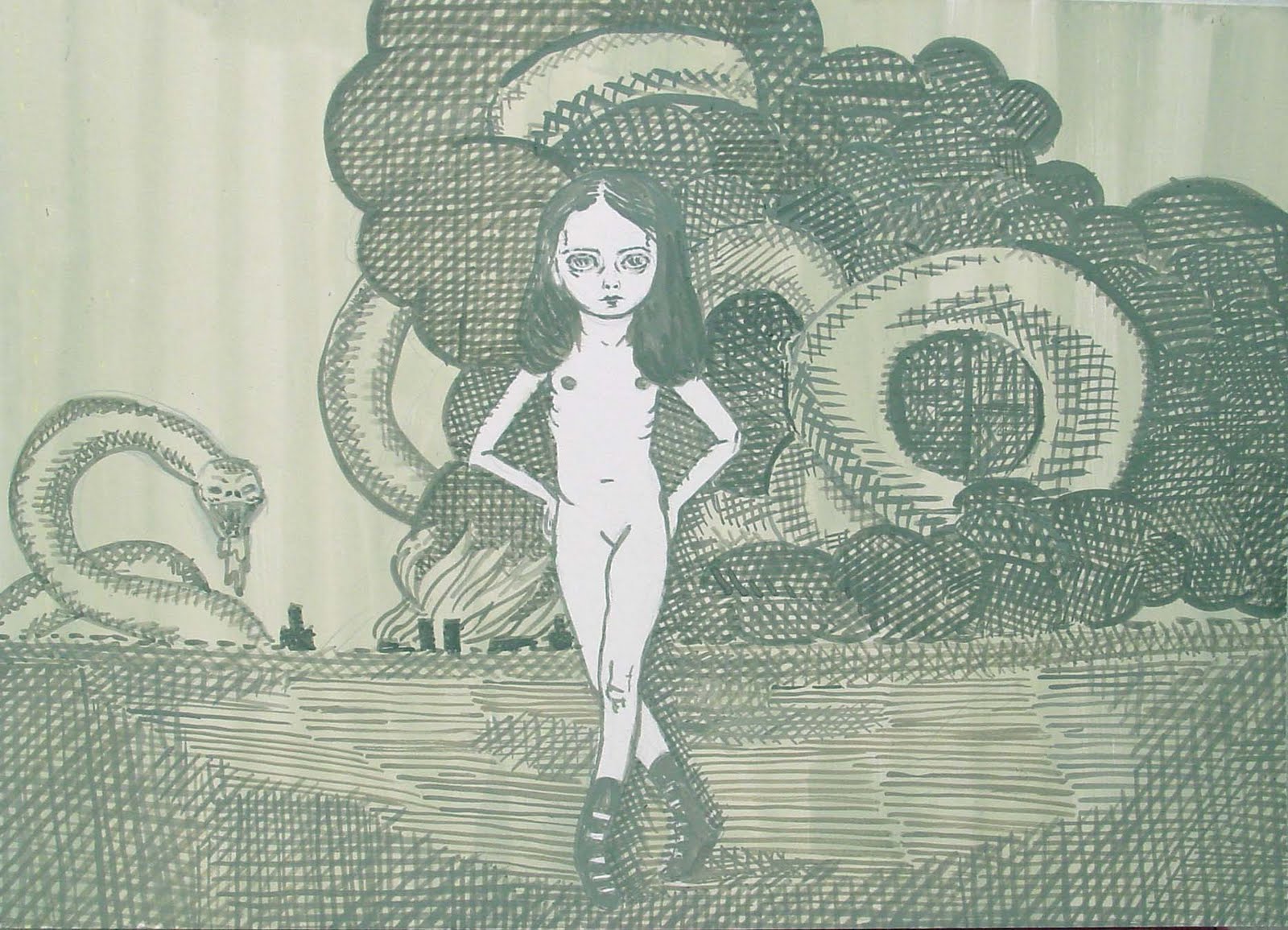 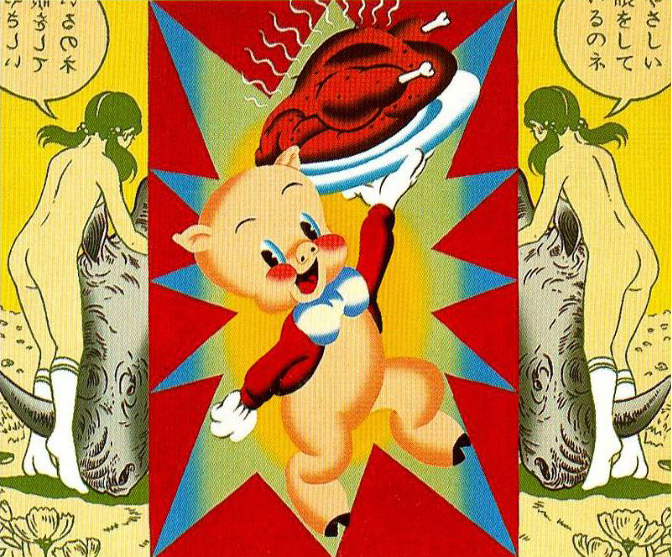 Much of the work of Cornelia Renz—again not a Lowbrow artist, but a sister in arms, so to speak—reminds me in some respects of Henry Darger’s stuff. This piece is a bit unusual for her in that it’s dominated by a single central figure.

Cristina Vergano is not a Lowbrow artist per se, but much of her work would fit naturally into that movement. Incidentally, the Latin phrase at right of the image reads something like “Sweet laughing petty Venus and envious bitch.” The goddess Venus being recast as a child is not new (I’ve done it myself) but it’s always interesting and provocative, given that she is essentially a sex goddess. 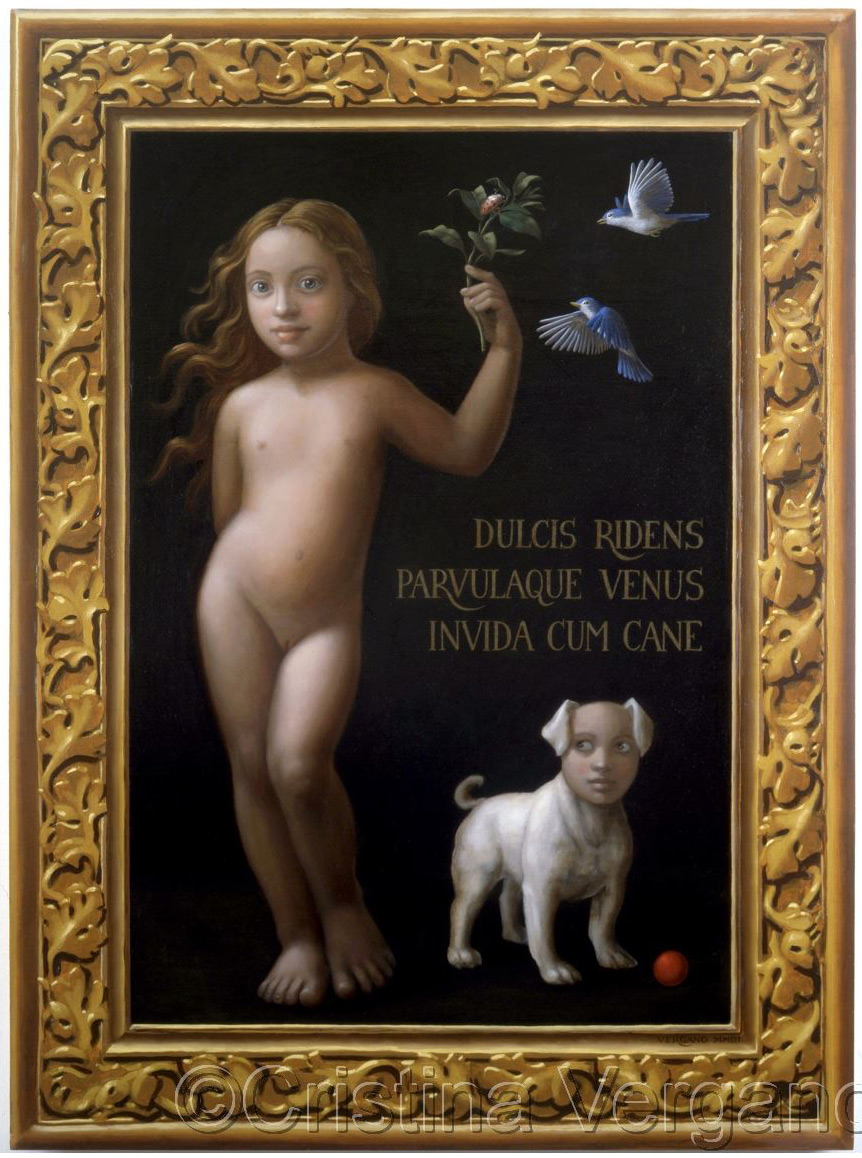 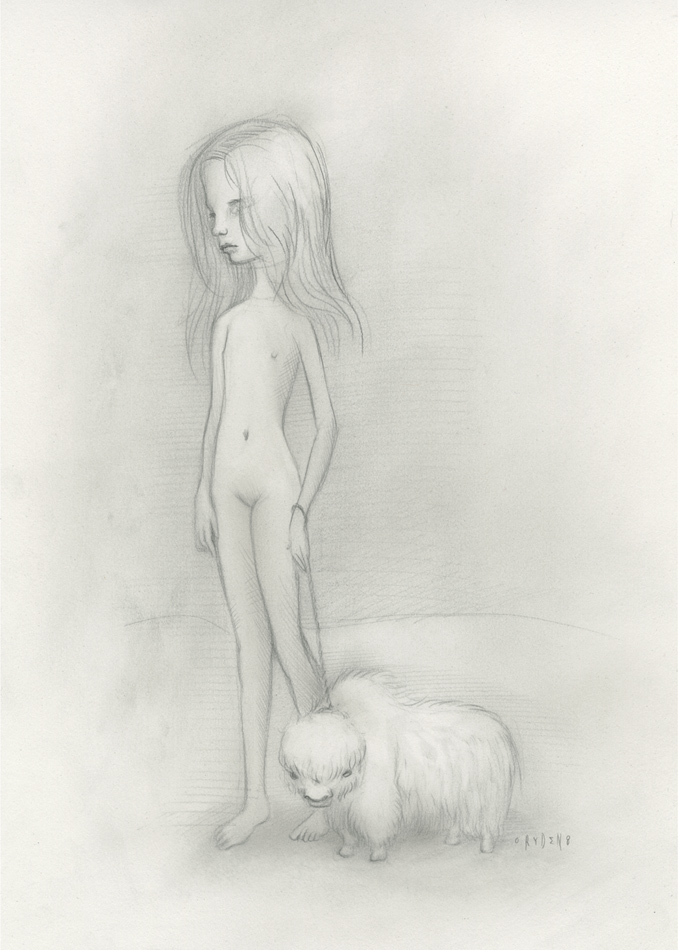 Dariusz Skitek is another artist I’ve featured before on Pigtails. 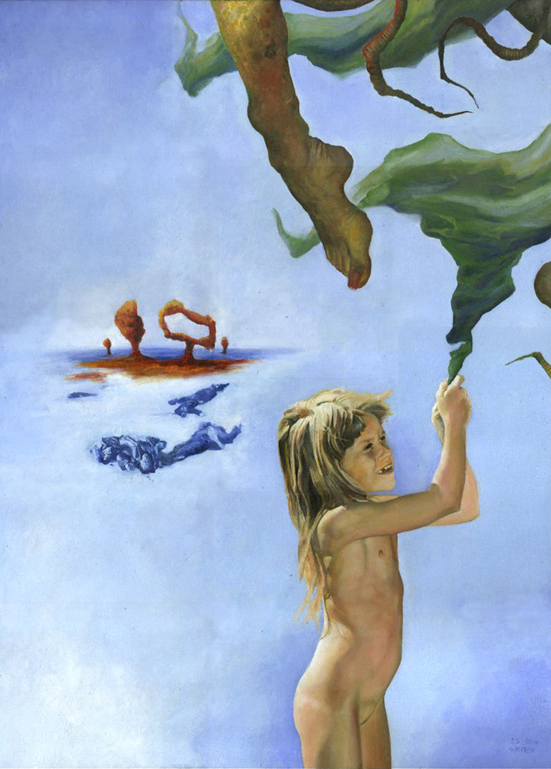 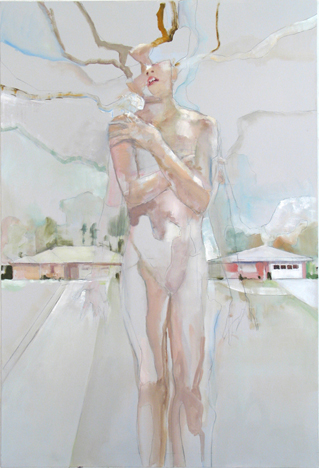 Mike Cockrill (official site) – Cockrill’s website also appears to be getting an overhaul, but for now it’s still available.

There are no angels in her underwear, proclaims the title of this next piece. Well, it’s really no wonder, since she doesn’t appear to be wearing any! 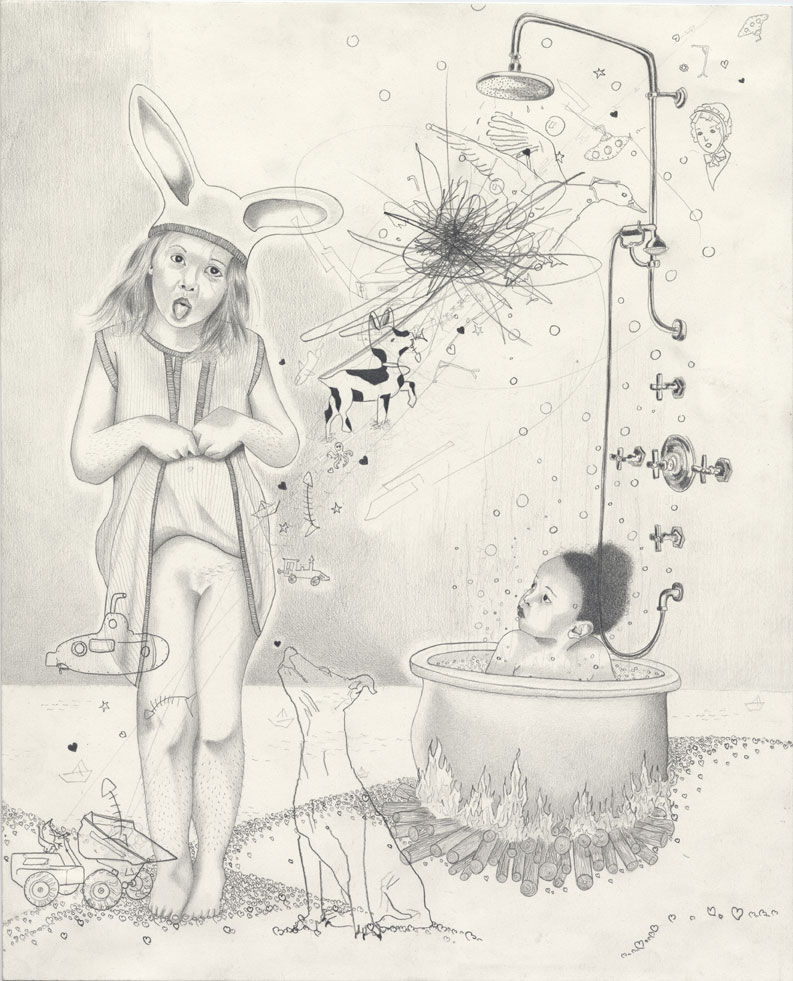 Nils Karsten – No Angel in My Underwear

(6) Aliens or monsters; references to alienness and monstrosity – This goes back to the idea of monsters being the Evil Other, the great existential threat symbolized in strange and terrible forms. In associating them with the eroticized child, the artist is clarifying the danger in following this mental thread too far, and the fear of becoming the monster themselves: the socially reviled pedophile. By projecting it into their work, they effectively distance themselves from it. These images and all their associated weirdness stand in direct contrast to the accepted paradigm. Monsters in themselves define the natural paradigm by being rare and antithetical to it. As the essay What is a monster? at the Cambridge University site makes clear:

It might seem counter-intuitive, but beasts that seemingly mixed the characteristics of different natural groups were not troubling. Rather, they reinforced categories by clarifying the defining criteria for these groups. By transgressing, they helped to determine boundaries. To define a deviant form, such as a ‘deformed’ baby or calf, or a ‘monstrous’ exotic creature, you have to define ‘normal’.

Pedophilia, whether carried out or not, is the consummate modern monster, the most unnatural and deviant of sexualities in the collective consciousness. The desired children must therefore be shown in context with all that we find detestable, including monsters . . . 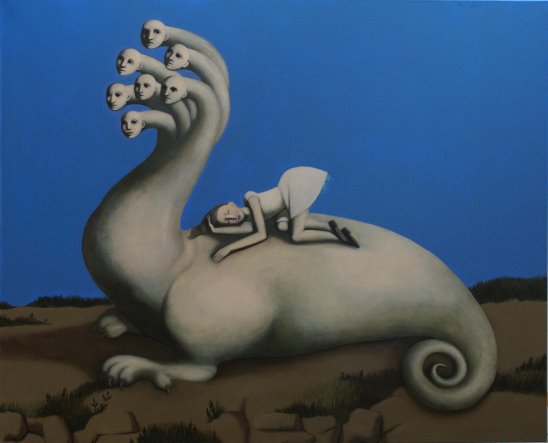 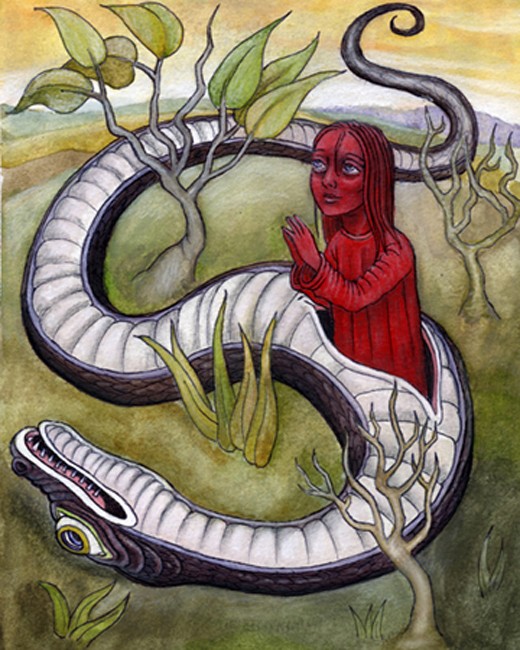 Alex Kuno – The Miscreants of Tiny Town – Sally and the Serpent 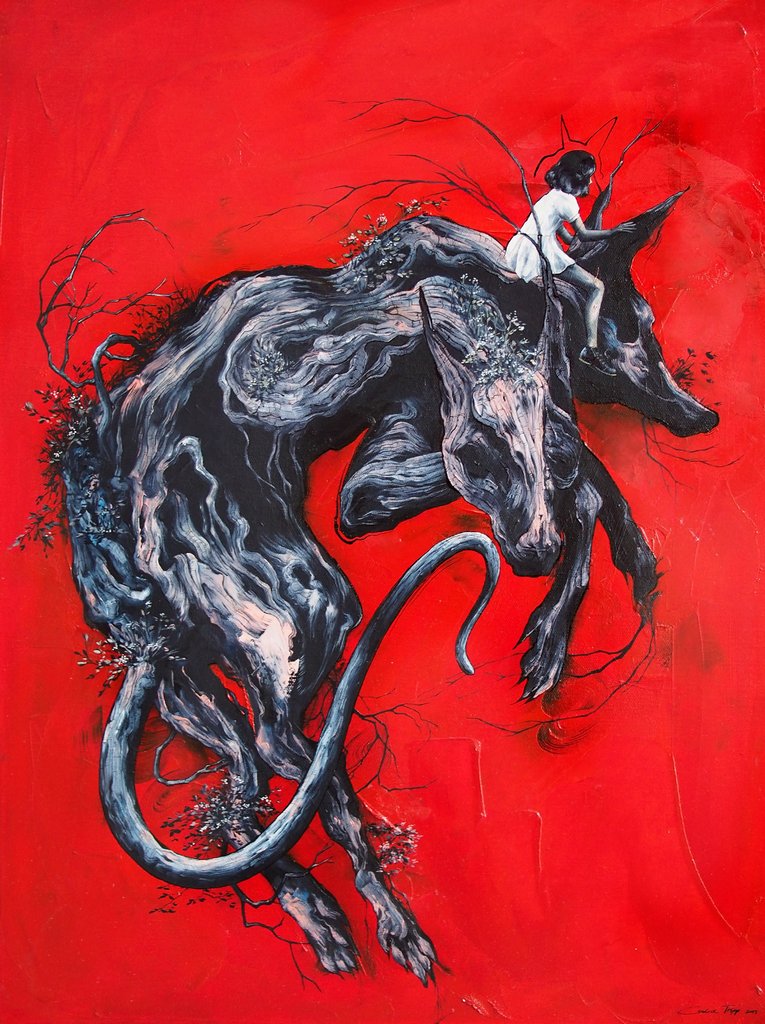 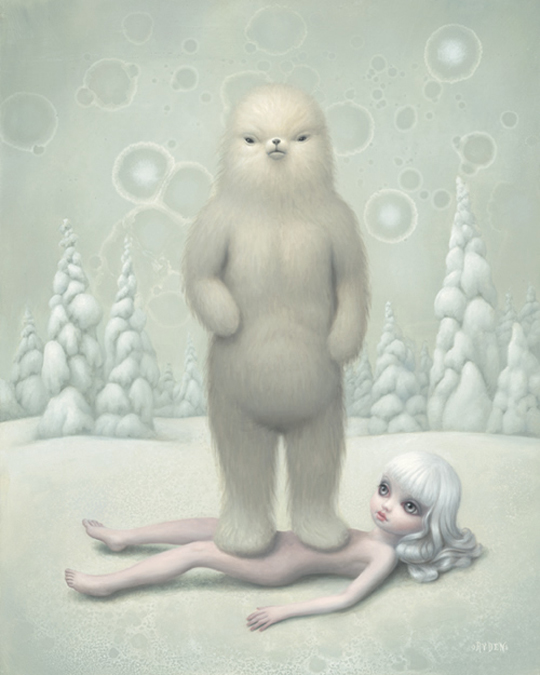 . . . even if that means the children themselves become the monsters. 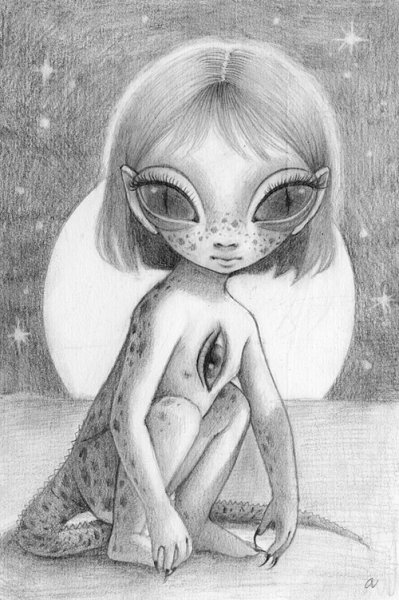 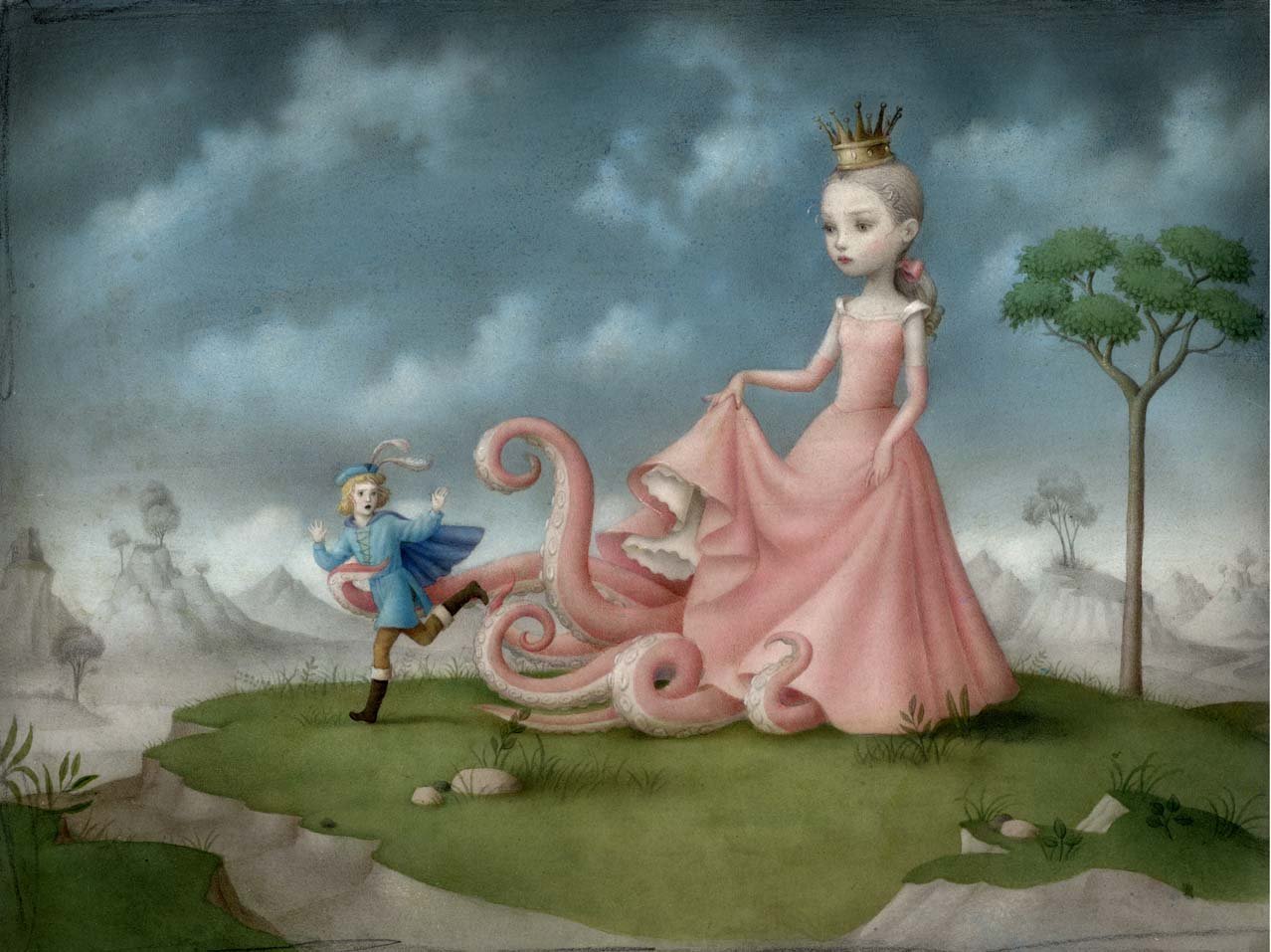 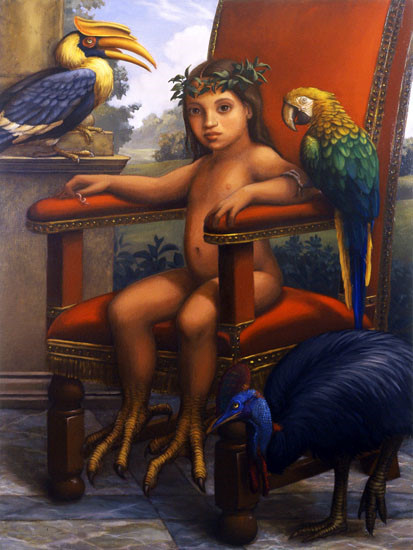 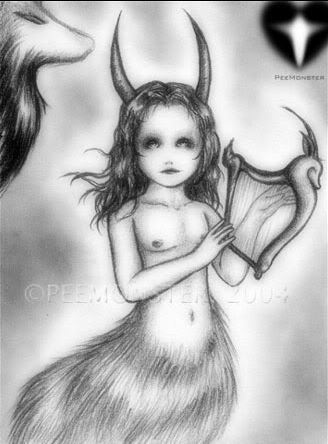 (7) Acts of violence or suggested violence – Violence has a long tradition of being a stand-in for sex in art and media. Stabbing in particular can symbolically represent an act of rape. But any violent act can be a means to end unwanted sexual desires, as violence serves as both a psychological mechanism for the desirer to emotionally distance himself from the desiree (lashing out violently at the desired person or persons sharply and instantly alters one’s emotions, as well as removing the object of desire, temporarily or permanently) and, like monsters, a way of associating that which repulses us with something we wish to be more repulsed by. Little girls are both the agents and recipients of violence in these images; it’s tough to decide which is more disturbing. 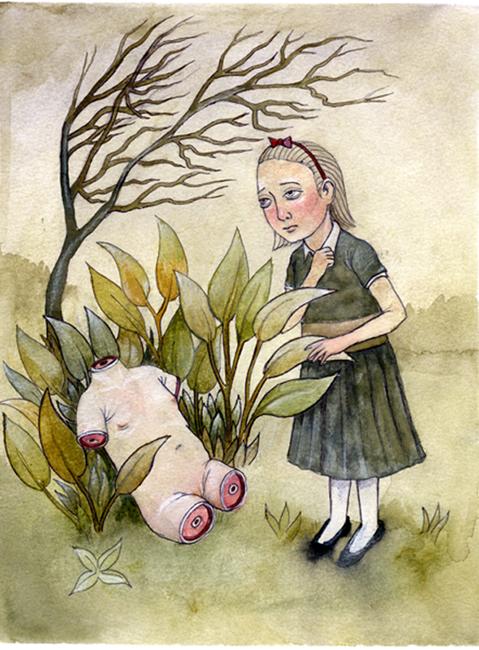 Alex Kuno – The Miscreants of Tiny Town – The Grisly Discovery (2009)

Caleb Weintraub’s work is filled with an apocalyptic vision in which children become agents of chaos and perpetrators of violence against adults. He slyly references the popular childhood game of Operation in this next piece, but it doesn’t take long to realize this is actually a cannibalistic feast. Notice the genital mutilation of both the man on the table and the woman lying on the floor at right, as well as the snack being munched on by the girl in the green checked shirt. These references cannot be accidental. 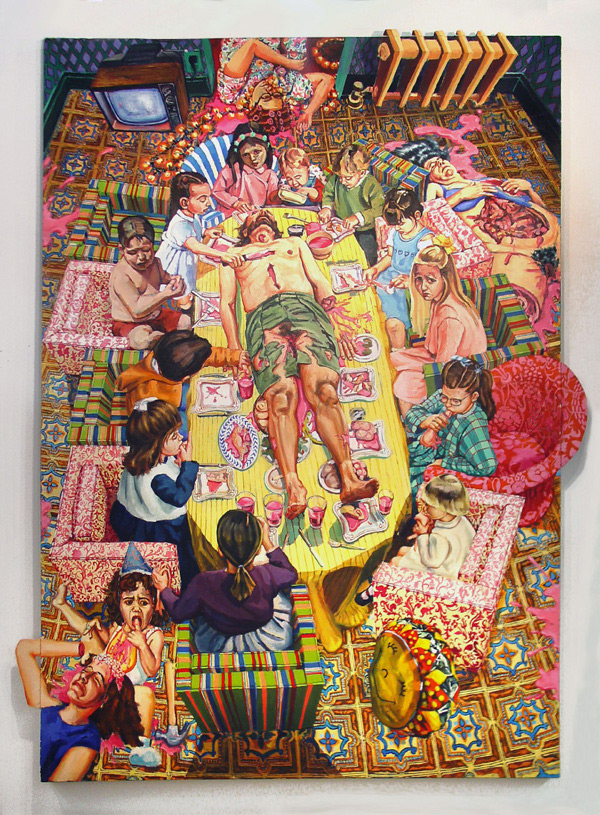 In Carmen Roig’s Happy B-Day, a little girl who looks distressingly like Marlier’s Martine is pierced through by several swords. Recall what I said earlier about stabbing and rape, and notice the clergy paper doll outfits to either side of the girl. There are exactly nine swords in the image. Anyone passingly familiar with the Tarot will immediately see the implication: many Tarot experts consider the Nine of Swords to be one of the worst cards in the deck, a representation of mental anguish, feelings of worry and guilt. Taken all together, these clues seem to add up to a commentary on sexual abuse by priests. The priests then are appropriately headless and faceless, not individual abusers but symbols of a much larger problem. 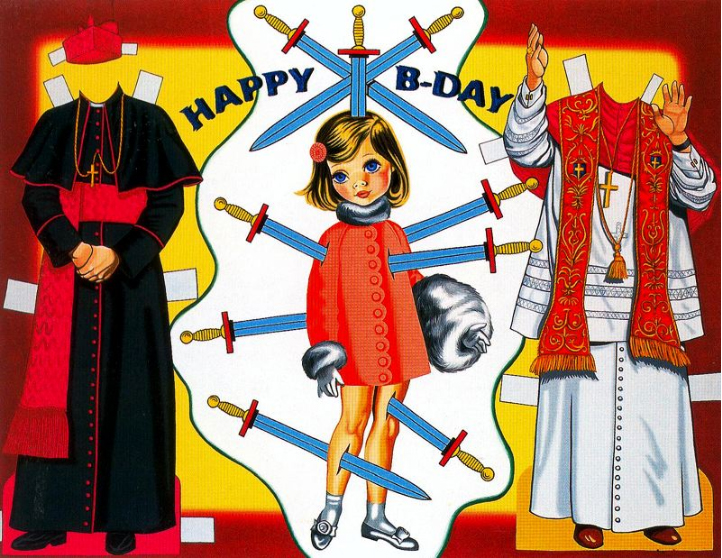 On the other end is Jana Brike’s The Cain Complex, the title of which refers to a psychological phenomenon of extreme hatred and jealousy of, and rivalry with, a sibling, usually a brother. This is of course based on the story of Cain and Abel in the Bible. That the aggressive sibling in this image is a female is interesting, and there is an unmistakable sexual implication in the nudity and positioning of the figures. 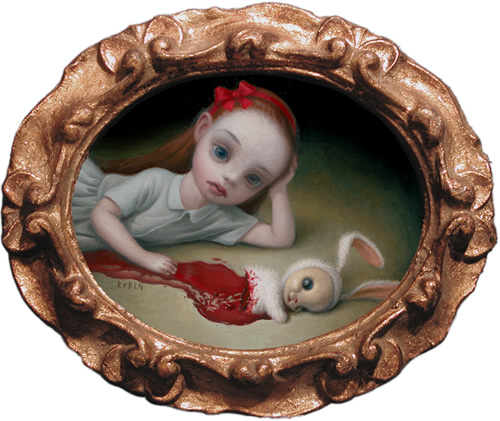 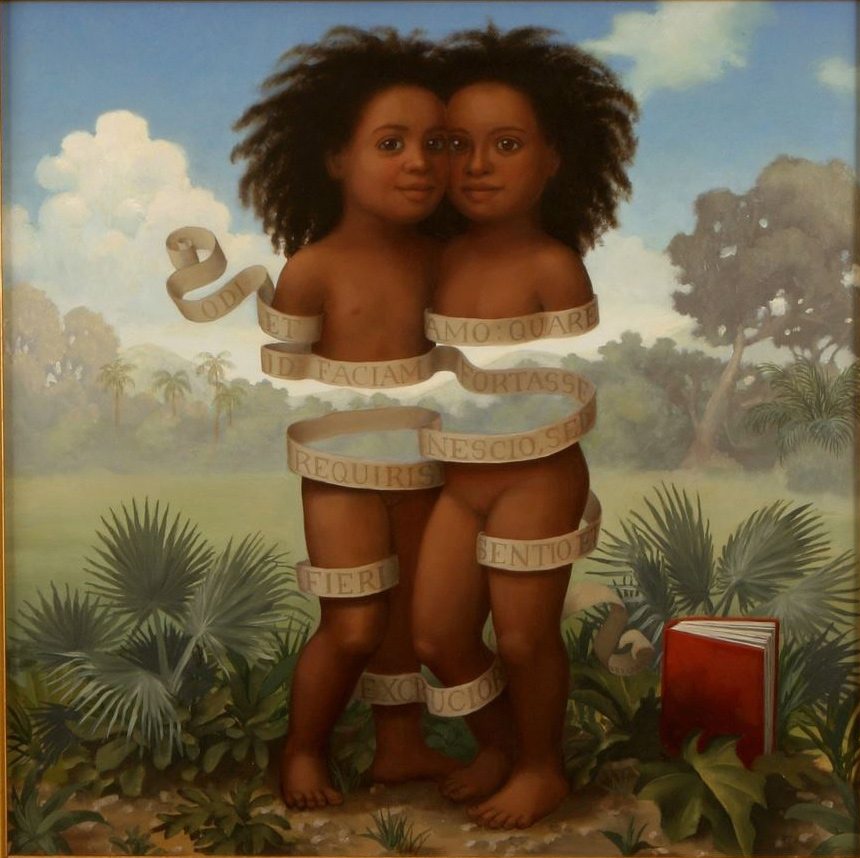 Cristina Vergano – I Love and I Hate 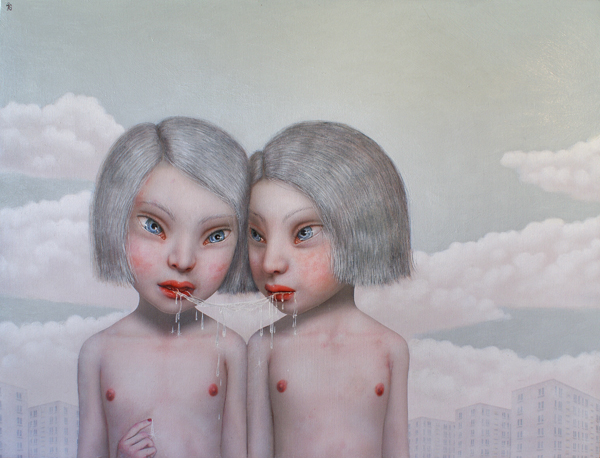 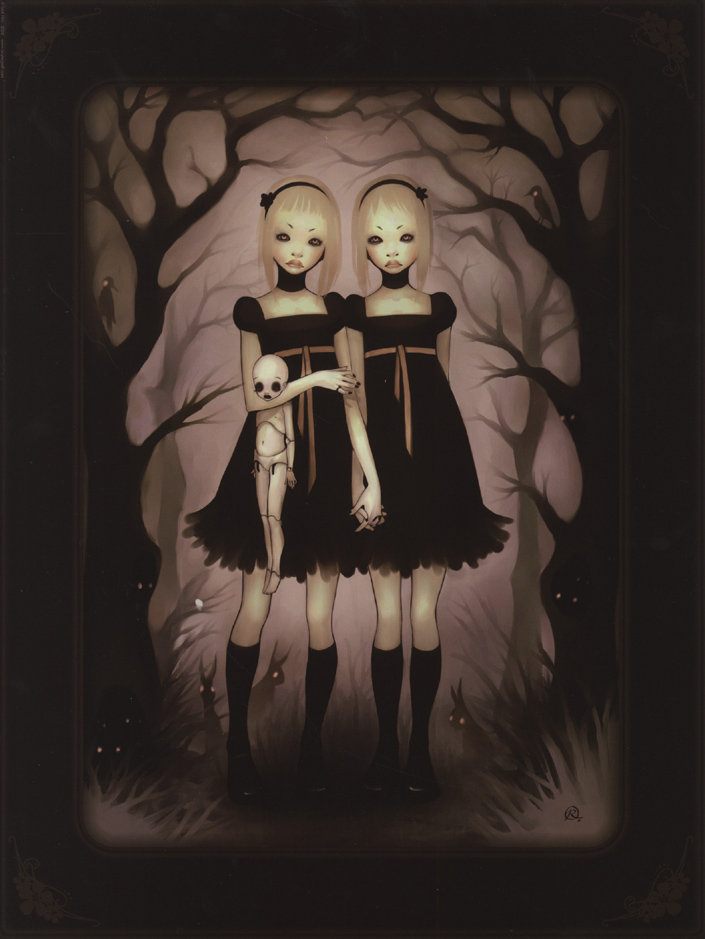 Triplets count too, even if they are much rarer. 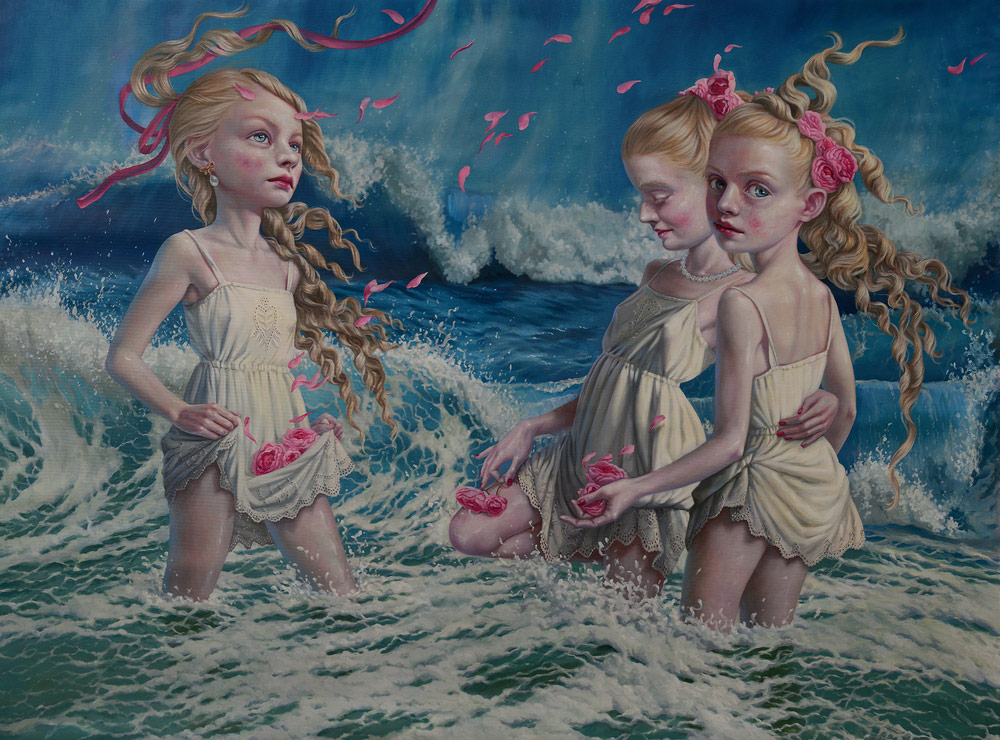 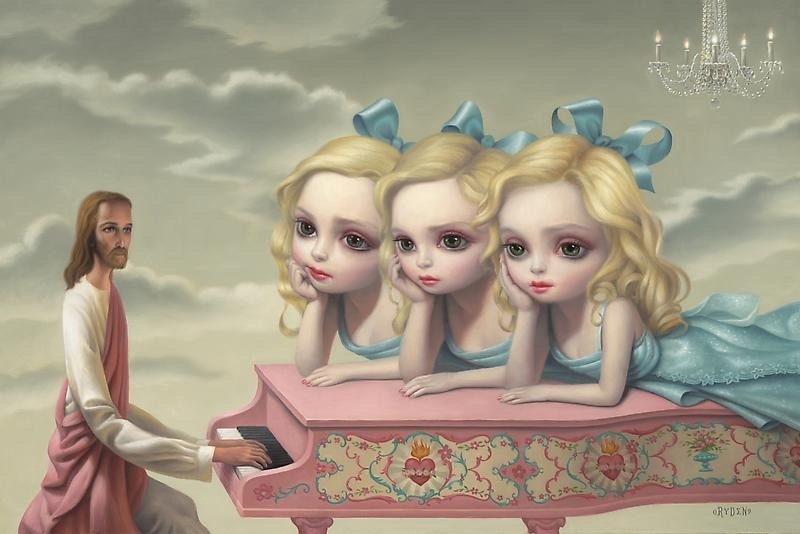