Pigtails has already posted two articles about Japanese public sculpture. You can read the post about The Little Girl With Red Shoes On, and Beatrice. Many other statues of girls are in public places in Japan. It seems to me that there is a greater interest in Japan for young girl art than in most countries. Note the number of Japanese artists listed in the ‘Pipeline’ on Pigtails in Paint. My subjective impression, acquired from image searches, is that the percentage of public statues that feature young girls is greater in Japan than in other countries. Many of these sculptures can be seen on the internet with information about where the statue is located, but no other information about the statue. This article will briefly look at ten Japanese public sculptures. 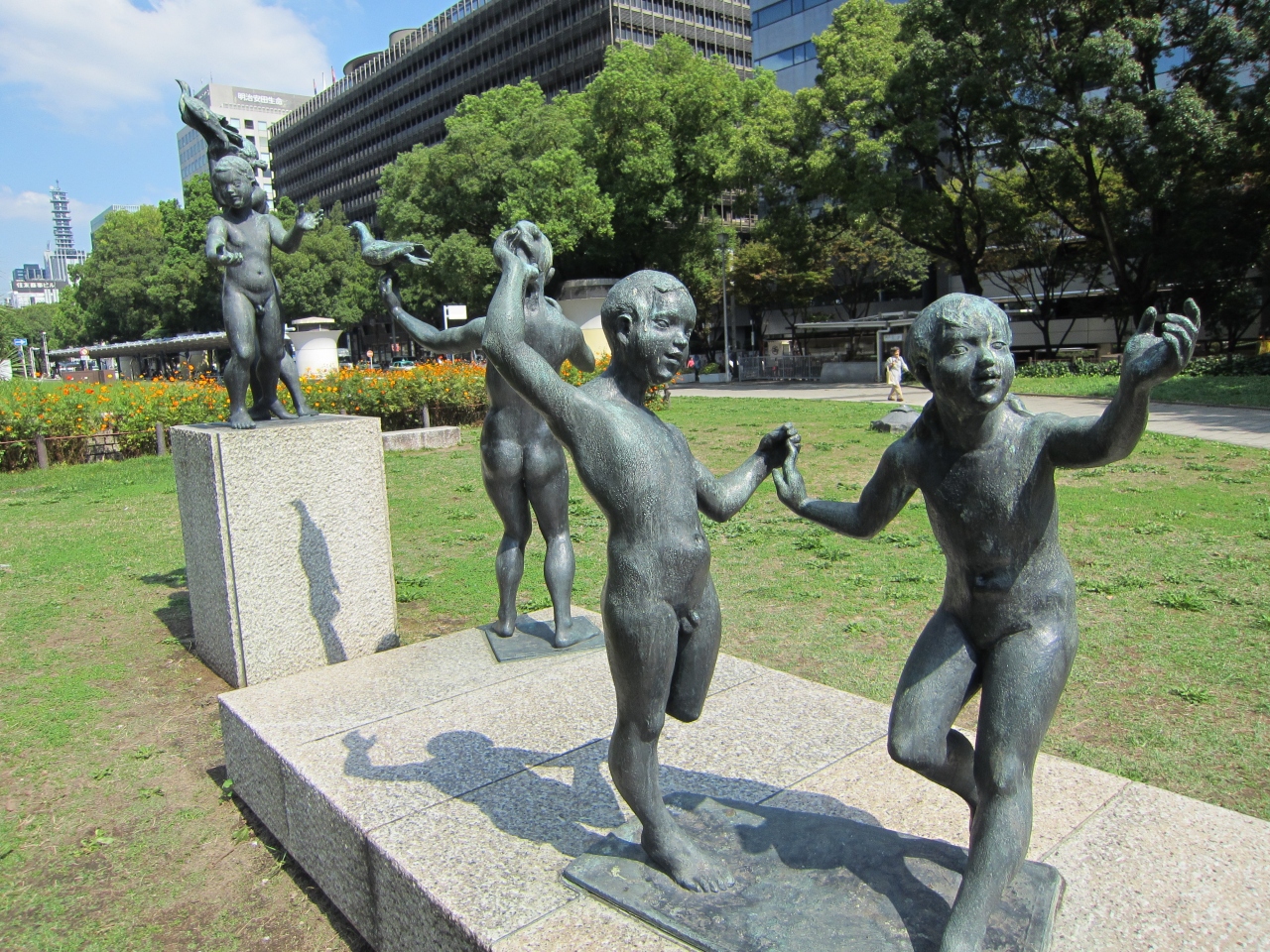 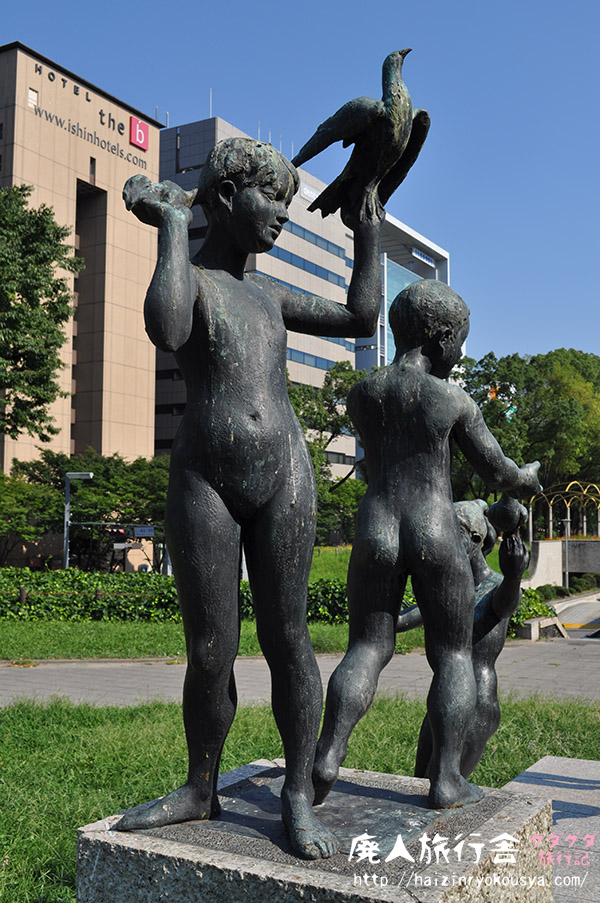 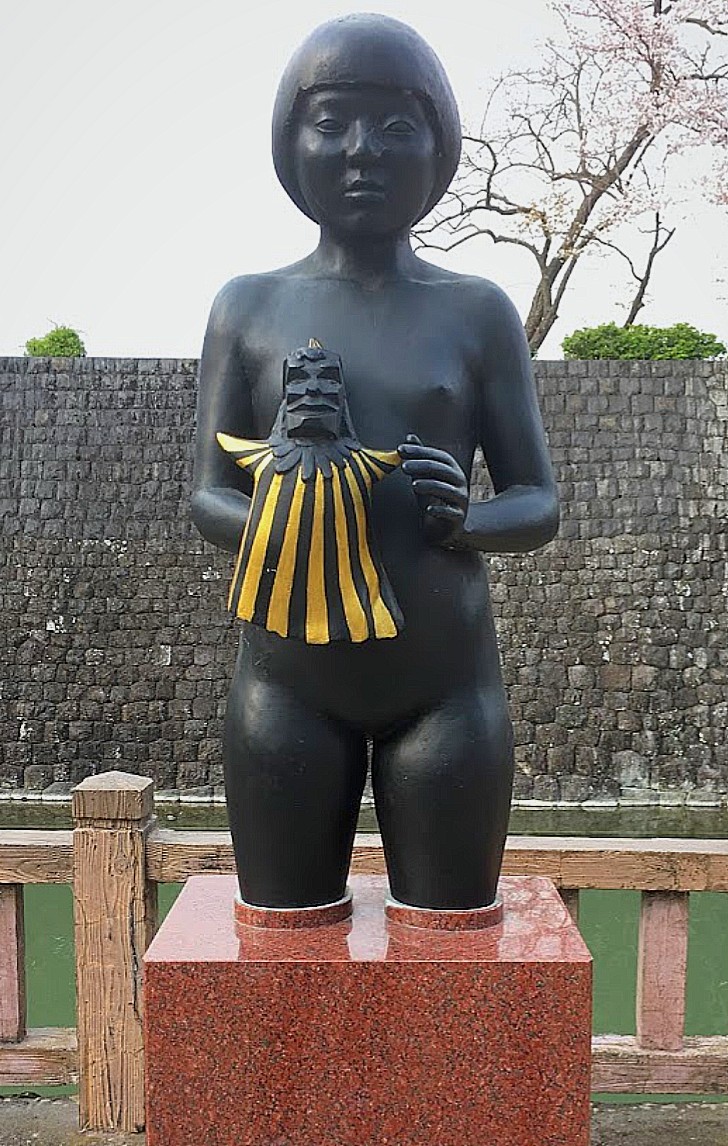 The next statue is in the moat at Sunpu Castle, Shizuoka City. The military base at Sunpu Castle closed in 1949, and the castle was converted to a tourist attraction. I could not find the name of the artist who created this statue. The date is also unknown, but is probably after 1949. Two things about this statue of a girl with a hand puppet are unusual. First, the figure is cut off at mid-thigh. Second, the puppet is painted, but the girl is not. 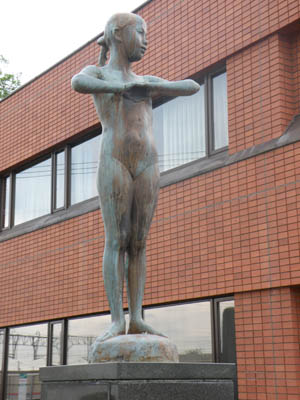 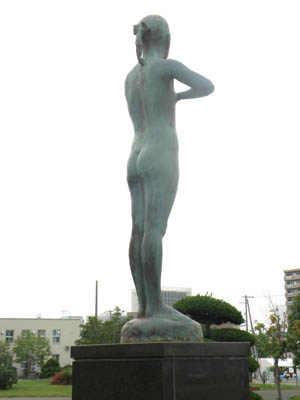 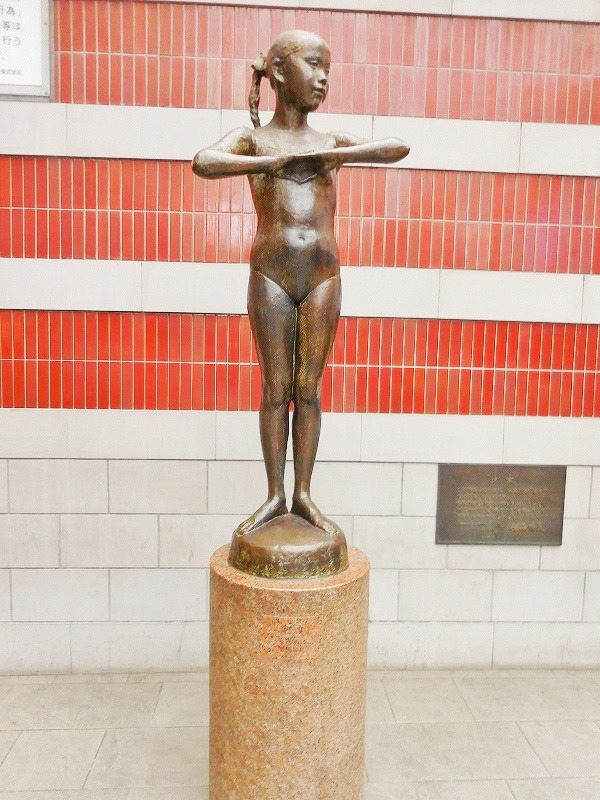 The next statue is simply titled Girl. One edition of this statue is outside the Ebetsu City Waterworks Government Building. Another is at the Yokohama train station east exit. If the Japanese like a sculpture, it is common to have multiple copies on public display in different places. The artist is Churyo Sato, one of the greatest 20th century Japanese sculptors. Sato began his career as an artist in 1934, and continued working until his death in 2011 at age 98. Girl has a simple pose; the aesthetic appeal is primarily the natural beauty of the model. Look closely and you will notice something peculiar. From the front Girl may at first appear to be nude, but is actually wearing a close-fitting leotard. From the back, she definitely seems to be nude. 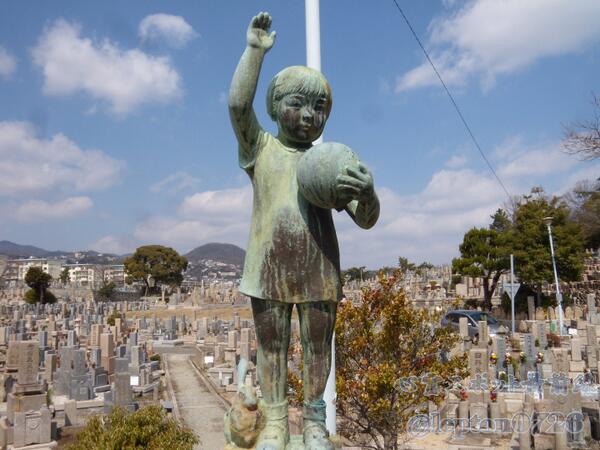 Setsuko at Manchidani Cemetery in Nishinomiya City is the strangest girl statue in Japan. Many believe that it is haunted. The statue is based on the character Setsuko from the 1988 animated movie Grave of the Fireflies. The movie tells the story of a brother and sister in the final months of World War II. Setsuko dies in the movie, which has been acclaimed as one of the most persuasive anti-war movies. After this statue was made, weird stories began to circulate about it. It was said that a boy broke an ear from the rabbit next to the girl, and afterwards the boy broke his leg. Mysterious lights have been rumored to flicker around Setsuko at night. 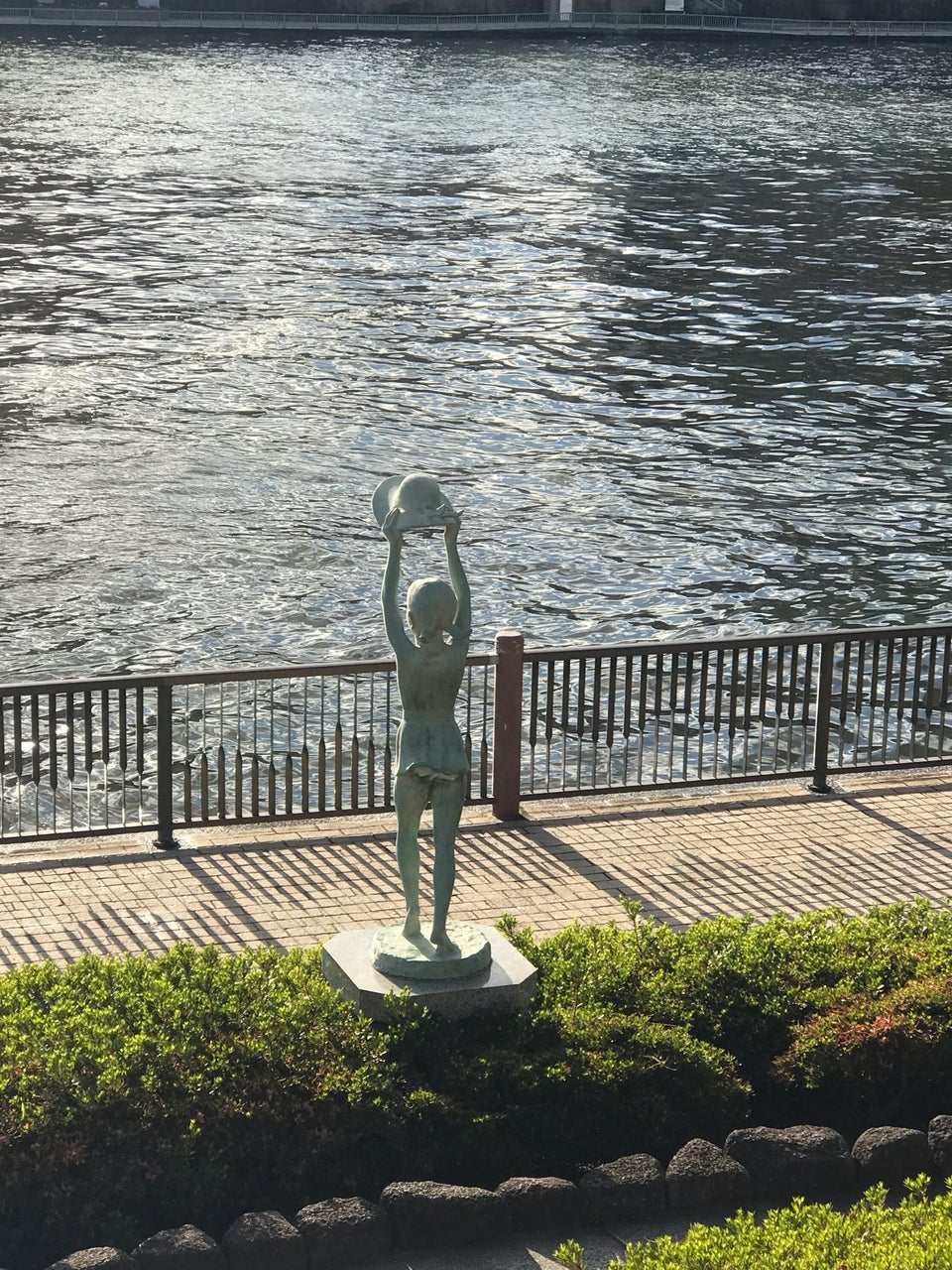 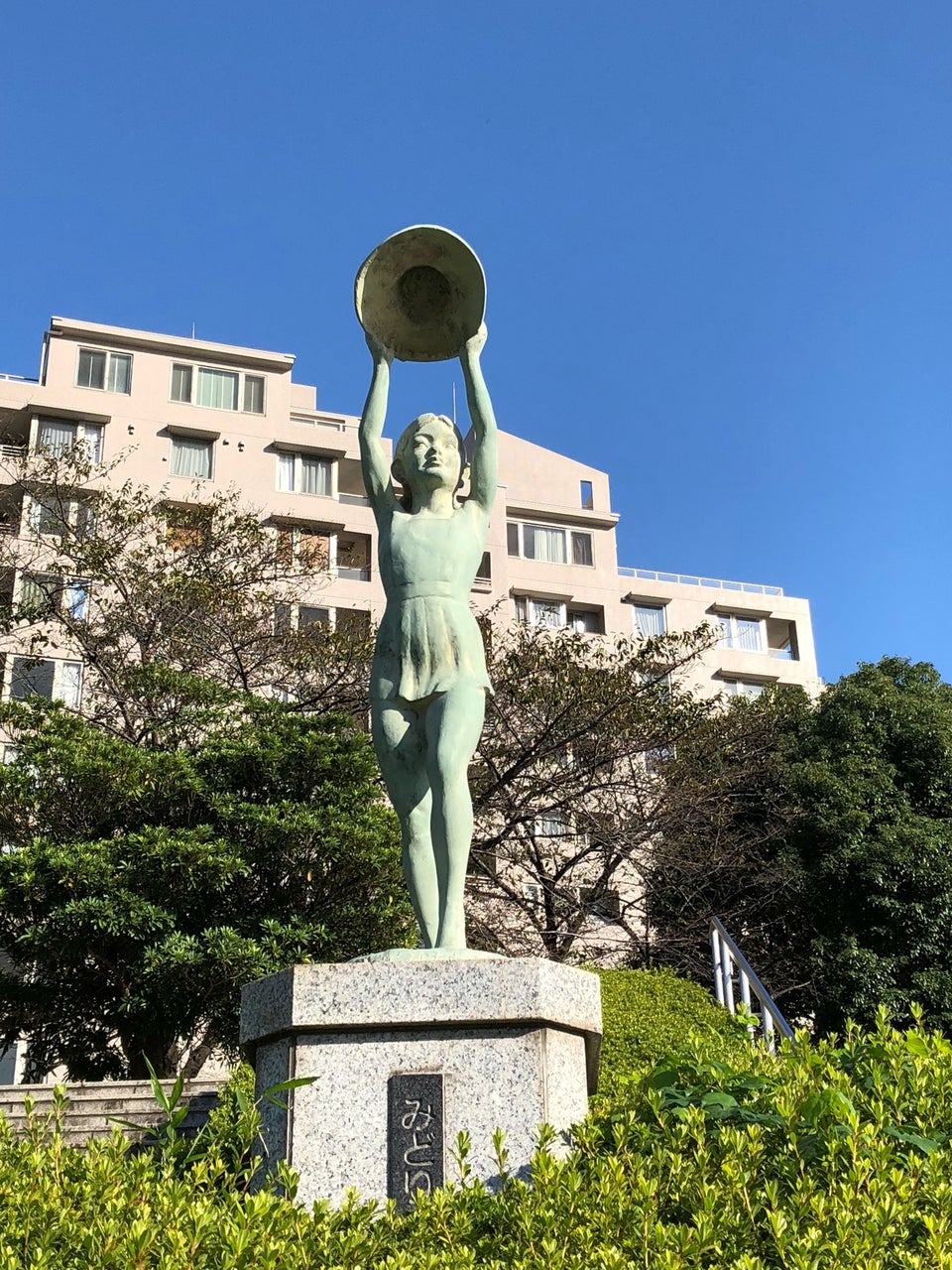 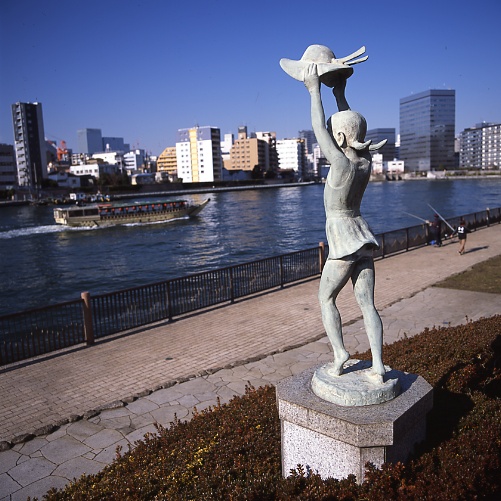 Setsuko, like many girls in Japanese anime, wears a short skirt. This Japanese vogue for miniskirts is noticeable in Japanese statuary as well as in cartoons. This is shown in the next four statues. Green Wind stands near the Sumida river in Tokyo. Another copy of Green Wind can be seen near the ticket gate at Shinjo Station. I was not able to track down the name of the sculptor or the date for Green Wind, or for the next statue, Eternal Girl. The large characters on the base of the statue are the title, Eternal Girl. The smaller characters below may be the name of the sculptor, but I was not able to read them. Eternal Girl is in the Chiyoda section of Tokyo. 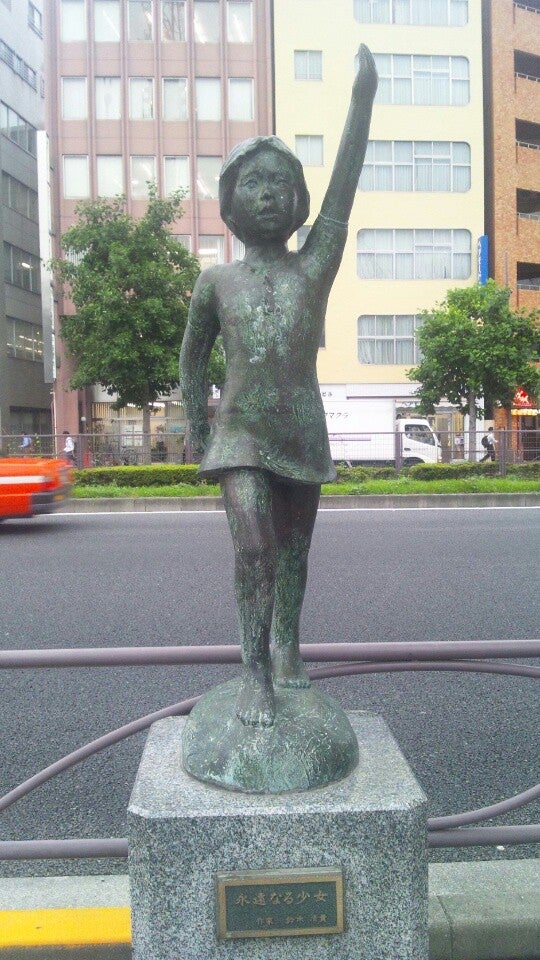 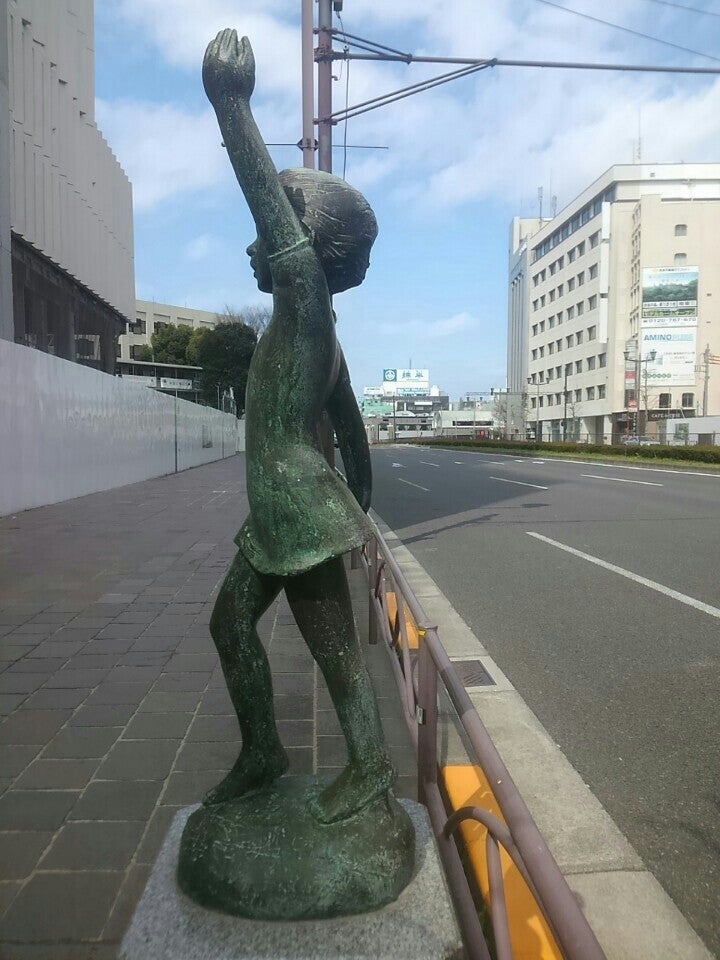 A statue of a girl in Iwamizawa Central Park on the island of Hokkaido, the northernmost of Japan’s main islands, is shown next. I do not know the name of the statue, or the name of the sculptor. Several photos of the statue are online, but apparently the title and artist are not considered important enough to mention. Standing Girl is a title I made for the captions. The title for the following statue, of a girl playing a flute, was also not given on line, but it can be read on the base of the statue. According to Google Translate, 人間 means “human” or “human being”. It is an accurate title, but very general. Human is near Nusamai Bridge, Kushiro City, Japan. 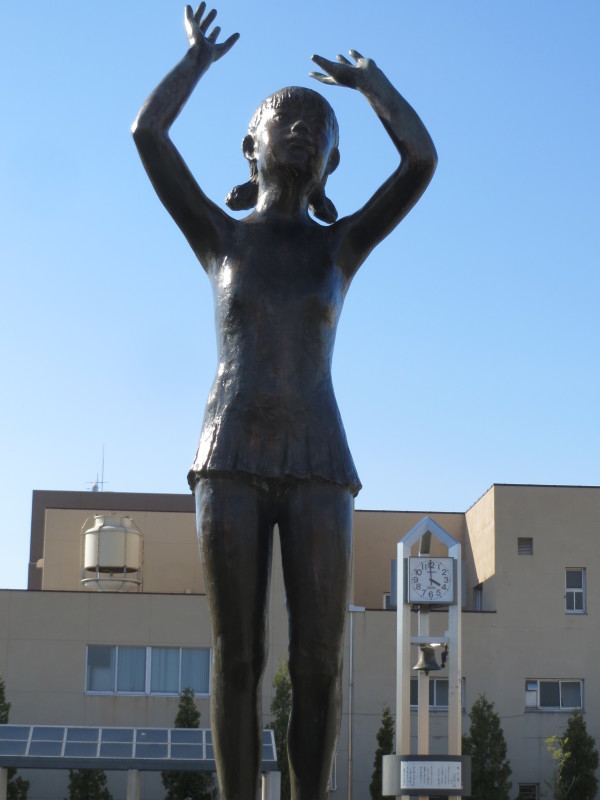 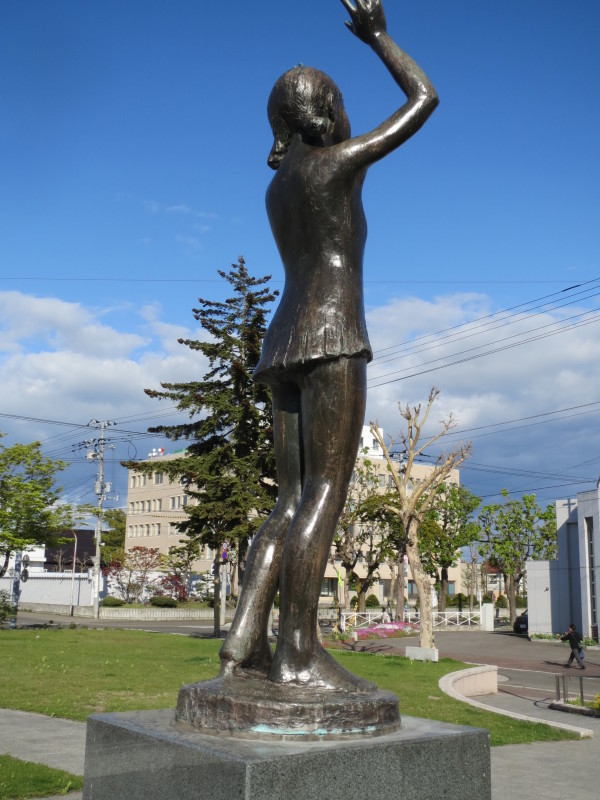 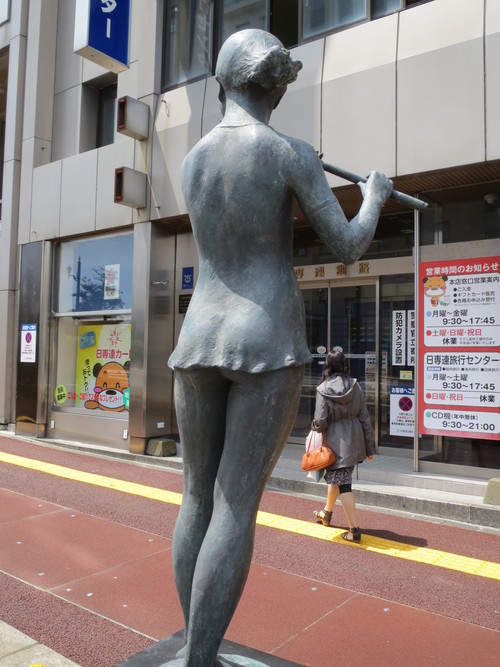 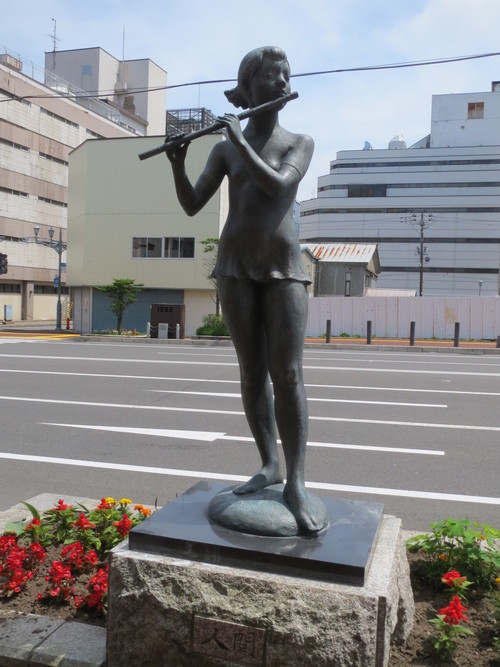 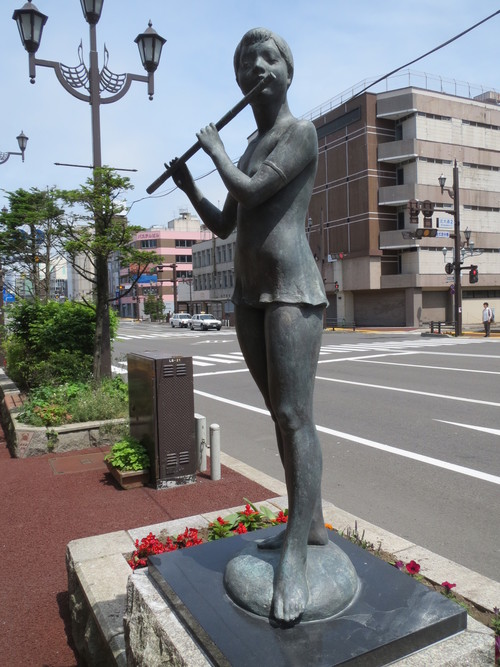 The Girl Scout Statue in Yamashita Park, Yokohama is a grouping of three girl scouts intended to symbolize the friendship between the Girl Scouts of Japan and United States of America. It is near The Little Girl With Red Shoes statue. Eleven-year-old American Girl Scout Libby Watson and seventeen-year-old Japanese Girl Scout Hiroko Tanaka were the models for the two girls saluting and shaking hands. Audrea Cox was the model for the younger girl near them. 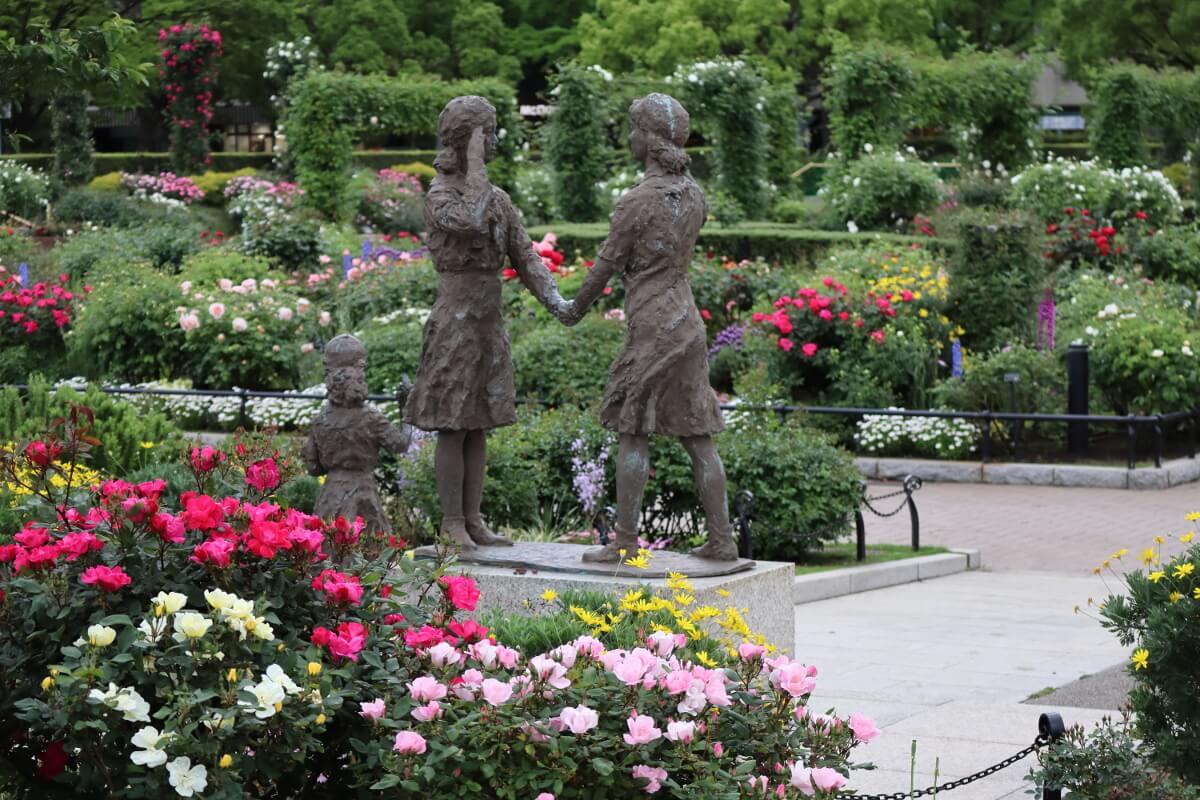 The last sculpture in this post is in a public park in Tokyo. Pictures of the statue are available online, but I have not been able to discover the name of the statue or of the sculptor. Statements have been made in Japanese forums that the statue is not really suitable for display around children because of the detailed representation of the girl’s vulva. 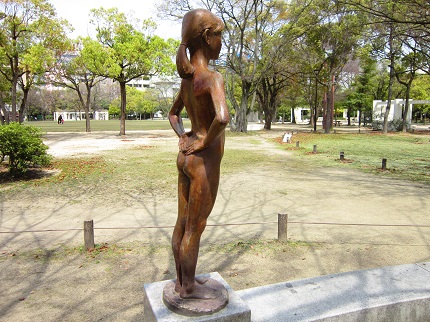 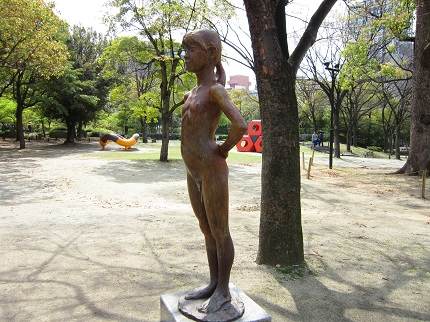