Lucas Cranach the Elder (1472–1553) was a German Renaissance artist. He was the court painter to the Electors of Saxony for most of his career and is known for his portraits and nude subjects drawn from mythology and religion. I find it interesting that Cranach was close friend of Martin Luther (the leading figure of the Protestant Reformation). Because he is also regarded as an innovator for his nudes, Kenneth Clark commented that “Cranach is one of those rare artists who have added to our imaginative repertoire of physical beauty.” The playful almost comic mood of Cranach’s paintings gives his work an appeal not found in the work of most of his contemporaries: Albrecht Durer, Mathis Grünewald and Hans Holbein with the exception of Hans Baldung. The earliest large work by Cranach is The Rest on the Flight into Egypt of 1504. Behind Mary and Joseph stands an old fir tree and birch tree that would more likely be found in Germany than in Egypt. Busy angels who make music, bring water and offer the Christ Child birds take the form of cherubs and child nymphs. To the left of Mary’s feet sits an angel in gold that plays the flute; the style of the gown appears to be that of a girl’s because of the style of the sleeve. Cranach seldom painted the nude beauties he is known for until the late 1520s—well into the Reformation. Of the standing Venus paintings, this seems to be the most famous; her slender form, tiny breasts an narrow hips, the rounded forehead, are the physical characteristics of an adolescent girl or young woman. We tend to think of the ideal as a busty beauty but that was not the case until the mid-twentieth century. Nudes in the German tradition drew their inspiration from Gothic art which had a juvenile air. Cranach’s innovation was that he took the stiff figures of Gothic art and gave them the grace of Botticelli.

Cranach was a close friend of Martin Luther from the beginning of the Reformation.  Luther was godfather to Cranach’s daughter Anna and Cranach in turn became godfather to Luther’s first-born son, Johannes. This special relationship with its founder enabled Cranach to chronicle the Reformation. At the time of the above portrait, Luther was regarded as an outlaw by the Roman Catholic Church. Luther is shown with the beard he had grown to disguise himself as the nobleman “Junker Jörg”. He was in hiding at the Wartburg, a strong fortress at the top of a mountain, under the protection of the local prince. In a small study in the castle, he translated the New Testament from Greek into German. To providence, Cranach owned the only publishing house in the area. Cranach illustrated and published Luther’s first translation of the Bible into German, which was the first time that the scriptures were translated from the Latin to be made available to the public. Cranach is known for conveying Lutheran religious concerns in his paintings, but I believe the influence of the Reformation on his series of Charity paintings has not yet been recognized. Charity is the foremost of the three theological virtues “And now abideth faith, hope, charity, these three: but the greatest of these is charity” (I Corinthians 13:13) The word “love”, is a closer definition to the modern ear because the word “charity” has the implication of giving to the needy. The fourteenth century Italian sculptor Tino da Camaino was the first to represent Charity as a loving mother with three or more children. Italian Renaissance artists followed the Graeco-Roman convention of depicting children as only boys.  The Italian masters appear to have been caught in a “patricentric box of language”. In Cranach’s interpretations of Charity, one of the children is represented as a little girl which is likely the first nude of this kind in western art. I believe Cranach broke with convention for a reason.

Cultures have been structured according to two principles: patriarchal and matriarchal. The priority of matriarchal principles is unconditional love: a mother loves her children regardless of whether they are good or bad; they are loved because they are her (or another woman’s) children. The essence of this love is mercy and compassion. In contrast, the priority of patriarchy is conditional love: a child needs to work to be respected by the father. The essence of this love is justice. 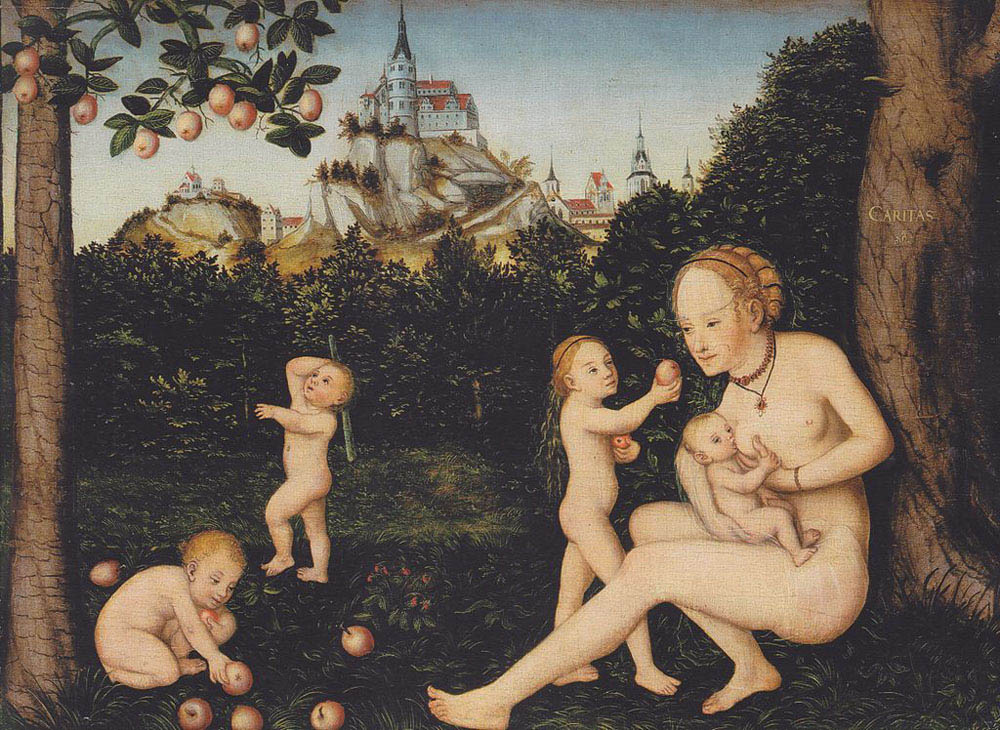 “Luther established a purely patriarchal form of Christianity in Northern Europe that was based on the urban middle class and the secular princes. The essence of this new social character is submission under patriarchal authority, with work as the only way to obtain love and approval. Behind the Christian facade arose a new secret religion, ‘industrial religion,’ that is rooted in the character structure of modern society, but is not recognized as ‘religion.’

The industrial religion is incompatible with genuine Christianity. It reduces people to servants of the economy and the machinery that their own hands build. The industrial religion had its basis in a new social character. Its center was fear of and submission to powerful male authorities, cultivation of the sense of guilt for disobedience, dissolution of the bond of human solidarity by the supremacy of self-interest and mutual antagonism. The ‘sacred’ in industrial religion was work, property, profit, power, even though it furthered individualism and freedom within the limits of its general principles.”

The Virgin Mary was a predominant figure in Renaissance art—about 1 in 4 paintings of the period represent her. I suspect that Cranach sensed the dangers of the elimination of the image of the Holy Mother and I believe his Charity paintings were intended to compensate because the image of the mother ultimately represents the principle of what ought to be. Traditionally,the father would support the family by going out into the imperfect world; he would deal with objective reality with a focus on prosperity. The mother would remain with the children in the bonds of human solidarity which better reflects genuine Christian principles because they can be compromised in an antagonistic environment. In all of Cranach’s Charity paintings, one of the children is a little girl. In some works, it is difficult to tell because only a tiny pigtail indicates the child’s gender. In two of the paintings, the girl holds a doll as her role model; the mother holds an infant. Cranach’s paintings are the only Charity paintings I know of that include this iconography. Feminine nature was to be valued and respected. Matriarchy has found expression in humanism and natural law: the idea of the sacredness of life and human equality. Art that follows the tradition of the Charity paintings has fallen out of favor due to a patriarchal view that regards such work as regressive. While the Reformation had some positive points to the Protestant work ethic, it had the effect in atomizing society. Our perception of human interactions has changed due to loss of the matriarchal perspective. Nudity is interpreted from a subtext of self-interest and mutual antagonism which often leads to misinterpretation. It makes a great difference whether the body is viewed as a commodity or from the perspective of a loving mother who appreciates the sanctity of life. In the past, the matriarchal perspective colored the perception of even sensual subjects, as in Cranch’s Venus paintings; the figures reflect a gentle eroticism. I believe much of contemporary feminism is at fault in being compromised by the values of industrialization. It is actually patriarchal in it’s values; it takes part in what Fromm called the “industrial religion.” Many artists from the beginning of the 20th century sensed the tendency of alienation and created work that embraced the bonds of human solidarity to counterbalance (eg. Lotte Herrlich, Ida Teichmann and Sally Mann), but the current barely exists today.