In a corner of Lichfield Cathedral (Lichfield, Staffordshire, England) lies since 1817 a white marble statue depicting two girls asleep in each other’s arms on a bed. It was carved by the sculptor Francis Legatt Chantrey, who presented it at the Royal Academy Art Exhibition of 1816, and it is considered one of his finest works. Behind and above the statue stands a black marble plaque, see the following image (from Wikipedia, licensed under the Creative Commons Attribution-Share Alike 3.0 Unported license): 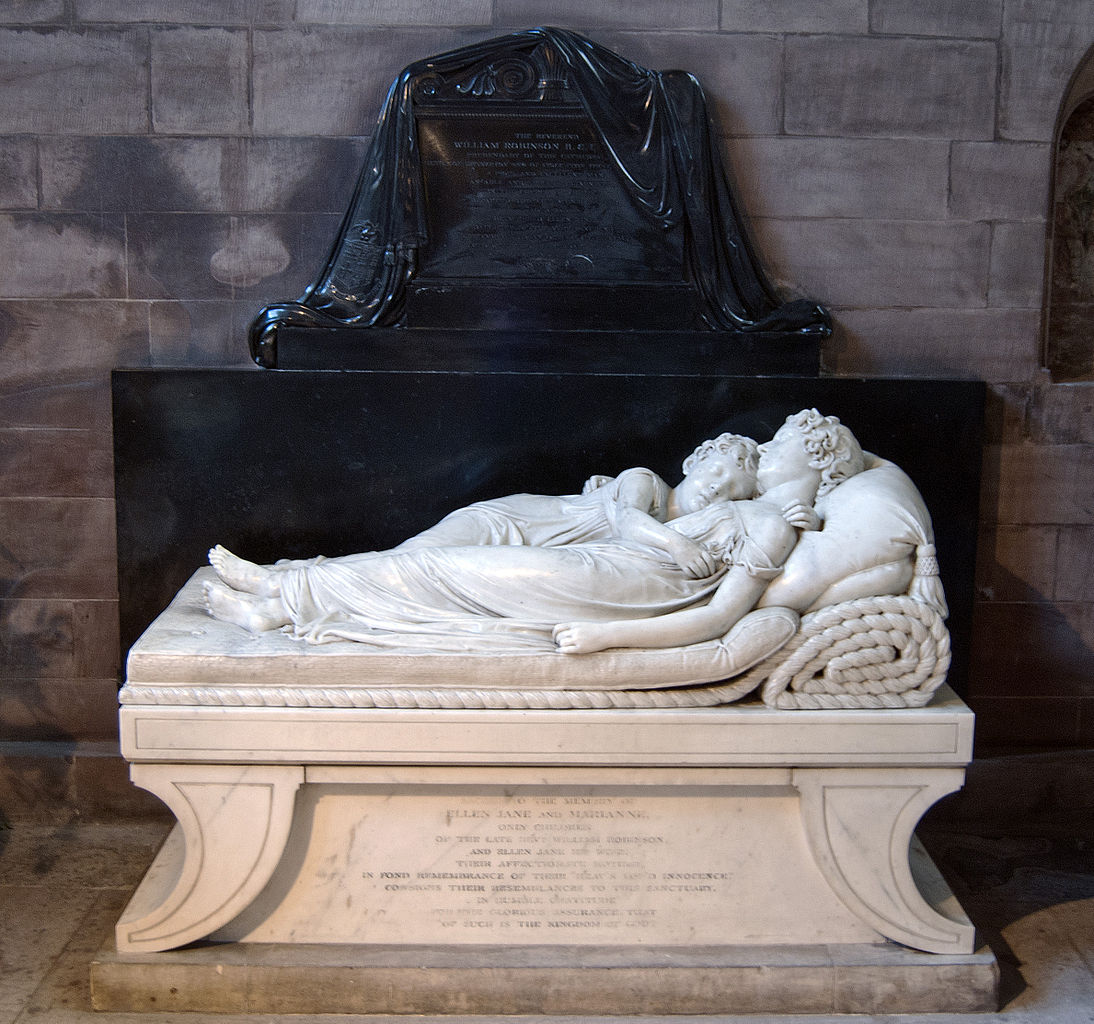 It represents the tribute of a bereaved woman to her deceased family. Ellen-Jane Robinson (née Woodhouse) lost her husband, the Reverend William Robinson, in 1812. Then she witnessed the death of her eldest daughter, also named Ellen-Jane, in 1813, followed by her younger daughter, Marianne, in 1814. She commissioned Francis Chantrey to immortalize the two girls; she told him of how in the past she had watched as her daughters fell asleep in each other’s arms, and this was how she wanted them remembered. She took inspiration from the monument to Penelope Boothby by Thomas Banks in St. Oswald’s Church, Ashbourne; thus Chantrey visited it before starting his work. The black marble plate is dedicated to her husband William Robinson. The next image (also from Wikipedia, copyright-free) shows the statue from another angle: 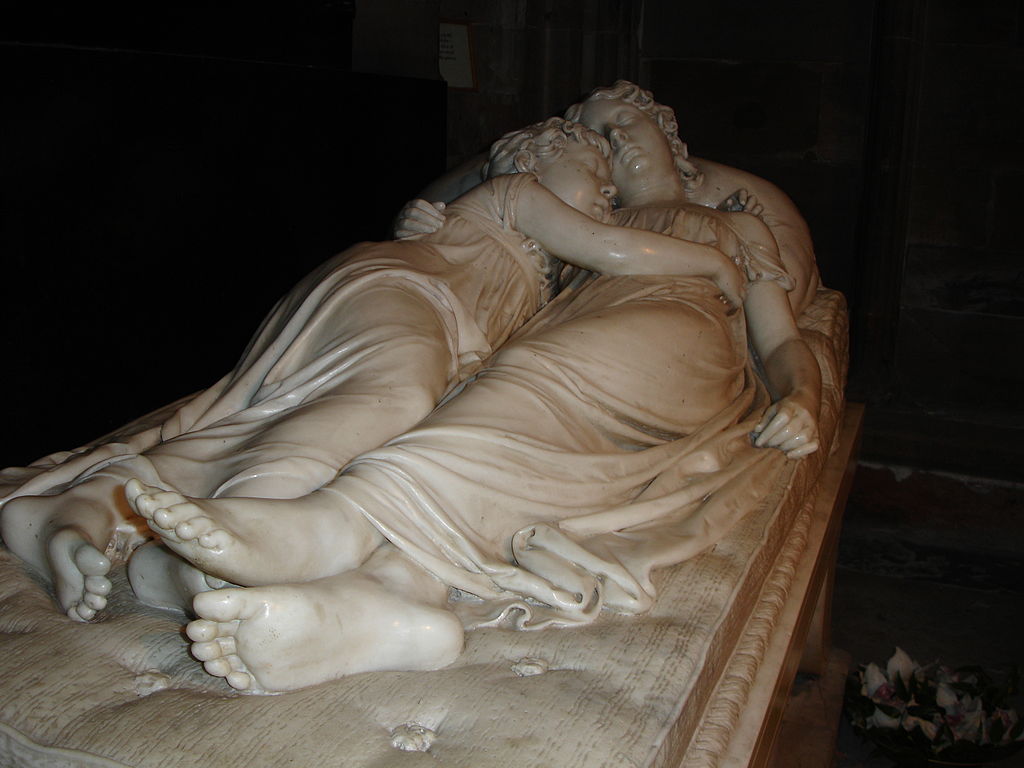 Note that Brooke Boothby, Penelope’s father, was also involved with the Lichfield Cathedral, in particular for the purchase of its 16th-century stained glass in 1801. There is another link between the two sculptures: poetry. In 1796, Brooke Boothby published a collection of poems grieving his daughter: Sorrows. Sacred to the Memory of Penelope. A transcription (by Bonita Billman) of a selection of 8 sonnets was published on Internet by Sonnet Central and by Wikisource. I corrected one of them and transcribed 6 other sonnets and one elegy in three blog posts (here, here and here). In 1826 the poet William Lisle Bowles wrote the poem “Chantrey’s Sleeping Children” about the Lichfield Cathedral sculpture (see also Wikipedia).

The following beautiful close-up photograph was used to illustrate the poem “Norse Lullaby” by Eugene Field (1850–1895), which repeats the refrain “Sleep, little one, sleep”. The strangest of it all is that it appeared in a blog “dedicated to sleep and sleep disorders, particularly obstructive sleep apnea“, and the post with the poem and picture has its title starting with “Three Steps to Sleep”, with categories “dreams”, “sleep”, “sleep apnea” and “sleep disorders”! I doubt whether poetry has ever been used to cure sleep apnea, but this would certainly represent the most charming form of medicine. 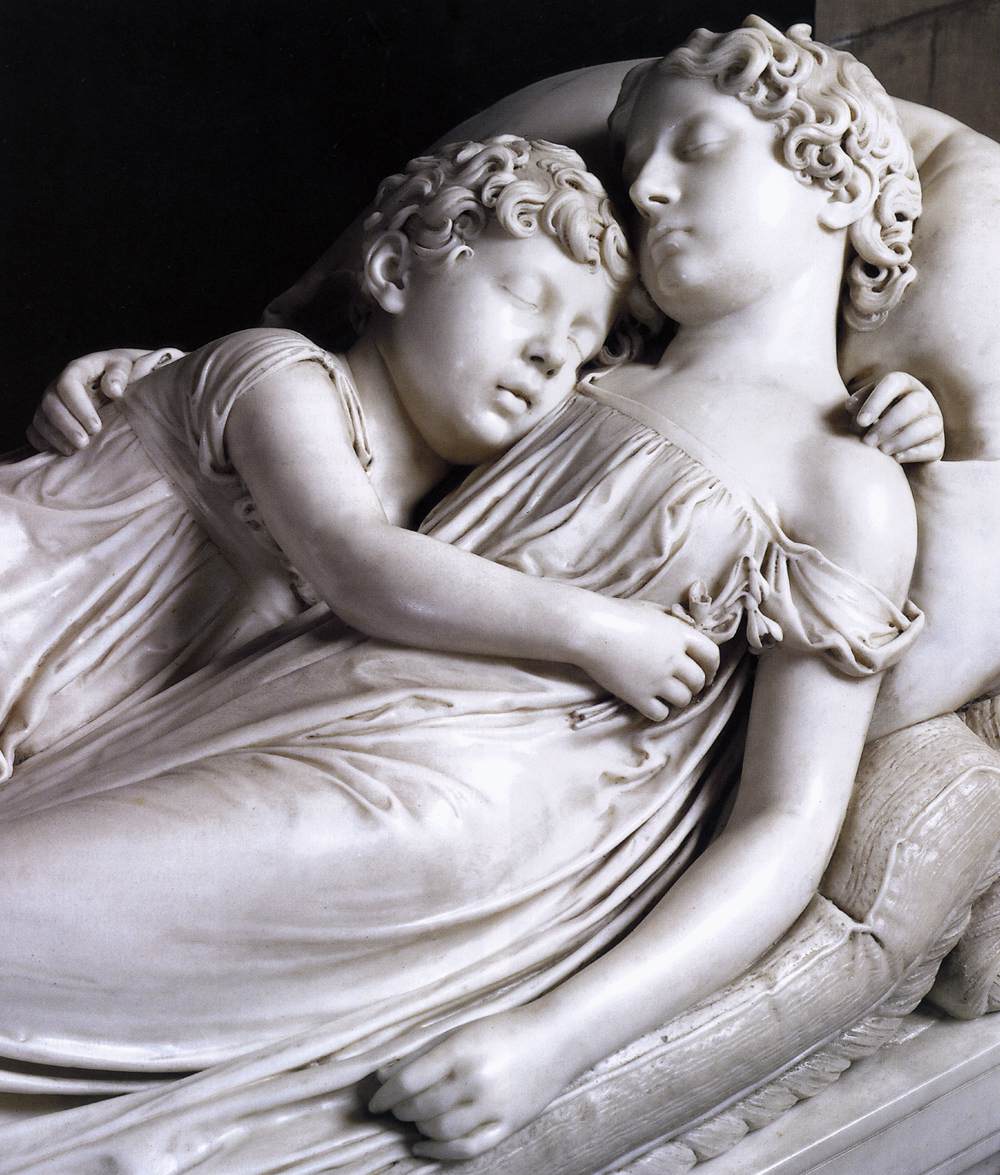 In 2008, Branislav L. Slantchev made a photo report on the Lichfield cathedral; it contains a wide-angle photograph of the statue under the church’s stained glass, and a close-up of the two children’s faces; both are copyrighted by the author.