The Indians of the Americas are admired for their freedom and independence.  Although their traditional culture based on hunting has disappeared from most of the Americas, its legend will always live on.

The first photograph is of a Southern Cheyenne girl holding a bow and arrows.  I estimate that the photo was taken in about 1890.  To put that date in context, here are some of the things that happened in that era:  by 1883 the great bison herds had been destroyed and the traditional life of the buffalo hunters was no longer possible; in 1890 the census bureau declared that the frontier, the border between the White-inhabited United States and Indian country, no longer existed;  in October 1898 the last official battle of the Indian Wars of the United States was fought at Leech Lake; and on 29 August, 1911 the stone age in the United States came to an end when the last surviving Yahi Indian came to “civilization”.  The demure little Cheyenne girl in the photo no doubt saw a lot of change in her lifetime. 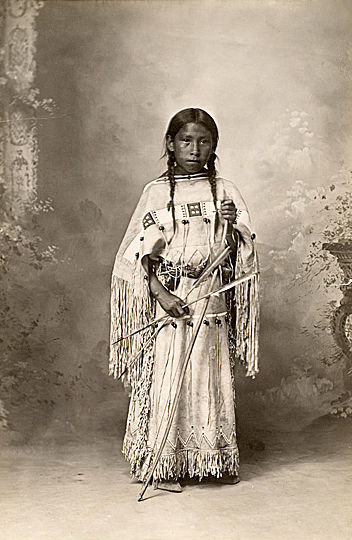 It may seem a little incongruous that the girl is holding a bow and arrows; we usually associate weapons with males.  While the photo is obviously a studio portrait, and the bow and arrows may be merely a photographer’s prop, it is not necessarily inappropriate for a female to be photographed with a bow.  It may be surprising, but a few of the Indian warriors were female.  Nonhelema, known to the Whites as “Grenadier Squaw”  first achieved renown as a Shawnee warrior during the Battle of Brushy Run in 1764.  During the Revolutionary War she was a chief, and one of the few Indians to support the American side.  Her service to the American Army as a guide, interpreter, and warrior were invaluable to the cause of American Independence.

The next two portraits are from the same era.  Both are of Lakota Sioux girls, and both girls traveled with Buffalo Bill’s Wild West Show.  To a person in the 21st century, it may seem strange that Indians were honored performers in a popular show at a time when the Indian War was in progress.  It may also seem strange that the portrait of an Indian chief in a war bonnet was on U.S. one-cent coins during the Indian Wars.  (Actually the design of the Indian head cent was based on a drawing of a 12-year old girl wearing an Indian war bonnet.) 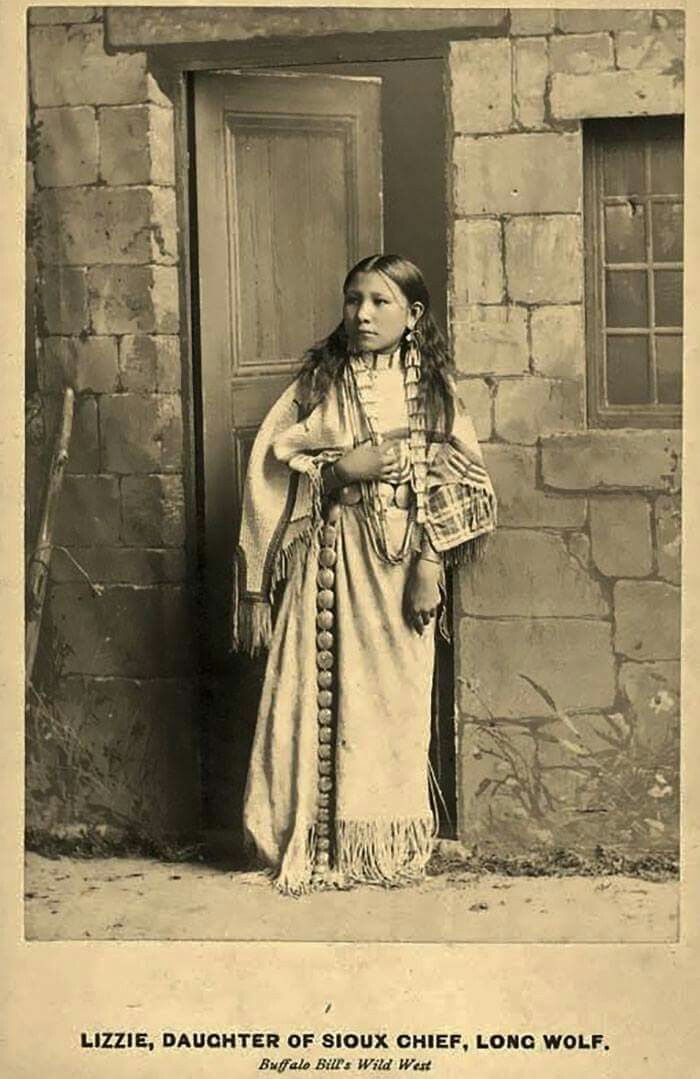 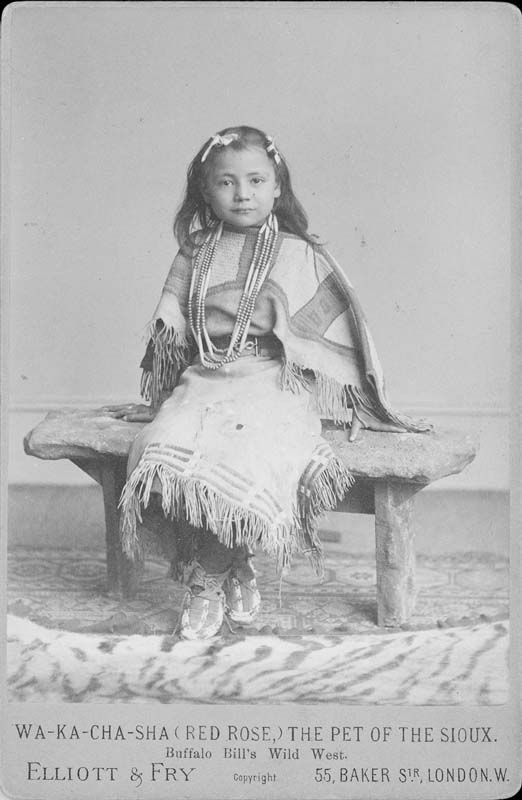 The next four photographs are also Sioux girls.  The Sioux, more properly known as Dakota or Lakota, depending on the dialect they speak, are perhaps the most famous Indian nation in the United States.  The Sioux dress, as shown in these photos, is what most people envision when they think of “Indian”.  In the present, some tribes that wore quite different clothing formerly have adopted clothing based on the Sioux for ceremonial occasions.  Two of the photos are by well-known photographers, John Alvin Anderson and Edward Curtis.  The beaded swastikas on the dress of one of the Lakota girls represent a common symbol, widely used by many American Indian tribes long before the German National Socialist Workers (Nazi) Party made it infamous. 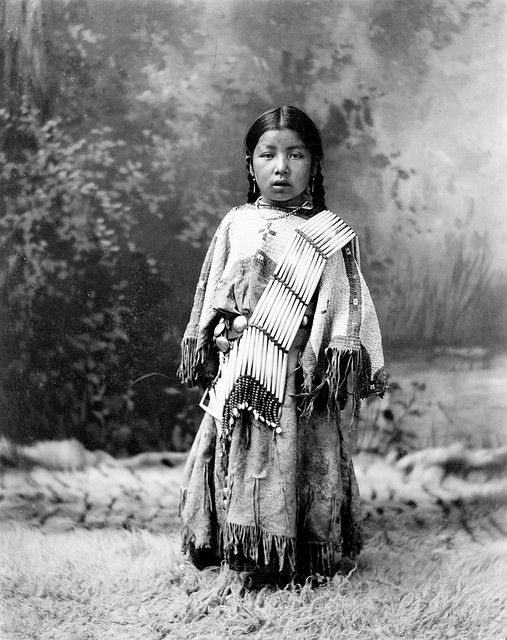 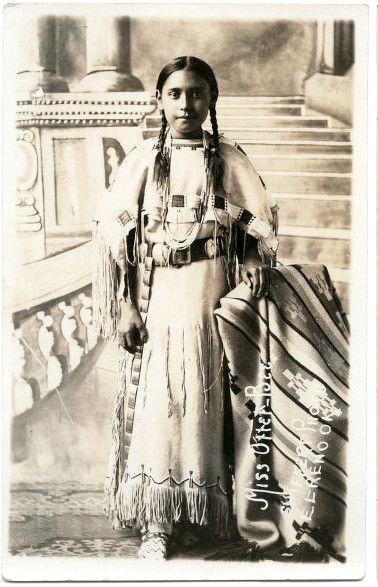 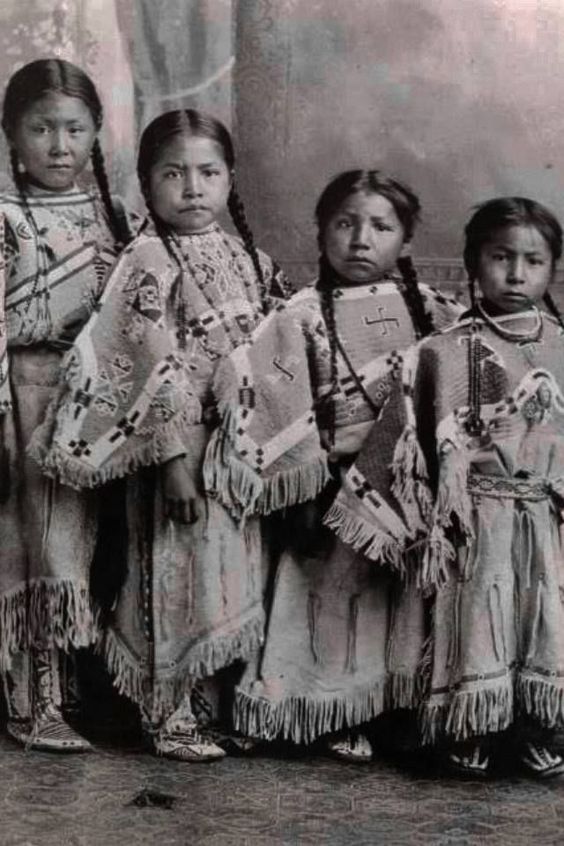 The following five photographs are of girls of various tribes from the United States.  The first is a studio portrait of two Kiowa girls in fancy dress.  The second is a postcard portrait of a pretty Mesquakie (aka Fox) girl.  The third is a tinted postcard cute little girl of an unknown tribe.  The fourth is a Hupa girl of California wearing elaborate beadwork.  The Hupa are one of the few tribes to retain most of their land to the present time.  The fifth photo shows a Seminole mother and daughters in Florida.  The monochromatic image does not show the bright colors preferred by the Seminoles and related Mikasukis for their dresses. 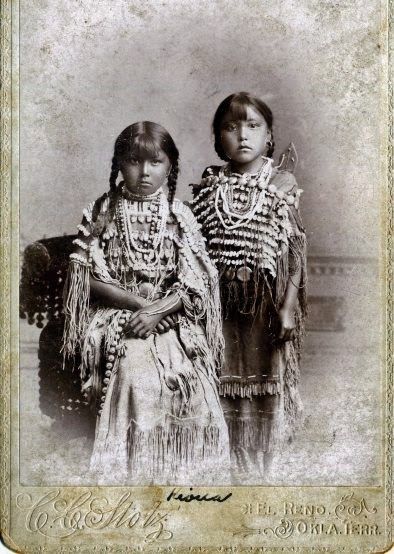 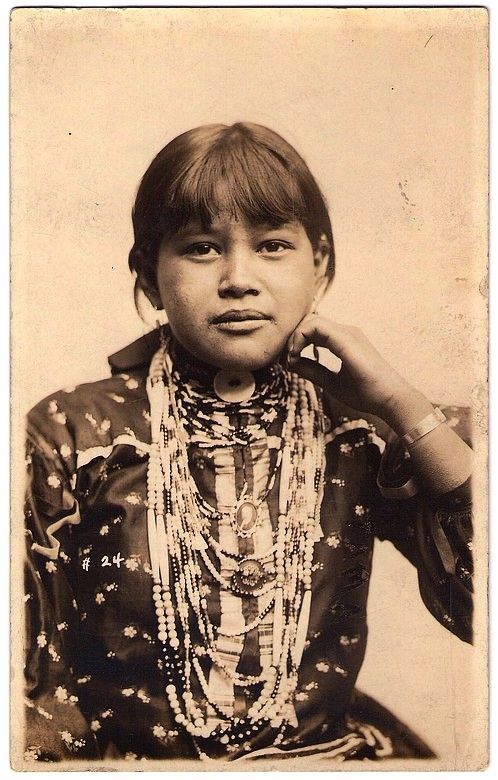 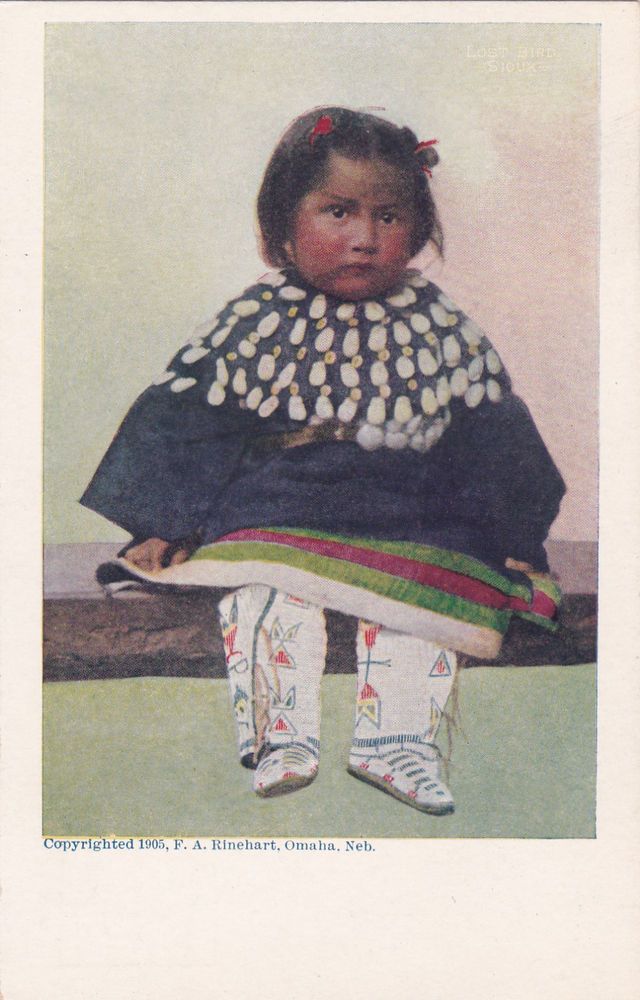 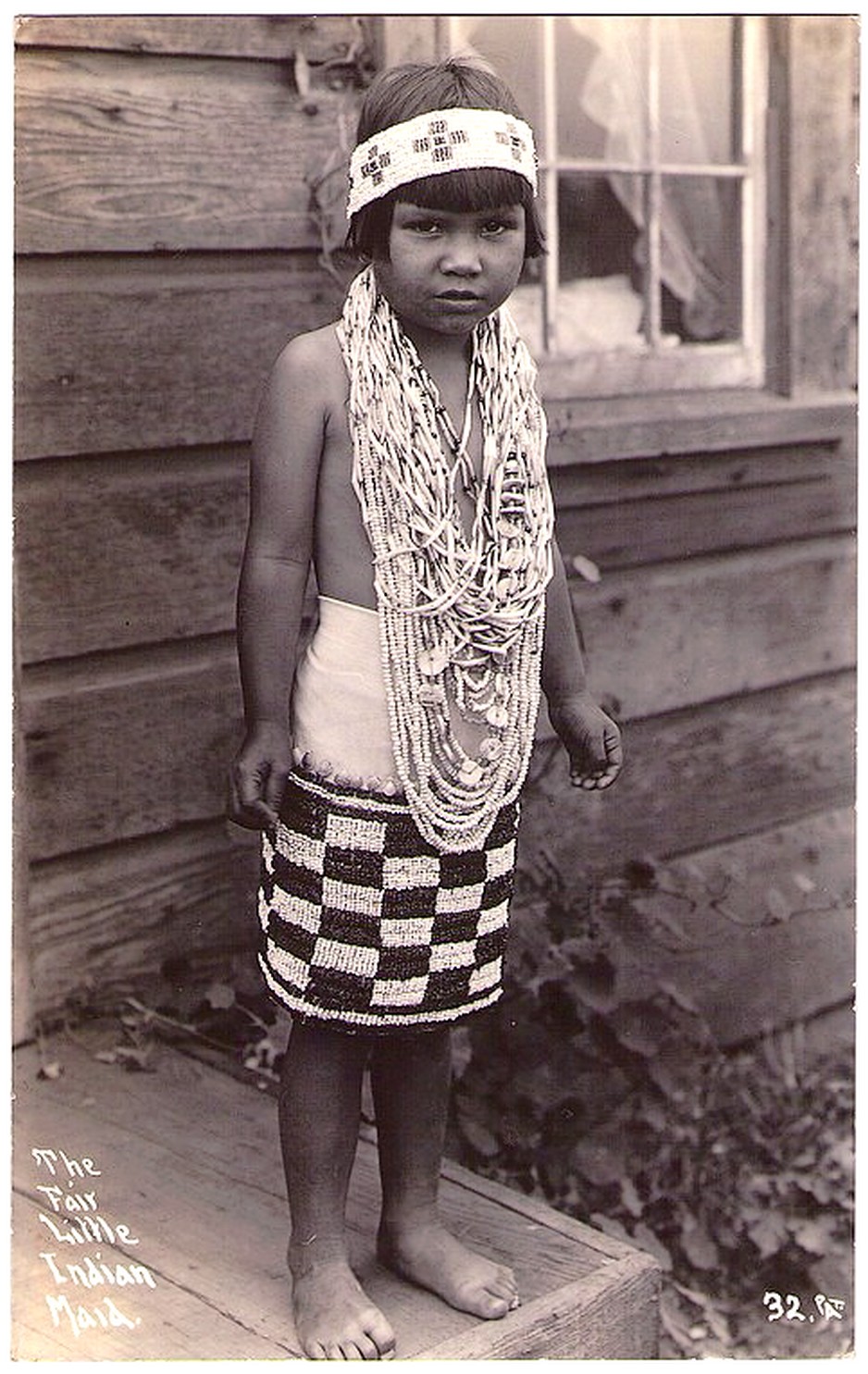 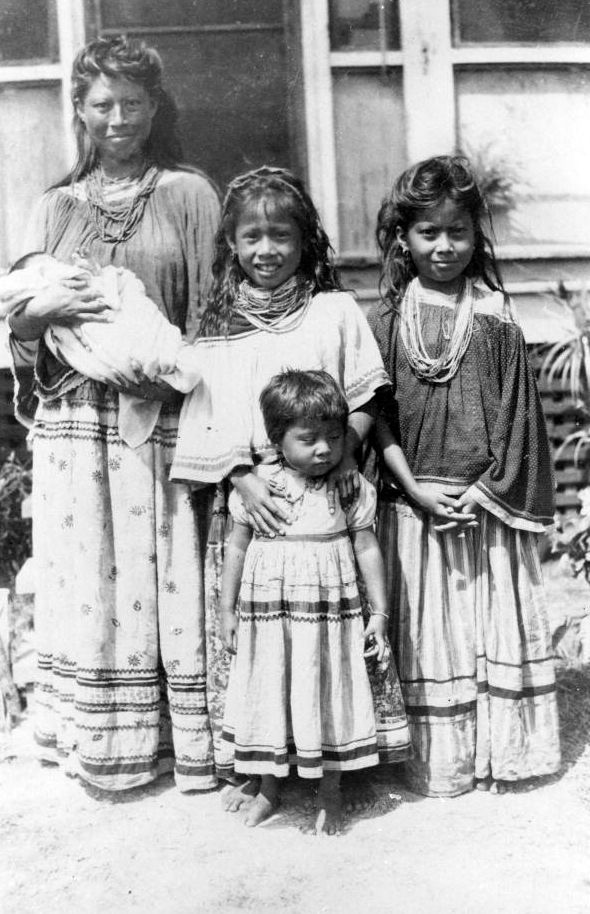 The American Indians are the original people of the continents of North and South America.  So far, this post has only mentioned Indians of the United States.  The following photos are all of Indians outside of the United States.  The first is a portrait of a Stoney girl posed in front of Tipis in Banff, Canada.  The Stoney Indians are closely related to the Sioux, and speak a similar language. 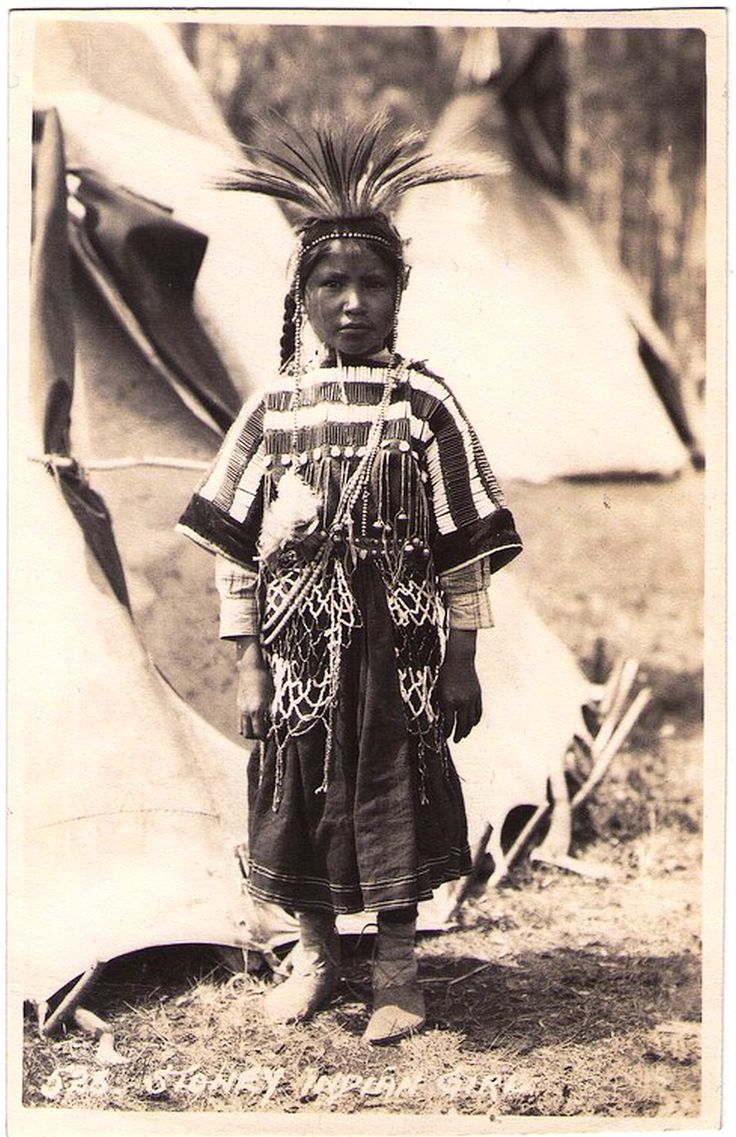 The next photo is from Mexico.  It may be found on the official Mexican government site for The Instituto Nacional de Antropología e Historia here.  Although the girls are not specifically identified as Indians, they have Indian features.  Most Mexicans are either Indian or an Indian-White mix, and it is unlikely that girls of the Mexican elite white class would bathe outdoors in a river.  The girls’ pose seems a bit unnatural, and their facial expressions seem to imply they have been chastised.  I don’t know the story behind the photo, but this is my idea of what happened.  Scott, the photographer, was making a photographic record of life in the area.  Bathing in rivers is a typical part of life, so he felt that he must photograph the girls, perhaps when they were in the water so most of their bodies were not visible.  When the girls saw the photographer, they got out of the river and posed naturally.  Scott then reprimanded them for their lack of modesty, and instructed them to adopt the shy poses.  This is merely my personal interpretation of the photo, but it seems to fit the poses and facial expressions. 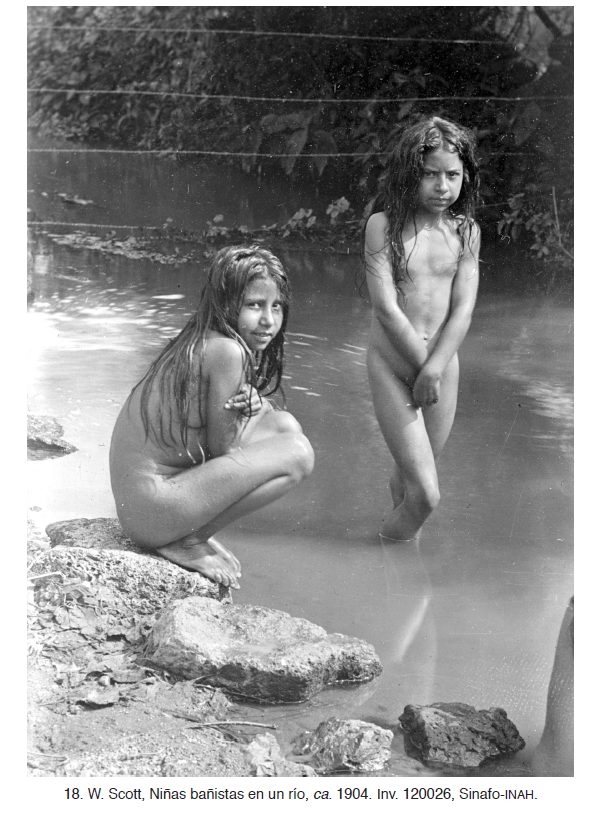 The next photograph is a postcard from Brazil.  This photograph of an Indian mother and daughter was posed, yet appears much more natural than the previous photo from Mexico.  I was not able to find the photographer or date of the picture, but when researching it I found an image of the postcard with cancelled Brazilian postage stamps affixed.  This demonstrates that in Brazil, the postcard was respectable enough to be sent in the mail, in spite of the nudity of the subjects.  I wonder if the postcard would be acceptable to postal authorities in this country.