Diyan Achjadi spent her girlhood in Soeharto-era Indonesia before settling on the trendy Canadian West Coast as associate professor of visual arts at Emily Carr University.  Sometime in the early 2000s the idea for her Girl character came to her as an understated and ironic way of commenting on heavy issues.  Her first show set Girl in various hot-topic settings usually in play or where people were naive to the danger or seriousness of the subject.  Achjadi commented,

“I have been particularly interested in the potential of illustrated narratives, and in the ways the fictionalized environments have the potential to unpack real-world situations, and question and critique the world that we physically inhabit. I use a visual vocabulary borrowed from children’s media – toys, books, objects, and other forms of productions aimed at children – which often depicts the adult world in a miniaturized, simplified, and sanitized form, representing it under a guise of play, innocence, and harmlessness.” 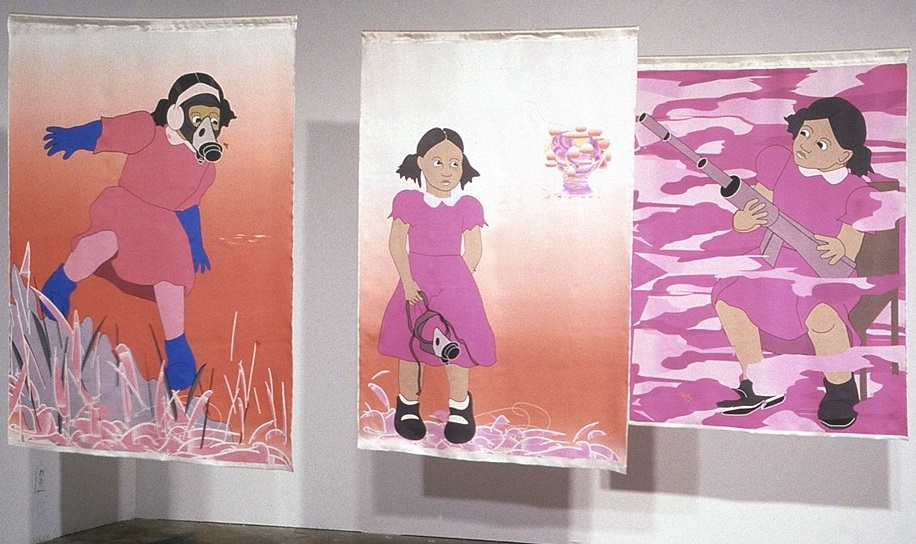 Shortly thereafter, in the wake of the tsunami that wiped out coastal Aceh in northern Sumatra, Girl became a way for Achjadi to explore impressions of the way reports of disasters were covered far from her new locale.  Distanced from her homeland, Achjadi’s only connection with the enormous things happening in Indonesia was through the internet, television and telephone.  Her Girl works from 2007 through ’09 featured her signature character in the midst of invasions, bombings, tidal waves and volcanic eruptions.  Girl largely maintained her indifferent composure—maybe an allusion to the tidak apa apa resignation of Indonesians or the passive nature of the stereotypical little girl?

At the end of the decade, Achjadi’s use of Girl shifted again.  Now she began to play with the machinery informing identity.  Achjadi had grown up in a new nation, with shifting boundaries, and threatening to rip apart in violence.  The dictatorial government bombarded the people through every medium with nation-building propaganda.  Achjadi herself was made to participate in considerable flag raising, marching, “group calisthenics” and singing to the glory of her recently manufactured country during her school-girl years.  In retrospect she had a kind of fascination with the process.

As the series progressed, it became deeper, and took on a kind of eerie metaphysical character.  Achjadi writes,

“Girl is both singular and plural: she is a figure that exists in a world populated only by other Girls, seemingly identical in features and dress. Sometimes she is alone and isolated; other times she is multiplied into a perfectly uniform army, marching, saluting, and exercising in formation.”

Far from cute and innocent, the girl becomes something surreal as endless uniformed girls salute in allegiance to the image of themselves.  The following piece might remind one of the North Korean Mass Games.

This all culminates in her “The Further Adventures of Girl” show.  Critic, Malakoteron, wrote quite insightfully on this compilation of works,

“From wall to wall one encounters the face of the iconic ‘girl’ who is multiplied in each medium. She’s a flat and simplified medley of many of the cliches of girlhood rendered into an easy to swallow and mass produced form. Cartoons, posters, flags and little sculptures reminiscent of lawn ornaments all cross reference her figure in a series of reds and lush colours. Sometimes it feels like looking at Dora The Explorer filtered through a post-Superflat version of Maoist propaganda.

It starts out seemingly innocuous, like a little bit of children’s TV and, through its repetition and its re-articulation, gradually becomes obvious as a technique of aggression.

They’re attractive and decorative and this is self-consciously reflected in the work, with the girl waving flags of herself, perfectly enclosed in her own narcissistic paradise. As Momus once said in respect to certain trends in Japanese youth culture, it’s a celebration of ‘cute fascism’.” 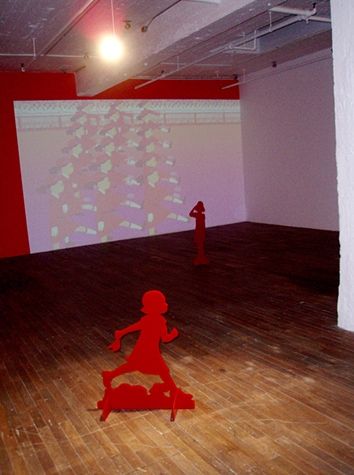 By her later showings of Girl, it would be difficult for most to intuit a commentary on Indonesian national identity.  At face value, the show had evolved into an analysis of the coding of girl identity itself: the girlification of girls.  But Achjadi does not regard girls as made of “sugar and spice and all things nice”; instead, we are shown a process of violence, mass indoctrination, intimidation, superficial molds and robotic conformity.

And then like almost anything artificially impressed into the living body, it is rejected.  Girl finally screams, gesticulates, riots and rebels against herself; she fights herself, tears herself down and attempts to escape the Girl space. 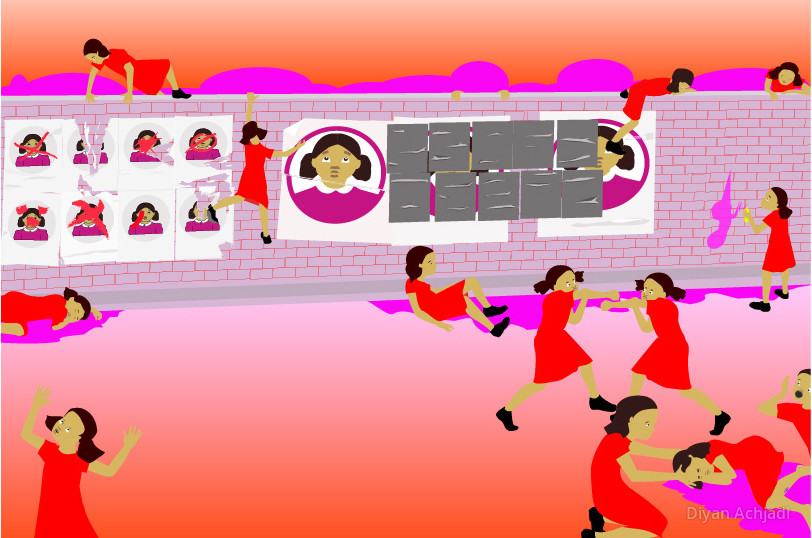 Diyan Achjadi’s personal site is here,  while she delivers a thorough lecture on Girl at this link.  An animated assemblage of her Girl work is also available.