Toni Frissell (1907–1988) was a documentary and fashion photographer known for her portraits of famous people and coverage of World War II. Because some of her portraits covered families, children were sometimes captured by her lens. 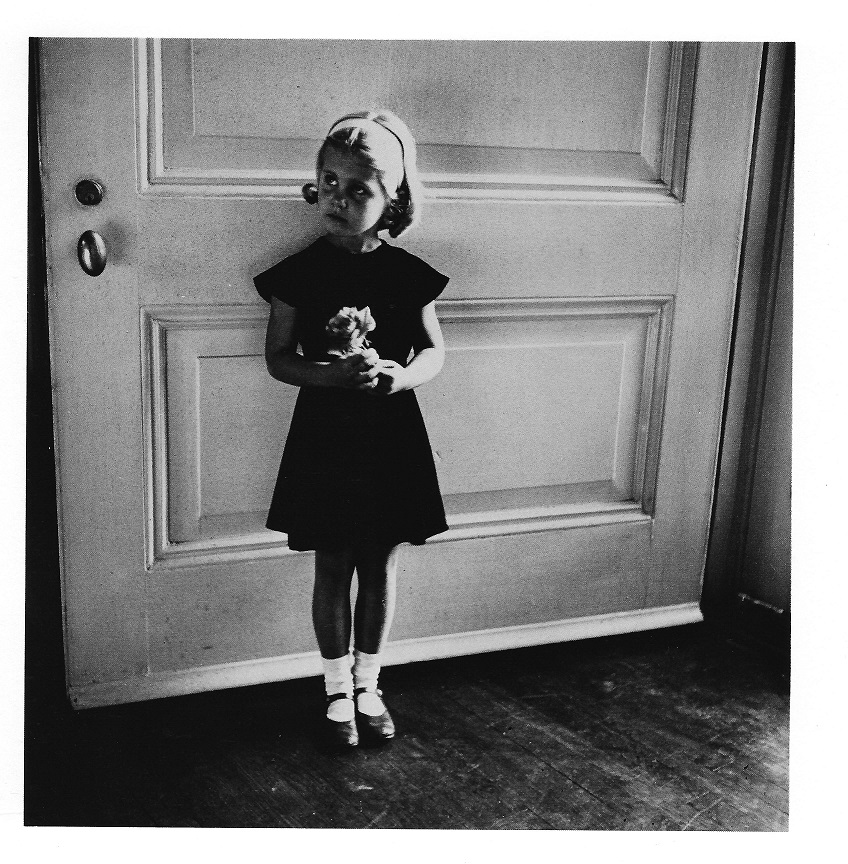 Not only did she shot well-composed portraits but sometimes she would shoot her subjects in some kind of period dress. 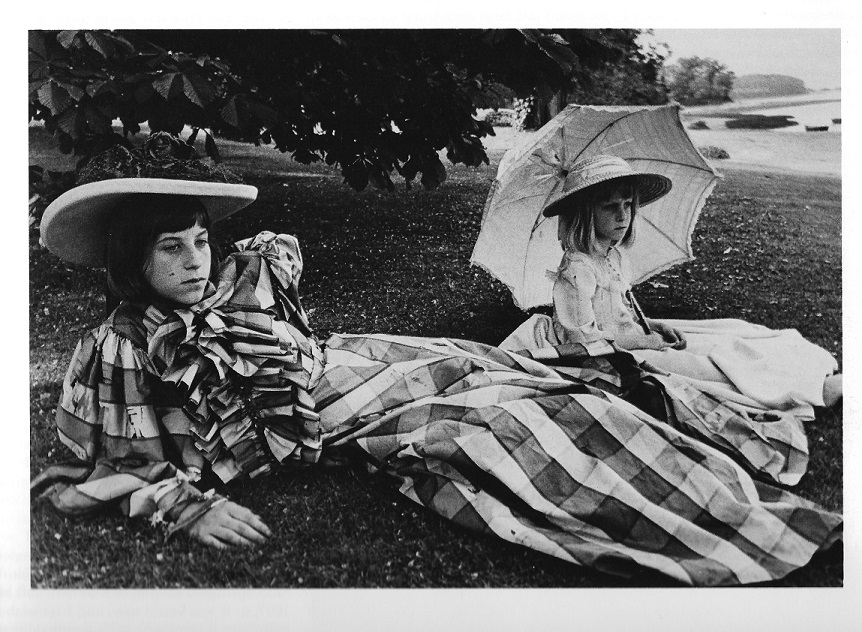 The only lead I received on the painter Walther Firle (1859–1929) was this one image. Very sweet but it is not known how many of his images may have depicted children. 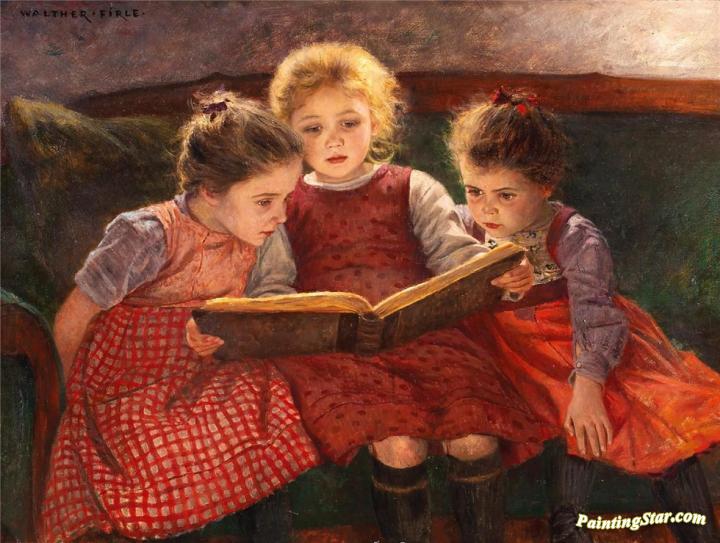 Since the advent of the internet, there sure has been a lot of crazy-ass stuff out there. Anna Maltz says she is an avid knit and sweater-spotter and has published a couple of books. Most intriguing are her knit suits which cover the entire body. This photo is of one of her creations and it blurs the link on nudity. Is it or isn’t it? I just couldn’t resist showing this one and it does have a little girl in it, so it’s legit for this site.

The problem with this artist is that she has a relatively common name and it is difficult to distinguish her from others with a similar name. Nonetheless, I share this piece called Winter Stories and perhaps readers can do a little digging, especially on Russian sites. 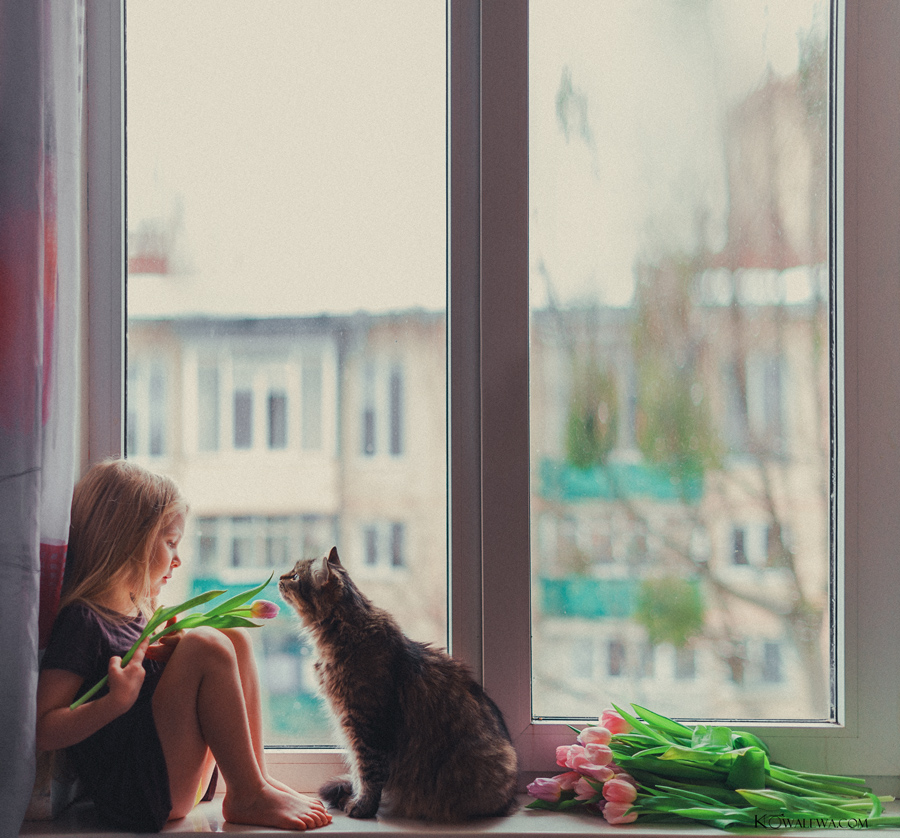 This is one of many images that Pip collected and wanted identified. A few readers came forward and did exactly that. Takero Kawabata is a Japanese photographer covering special public events. You can be forgiven for thinking this is a shot from Carnival in Brazil, but in fact—like the Mardi Gras in the US—it is an imported event. Every year (circumstances permitting) in late August, Japan hosts the Asakusa Samba. This girl is one of many contestants who participated in the samba parade contest. Many dancers do come from Brazil to complete and it goes without saying that the best dancers get their start very young. 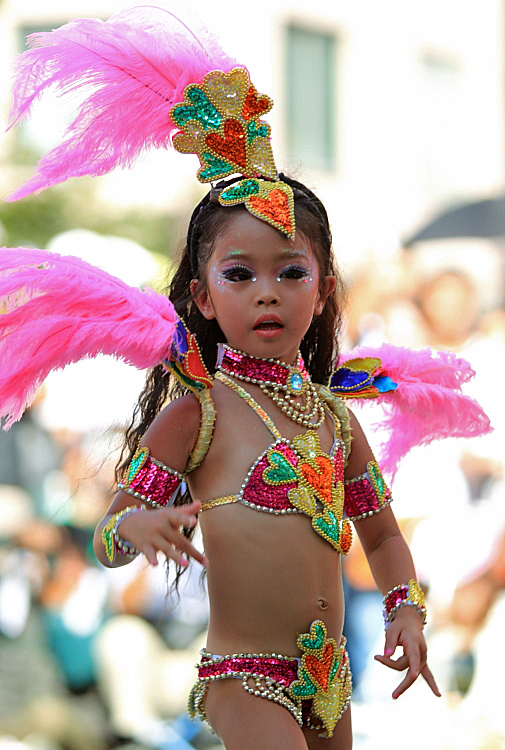 Genja Jonas (1895–1938) was a German photographer. Although she did not focus by any means on children, I did come across this interesting artifact. 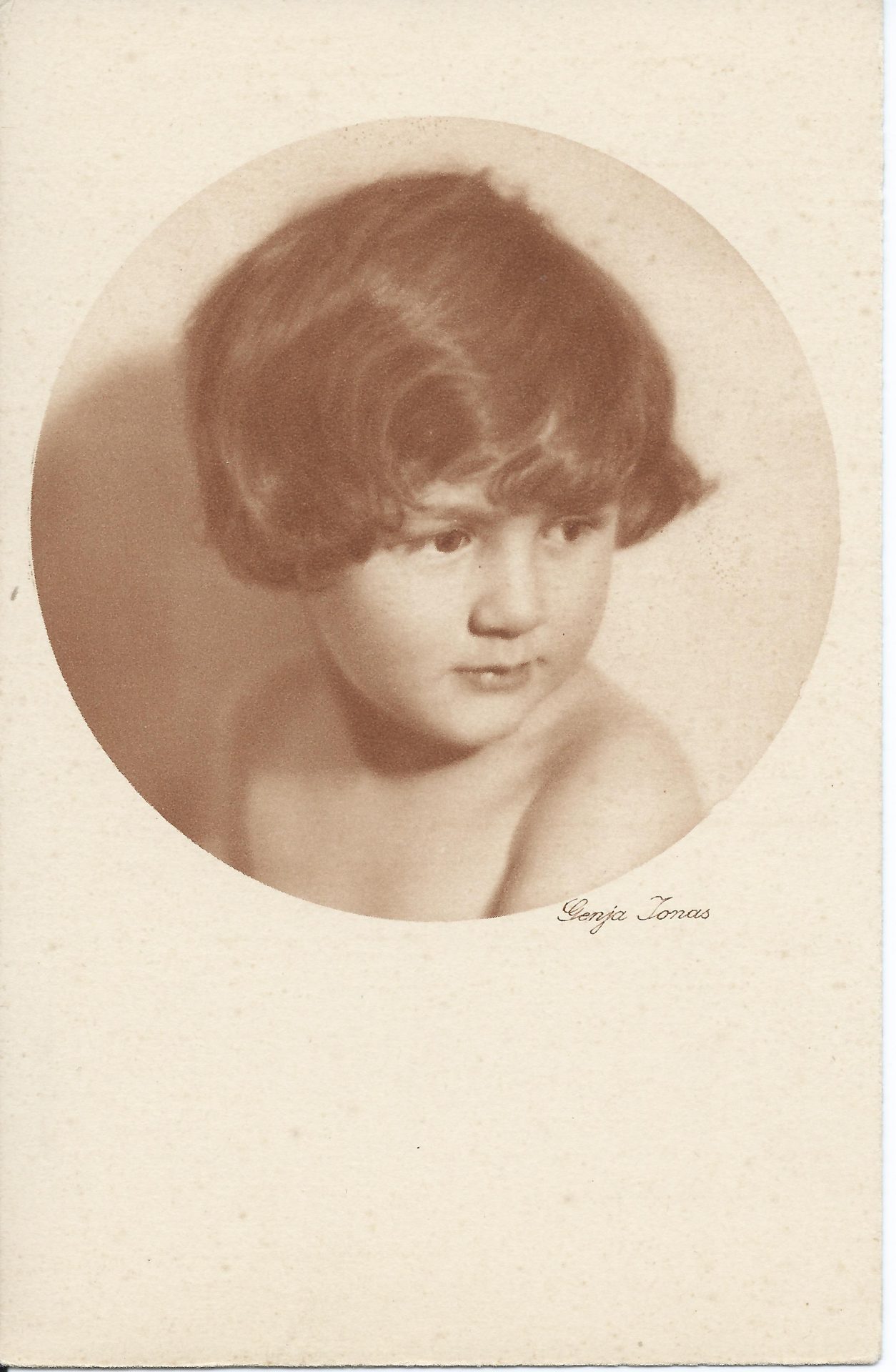 Ernst Haas (1921–1986) is one of the most important photographers of the 20th Century and was one of the pioneers of color photography. Born in Austria, he later established himself in the US. As a photojournalist, one can come across some of the most unusual scenes. Christian found this image but didn’t know which one had the correct contrast so I offer both.

Emily Garthwaite is an active photojournalist currently specializing in the Middle East. The image below is an interesting effect. It seems that the photographer liked it so much that she did something similar with her infant nephew. This is merely speculation, but it is possible the artist composed the shot this way to accommodate the requirements of her subjects, many of whom are Shiite. 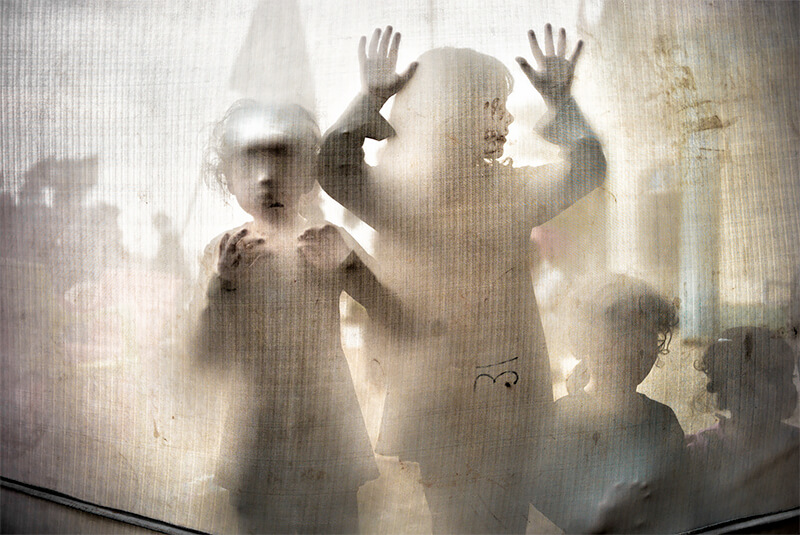 Al Hillah was one of the areas hit hard by the US invasion of Iraq in 2003 and Garthwaite is, in part, documenting life in the aftermath.

A few years ago, an artist friend of mine acquired this piece and showed it to me. Geoffrey Sneyd Garnier (1889–1970) was not only an artist but a printmaker as well. This particular etching and drypoint is of the man’s own daughter (either dressing or undressing, it’s hard to say). 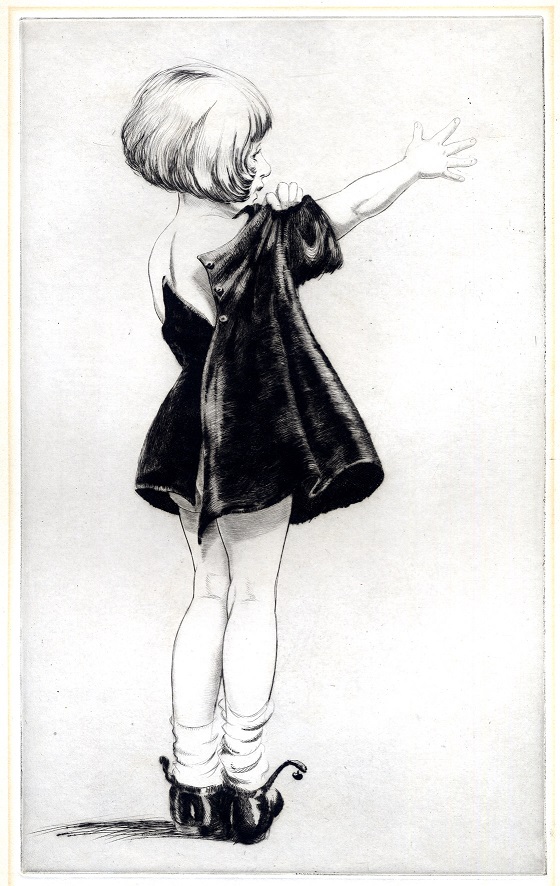 Given all that has been going on, I feel like this is a great time to publish a ‘State of the Blog’. As can be seen from the last post, our host was ordered by UK police to shut down this site, Agapeta and Graham Ovenden’s two sites. As has happened a number of times in the past, we have guardian angels who appreciate our mission and assist when they can to keep us afloat. Thank you all so much for your support.

Status of Allied Sites: Because Pigtails and Agapeta use the WordPress template, they were the easiest to reinstate. What I understand is that Agapeta is publicly visible right now under the same domain name but with an incomplete database. It is expected to be completely restored during the coming weekend. Graham’s sites (The Graham Ovenden personal site and Garage Press) will take longer. Our former host did not like the unwieldy structure of WordPress and so used something he was more comfortable with. Our new host needs to familiarize himself with that protocol before they can be restored. All domain names have been successfully transferred and there are no changes to any of the web addresses.

Our New Host: There is something of an interesting story about our new host. As readers are probably aware, there is a lot of controversy with a site such as ours which focuses on the “Cult of the Girl Child”. Another sensitive topic these days is the way young girls are sometimes portrayed in fantasy situations in manga and anime including sexually suggestive or even explicit content. There are many who want to make the important distinction between fantasy and the advocacy of physical abuse. In order to protect this material (some with artistic or political merit, Debbie Dreschler for instance) from undue censorship, a team was put together to figure out a “bulletproof” way to have this material be available online despite heated objection by the lay public. The problem with corporate management of domain names and websites is that with their bottom line of profits, they are simply too susceptible to public opinion and anything that is not worth the trouble gets shut down. This has happened many times with Pigtails as many of you know. The idea is that our host will boldly deal with the ridicule, complaints and cyber attacks on the sites to keep them up and running. In addition, the sites will be run in jurisdictions that are are more understanding of the real challenges of freedom of speech (definitely not the UK or the US). I don’t want to give you the impression that this is some kind of obstinate rogue operation; when there are legitimate legal issues, such complaints can go through proper legal channels (namely, the courts) and will be dealt with according to the rule of law. This program is in its early stages so I imagine hosting Pigtails is an important test case, especially because of our size and the fact that we don’t really push the limits that much except in the service of academic pursuits.

Our Priorities Going Forward: I have not had much time for this site recently, but it is important that it remain active as a resource. I will continue to make occasional posts, but my focus will be on completing the databases: first, completing the ‘Artists by Name’ page and then putting together a bibliography of the PIgtails Library.

Contributors Pulling Their Weight: Since I am less active, I do urge readers to make contributions by writing short pieces. I understand that many of you are not confident in your use of English but as Editor-in-Chief, it will be my responsibility to edit your work to make sure it is presentable and meets our standards of content. Moko, for instance, is planning on making monthly contributions. A few others have promised to do works and I think I will make the rounds and ask them to get on with it.

The Charming Thing about Conspiracies: The word “conspiracy” has a pretty straightforward definition but in modern society, it is regarded with ridicule even when there are real machination at play. One of the key reasons Pigtails was brought down the way it was is due to flagrant (UK) police corruption. Let me be clear that a great many policemen and detectives are honorable and do their work with an eye for real service to the public. And every organization of course has it’s bad seeds as well. It is mostly because of this site’s support of Graham Ovenden and my personal role in helping get his first websites established that has made us such a target. Certain individuals in the UK police force have real reasons to be concerned about their misbehavior being exposed and the public demanding action. They cannot afford these claims to get any traction in the media. Why am I so confident? As part of the conditions in the conclusion of the Ovenden court case, the judge ordered that copies of police records used in the prosecution be given to the defendant. In one of my recent visits to Graham, I got to see one of those documents and my jaw dropped! Right there in the police’s own written records (which I’m sure they never expected would see the light of day) their strategy and overt manipulation of the evidence and witnesses is actually spelled out. Graham assures me that these papers are now in a secure place but it is uncertain if political circumstances will ever permit an airing (the CCTC declined an appeal despite overwhelming evidence) of this particular misconduct and the escalating and vindictive efforts to cover it up. That is all I wish to say about it for now since I have only seen a few of these items personally. I only want to impress upon readers that attacks on us are not only a matter vocal self-righteous complaints of perversion but a real threat to the careers of certain members in the UK police hierarchy (and possibly officers of Her Majesty’s courts). I wish I could somehow disentangle this issue from our usual work, but I would consider this an act of cowardice. I understand that Graham has shared a few of these details on his website which you can read when it goes back online.

My First Act: The thin end of the wedge in bringing down Pigtails was the request that images from the Debbie Dreschler post be removed because they portray child abuse. Ironic, since the comic book artist’s point was to bring attention to that exact issue. My first act this weekend will be to replace those.

It is a delight to once again welcome readers back to PIgtails in Paint. We look forward to your continued support. -Ron, Editor-in-Chief