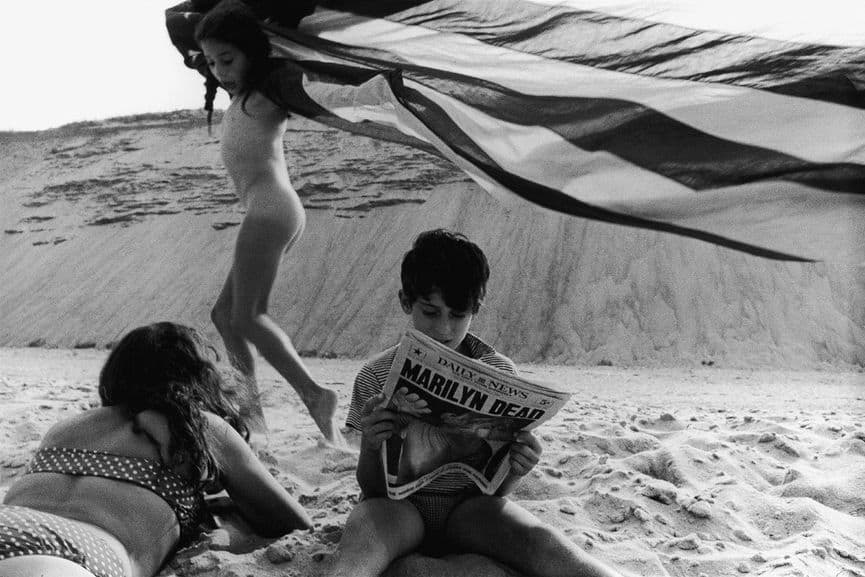 Robert Frank took this photograph on the beach in Wellfleet, Massachusetts in August 1962. His wife Mary and their two children, Andrea and Pablo are in the photo.

Robert Frank was born in Switzerland in 1924, and emigrated to the United States in 1947. His first job in America was as a photographer for Harper’s Bazaar. He later worked as a freelance photojournalist, but art photography was his passion. From 1955 to 1957 the Frank family traveled around the United States, and Robert took thousands of photos illustrating American life. Eighty-three of these photographs were published in the photo book Les Américains in France in 1958. Les Américains is Frank’s most famous work, and one of the most influential photo books of the century. As one who grew up in Europe, Frank could see America as an outsider, noticing things that a native of this country would not. The book was published in the United States in 1959 as The Americans.

Frank shifted his interest to making movies at this time. In 1959 he directed the beatnik film Pull My Daisy, written by Jack Kerouac, starring Allen Ginsberg and Gregory Corso. Robert Frank’s most famous movie is his 1972 documentary of the Rolling Stones.

The Wellfleet Beach photo, which was not titled by the photographer, is one of Frank’s most famous. Andrea, nine years old when the photo was taken, is the center of attention. It is obvious from the pattern of her suntan that she did not habitually go nude on the beach. In addition, a nine-year old girl would not be allowed to be naked on a public beach in the USA. The photo was apparently staged in a part of the beach with no people other than the Frank family. Andrea carries an American flag.

Andrea’s mother, Mary Frank, is on the left but her face is not visible. Andrea’s eleven-year old brother Pablo (named after Pablo Picasso) is on the right, and holds a copy of the New York Daily News reporting the death of Marilyn Monroe. Marilyn Monroe was an American icon who was famous not only as an actress, but also as a model for nude photographs in Playboy Magazine. I get the impression that Andrea’s nudity and flag are meant to memorialise Marilyn Monroe.