Silvino Simões Santos Silva was born in Portugal in 1886, and emigrated to Brazil in his youth. He began his career as a photographer and painter in Manaus, Brazil in 1911. Silvino Santos is most famous as a cinematographer filming documentaries about the Amazon region. He filmed No País das Amazonas in 1922. Theodor Koch-Grunberg’s explorations in South America were chronicled in Silva’s 1924 film No Rastro do Eldorado.

Santos was also a photographer of high repute, and early in his career, Julio César Arana commissioned Santos to film and photograph a very important inspection of his rubber production operations in the Putumayo River basin of Peru. Rubber was becoming much in demand during the late 19th and early 20th centuries. The Amazon rainforest was the main source of rubber at that time. Peruvian Amazon Company, owned by Julio César Arana, was one of the largest rubber companies. People would go out into the rainforest to find and tap rubber trees, then the latex would be brought to company outposts. 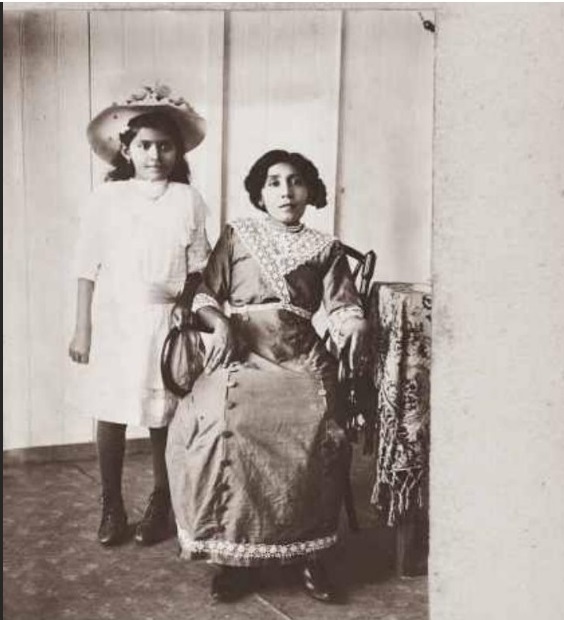 Local indigenous tribes were the only source of labor for collecting latex, and since most people would not voluntarily perform such hard labor for the low compensation, the tribes were captured and enslaved. Workers who did not return their quota of latex were beaten and tortured. Some Indians fought back, but were no match for the superior armament of the rubber companies. Some fled to the most remote parts of the rainforest. It is rumored that their descendants are still living in these remote areas, in tribes that still avoid any contact with the outside world. Over 30,000 Indians were killed in the Putumayo region alone. Julio Arana was responsible for mass murder, but he didn’t care as long as the profits kept rolling in.

Santos took over 200 photographs, of which 187 were chosen by Carlos Rey de Castro and Julio César Arana to be put in an album titled El Album de fotografias tomadas en Viage de la Comisión Cónsular al Rio Putumayo y afluentes-Agosto á Octubre 1912. At the time, this album was widely distributed in an attempt to refute the charges against the Peruvian Amazon Company. About a hundred years later, a single surviving copy was discovered and published on the internet here. Some of the photos include young girls, and are on-topic for Pigtails.

The first photo in this article shows a cute little girl standing beside her mother, who is seated. The caption of this photo, which was written in English, states “The husband of the lady sitting was eaten by the Boras.” Sympathy is intended for the little girl who lost her father, and the woman who lost her husband to the “savage wild Indian cannibals”. Showing how the good people of the rubber company brought the blessings of civilization to the Indians is a theme of the album. The Boras are of the Huitoto (aka Witoto) stock. They did not routinely practice cannibalism, but at times sought to gain courage from an enemy warrior by eating his flesh.

Next is a photo of a Huitoto chief and his two wives. Santos posed them with interlocking arms, looking directly at the camera with dignified expressions. This was hoped to be seen as an example of the healthy, happy Indians working for the rubber company. No photo of anybody with scars from beatings will be in the album. Note that one of the wives was a child bride, a topic covered in a Pigtails article here.

Muchachos de Confianza (Trustworthy Boys) and their wives are the subject of the next photo. This is much like the previous photo. Indians employed by the Peruvian Amazon Company are dignified and healthy. At least half of the wives are too young for marriage by our standards. Females are in the front, perhaps because it was thought that nude females are more photogenic than the males. Muchachos de Confianza were Indian quislings who cooperated with the company to oppress others. When there were reports of abuse that could not be denied, Julio Arana attributed it to the excessive zeal of the Muchachos de Confianza.

The next photo, of two married couples, was meant to show Indians treated well by the rubber company, same as the previous two photographs. Another similarity to the previous photos is that the girls appear to be too young to be wives. Perhaps Silvino Santos emphasized adolescent girls and young women because he felt they would attract the most attention, and thus best serve the purpose of propaganda photographs. 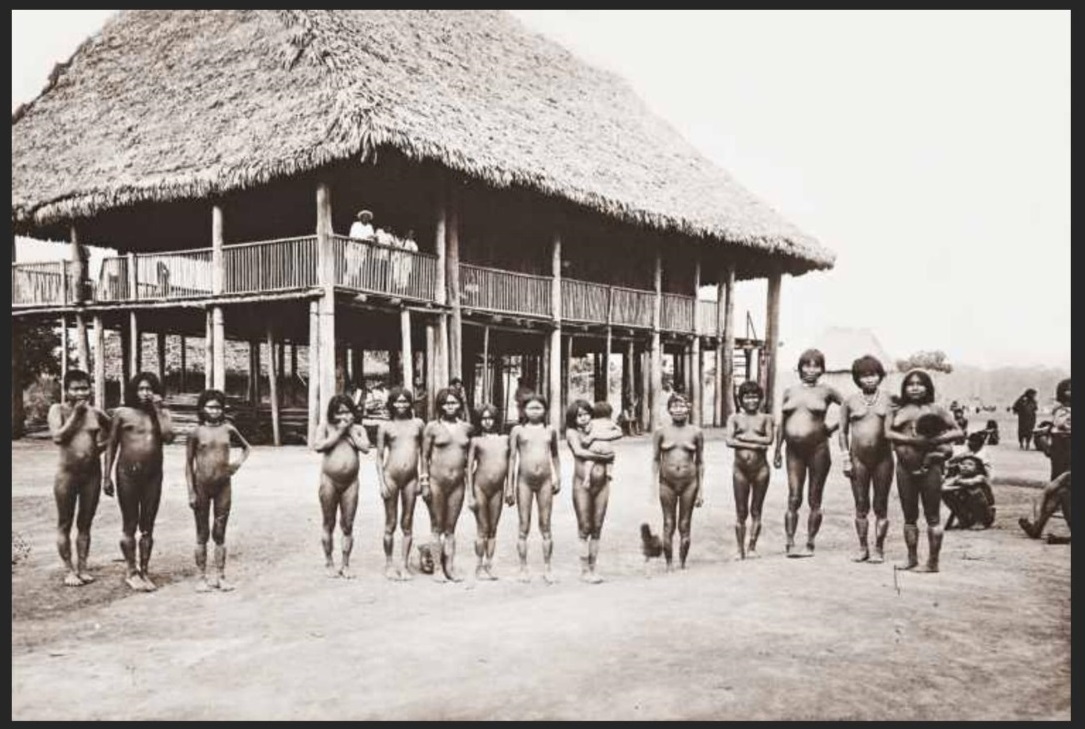 Indios Jóvenes is the title given the next photo, even though the subjects are all female. Carlos Rey de Castro refers to them as “indias” in his note on the photo. Rey de Castro, in the note, asks why Mitchell (the British Consul) described the girls as “weak”. Rey de Castro asks if it could be because of their lack of modesty. 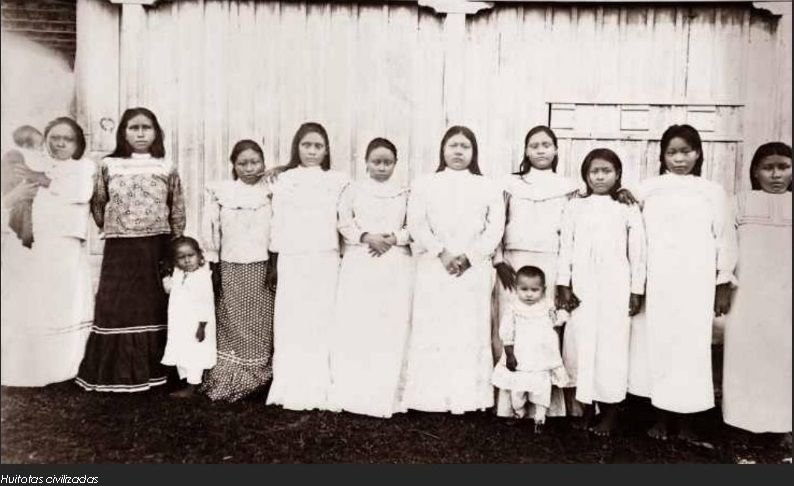 Huitotos Civilizadas is the title of the last photo by Santos in this article. The women and girls are shown as respectable civilized people like us, all because of the benefits provided by Julio César Arana and the Peruvian Amazon Company. Clothing in this photo seems to be fancy dress freshly laundered and put on for the photograph. The Huitoto tribes in the area did later adopt western-style clothing, but everyday dress was less formal than shown here.

Today, even many missionaries do not insist on western clothing. In the warm very humid rainforest climate, clothing that is not frequently changed and laundered provides a breeding place for bacteria and fungus that can adversely affect the health of the wearer. Today the Huitoto wear clothing like White Peruvians (estilo criollo), but some tribes in tourist areas have devised a new “Indian style” that they wear when tourists visit. The last photo shows 21st century Boras dressed tourist style. This is the same tribe that allegedly ate the husband of the woman in the first photo.

7 thoughts on “The Propaganda Photographs of Silvino Santos”