I have no education or background in art, so there are many artists of whom I never heard before I started reading Pigtails and writing articles for it. In most cases it never bothered me that I had not known of these artists previously, but George du Maurier is an exception. Not knowing of him made me feel uneducated. He is the man who gave the English language the word “svengali” and the terms “in the altogether” for naked and “bedside manner” for a physician’s rapport with the patient. He is responsible for naming the trilby hat and the town of Trilby, Florida. His granddaughter Daphne du Maurier wrote The Birds, which Alfred Hitchcock made into a movie. George du Maurier inspired Gaston Leroux to write Phantom of the Opera, and his grandchildren inspired J. M. Barrie to write Peter Pan. George du Maurier himself was one of the most prominent cartoonists of Victorian England. 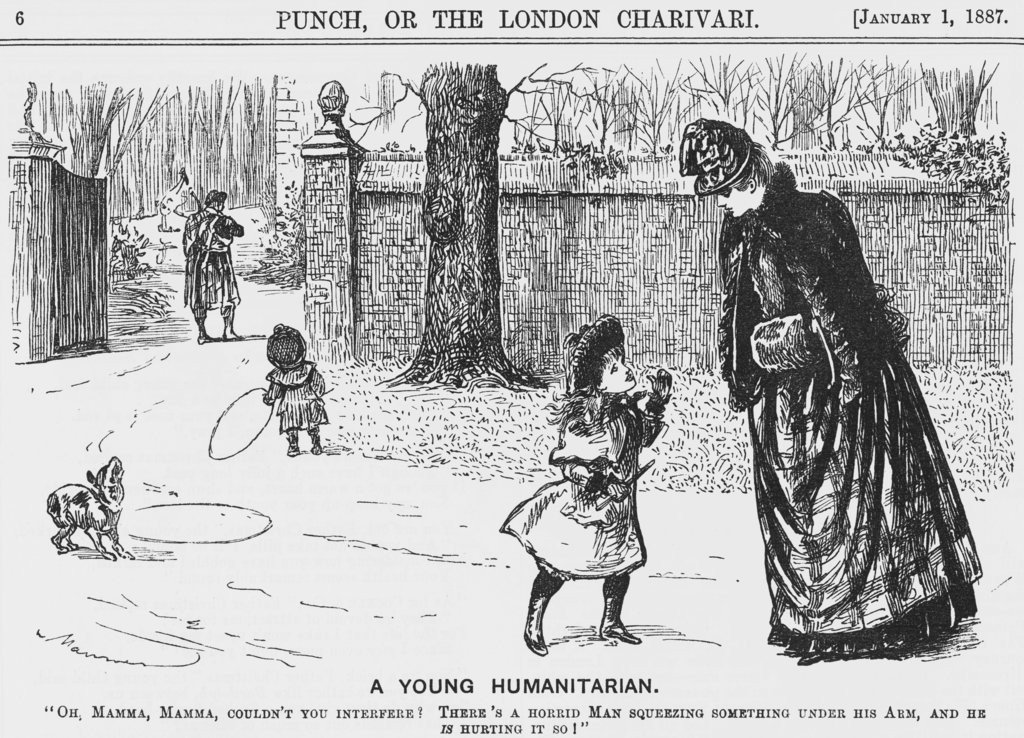 George Louis Palmella Busson du Maurier was born in France in 1834. He studied chemistry and painting. His passion for art was greater than his inclination for chemistry, and loss of vision in his left eye made drawing easier than painting for him. In 1865 he joined the staff of Punch, Britain’s leading satire magazine. His cartoons satirizing British society were very popular. I do not have the dates for most of the illustrations in this post, but all are probably from the period between 1865 and 1891 when du Maurier was an active cartoonist.

Du Maurier draws like Dickens writes, with plenty of elaborate detail. Du Maurier’s humor is subtle and droll. The caption for Chacun Pour Soi (Everyone for Himself) is “Mamma (sternly) ‘Now, Miriam, say Grace’. Miriam (who, for previous Misconduct, has been deprived of Pudding). ‘For all they have Received, let them be Truly Thankful.'” 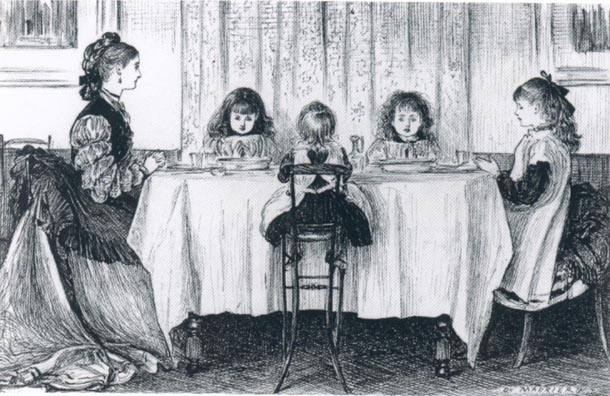 Girls in Victorian England were stereotyped as being quiet and demure. It is more unexpected, and therefore funnier for a girl to use a prayer to complain of her punishment than it would be for a boy to do the same. This could be one reason that girls are prominently featured in du Maurier’s satire, but I think there is another reason: girls and women are prettier than boys and men. Du Maurier may have simply liked drawing girls better than he liked drawing boys. In Chacun Pour Soi, he drew everybody at the table as female. In the last illustration in this article, Gentle Terrorism, it was necessary to draw an ugly character, and du Maurier drew that character as a man. 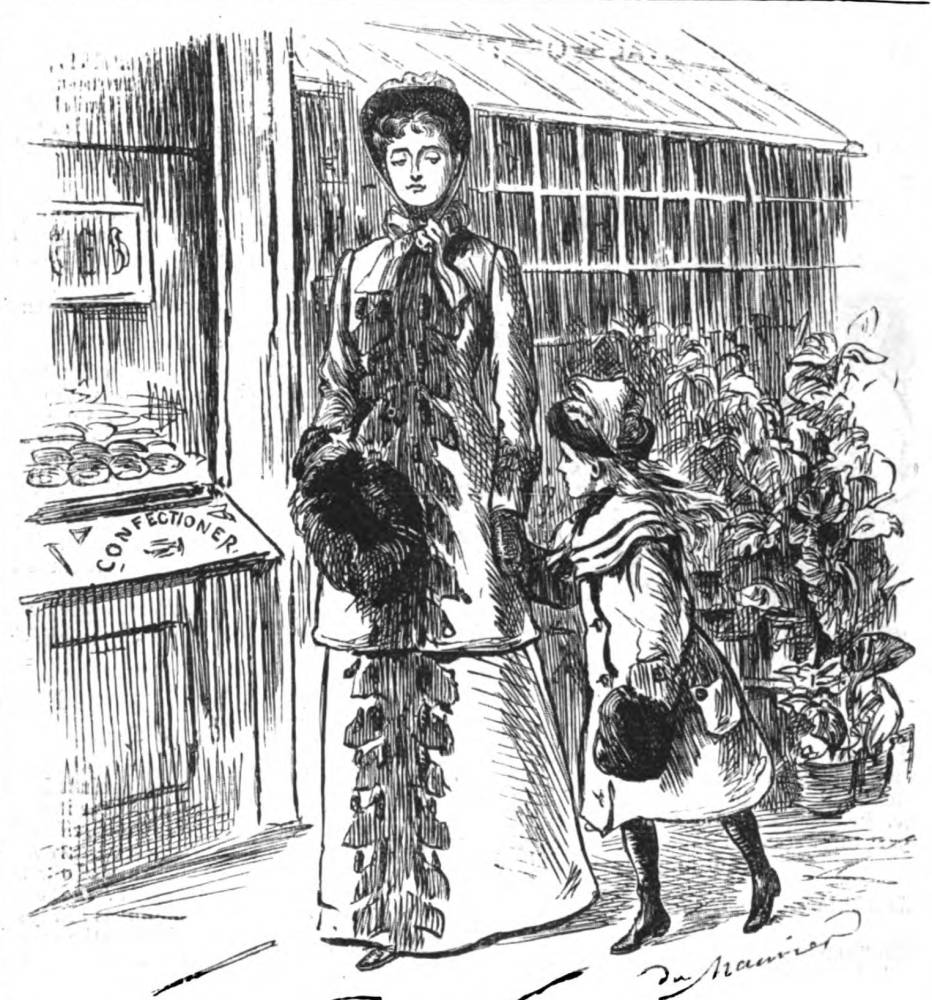 A Hint is captioned “Oh, Mamma, did you see those pretty flowers in the conservatory? I wish you’d buy me one! “It would fade before you got Home, Darling?” “Would it? Now, Buns don’t fade.” 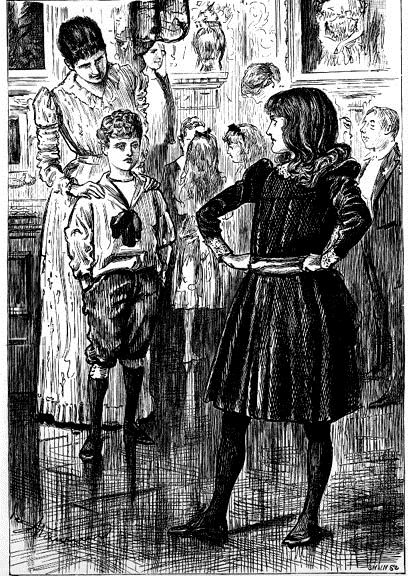 An Unpleasent Social Duty illustrates a difference between boys and girls that can still be seen today. Girls typically enjoy dancing to music and will do so all by themselves as young children. They often continue to like dancing throughout their lives. Heterosexual boys usually do not dance until they approach puberty, and then only as an excuse to socialize with girls; most boys never really enjoy dancing. An Unpleasent Social Duty is captioned, “Hostess- ‘Geoffrey, I want you to dance with that little girl!’ Geoffrey- ‘Oh, well, if I must, I must…!'” Note that in Victorian England, women’s hemlines were floor length, while young girls’ hemlines were knee length. 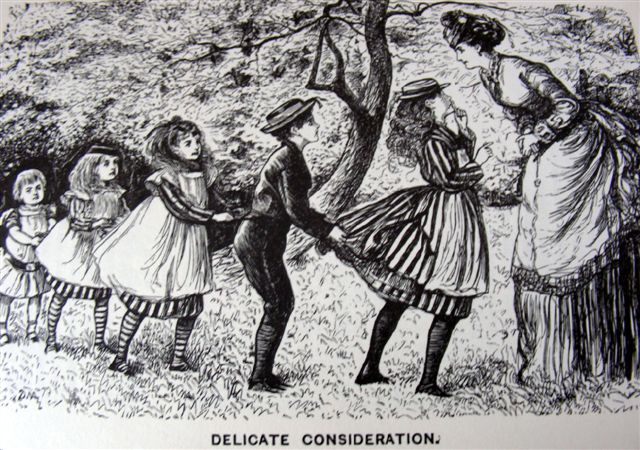 The next drawing is titled Delicate Consideration. I have not found the original caption for the drawing. Perhaps the boy playing with girls is something Victorians would find humorous, but I don’t get it. 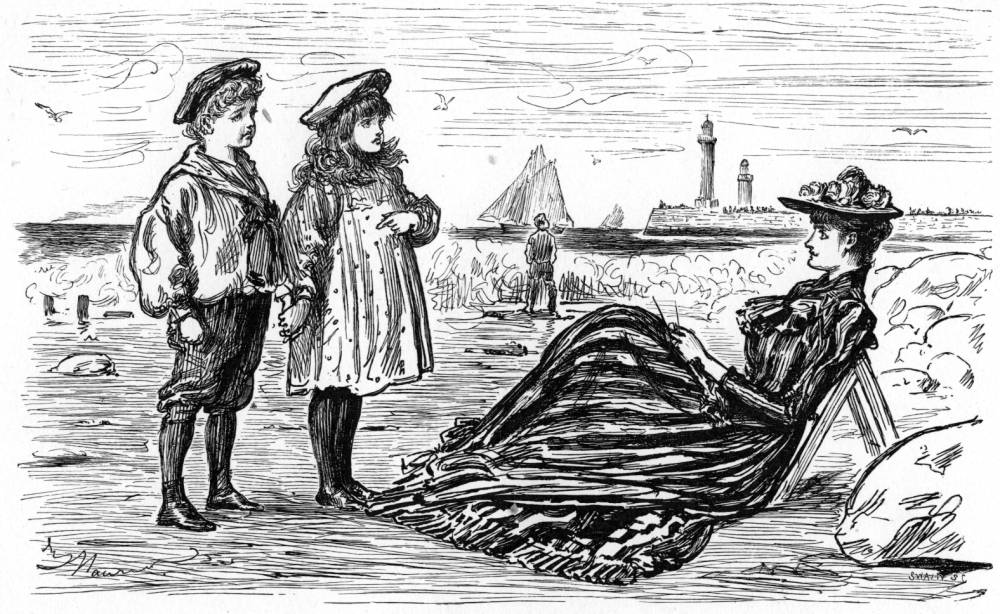 An Introduction satirizes the Victorian reserve that requires a formal introduction, or at least something significant in common in order to socialize with an unknown person. The girl is saying to her aunt, “Auntie, darling, this is my new friend, Georgie Jones. He is nice. And isn’t it funny, my birthday is the ninth of January, and his is the tenth, so you see we only just escaped being twins!” An Introduction brings to mind the poem Etiquette by W. S. Gilbert. Note the proper high society beachwear. 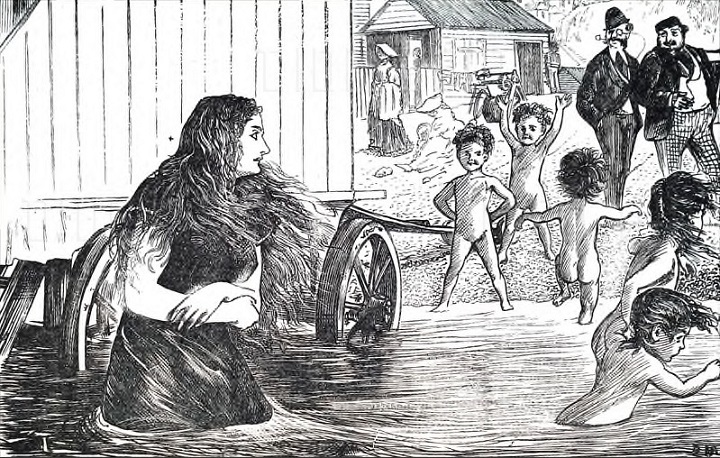 Modesty and Duty in Comfort spoofs the difference between beachwear for the upper class woman and the lower class children. At first I thought that all five children in the illustration were girls. All have long hair, and none have male genitalia. On second thought, probably only the two children in the water with very long hair are girls, and the ones with moderately long hair are boys, drawn with some censorship. At any rate, the upper class woman in the voluminous swimsuit seems to look on them with disapproval. The two nude children with long hair (I assume girls) in the right foreground appear to be moving away from the shorter-hair children (I assume boys) on shore. Many of you will have seen the PDF files of photographs at Graham Ovenden’s Garage Press site. A photo there shows a nude boy together with nude girls on the beach at Brighton in 1904. I suspect the children in that photo are from the lower social class. 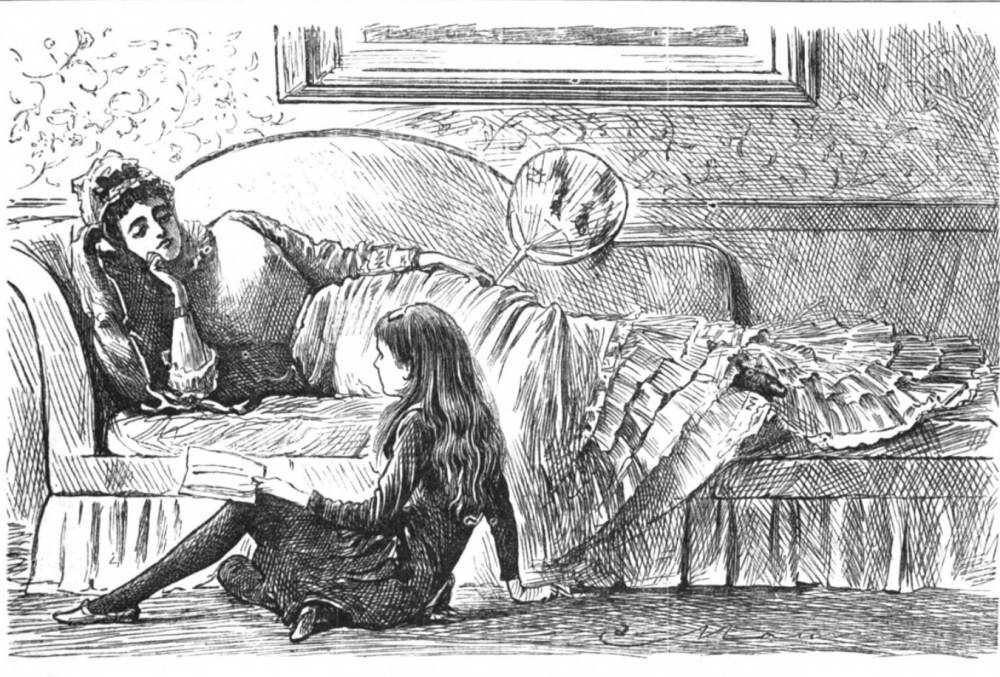 A Cry from the Heart is about a girl who doesn’t like school.
Little Dunce (looking up suddenly from her History book).— “Oh, Mummy darling, I do so wish I’d lived under James the Second”
Mamma.— “Why?”
Little Dunce.— “Because I see here that Education was very much neglected in his reign.” 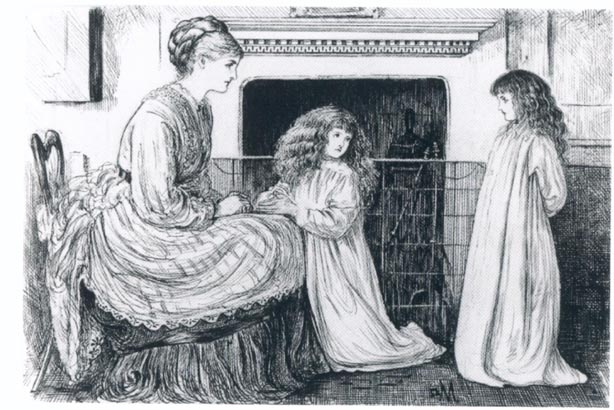 The caption for Proxy is, “Proxy — As you’re going to say your Prayers, Maud, please mention I’m so dreadfully tired I can’t say mine to-night, but I’ll be sure to remember to-morrow! ” 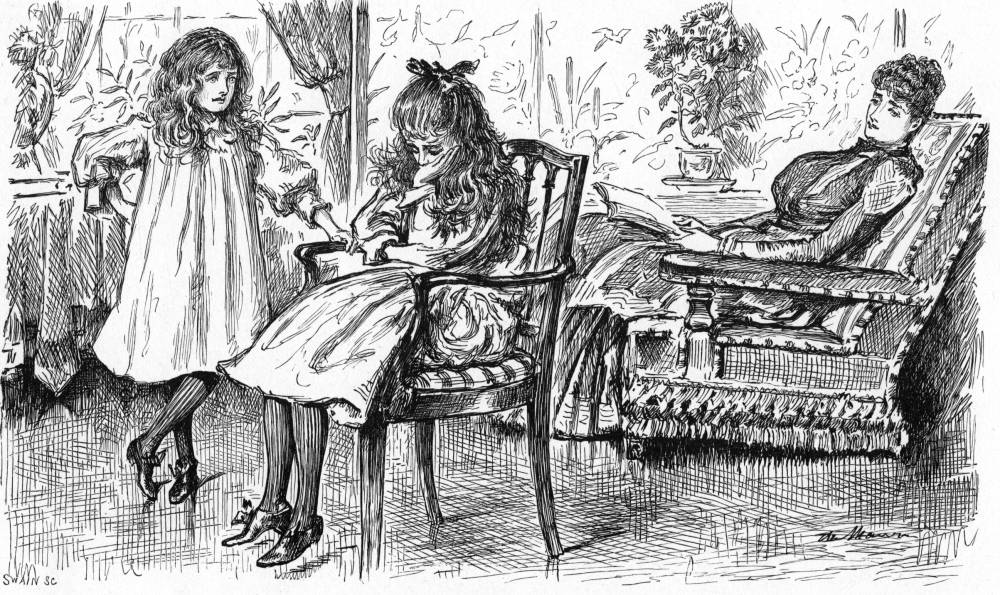 George du Maurier – I must have this tooth out! (unknown date) 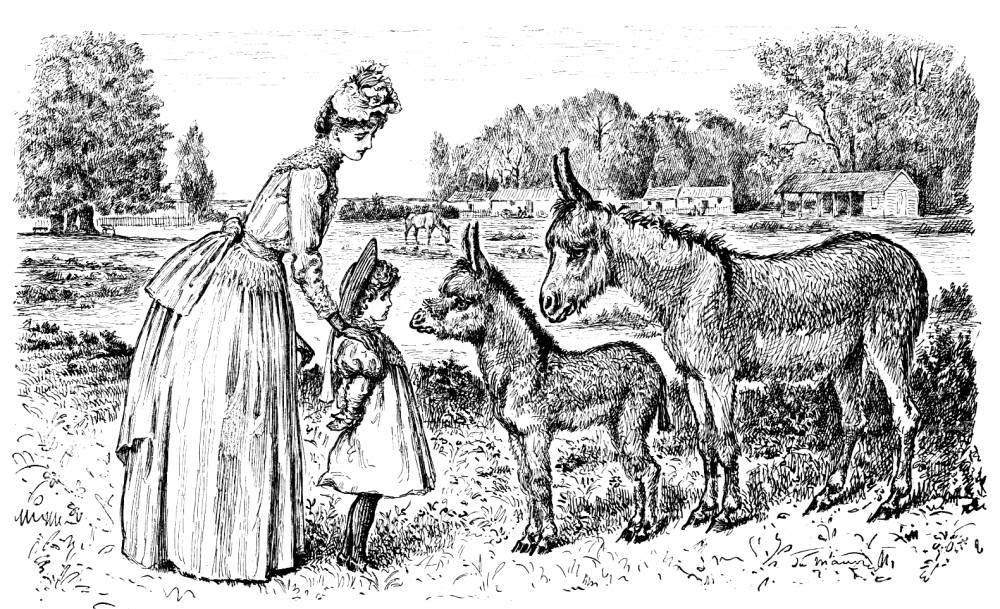 Mothers Darlings needs no caption. The point is obvious. 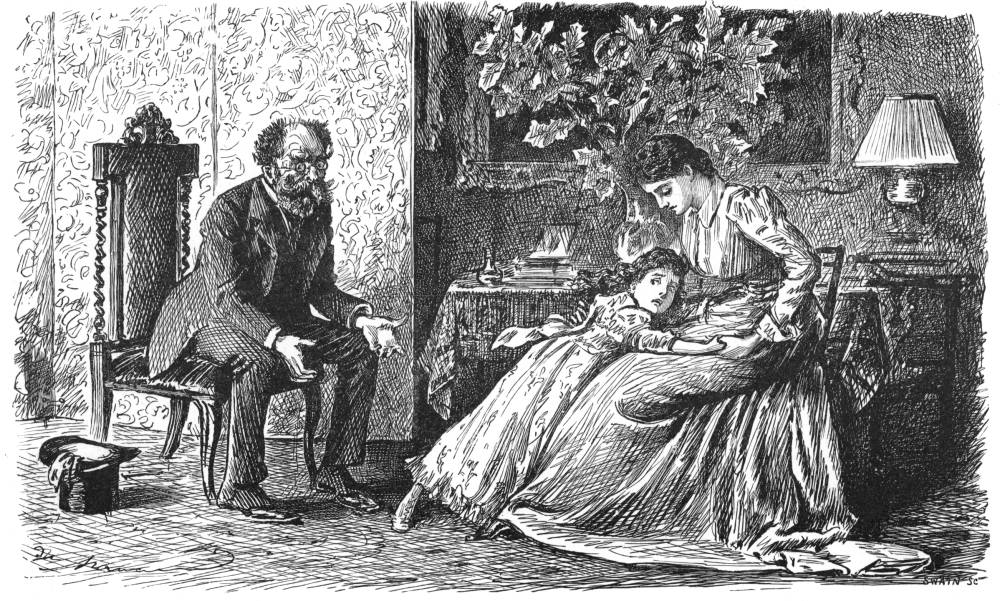