Eliseu Visconti was born in Italy in 1866. The Visconti family moved to Rio de Janeiro, Brazil before Eliseu was ten years old. Visconti studied at the São Paulo School of Arts and Crafts and at the Brazilian Imperial Academy. In 1888 he was awarded a gold medal by the Academy. He went to Paris to study art at the French schools in 1893. Eugène Grasset, a pioneer of the Art Nouveau movement, was one of Visconti’s teachers. Eliseu Visconti introduced Art Nouveau to Brazil.

After returning to Brazil, Visconti was made a professor of painting at the Escola Nacional de Belas Artes. He was in Europe again in 1913 to 1920, and during that time he painted the foyer paintings for the Theatro Municipal do Rio de Janeiro, and shipped them back to Brazil. Young girls are the subject of many of Visconti’s art. Ten examples are included in this article. Images in this post are from The Eliseu Visconti Project site, where a more comprehensive collection of Visconti’s art, and his biography may be seen. 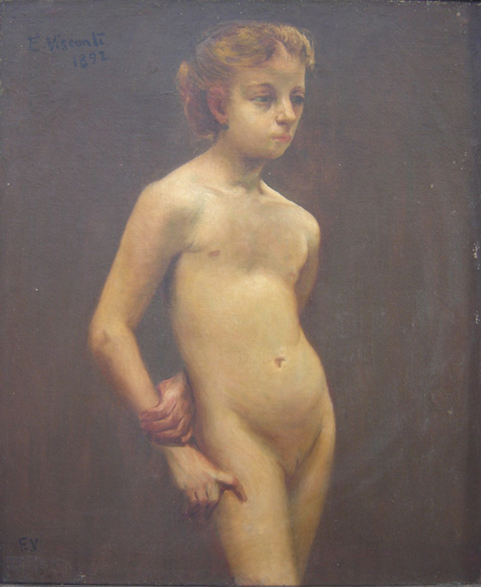 Nu de Pé (Standing Nude) was painted in 1892. It is the earliest Visconti painting in this post, and by comparing it with later paintings we can see how the artist progressed. The face is not as expressive as in later paintings; she looks as if she is bored by posing. Her left hand looks large and masculine, almost as if it is another person’s hand. 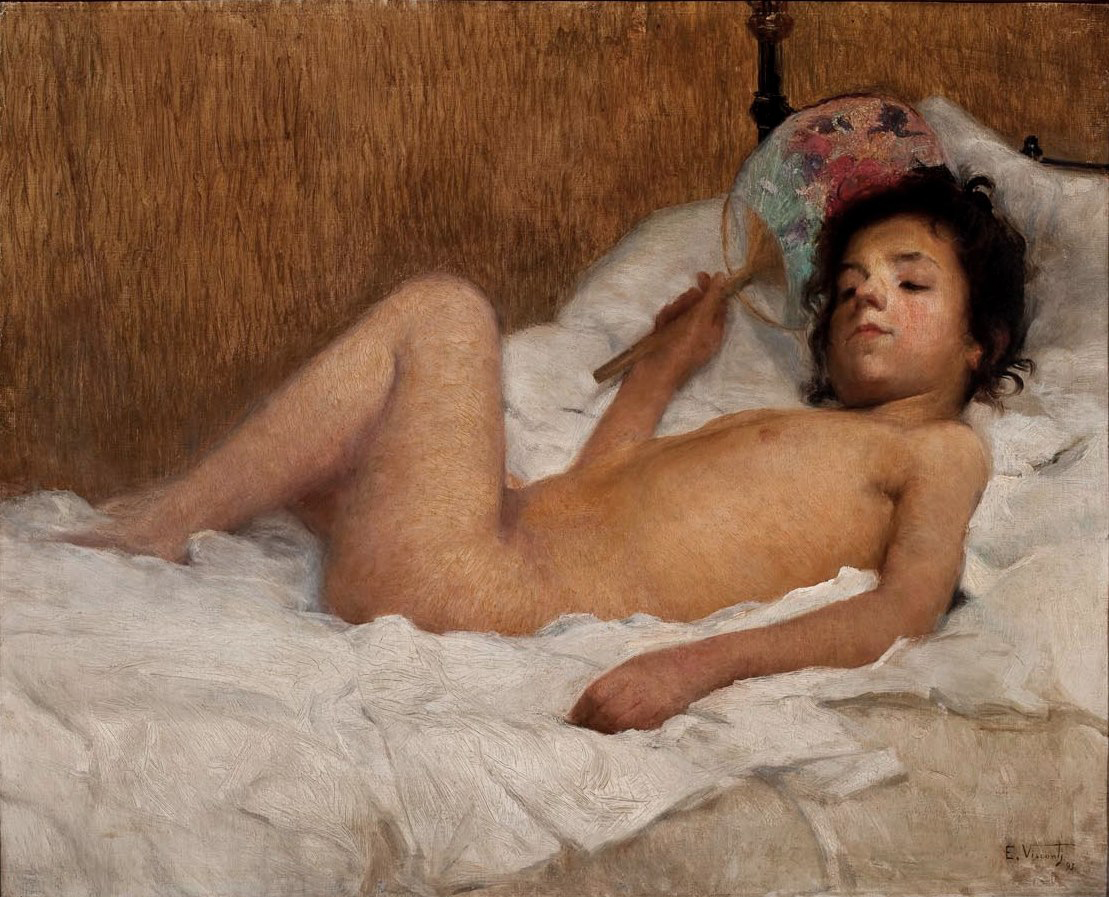 No Verão ou Menina com Ventarola (In the Summer or Girl with a Fan) was painted in 1893. Like the previous image, Visconti painted it in Paris. The girl’s expression seems more relaxed, and to me this painting seems more natural than Nu de Pé. 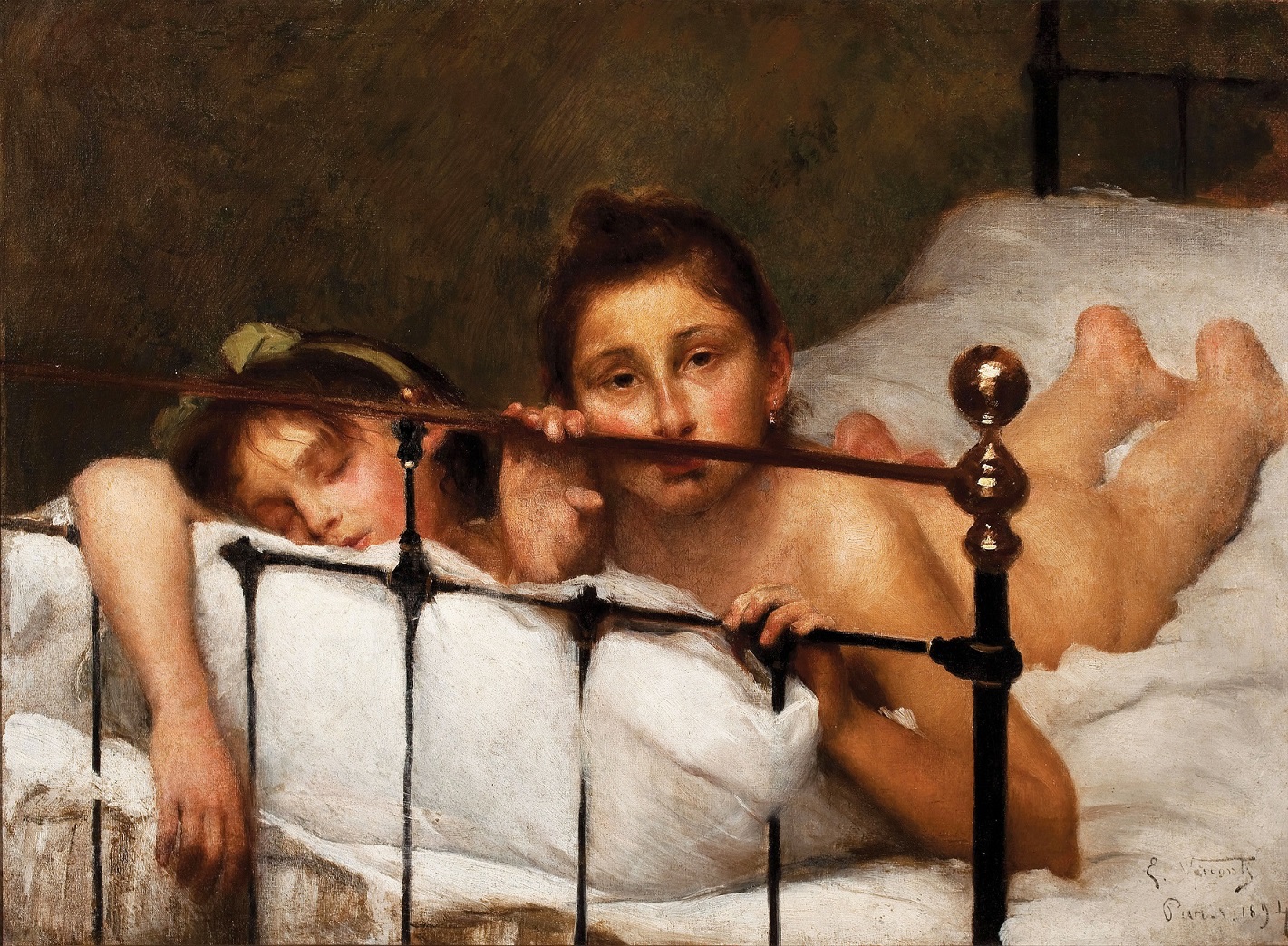 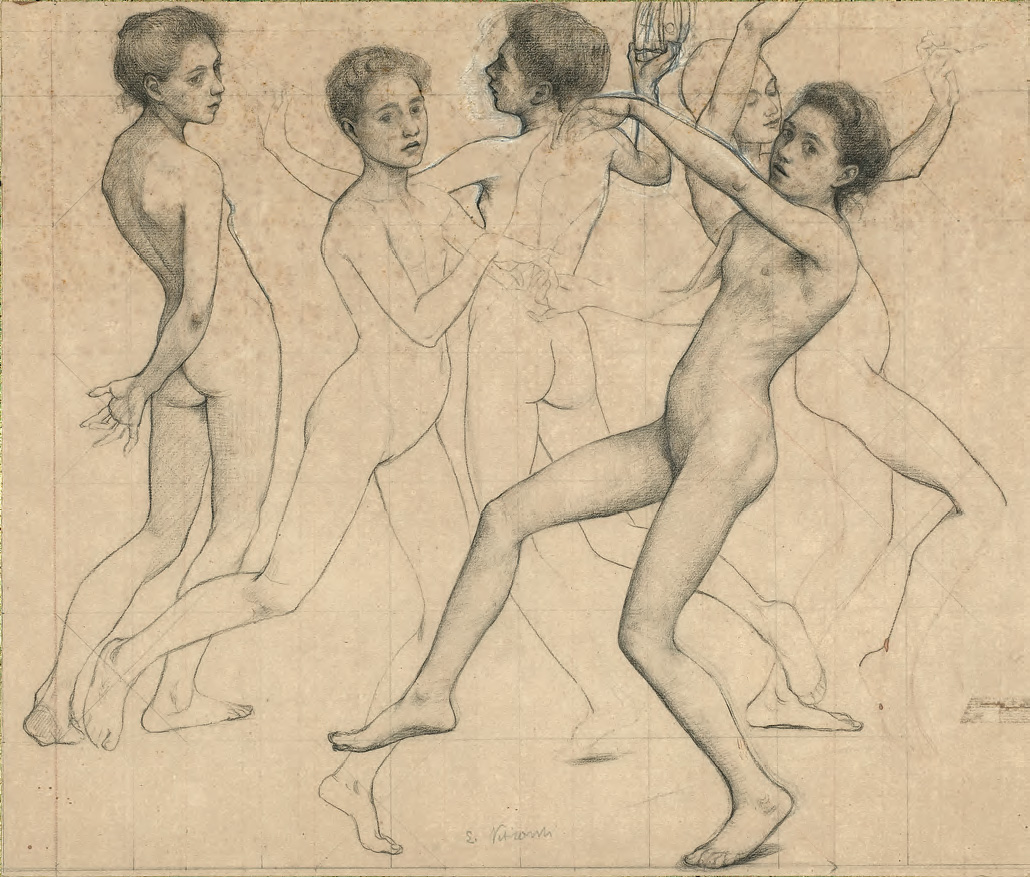 A preliminary drawing and a finished painting for Oréades (Forest Nymphs) are shown. When I first saw Oréades, I thought it was a painting of seven adolescent girls. I saw six girls in flimsy diaphanous garments that left their bodies visible, and one nude but draped with a ribbon that concealed the figure’s right breast and pubic area. According to The Eliseu Visconti Project, the nude figure with the ribbon is actually a shepherd boy dancing with six nymphs. In the preliminary drawing for Oréades, it can be seen that the effeminate appearing shepherd was modeled by an adolescent girl. 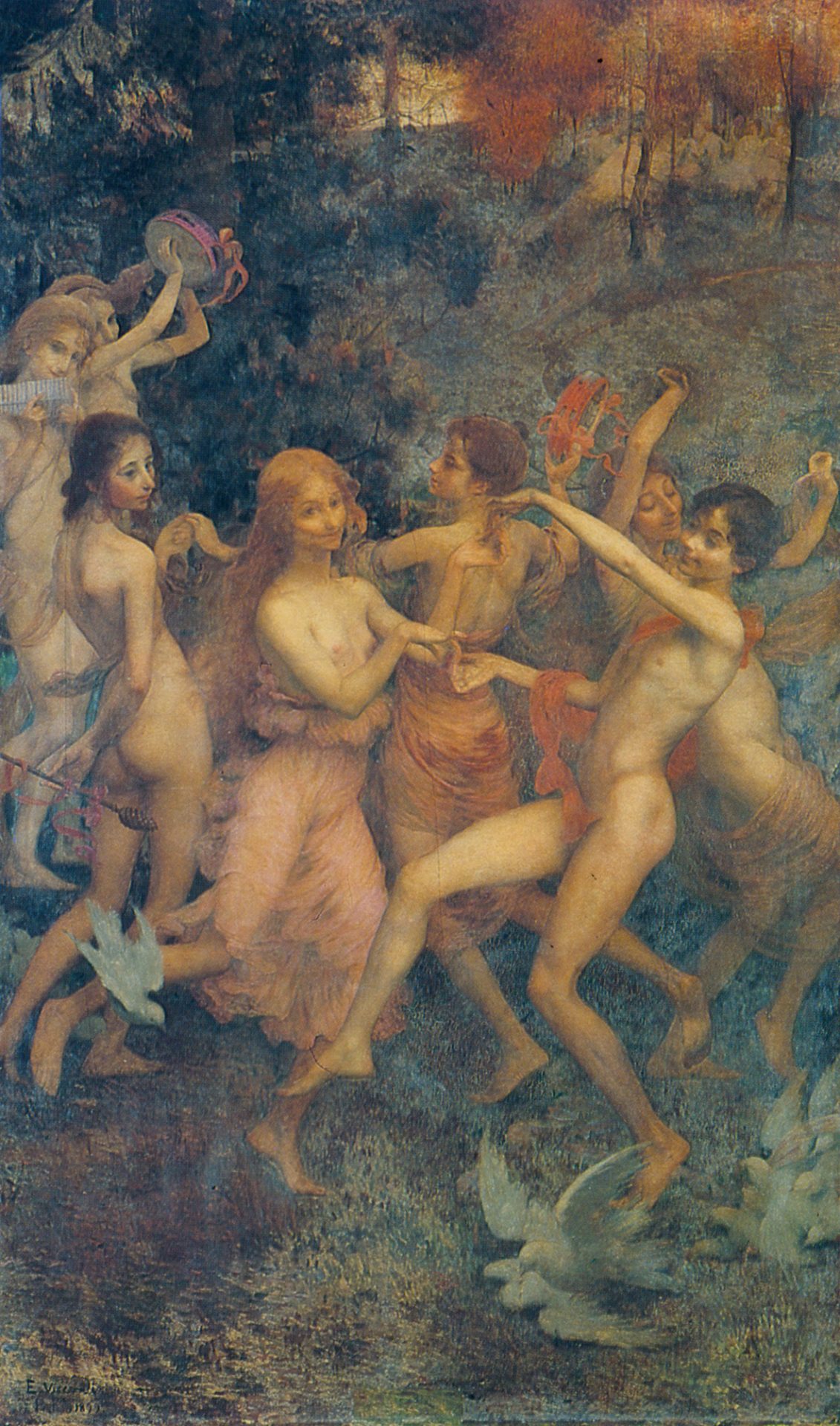 After Visconti returned to Brazil, he organized an exhibition of his work at the National School of Fine Arts in 1901. The study for the cover of the exhibition catalog is typical Art Nouveau. The four nude girls are growing from, and part of a thorny vine. It is to me a very intriguing image. I would have liked to see a full color painting of this work.

Primavera (Spring) is another painting with an expressive face. Note that the face is darker than the rest of the body. Is the model blushing because she is shy? That would fit the expression on her face. It could also be that only her face is tanned because she is normally fully dressed when she is out in the sun. As in many Visconti paintings, the main figure is shown in greater detail than the background. 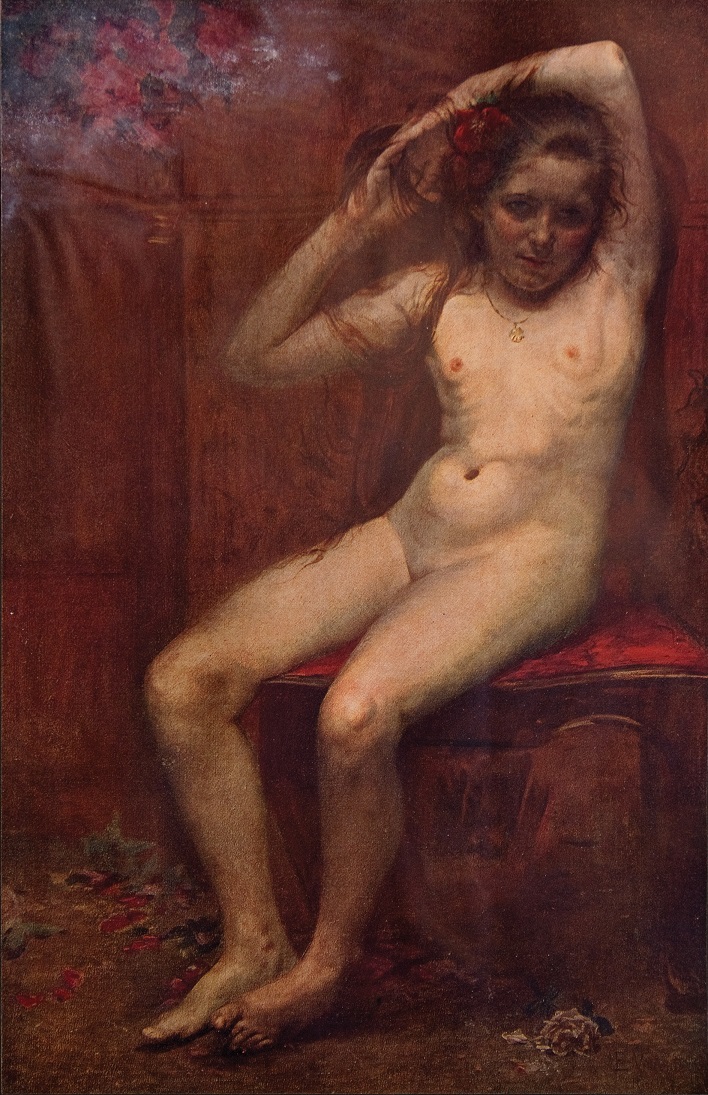 Female Figure Study and Female Figures – Study for the Arcades are both drawings for the murals that Visconti would paint for the Theatro Municipal in Rio de Janeiro. The painting based on Female Figure Study was apparently destroyed when the arcades of the concert hall were renovated in 1934. 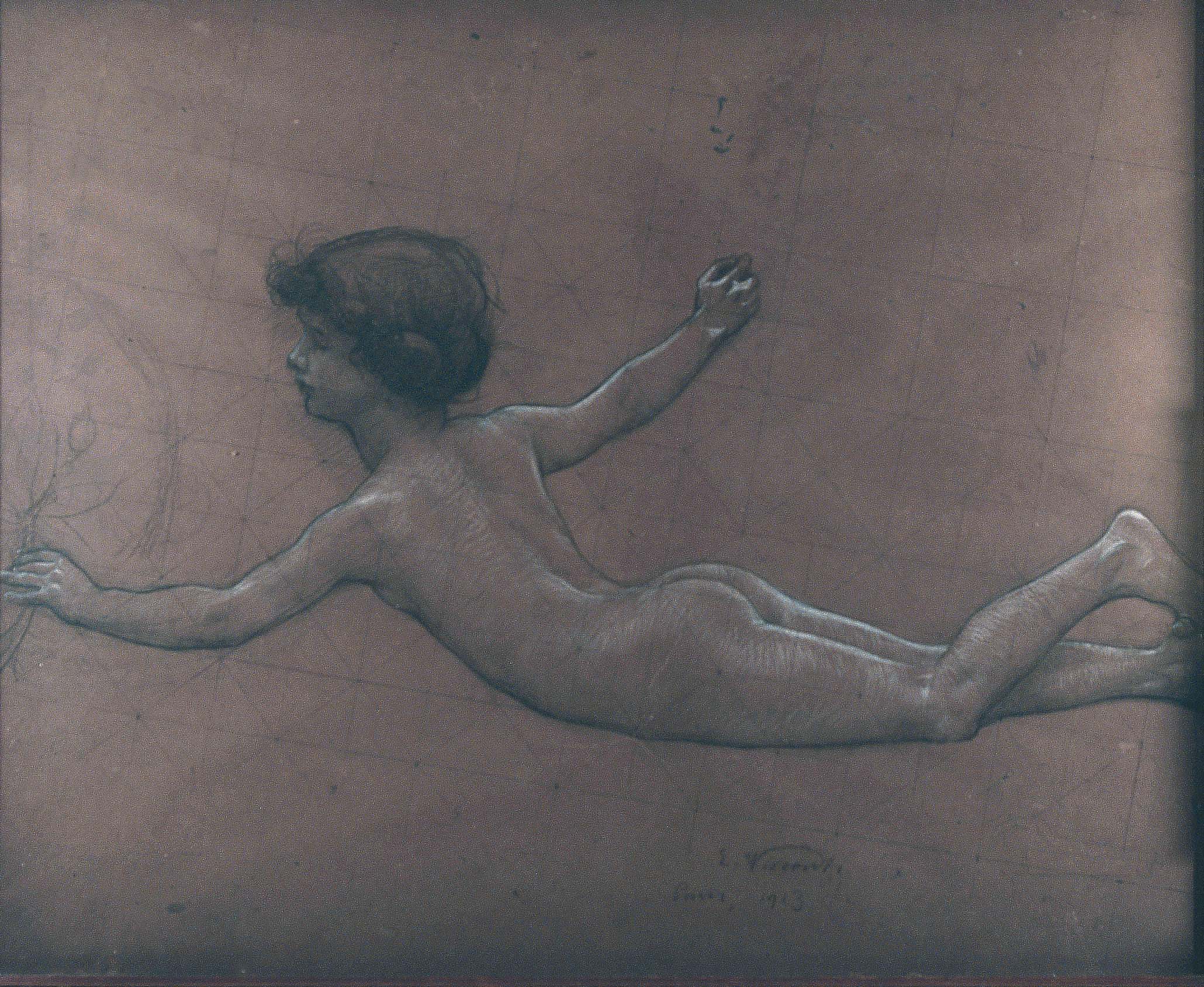 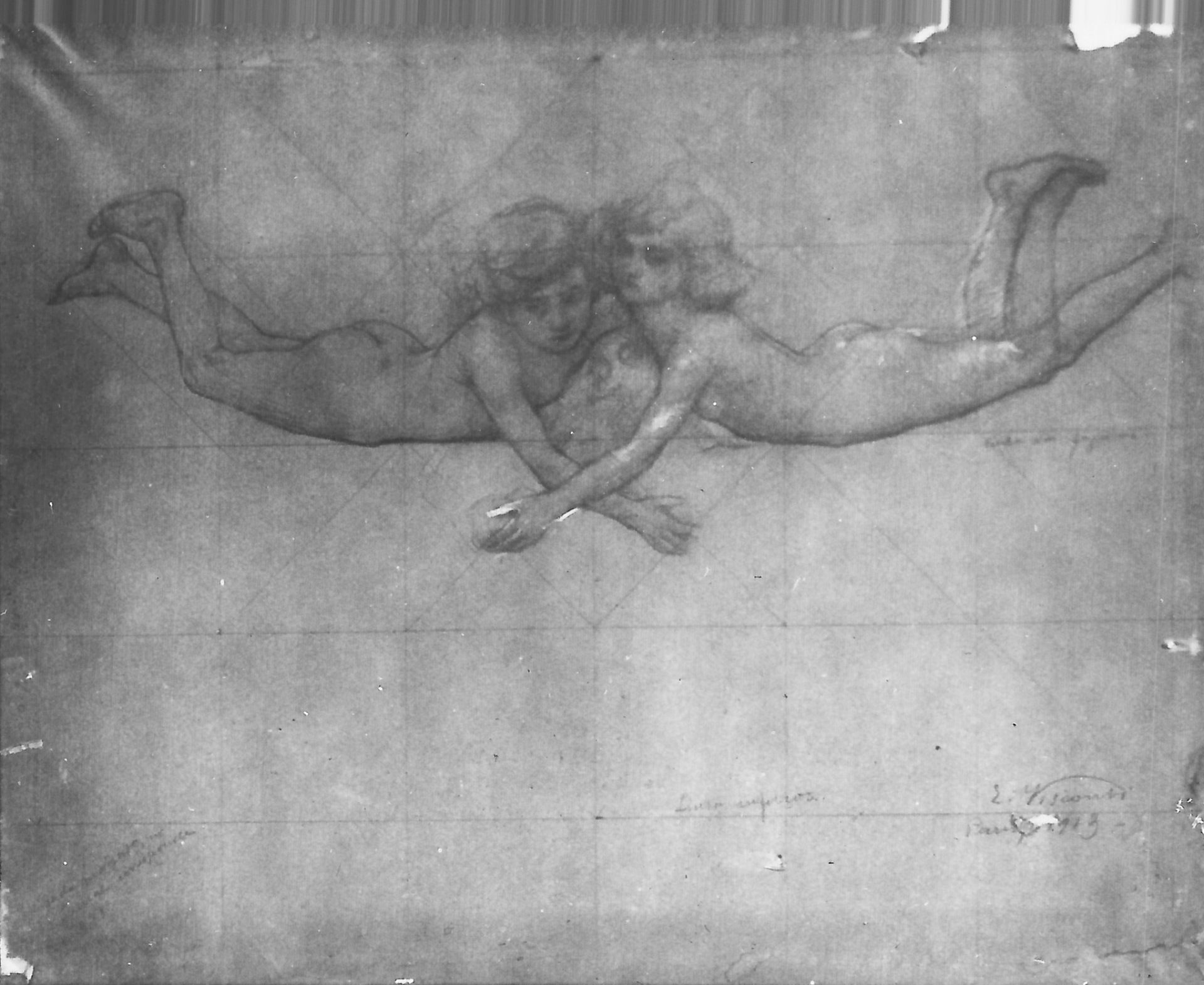 Olhar de Menina (The Girl’s Look) is the only clothed portrait of a girl included in this article, but Visconti painted many such portraits of girls over his career. Olhar de Menina is one of Visconti’s later paintings. It was painted about 1935, and Visconti died in 1944. 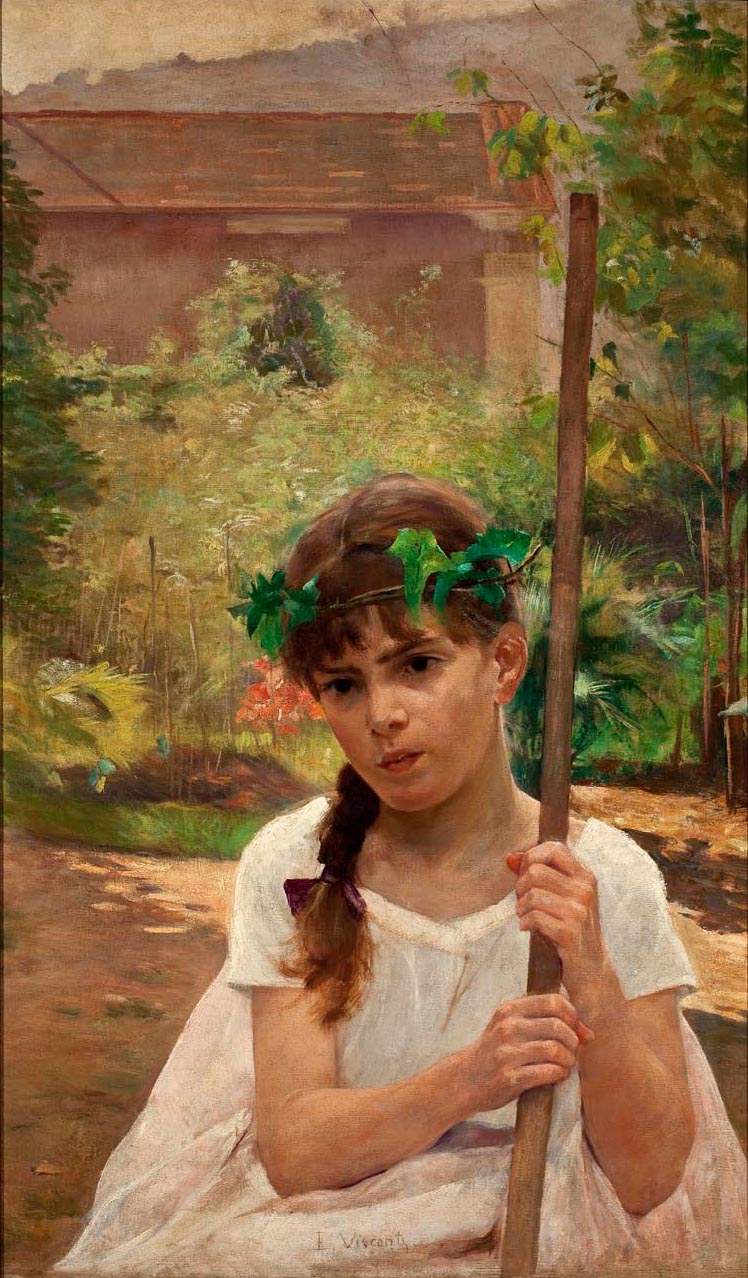