Nancy Coonsman was born in St. Louis, Missouri in 1887. She studied art at the St. Louis School of Fine Arts, the Pennsylvania Academy of the Fine Arts, and finally as a student of Abastenia St. Leger Eberle in New York. When she married Emanual Hahn in 1918, she was one of the most celebrated sculptors in America. Her most prestigious works are the World War I memorials in Cheppy-Varennes-en-Argonne, France (1922) and Veterans Park in Memphis, Tennessee (1926).

Earlier in her career she created some beautiful but less famous works, including a couple of fountains. She designed a fountain with cherubs for the Mullanphy Floral Shop in St. Louis, and another for Randolph Laughlin’s new home, “Lachlin,” (built 1907–1912). A little girl from St. Louis was the model for Randolph Laughlin’s fountain. I have not been able to find an image of either of these fountains.

Nancy Coonsman Hahn’s best-known fountain is the Margaret R. Kincaid Fountain in St. Louis, Missouri, dedicated in 1915. Margaret R. Kincaid made a bequest to the City of St. Louis to build a fountain in a public park in the city. Mrs. Kincaid stipulated that the artist designing the fountain must be a woman. A competition was held, and Nancy Coonsman won. Ms. Coonsman proposed the design shown in the first illustration. The two girls would have been surrounded by frogs, and water would have been sprayed from the frogs onto the girls. Wikipedia gives the date of Frogs and Girls as 1897. Apparently this date is given because the picture is from International Studio Magazine, which says on the cover that it was entered as second class matter with the post office in 1897. Nancy Coonsman was ten years old in 1897; the edition of International Studio Magazine with the photo is from about 1919. 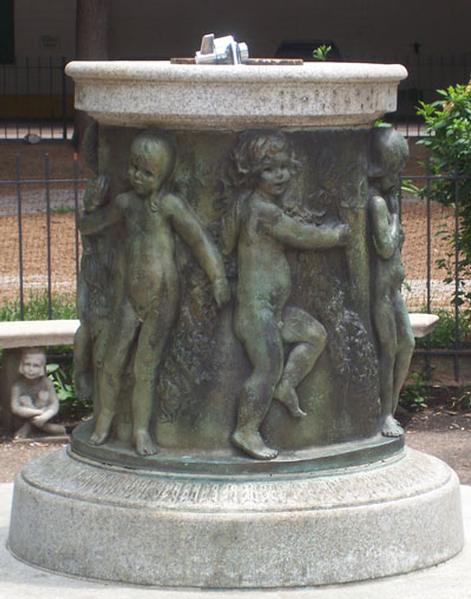 Surprisingly, the proposed design resulted in considerable outrage. The Women’s Protective League and the local newspaper protested. The Union Trust Company, custodian of the bequest, rejected the design. The nudity was not acceptable. Coonsman was irritated at having to make a new design for the fountain. I would have thought that after the uproar over her original design, the new fountain would be designed without nudity. Coonsman felt otherwise, and submitted the design shown in the second photo, with naked children dancing around the fountain. Perhaps because the children were younger, perhaps because they were in bas-relief, or maybe for another reason, the second design was approved.

The city and the Union Trust Company should have expected nudity; why were they shocked by the first design? I don’t know if there were any nude figures in the other two Coonsman fountains in the St. Louis area, but one featured cherubs, who are conventionally portrayed nude. Other great sculptors of the time were creating fountains with nude young girls, including Water Lily (c1913) by Bessie Potter Vonnoh, Seaweed Fountain (1914) by Janet Scudder, and At Water’s Edge (1914) by Edward Berge. It seems that people sponsoring a competition for sculptors should be familiar with what sculptors are doing.

What if these people with the task of approving the design were not familiar with the world of art? This contest happened in 1915, the year of the Panama-Pacific International Exposition, which made nude sculptures familiar to everyone who read the newspaper. Many of the Panama-Pacific statues (three-fifths according to the Richmond [Virginia] Times-Dispatch) were modeled by America’s first supermodel, Audrey Munson. In addition to being an artist’s model in real life, she played the part of an sculptor’s model in the movie Inspiration, which was one of two movies with nudity released in 1915. No copy of the movie is known to exist today, but we know from reviews that there were explicit nude scenes in Inspiration. Local news around the nation reported the controversy about whether the movie should be shown in their city, and which if any scenes should be cut. Even somebody who followed only the local news in 1915 should have been well aware that sculptors used nude models. My reason for mentioning these things is to show that everybody should have expected nudity in the fountain design in 1915. If they didn’t want it, they should have told Nancy Coonsman up front instead of making her redesign it.

Note the concrete bench in the background of the approved fountain, The bench, with the little elves sitting beneath it, was also designed by Coonsman.