The Naga Hills of northeastern India and adjacent parts of Myanmar (Burma) are the home of several ethnic groups that collectively call themselves Naga. Pigtails has published several articles on ethnographic photos and ethnographic contrivances, and such photos are fairly common from the Americas, Africa, Australia, and the Pacific. Not as many are found from east Asia, perhaps because girls in that region are usually clothed as completely as girls in the Western world. Naga girls were an exception. Several ethnologists have published works on the Naga people. At least two of them, Christoph von Fürer-Haimendorf and John Henry Hutton, have photographed quite a few posed portraits of girls.

John Henry Hutton documented the lives of the Naga in the 1913 to 1928 period. Neither he nor von Fürer-Haimendorf were artists in the strictest sense, but both seemed to try to pose models for an aesthetically pleasing photograph. Judged by their artistic merit, I believe that Hutton’s photos are at least equal and probably superior to von Fürer-Haimendorf’s. Unfortunately, the Hutton photographs available at the University of Cambridge Digital Himalaya project are low quality. 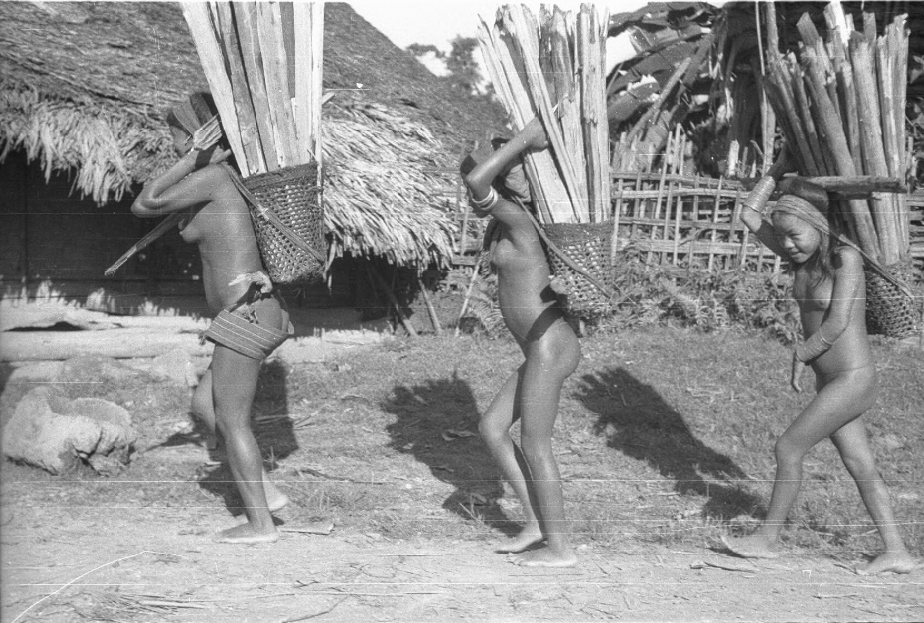 Two Girls Standing in front of a House is the first photo in this article. Note that the most necessary adornment for the prepubescent girl consists of necklaces and earrings. Postpubescent females, like the one on the left, almost always wear at least a skirt in Naga photos I have seen. Von Fürer-Haimendorf posed his models well; I like the contrast between the folded arms of the woman and the elbows out posture of the girl. I think it would have been better if he had not cropped the photo at the ankles; it makes it look like their feet were cut off.

Two Small Girls on a Platform also has a problem with cropping. The girl on the left has the top of her head cut off. Other than that, it is a very nice picture. I like the expression of the girl on the left; it looks like she is trying not to laugh. There are some small black dots on the right side of this photo as it appears at University of London SOAS. Although both girls are quite young, one is fully clothed. The photos I have seen indicate that as a general rule children go naked and adults are clothed, but there are exceptions to that rule.

Procession of Girls Carrying Wood is, in my opinion, a well composed picture. If a painter were to copy one of the photos in this article, Procession of Girls Carrying Wood might be his best choice. They are carrying a lot of wood, but do not appear to be overburdened. The girl on the left wears a very small skirt. These minimal skirts are common in photos of young women and teenage girls.

Naga people usually have straight hair. When von Fürer-Haimendorf found an individual with curly hair, he found it to be noteworthy. He found three curly-haired Nagas, two men and one girl, whom he photographed. Photos of the men are both head and shoulders portraits, while the picture of the girl is full length. Both girls in Two Girls, One with Curly Hair are at the age when girls are most often depicted wearing skirts, but only one has a skirt in this photo. It’s a good image, even though the subjects are poorly centered.

Young girl with Necklace is a simple yet pleasing photo. It is well-centered and well-cropped. However, the image is appealing more for the beauty of the model than the skill of the photographer.

The next photo is the only image by von Fürer-Haimendorf that is untitled, and the only one of his in this article that is from University of Cambridge Digital Himalaya project. Like the previous photo, it is well-centered and well-cropped. I find the pensive attitude of the model intriguing.

The next photo, by J. H. Hutton, is also from University of Cambridge Digital Himalaya project. The style is much like von Fürer-Haimendorf’s, even the cropping off of the girls’ feet.

Row of Girls Dancing in Festive Attire on a Platform is another example of von Fürer-Haimendorf’s method of centering his subject. There is plenty of empty space on the left, but the dancer on the right is only half visible in the image. The dancers wear “festive attire”, and are therefore more dressed than most other girls in these images. The robes of the girls on the right are open, and it appears that their fancy dress is for ornamentation rather than concealment.

The last four photos are of younger girls. That last is one of von Fürer-Haimendorf’s few color photographs. Note that the middle girl in Three Little Girls wears only earrings. Maybe she is not as rich as the other girls who have necklaces, or maybe it is just because she is younger. Little Naga girls have short hair, while the older girls wear their hair longer. 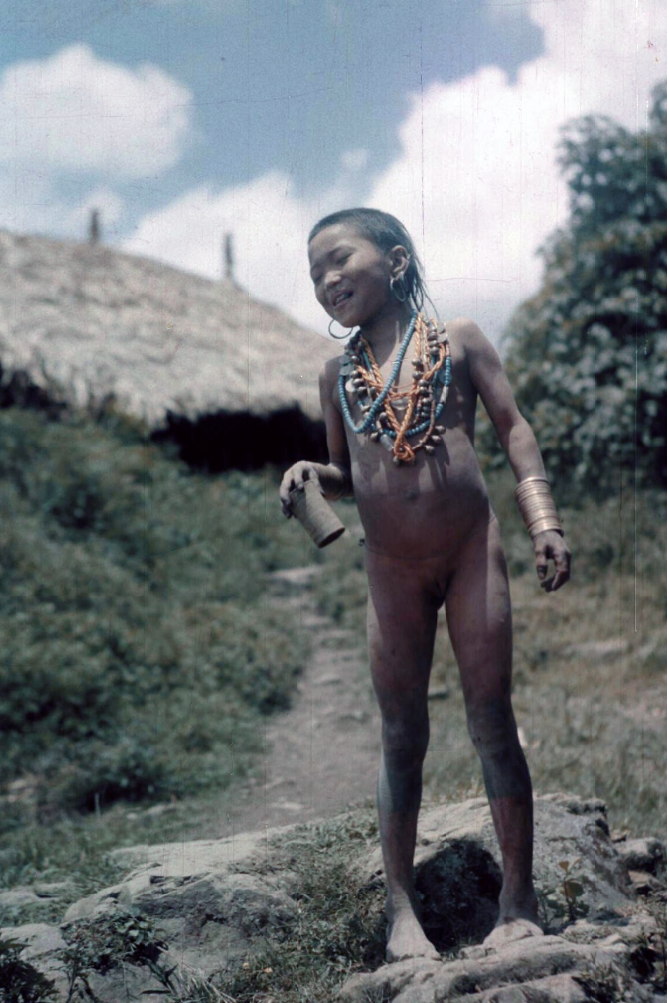 4 thoughts on “Girls of the Naga Hills”