Slavica Janešlieva was born in 1973 in Skopje, which was then in the Yugoslav Republic of Macedonia, one of six republics that were united in Yugoslavia. Skopje is now in the independent Republic of North Macedonia. In 1998 Janešlieva earned a master’s degree from the Faculty of Fine Arts in Skopje. In 2011 she became a professor in the Faculty of Fine Arts, at the University of St. Cyril and Methodius. Her art has been displayed in exhibitions and museums around the world.

Slavica Janešlieva spent her childhood in a relatively stable, though authoritarian country. The government of Yugoslavia tried to encourage the people to accept diversity. Even though the Yugoslav ethnicities had traditionally been enemies, it was hoped they could learn to live and work together in harmony. During the Cold War, Yugoslavia was not aligned with either NATO or the Warsaw Pact. As a result, both the United States and the Soviet Union sought the friendship of Yugoslavia. In the 1990s, the dream of different peoples living together in a peaceful stable country came to an end. 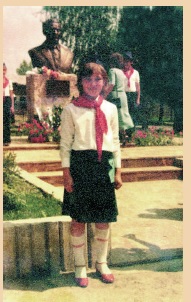 Anonymous – Slavica Janešlieva as a Child – (circa1983)

I believe that to understand Cut-Out Paper Pioneer Doll Kit it is necessary to know some of this background information about the artist’s country. Yugoslav Macedonia was part of Yugoslavia until 1991. From 1991 through 2019 Skopje was in the Republic of Macedonia. Greece objected to the name, because a region in Greece is also called Macedonia. The name was changed in 2019 to the Republic of North Macedonia. The country could accurately be called West Bulgaria, because the ethnic Macedonians are Bulgarian. They may not have wanted to name their country West Bulgaria out of concern that Bulgaria would object or try to annex the country (which they did during World War II). Albanians are the second largest ethnic group in North Macedonia; there is antagonism between ethnic Macedonians and ethnic Albanians.

Perhaps Janešlieva has some nostalgia for the old Yugoslavia. Note the Pioneer Pledge to “love and cherish our homeland ‘my MBC’ and all its nationalities and ethnic groups.” Note also that the map of the Make Believe Country is a map of the former Yugoslavia. The doll’s nudity implies a vulnerability. A real paper doll has clothing that can be cut out to fit on the doll. In this work, the blouse, pantyhose, and shoes could not fit the doll.

Cut-Out Paper Pioneer Doll Kit was exhibited at the Bitola Museum in Bitola, North Macedonia in 2015. It was part of the “In-First-Person” exhibit for self portraits of contemporary Macedonian artists. I don’t know if the girl is really from a childhood photo of Slavica Janešlieva. Here in the USA most people don’t have nude photos of themselves as children. It may be different in North Macedonia.