When I was looking for artwork for the Polynesian post, I found relatively few examples of girl art from the largest Polynesian islands, New Zealand. It was only recently I became aware of the work of Gottfried Lindauer. 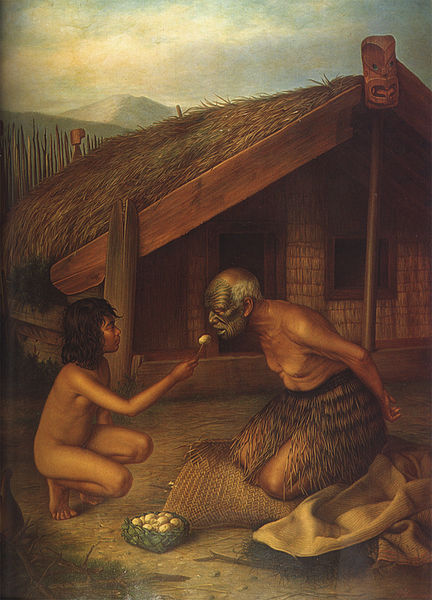 Gottfried Lindauer – Tohunga under Tapu (circa1900)

Lindauer was born in Plzeň (Pilsen), in what is now the Czech Republic. He studied art at the Academy of Fine Arts in Vienna, and became a successful professional artist. In 1874 he emigrated to New Zealand to avoid the military draft. Lindauer came to admire the Maori culture; he specialized in painting the Maori. His life-size portraits of Maori chiefs are perhaps his best known works.

Tohunga under Tapu illustrates an incident described in the book Māori Biographies: Sketches of Old New Zealand by James Cowan and Gottfried Lindauer (1901). A tohunga is a Maori medicine man. The Maori considered the remains of the dead to be “tapu”, that is sacred and forbidden. When the tohunga, in the course of his religious duties, came in contact with the remains, he also became tapu for a time. While under the tapu, he could not touch food with his hands.

The tohunga had to eat as shown in the painting. Māori Biographies states that, “A little girl, quite naked, so that her garments may not be infected with the dangerous tapu, has brought the old man his food, a plaited flax kono or basket full of potatoes, and is half-fearfully feeding him with the boiled taewa stuck on the end of a long fern-stalk.”