This illustration by Chevalier Fortunino Matania is the artist’s conception of the abduction of Helen as a child by Theseus. 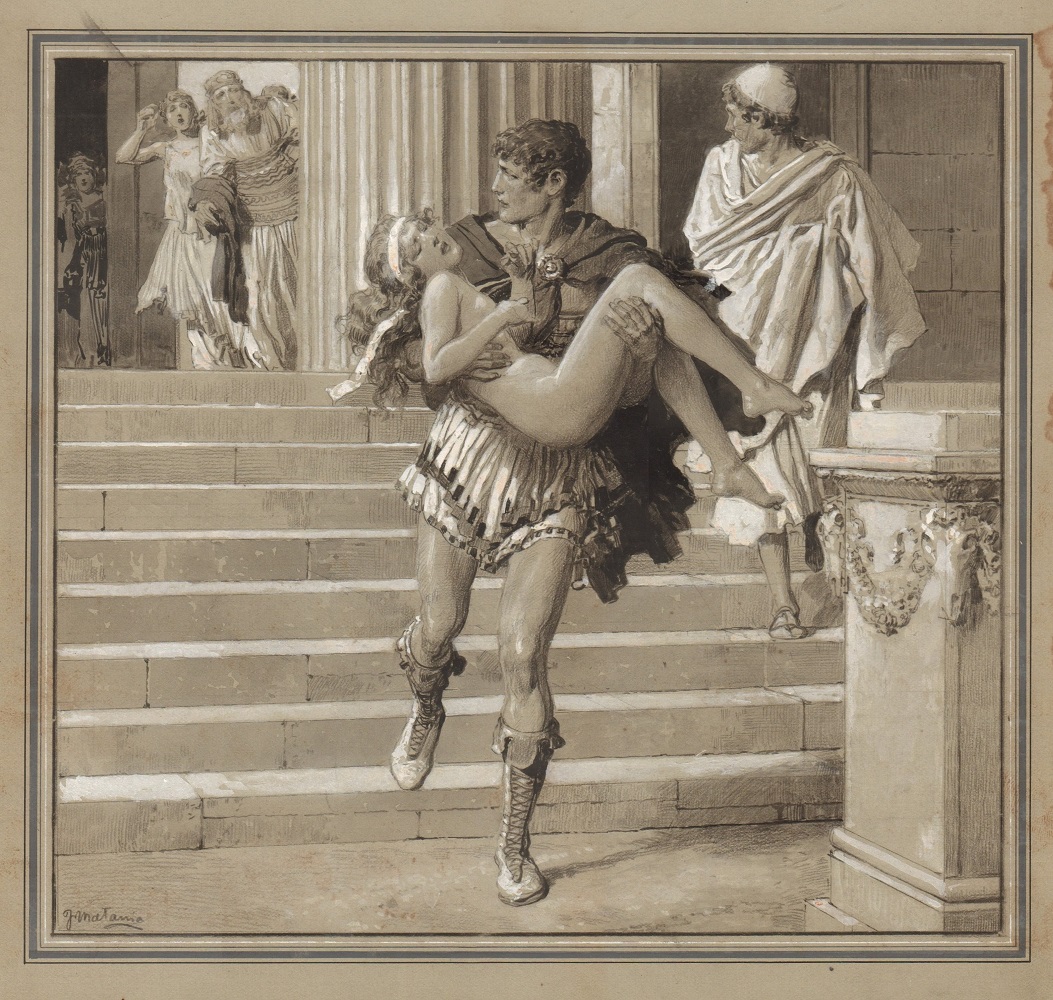 Fortunato Matania – The Abduction of Helen by Theseus (1929)

Fortunino Matania was born in 1881 in Naples, Italy. He began working at his father’s art studio when he was nine years old. By the time he was 14, he was a professional illustrator for a magazine. His work was featured in British, French, and Italian magazines of the early to mid-20th century. During World War I he was noted for his realistic illustrations of war at a time when many artists attempted to glamorize the subject.

According to Greek legend, Helen was the most beautiful female who ever lived. She was the daughter of the Greek God Zeus and a mortal woman, Leda. The great hero Theseus, famed slayer of the Minotaur, was promised that he could have a daughter of Zeus as a wife. Theseus chose Helen, and kidnapped her. He intended to keep her until she was old enough to marry, but Helen was rescued before then. Hellanicus, writing in the 5th century BC, claimed that Helen was seven years old when abducted. Diodorus Siculus, of the first century BC, wrote that Helen was ten years old. Ten years after the abduction by Theseus, Helen was kidnapped (or eloped) again and taken to Troy. This incident started the Trojan War, and Helen became known as Helen of Troy.

Stories of Helen, Theseus and other Bronze Age Greek heros were generally seen as entirely fictional before the archeological expeditions of Heinrich Schliemann in the 19th century. Schliemann was able to demonstrate that many of these stories are probably based on true events. Further archeological research has provided more evidence, and in August 2021, according to an article in GreekReporter, the remains of the Trojan Horse were excavated. The abduction of Helen by Theseus is probably not true. Scholars think that the real Theseus lived in the 8th–9th century BC. Helen of Troy was a young adult at the time of the Trojan War in the 12th century BC, and therefore could not have been abducted by Theseus.

The story behind this illustration cannot tell us what actually happened in Bronze Age Greece, but may give us some insight into 20th century England. Matania said that he usually included female nudes in his illustrations for Brttannia and Eve because, “The public demanded it. If there was no nude, then the editor or I would get a shower of letters from readers asking politely why not.”

1 thought on “Abduction of Helen by Theseus by Fortunino Matania”