Since the earliest conversations between Pip and myself, we talked about doing a post on this photographer many times. Eadweard Muybridge (1830–1904) is such a key figure in early photography that it was frankly a bit intimidating. However, since Muybridge’s interest was in the motion of animals (including human beings), only a few examples exist of children in motion and an encyclopedic post really isn’t necessary.

It is acknowledged nowadays that photography is a great medium for documentary/journalism and fine and commercial art. But it should also be understood as a valuable scientific tool as well. Muybridge saw it as a way to investigate the world. Anyone familiar with the history of photography will have heard the following tale. One of Muybridge’s patrons was Leland Stanford who was the first governor of California. He was debating with an associate about whether all four feet of a horse leave the ground when in full gallop. Muybridge set up an experiment to test this with a series of cameras and triggers that would fire at the proper moment as a horse passed them at a gallop. Stanford lost the bet because it was definitively proven that all the feet are off the ground for at least a moment. This was a pivotal event not only in photography and scientific inquiry but in motion pictures as well. That’s because after the film the developed and if one were to flip through the images in sequence, one would see the illusion of a horse in motion. This triggered a spate of innovations involving moving pictures and the advent of a motion picture industry.

However beautiful Muybridge’s pictures may have been, you will notice reference lines and numbers in them to assist in the understanding of timing and scale of the motion he was studying. 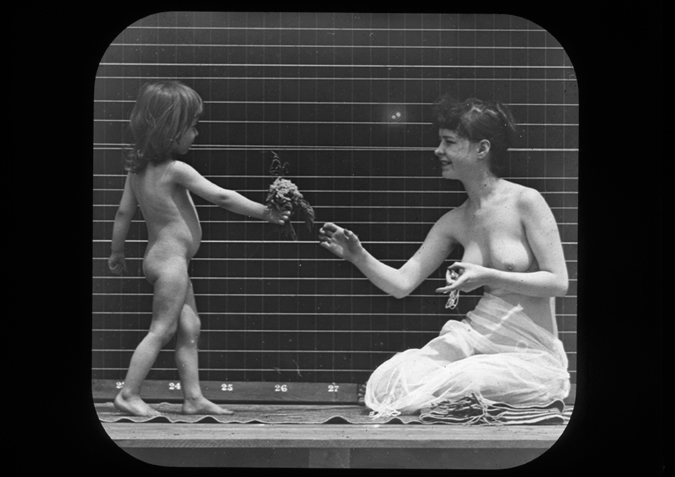 On the cover of the Time-Life book Photographing Children, there is a toddler girl (probably the same one) in a series of shots compressed together in a frame to show the progression of her movement.