One year ago, I started this series of articles on naturalist paintings of rural girls, and I pointed out that in the 19th century, peasant life was a theme of predilection for the schools of social realism and naturalism, both as a focus on the fate of poor toiling people and as an expression of interest in nature, in contrast with modern urban life.

In peasant families of that time, children participated in farm work, and it seems that herding flocks of geese was a girl’s job. Thus, many 19th century paintings represented goose girls, and indeed, my first article was devoted to The Goose Girl of Mézy by Léon Augustin Lhermitte. Moreover, this topic was the subject of the German fairy tale Die Gänsemagd, collected by the Brothers Grimm and published in Grimm’s Fairy Tales in 1815, which has been illustrated by many artists.

I will thus present here a selection of such paintings. The criteria for my choice have been the quality of the painting and of its digital reproduction, its naturalistic style (as opposed to later schools of Impressionism and Expressionism), and that it shows a young girl, not an adult woman.

I start with Jules Bastien-Lepage, the painter of Pauvre Fauvette presented in my second article. This “goose girl”, dated around 1875, belongs to the Philadelphia Museum of Art: 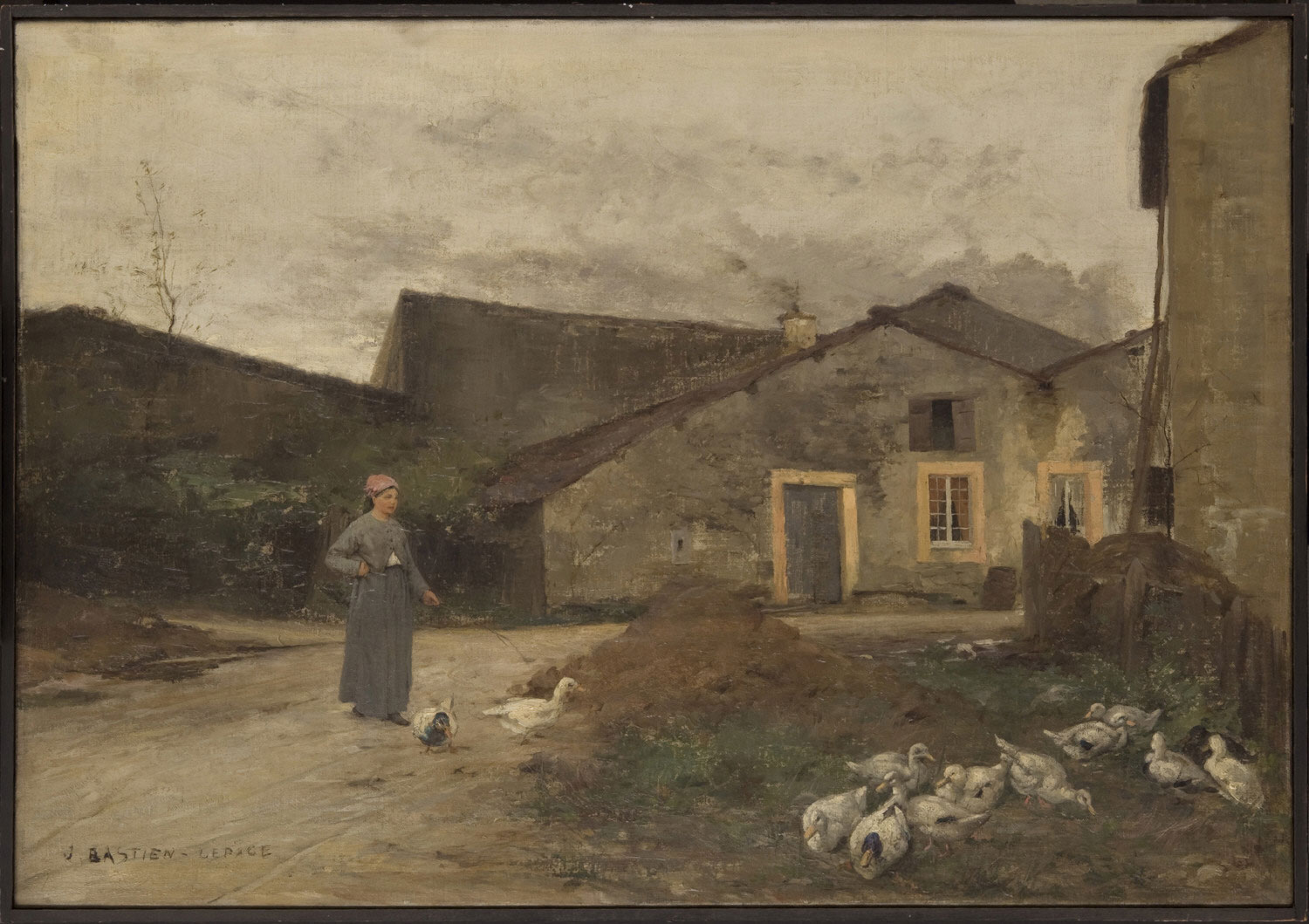 One of the most famous painters of the rural world is Jean-François Millet (1814–1875). Many people have seen his Des Glaneuses (1857), showing women gleaning in a field after harvest, and L’Angélus (1857–59), showing a peasant couple praying at the sound of a church bell. Born in the hamlet of Gruchy (now part of the village Gréville-Hague) in Normandy, he worked in the family farm until 1834, when he left to study painting in Cherbourg, then in Paris. In 1849 he moved to Barbizon, east of Paris, where he remained for the rest of his life; he is one of the founders of the famous “Barbizon school” of realist painting.

He briefly returned to his birthplace in 1856, where he painted the following work, now at the National Museum of Wales (image from Tutt’[email protected]): 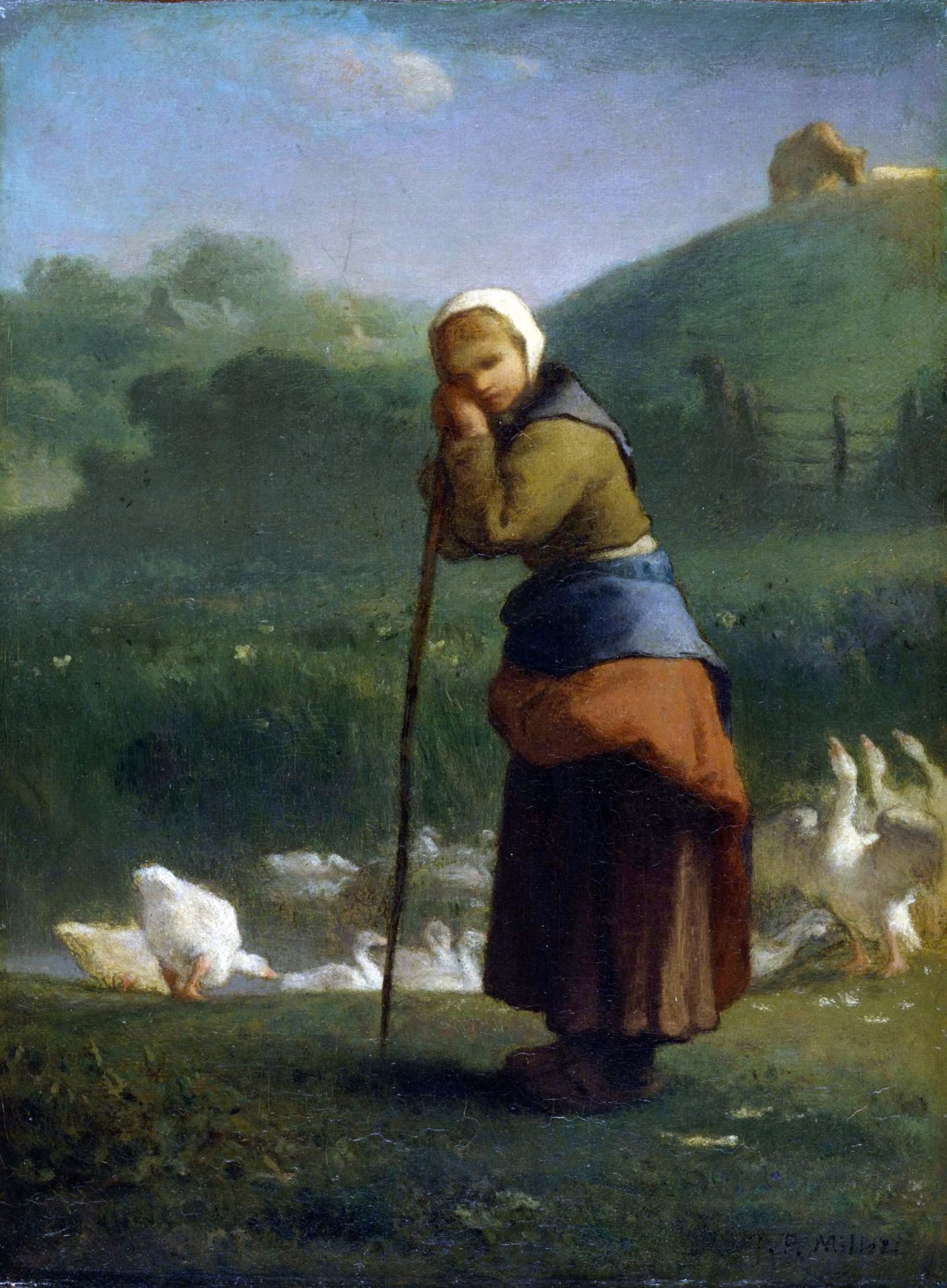 In the 1850s and 1860s, he painted several goose girls. One was exhibited at the 1867 Salon, about which he wrote to his friend Sensier: “I want to make the screams of my geese ring through the air. Ah! life, life! the life of the whole!” Here is one these paintings, dated 1866–67; previously owned by Sensier, it belongs now to the Tokyo Fuji Art Museum. 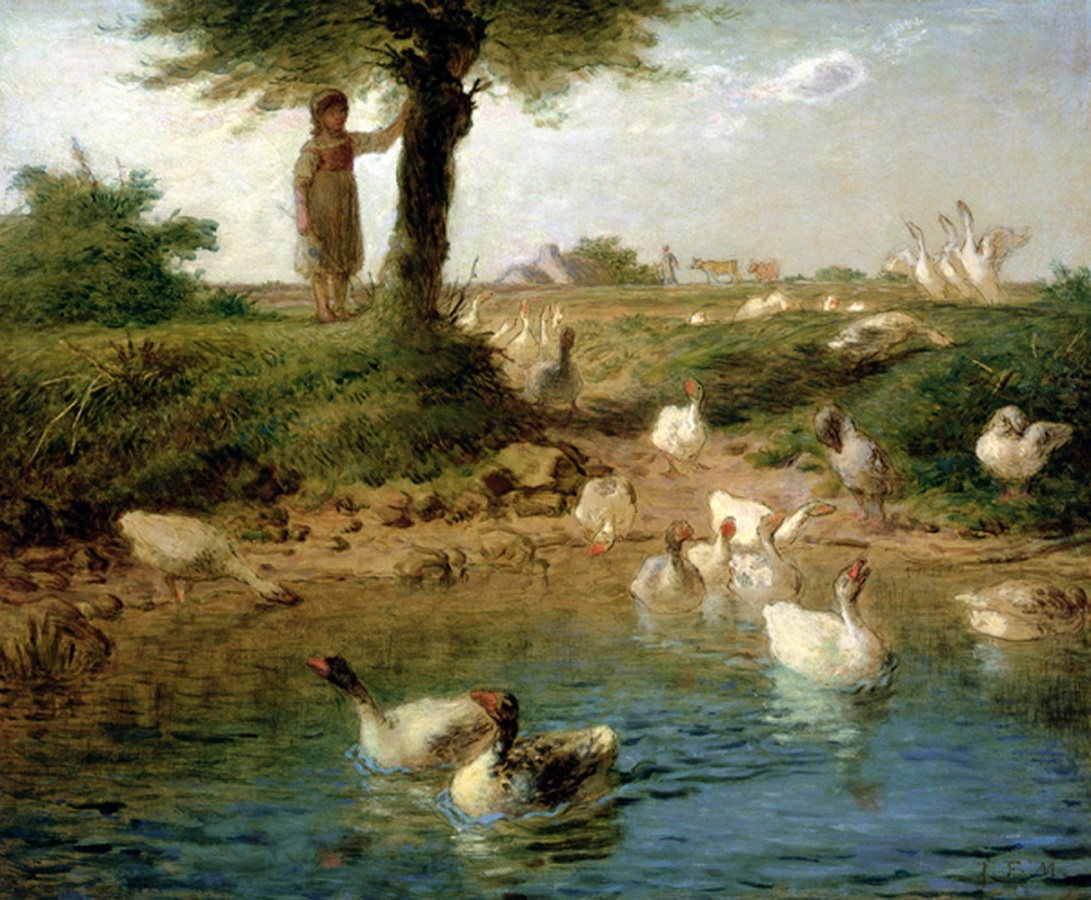 He also painted a nude “goose girl,” but this one is a woman rather than a girl.

The English painter and illustrator Alice Mary Havers (1850–1890) was popular for her genre paintings of village women and rural landscape. Here are two of her goose girls in a beautiful landscape (images from the Art Renewal Center): 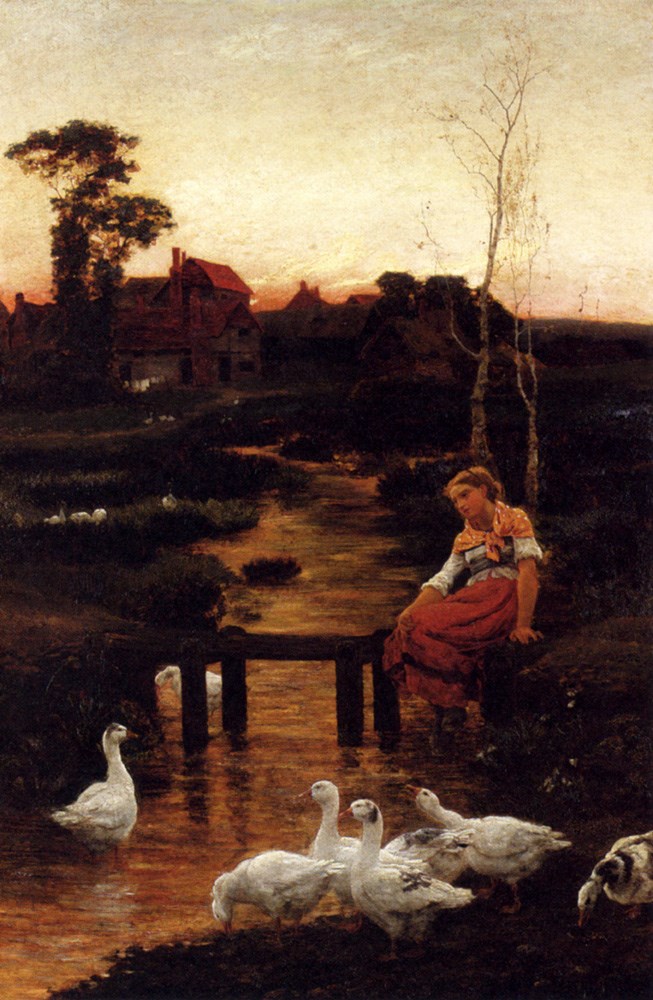 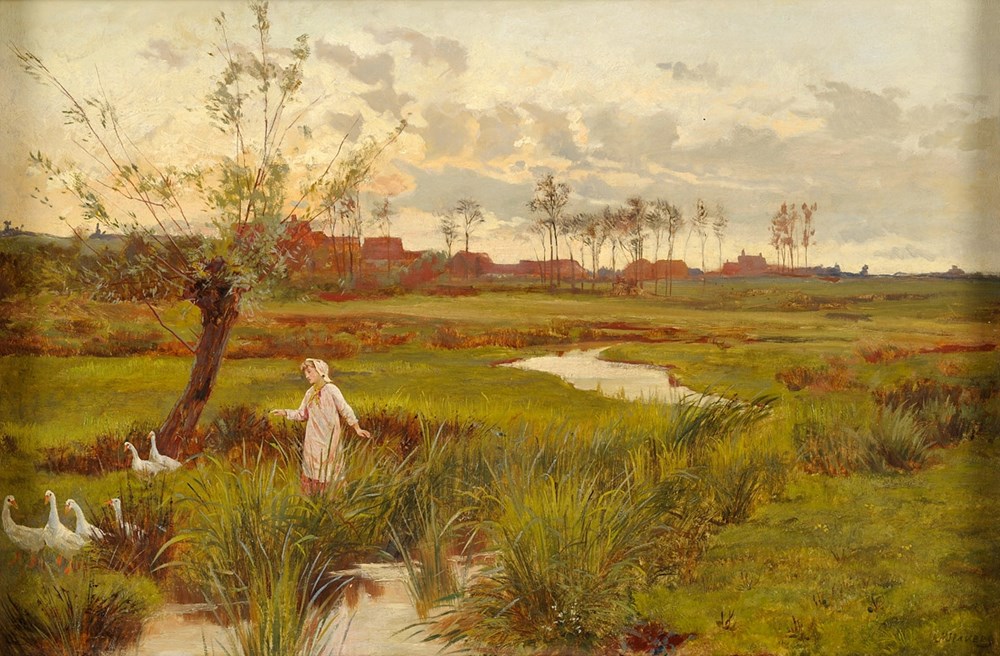 The Irish novelist Edith Somerville (1858–1949), also a suffragette and Irish nationalist, painted and sketched, illustrating picture books. Here is (from the Crawford Art Gallery) an oil painting showing a goose girl who looks sulky, as she has befriended a goose and does not want to see it served for dinner: 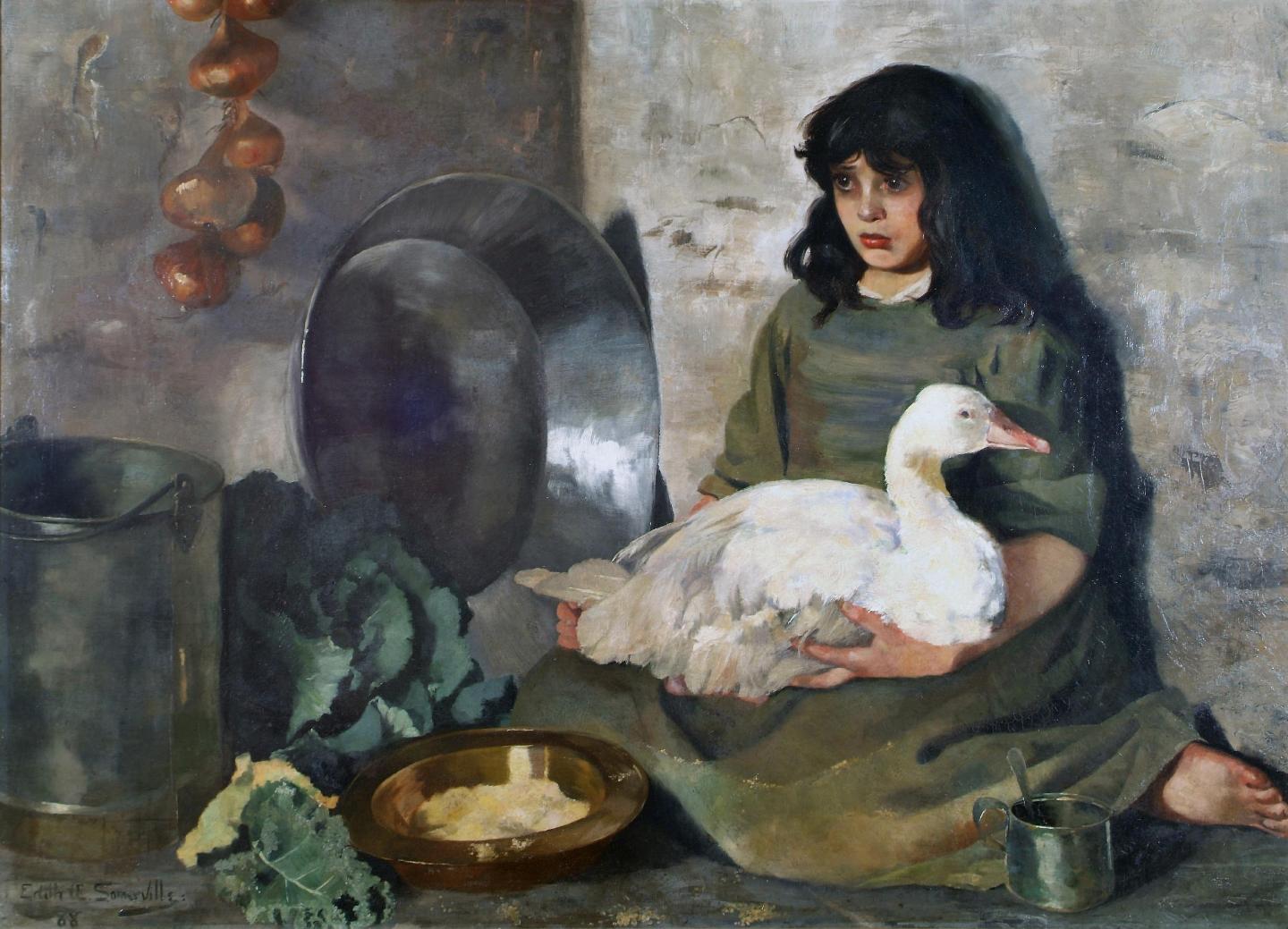 Johann Till the Younger (1827–1894) was an Austrian genre painter. He trained in Vienna under his father Johann Till the Elder, and studied at the Academy of Fine Arts in Vienna under Leopold Kupelwieser and Christian Ruben. He was member of the Künstlerhaus, an association of visual artists in Vienna. The following image comes from Tutt’[email protected] Masterpieces: 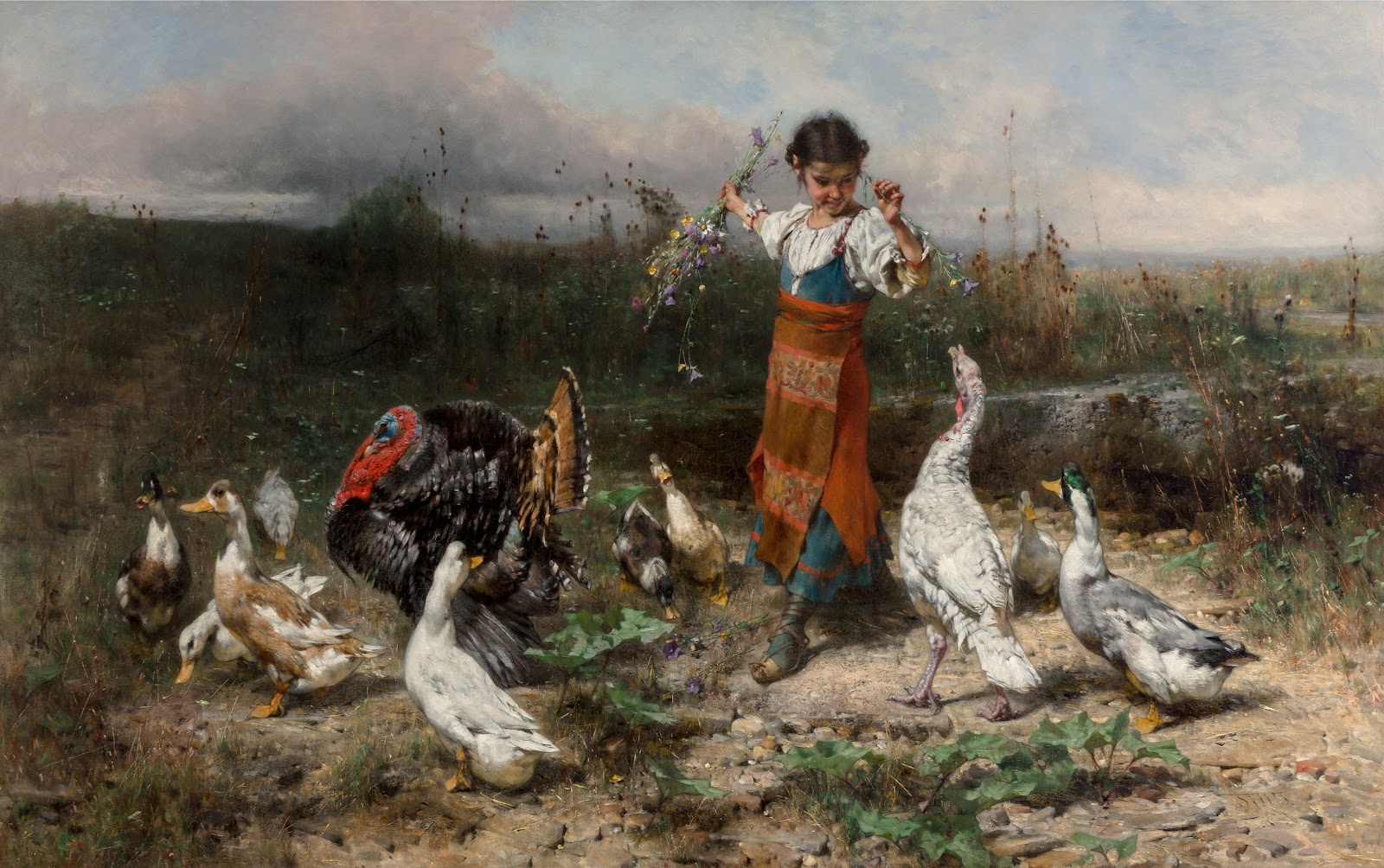 Johann Till – The little goose girl

Gustaf Theodor Wallén (1860–1948) was a Swedish social realist painter, graphic artist, cartoonist and sculptor. He studied at the Academy of Art under George von Rosen. In 1887 he won a travel award to study in Paris at the Académie Colarossi and, under William Bouguereau, at the Academie Julian. The following image comes from the Art Renewal Center: 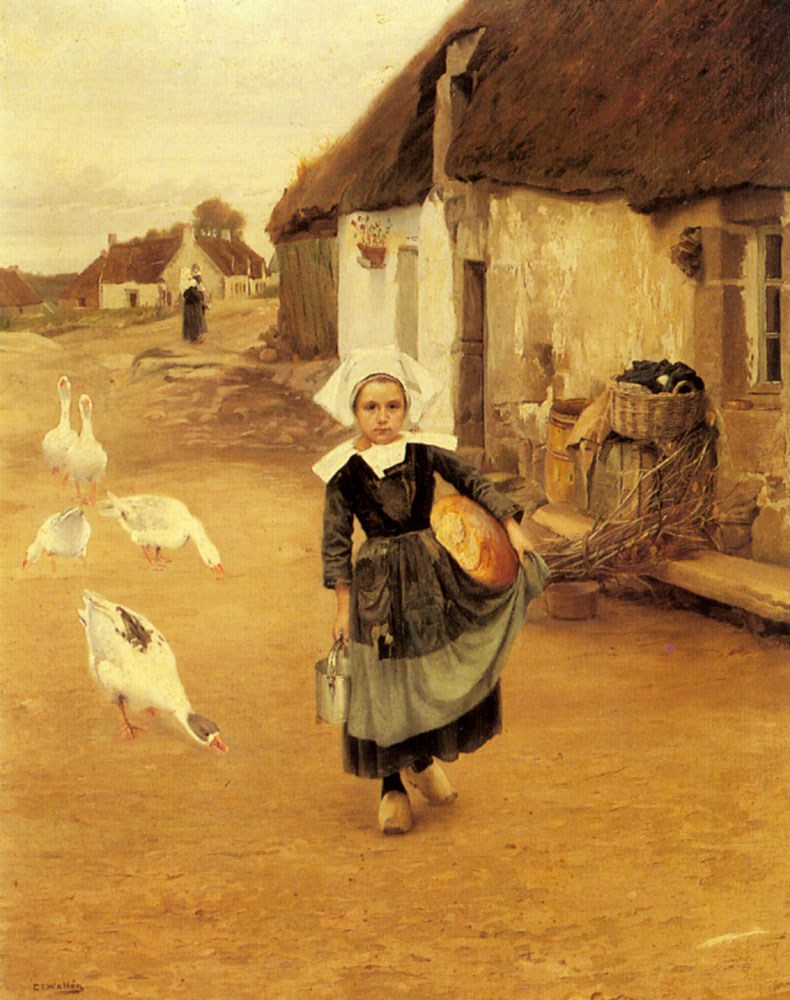 Václav Brožík (1851–1901) was a Czech academic painter. He went to Paris in 1876, and for the rest of his life he divided his time between Paris and Prague. He painted scenes from Czech history, portraits, genre paintings, and landscapes. He was influenced by the two great French naturalist painters of rural life, Jean-Francois Millet and Jules Breton, as can be seen in the following work in the National Gallery in Prague: 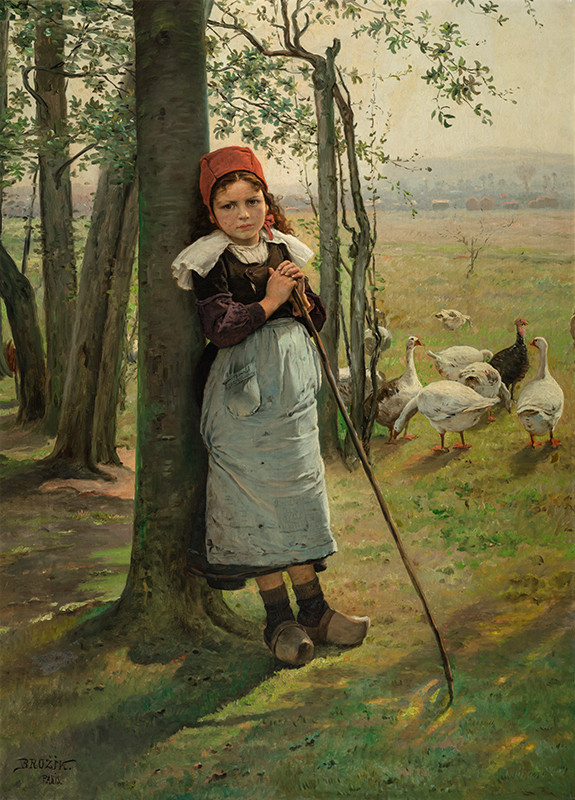 The Polish realist painter Antoni Gramatyka (1841–1922) studied art in Kraków and Vienna. He mostly worked in Kraków and its neighborhood. He painted landscapes, portraits, church polychromes, day-to-day life in Kraków and rural scenes in surrounding villages. 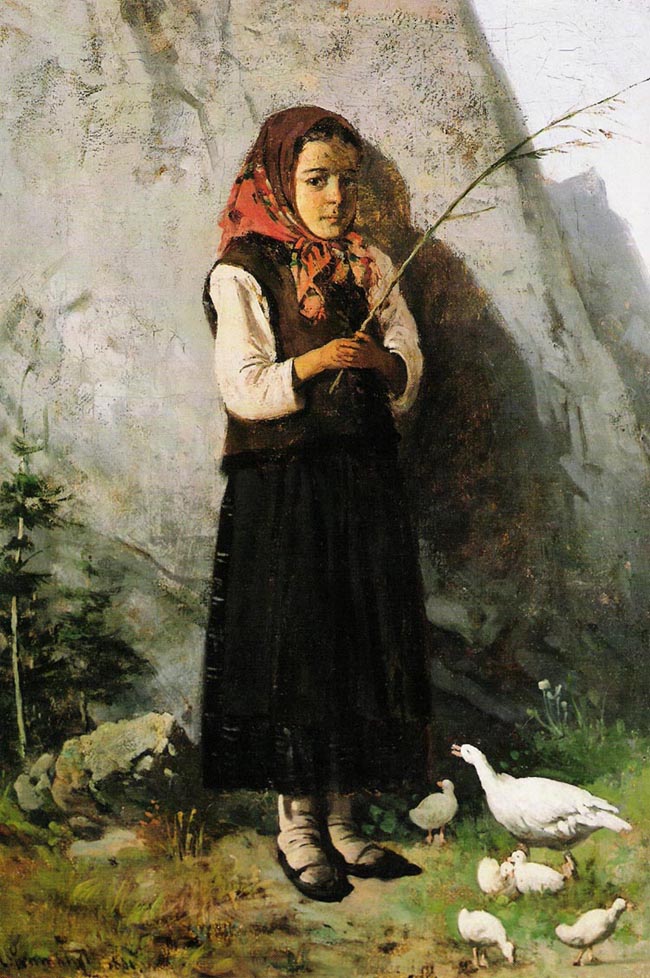 Finally, the great academic painter William-Adolphe Bouguereau, who had so often represented peasant girls, has also made one goose girl (image from the Art Renewal Center):