Some islands are conventionally associated with a continent. For example, Japan and Indonesia are islands in the Pacific, but they are considered to be part of Asia. There are many islands scattered throughout the Pacific that are not associated with any continent; they are known collectively as Oceania. Oceania consists of three sections: Polynesia, Melanesia, and Micronesia. This post will be about Polynesia; Melanesia and Micronesia will be covered in Girls of Oceania Part 2.

Polynesian people originated in Taiwan. Over the course of many generations, they migrated south to Philippines and Indonesia, then east until they reached the island groups of Samoa and Tonga about 1000 BC. They remained in Samoa and Tonga for over a thousand years. Then, in a relatively short time, they spread throughout the eastern Pacific. Polynesia expanded to Hawaii in the north, New Zealand in the southwest, and Easter Island in the southeast. This is a huge area of ocean, millions of square miles, but it contains only about 118,000 square miles of land, of which 103,000 square miles are in New Zealand.

These remote islands developed a mystique during the era before air travel, when visiting an isolated island was like going to another planet, with little to no contact with the outside world. There is a romance in being so detached from the rest of the world. In the days of sailing ships when the male crews may have spent weeks without seeing a woman before stopping at a Polynesian island, the women of the islands were of particular interest. Polynesia became famous for women hula dancers, but young girls were also hula dancers.

The first example of a children’s hula, called “keiki hula” in Hawaiian, is this photo of Shirley Temple in her hula costume from the movie Curly Top. This was not an island movie, but hula dancing had become popular everywhere. Polynesian costume looks cute and feminine and therefore is appealing to girls who are not Polynesian. An image of non-Polynesian girls in grass skirts by Shannon Richardson was posted on Pigtails in Paint here. 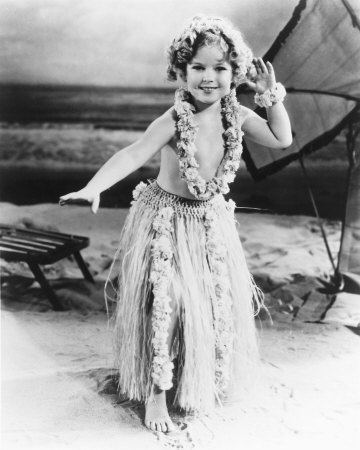 Hulas, including keiki hula, are more popular in Polynesia than elsewhere. The next two images show keiki hula shows in Hawaii, the first at the Kona Inn in the 1940s; the second at a shopping mall in the present century. 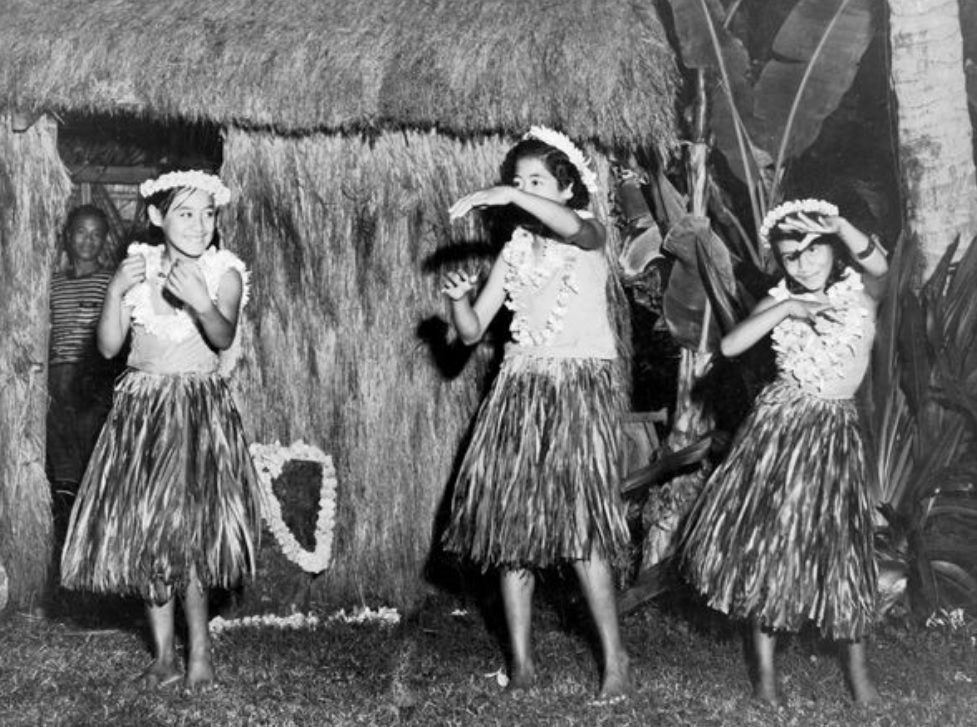 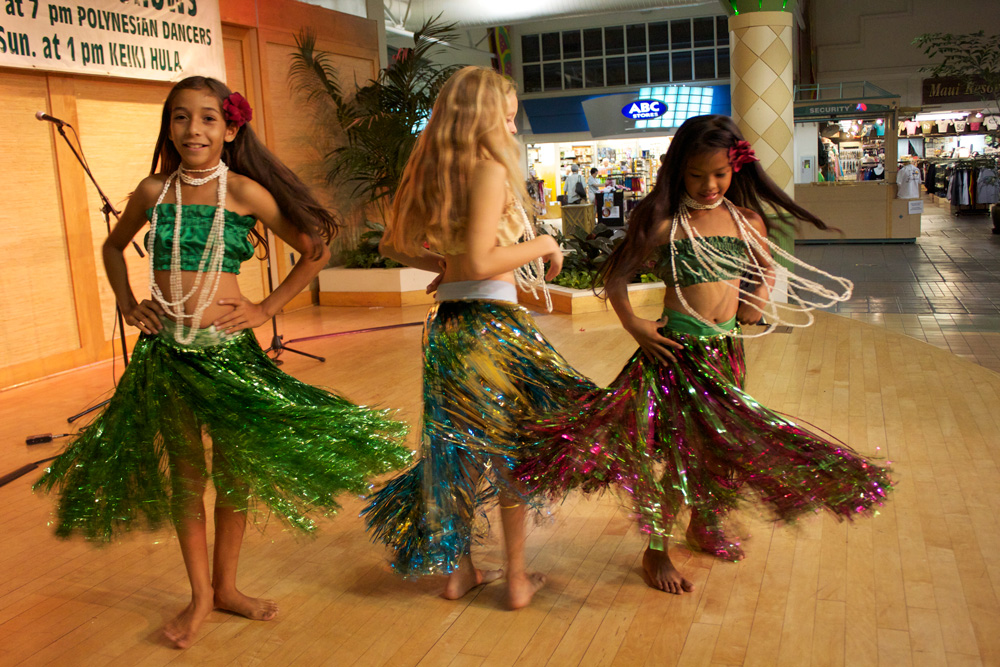 Hula girls have inspired several painters, including John Yato. Yato was born in Japan and his family moved to California when he was nine years old. He specializes in bright watercolors of various parts of the world, including the Pacific islands. The following two paintings by John Yato were inspired by Polynesian girls. 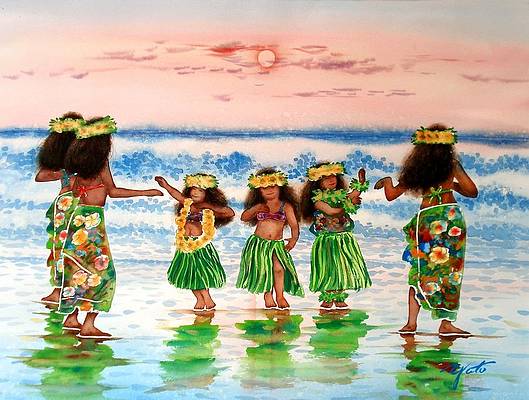 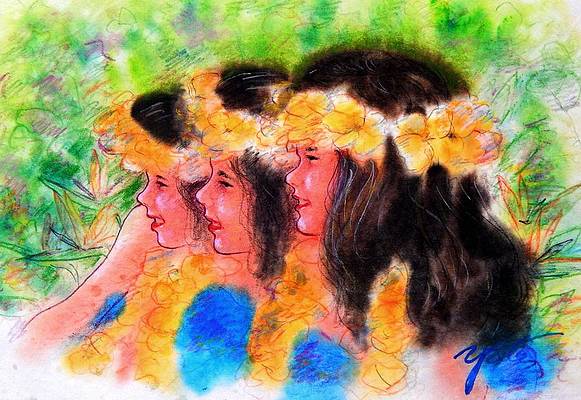 Hawaiian girls are featured in cartoons as well as fine art. Lilo and Stitch, one of the best known Hawaiian-themed cartoons, was released by Disney in 2002. This story of a 6-year old Hawaiian girl who adopts a creature from outer space was a very successful movie. Sequels and a television series of Lilo and Stitch have been made. 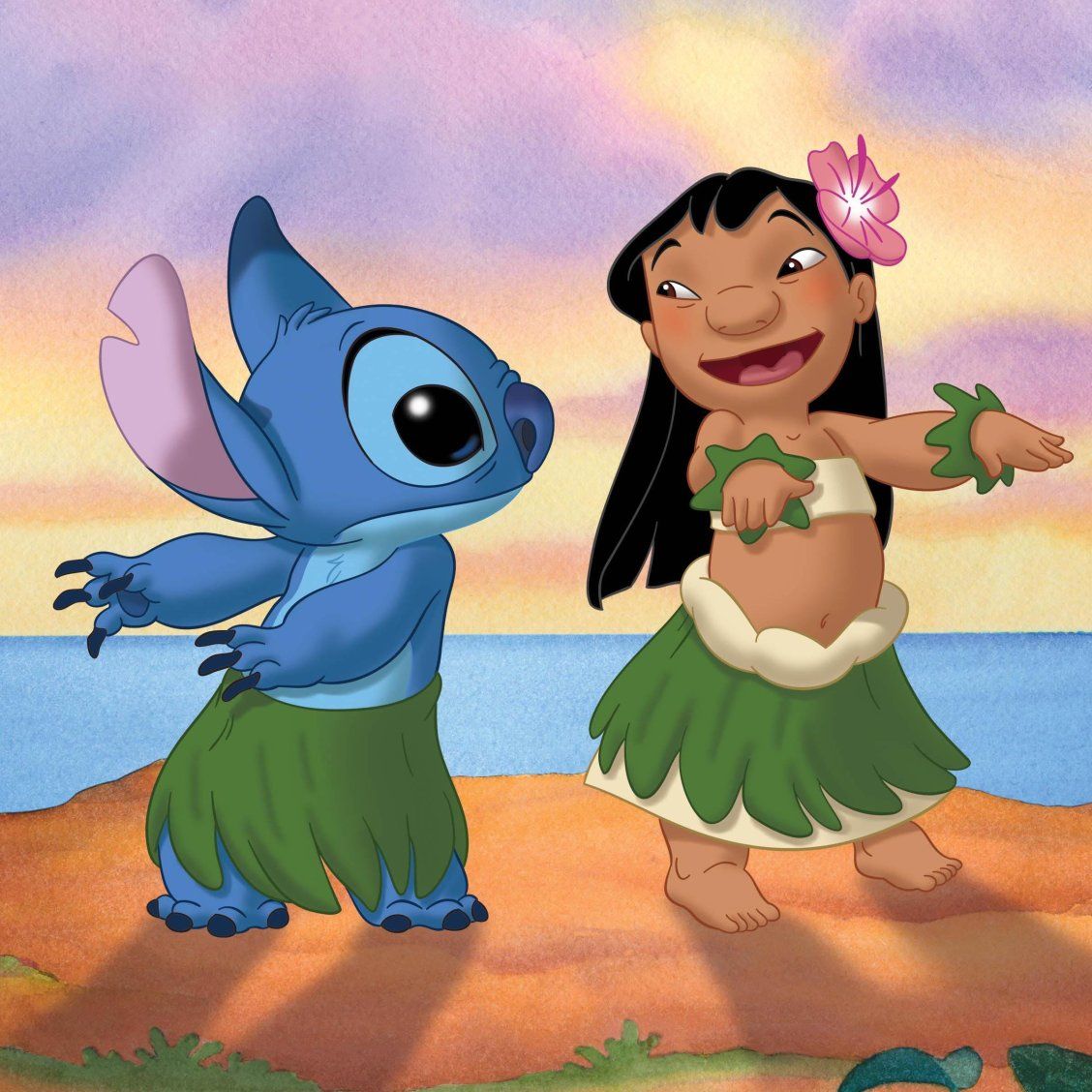 Barbara Bradley was one of the 20th century’s outstanding illustrators. She made many illustrations of young girls, and I am surprised that she has not already been featured in Pigtails in Paint. Her typical style of drawing was more realistic, but she did a series of Hawaiian kids illustrations for the Dole pineapple company in a cartoon style in the late 1960s and early 1970s. Barbara’s children were models for the Hawaiian kids. 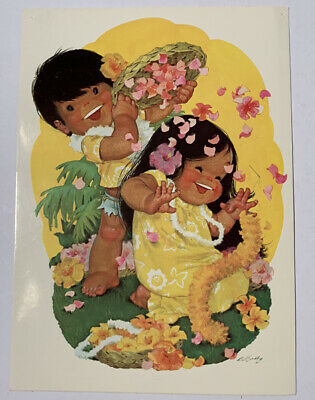 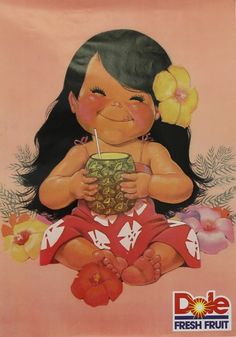 In the limited amount of research done for this post I did not find any serious sculptures of young Polynesian girls, but there is a lot of kitsch; bobble head dolls, dashboard ornaments, and souvenir figurines. An example shown below is a solar powered bobble head of a girl playing the ukulele. 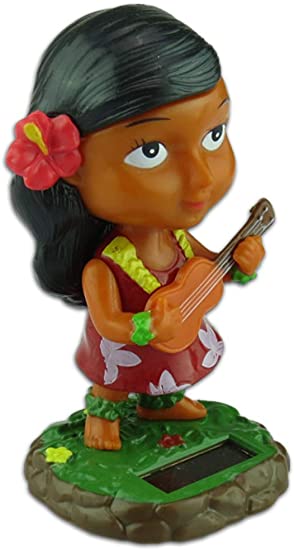 Up to this point, all of the images have been of Hawaiians, or at least of generic Polynesians that could be Hawaiian. New Zealand is by far the largest and most populous island group in Polynesia, but for some reason doesn’t have as much young girl art as Hawaii or French Polynesia. Perhaps New Zealand is too big for the feeling of being on a remote isolated little piece of land. The photograph below is from the studio of one of the great early woman photographers, Elizabeth Pullman. She had an intense interest in the Maori (New Zealand Polynesians) and photographed many of their important leaders. The photo below is an anonymous Maori woman and two girls. 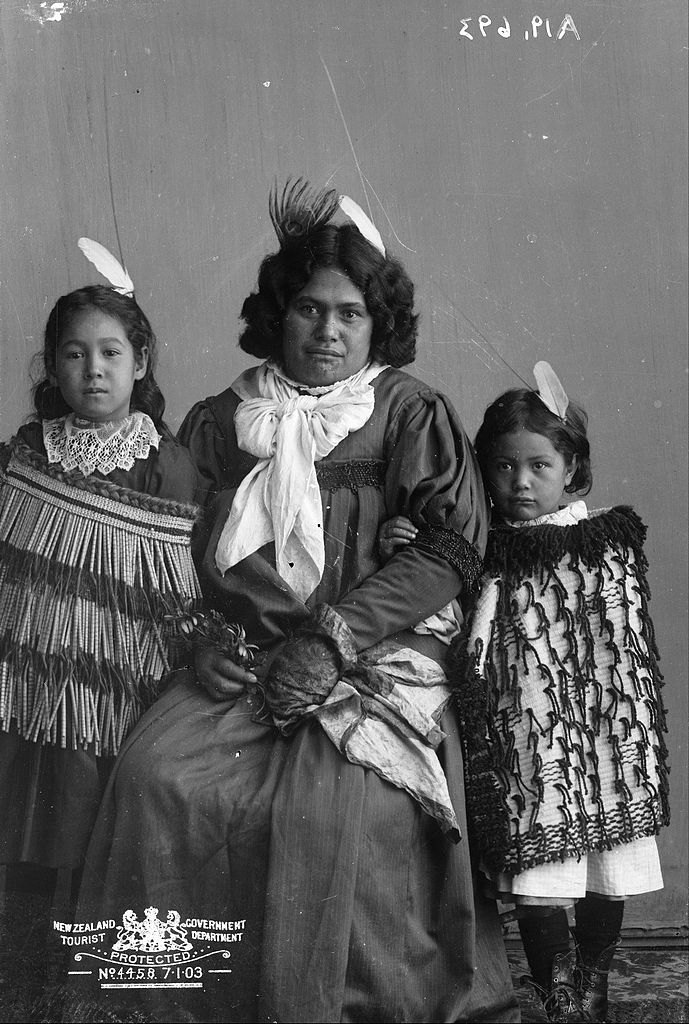 French Polynesia, which includes the island of Tahiti, was the home of the painter Paul Gauguin for several years. Gauguin created many paintings of Tahitian women, but few paintings of young girls. Two of his paintings of Tahitian girls are shown below. Gauguin was probably influenced by photographer Charles Georges Spitz. Spitz lived in Tahiti, but the photograph posted here is from the Tuamotus Islands. 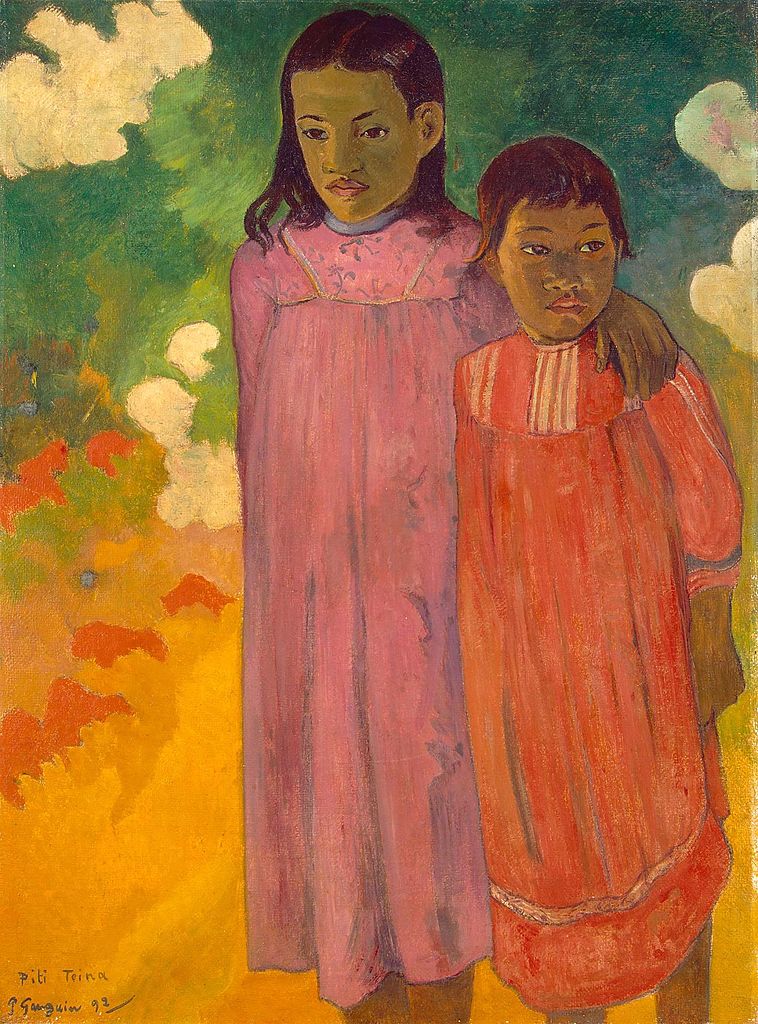 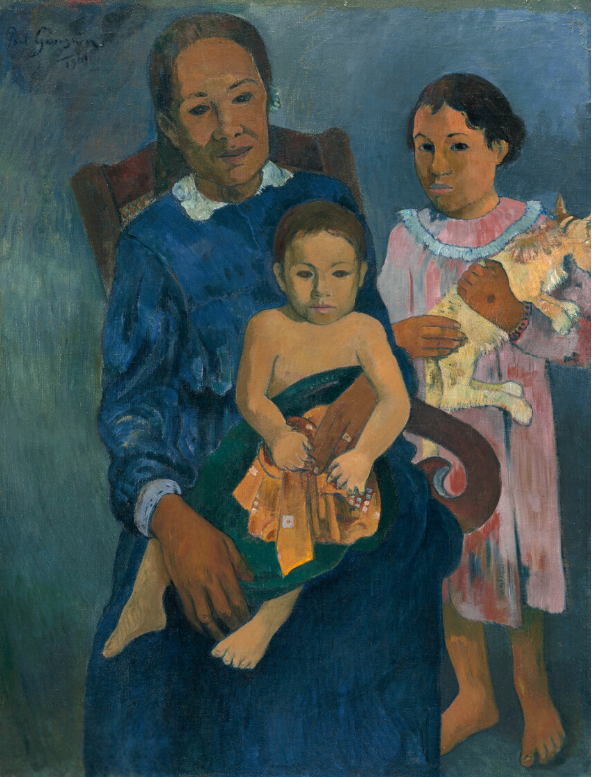 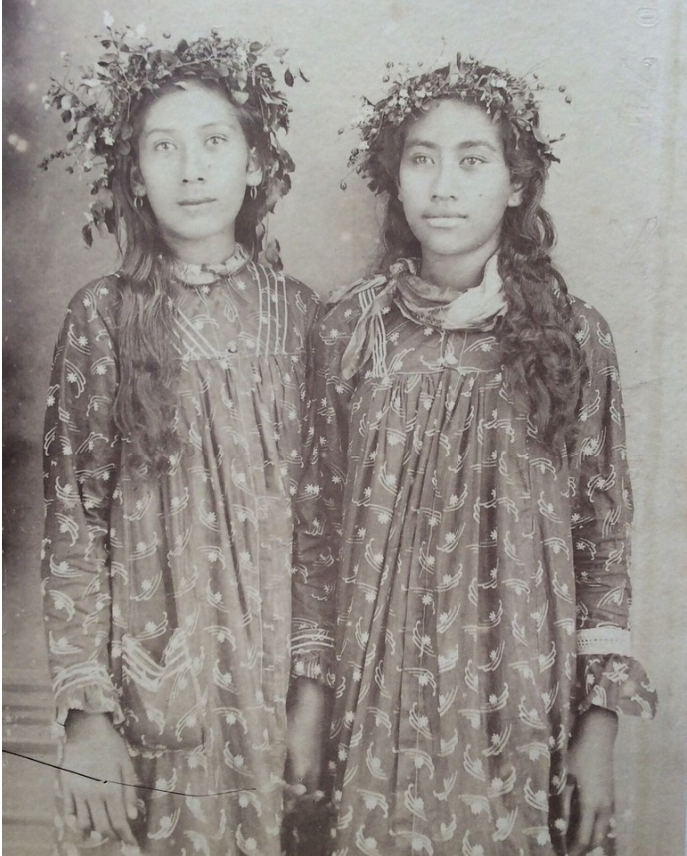 Roger Parry was another French art photographer and he was also a war correspondent. Parry visited Tahiti in 1932–1933, and took at least four nude photographs of young Tahitian girls. Two are posted here, followed by a photo from Frederick O’Brien. O’Brien was not an artist; he was a bohemian wanderer and social activist who was in the Marquesas Islands, French Polynesia in 1913–1914. His picture of the kava drinker with two women and a girl became well known. It was published in O’Brien’s book White Shadows in the South Seas in 1919, and in National Geographic Magazine about eighty years later. 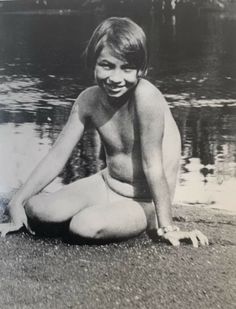 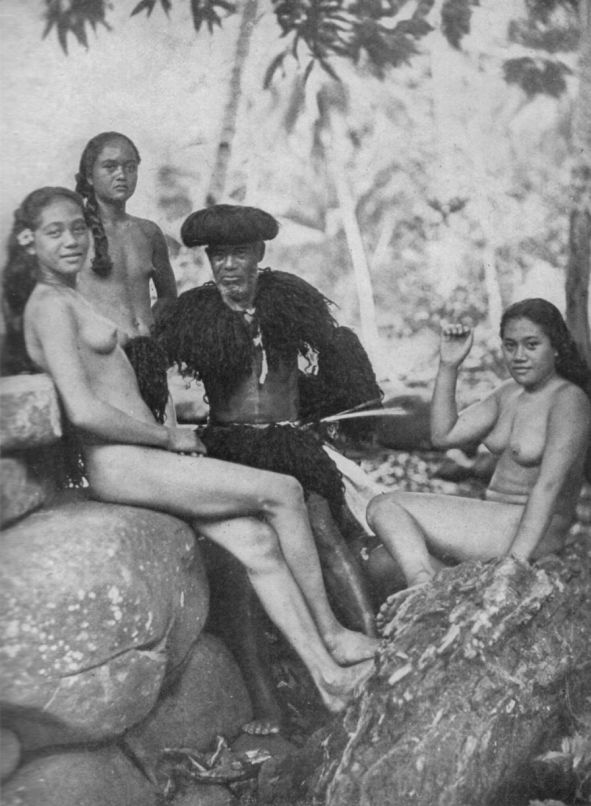 Only a few of the many islands of Polynesia can be covered in this post. Samoa will be the last group of islands considered here. Most of Samoa had been a German possession. It was formerly believed that various groups of people had certain distinctive characteristics. We Americans are commercial, therefore we have bobble head dolls from Hawaii. British are reserved, therefore we have formal studio portraits from New Zealand. French are artistic, therefore we have Gauguin’s paintings from Tahiti. Germans are scientific, therefore we have tomes detailing the ethnography, geology, botany, etc. of Samoa.

The two photos from Samoa are both from scholarly works. The first is from Die Frauenkleidung und ihre natürliche Entwicklung by Carl Heinrich Stratz. Stratz wrote that the picture is from a book by Selenka, but he does not say that Selenka was the photographer. This same image is found in several other early 20th century books. It is a good example of an ethnographic contrivance; an artistic picture disguised as ethnography to make it appear more serious and respectable. The second photograph is true ethnography with no contrivance. It uses a 14-year old girl to illustrate the physical characteristics of the Polynesian race. This image was taken from Naturgeschichte des Menschen, also by Stratz. The image is attributed to the Godefroy album. Godefroy was a German trading company that operated in the Pacific. This picture also appears in many other books, and in spite of the stiff pose has an innocent appeal. 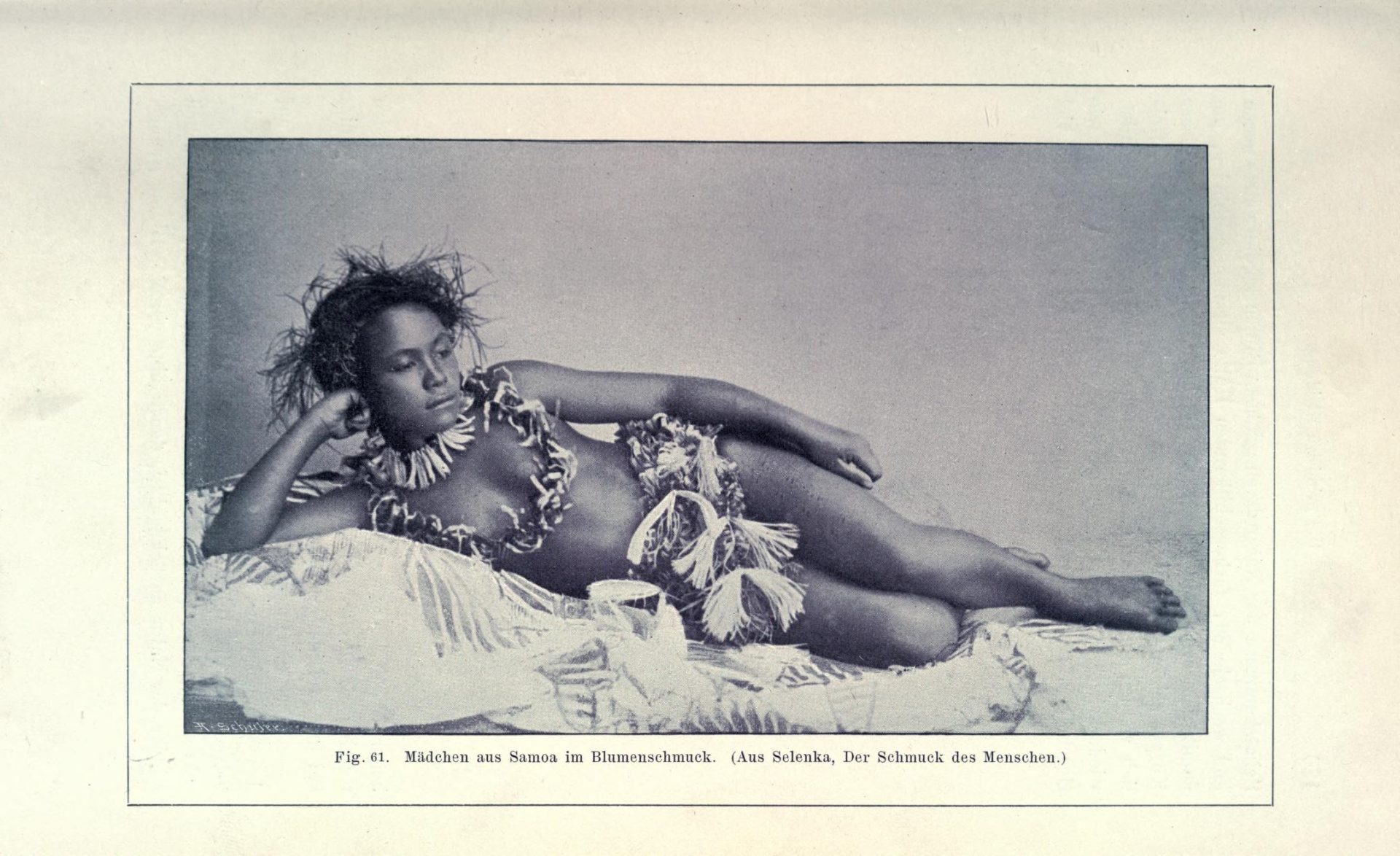