This little statuette is the best known work of art from the Indus Valley civilization, which was, with Egypt and Mesopotamia, one of the great seminal civilizations of the fourth to second millennia BC. The antecedents of the Indus valley culture go back to about 7000 BC. The high civilization began around 3300 BC, and reached its height during the period of 2500 to 1700 BC. Mohenjo-daro, one of the two great cities of the Indus Valley, was destroyed in an invasion circa 1500 BC, but vestiges lingered perhaps as late as 600 BC. Mohenjo-daro is now a UNESCO World Heritage site. 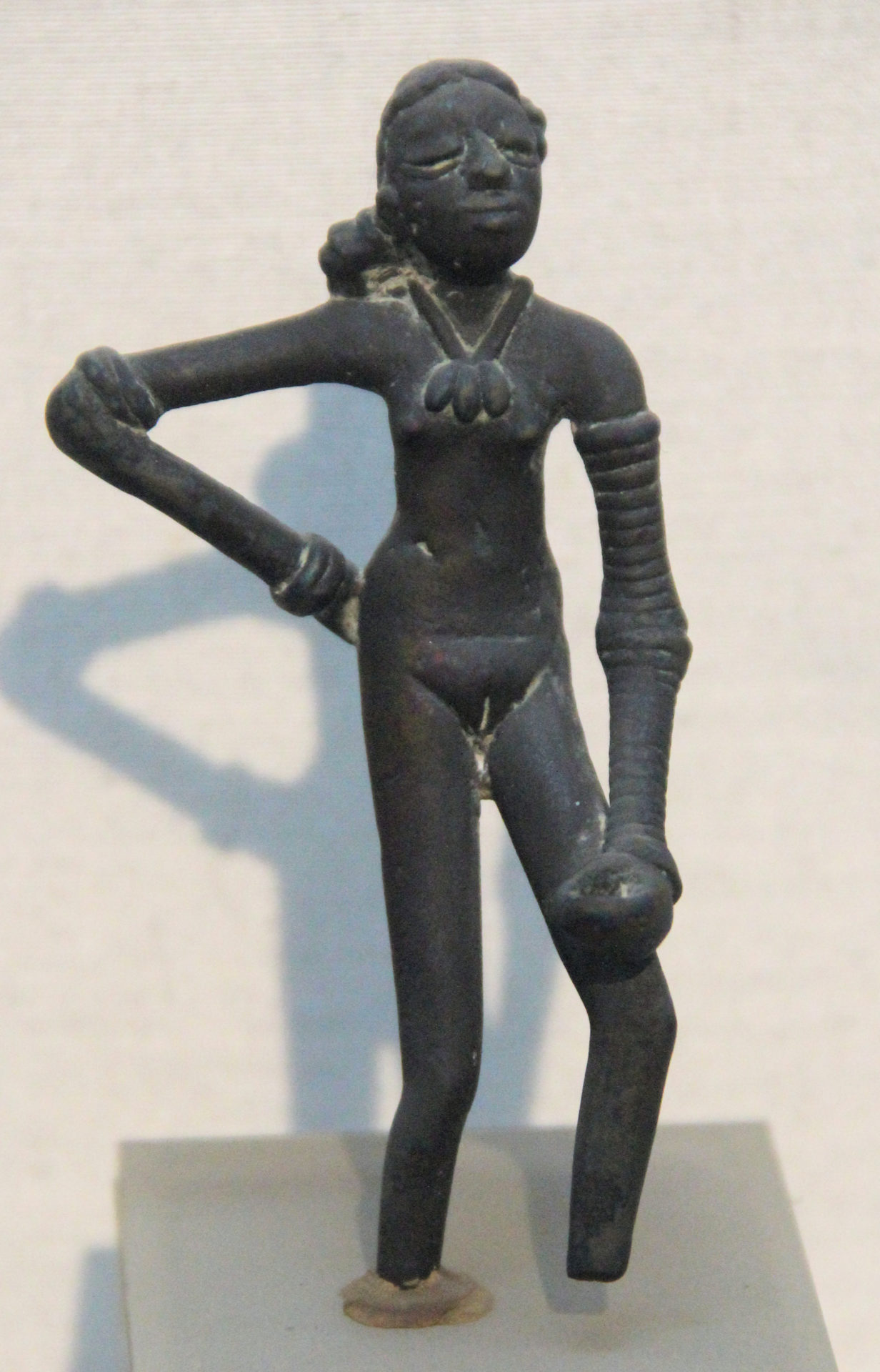 Of the three contemporary river valley civilizations; Egypt (Nile Valley), Mesopotamia (Tigris – Euphrates Valleys), and the Indus Valley, the Indus had the greatest geographical extent. It was also the last to be known to modern historians, having been discovered in 1921 near Harappa, Pakistan. It became apparent that the ancient Indus Valley people were masters of technical skills such as city planning, construction, and drainage. They are believed to have spoken a Dravidian language, and may have had a religion similar to Jainism. They had a system of writing, but we are not able to read it. It is peculiar that there was a form of writing on Easter Island that used characters very similar to some of the Indus characters. Easter Island is near the antipode, the farthest point on earth, from Pakistan.

The Dancing Girl figurine was found in the ruins of a house in Moheno-daro by archaeologist Ernest MacKay in 1926. It is estimated that it was made circa 2300 – 1750 BC. We don’t know if she was really a dancer, but her long limbs and graceful pose seem to indicate a dancer or acrobat. There is a reason that many of the best gymnasts and dancers are young girls. Females have narrower shoulders and wider hips than males. This gives them a lower center of gravity, and therefore better balance than males. Young girls, before their breasts are fully developed, have better balance than women with larger breasts. 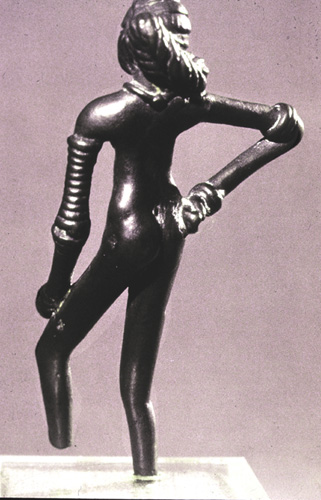 The bronze figure is 4.1 inches tall now that the feet have been broken off and lost. It was cast by the lost wax method. The Indus Valley art that survives consists mostly of terra cotta figurines and carved stone seals. Dancing Girl is noted for the serene, perhaps arrogant facial expression. Her right arm is bent, and her left hand rests on her leg. She appears to be resting after a performance. The posture is like that of a figure on a pottery fragment from Bhirrana, in the Indus Valley region of India, dated to about 4000 to 3000 BC. Originally, something was held in Dancing Girl ‘s left hand. My guess would be that it was a stick with a ribbon like those used in rhythmic gymnastic performances. 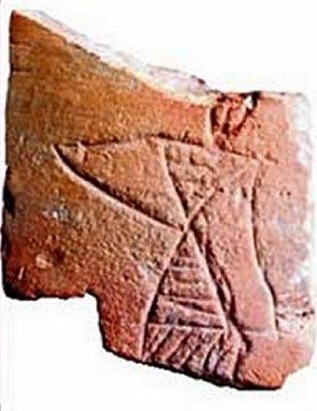 Dancing Girl has been said to resemble the modern Baluchi people of Pakistan. One archaeologist wrote that her face resembles an African. Why more bracelets on one arm than other? There are twenty-four bracelets on the left arm, and four on right. People have speculated about whether her dance was for a religious ceremony or merely for entertainment, but we have no way of knowing.

When Dancing Girl was discovered in 1926, India, Pakistan, and several other countries in the area were part of Britain’s Indian Empire. The statuette is now on display in the National Museum in New Delhi, India. Pakistan claims ownership, and has asked for it to be returned.

4 thoughts on “Dancing Girl of Mohenjo-daro”