Ancient Greek and Roman art has a realistic quality that sets it apart from the art of other ancient civilizations. Some types of ancient art, such as Egyptian, were for the purpose of conveying information more than for aesthetics. Greeks artists strived for an idealized version of realism. Romans based their art on the Greek, but with an important difference. Romans were less concerned with idealizing their subjects. If a Roman model had a less than perfect face or figure, the artist portrayed reality, warts and all. Today it is popular to display classical statues as white marble. In antiquity the statues were painted, making them even more lifelike. Current technology allows us to detect tiny remnants of paint invisible to the naked eye, and computer programs can then be used to generate an image of the statue as it appeared when it was painted. As far as I know, this statue has never been computer-restored to its painted condition. 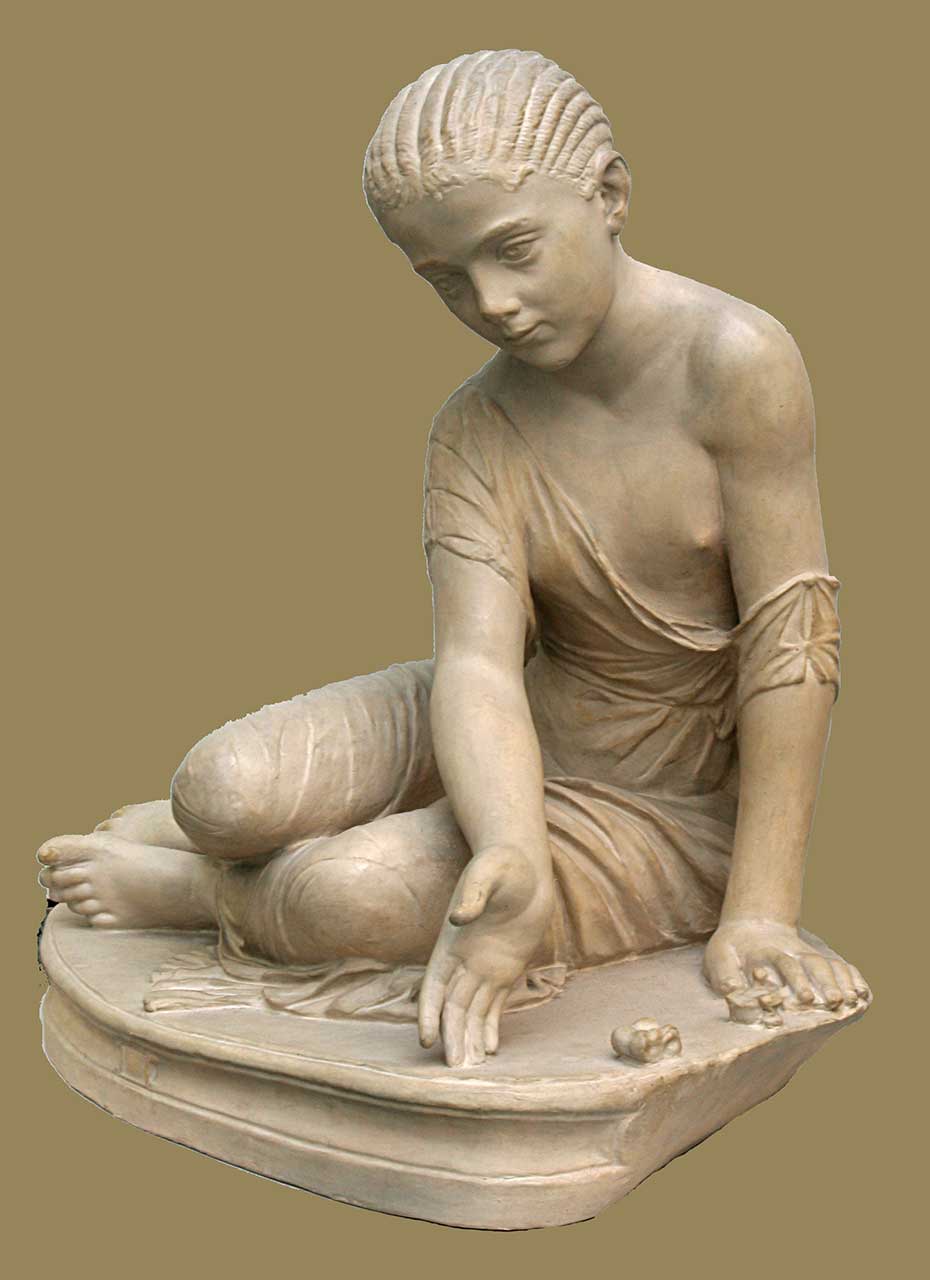 The Roman statue pictured here has been given the modern title Knöchelspielendes Mädchen (Girl Playing Knucklebones) by Altes Museum in Berlin, where the statue is now on display. It was found on the Caelian Hill in Rome, Italy. This statue was sculpted about AD 130-150, the period when Roman art was at its height. It is a copy of a Hellenistic Greek original. Knucklebone games were very popular with children, especially girls, in antiquity. Sources on the internet say that knucklebone games were similar to modern dice games or jacks. They don’t say what was used in place of the rubber needed for a game of jacks.

The girl wears a chiton that may not have been as clinging as shown in the statue. That was a convention of Greek art that was copied by the Romans. Her cornrow hair style was popular in ancient Rome, and may be even more popular in sculpture than in life, due to the ease of carving this style in marble.

Two more versions of the statue are shown below. The first, from the British Museum, shows a more mature girl with a different hair style. It is Roman, from the first or second centuries AD. The second is a French copy made of cast iron in about 1850. 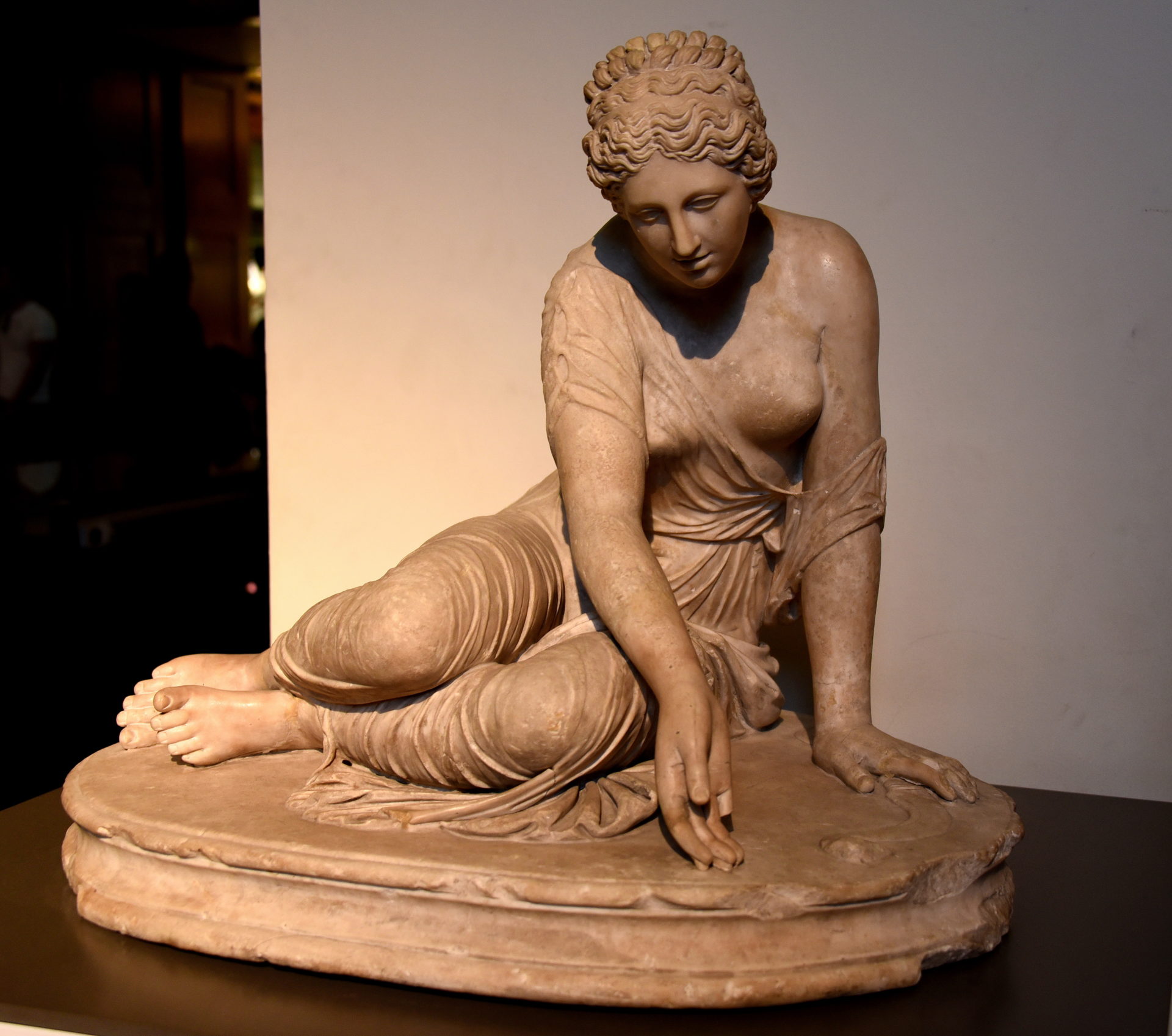 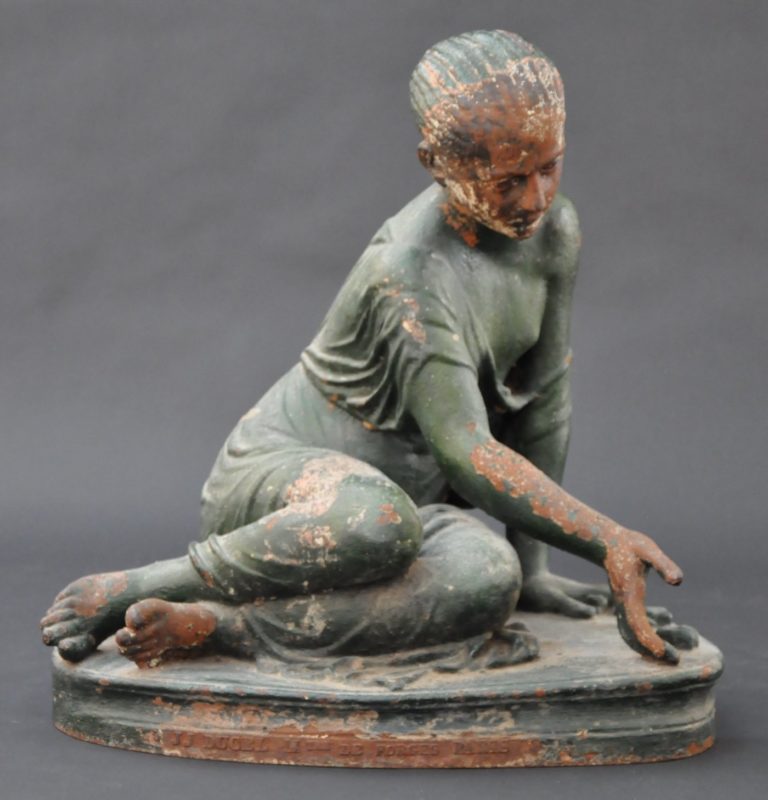 Most Roman art portrayed adults, political leaders, and deities. Statues of children are less common, and the relatively few that were made were less likely to be preserved. It seems strange now, but there was a time when Roman works of art were considered to be old junk rather than valuable antiques. Most bronze statues were melted down for scrap metal. Many marble statues were burned for lime. Buildings (such as the Coliseum before it was protected) were used as sources of building stone for new structures. We are fortunate that Knöchelspielendes Mädchen has survived.

1 thought on “A Roman Knucklebone Player”