After poor French peasant girls covered with rags, we will now see English beauties wearing a clean white pinafore while they take part in harvesting and haymaking … probably a less realistic view of rural life.

The son of a painter, George Clausen was born in London on April 18, 1852. He first trained as a draughtsman in the office of the company George Trollope & Sons. He studied at South Kensington School of Art between 1873 and 1875. Then he worked with several academic painters, first in the studio of Edwin Longsden Long, next in 1883 at the Académie Julian in Paris, under William-Adolphe Bouguereau and Tony Robert-Fleury.

He soon showed an interest in country life and landscape, and he was particularly influenced by Jean-François Millet and Jules Bastien-Lepage. He admired the naturalism of Bastien-Lepage, and he would write a long essay about him in André Theuriet’s memoir; he praised him while seeing a limitation in his “literal representation” of nature. Indeed, Clausen would to some extent be influenced by Impressionism.

He loved to paint the countryside and rural life in northwest Essex. His major works can be found on Wikimedia Commons, the Art Renewal Center site, ArtUK, and Tate. Many drawings by him, as well as some pastels and watercolours, can be found in the Royal Academy Collection.

Clausen won official recognition, being elected to the Royal Academy, first as an Associate in 1895, then as Academician in 1906, and he taught painting there. During World War I he served as an official war artist. He was knighted in 1927. He died in Newbury, Berkshire, on November 22, 1944. Further details about his life and works can be found on The Victorian Web and the site of The Hundred Parishes Society.

I now present a few paintings by Clausen of peasant girls involved in harvesting or haymaking. They all wear a white dress or a white pinafore. I suspect that the scenes must be idealised, as it is difficult to remain so clean while participating in a rather dirty work.

A girl in a wheat field: 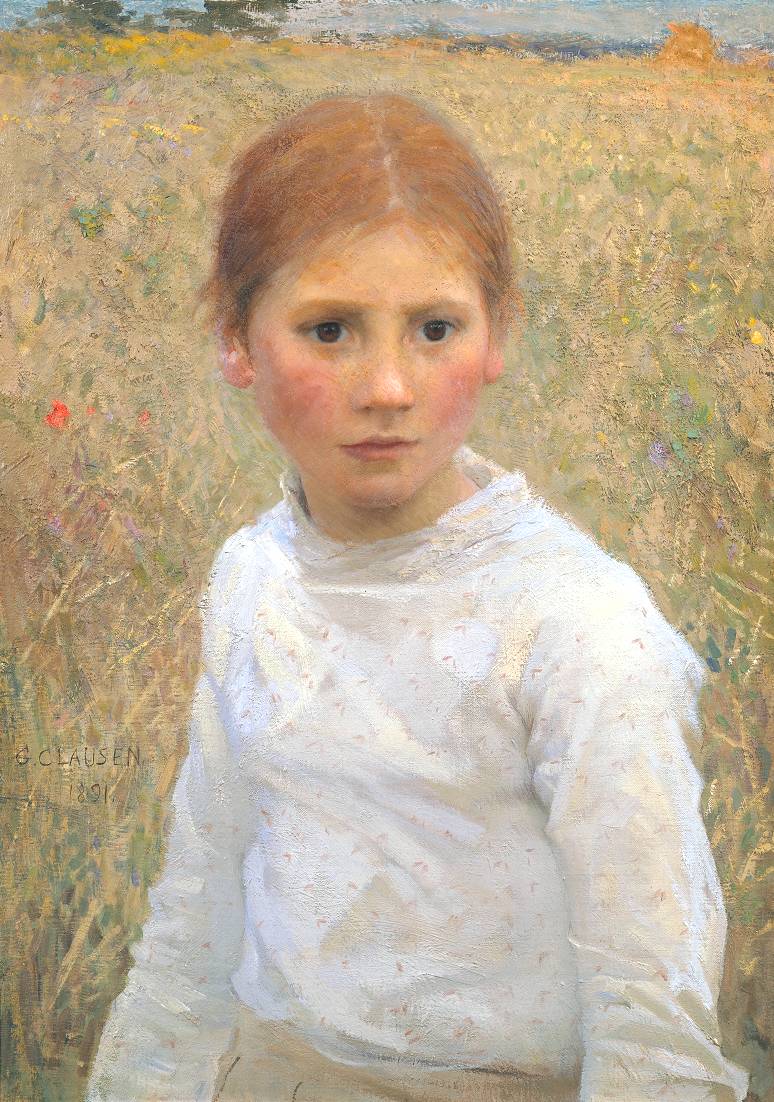 Next, one near a basket of wheat, while a man harvests behind: 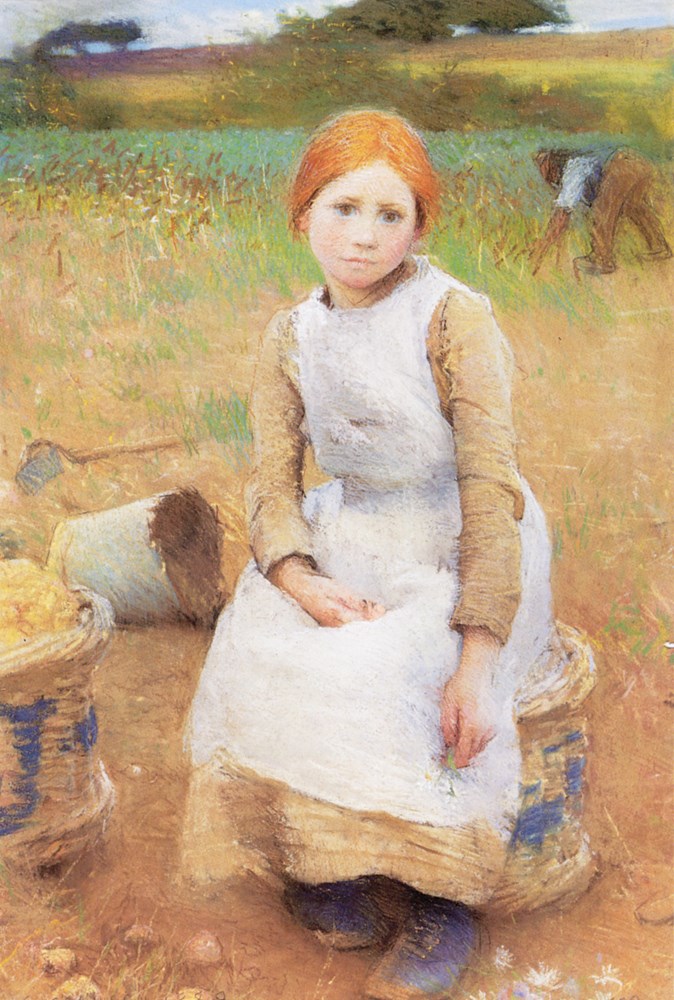 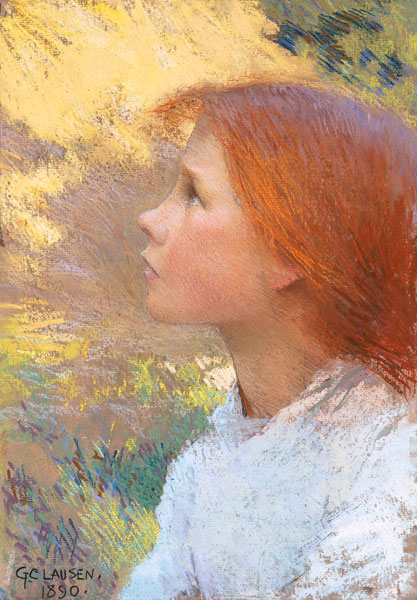 Here we don’t see a field, but the title says all: 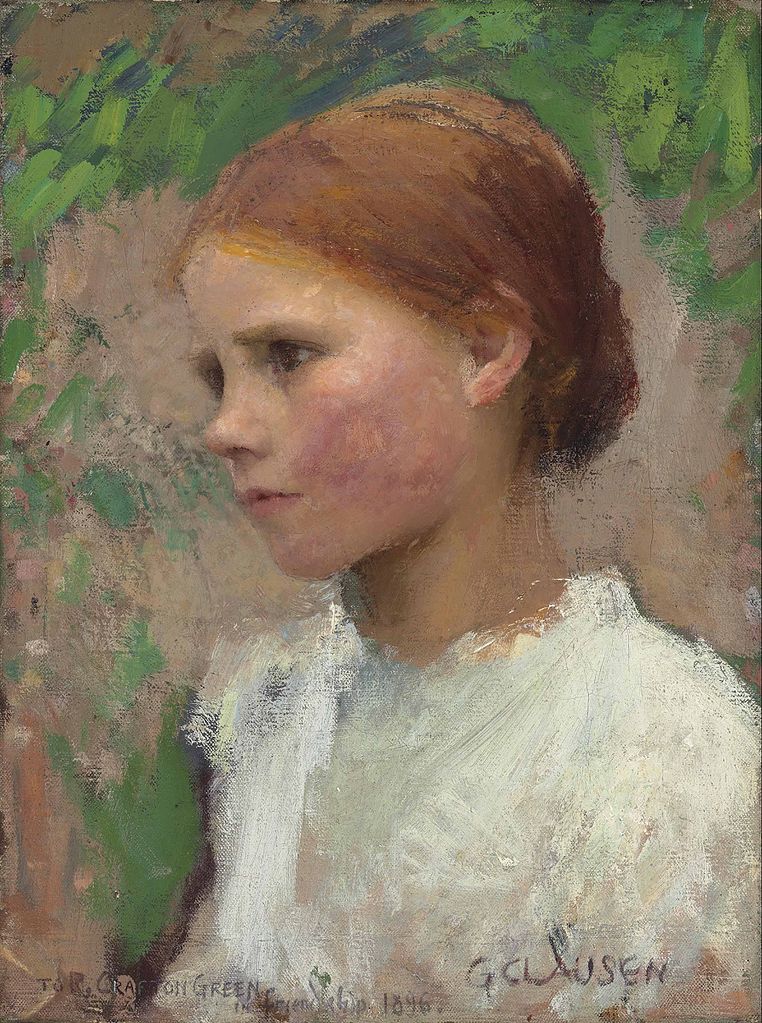 The rake indicates that the girl has been working: 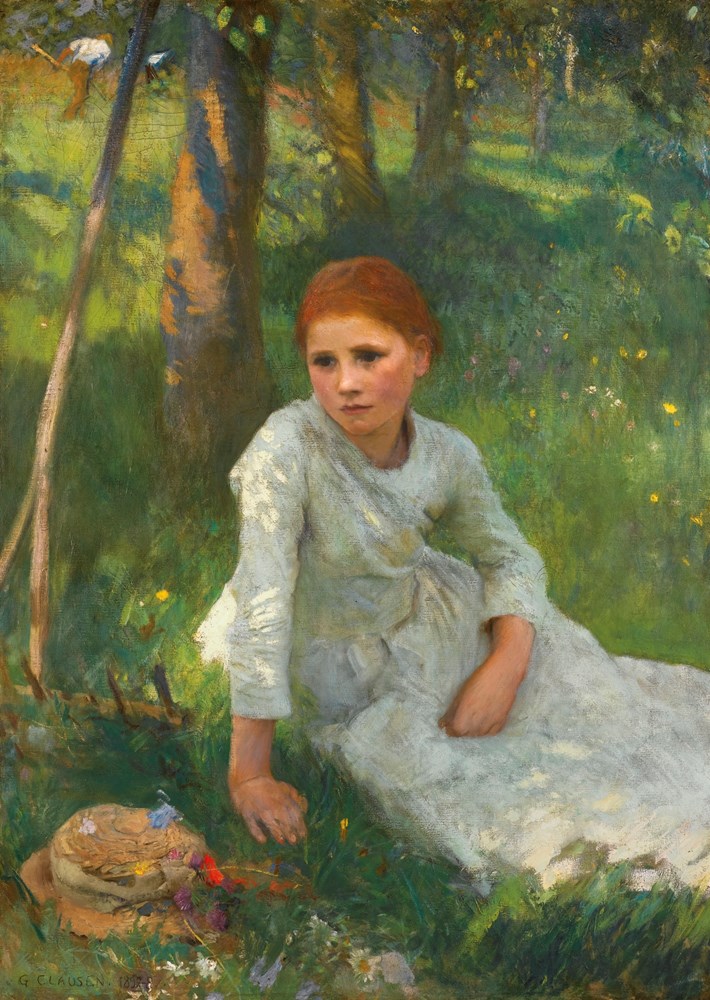 This girl is not working, but going to school; however, she still wears a pinafore and she is walking along a field: 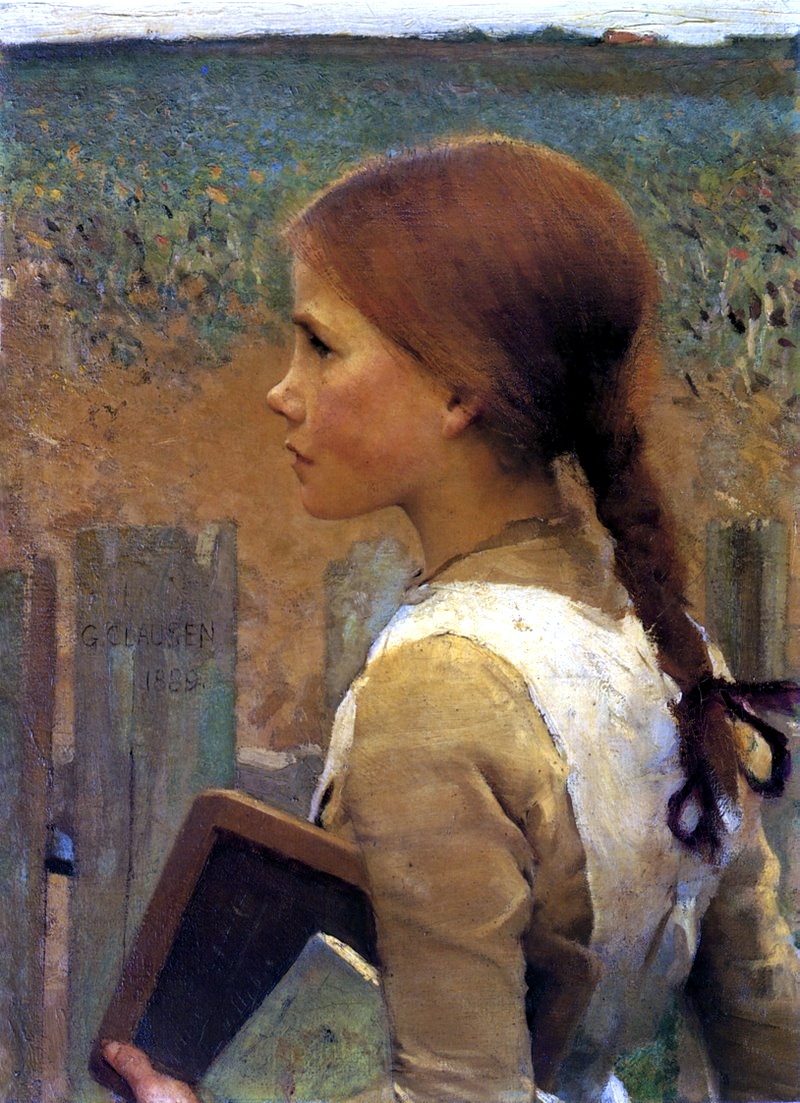 Readers will probably have noticed that these girls all have brown eyes and auburn hair. Maybe Clausen selected them because these colours are in harmony with those of their work environment: straw, hay, trees and soil. Indeed, he painted several other girls with different eye or hair colours and in a different environment; I mention a few ones here, with a link to the images. First a girl with auburn hair but blue eyes; she still has a white pinafore, but the background only vaguely reminds of hay. Next, two girls with black hair and green eyes: one with a greenish scarf and a dark green coat, surrounded by bright greenery, and one in a green meadow. Finally a girl indoors, with black hair and brown eyes, in front of a brown wall.

We have thus seen how in the choice of a painting, the harmony between the subject and the topic can sometimes involve some little details that would escape the ordinary onlooker.