After The Goose Girl of Mézy, here is another rural girl covered with rags.

Jules Bastien-Lepage was born on November 1, 1848, in the village of Damvillers, near Verdun. His father owned a vineyard. He went to Paris in 1867, where he worked some time at the postal service. His first application to the École des beaux-arts de Paris was unsuccessful, but he was nevertheless allowed to follow courses as an aspiring student. The next year he entered the workshop of the academic painter Alexandre Cabanel, where he was trained in drawing. In October 1868, he was finally admitted to the École des beaux-arts. In 1870-71, he fought in the Franco-Prussian war, and was wounded. Then he returned home, where he painted villagers.

In 1875, he won the second place for the famous “Grand Prix de Rome” with his painting L’Annonciation aux bergers. He would soon be recognized in France as the leader of the emerging Naturalist school. His brother Émile (1854–1938) also became a painter, studying with him. Jules died of cancer on December 10, 1884 in Paris, at the age of 36.

His works can be found on Wikimedia Commons, the Art Renewal Center site, WikiArt, and ArtUK. They include many portraits, but also depictions of rural life, in particular work in the fields.

I present here my selection, the portrait of a poorly clad little farm girl. It is an oil painting on canvas, 162.5 × 125.7 cm² (63¾ × 49¼ in²). This image from the Art Renewal Center, with its predominant green colour, is different from most other renderings, which have large patches of yellow and orange. I cannot ascertain which one is more faithful to the original painting, since I don’t know in which month it was made: green would prevail in spring, and orange in autumn. 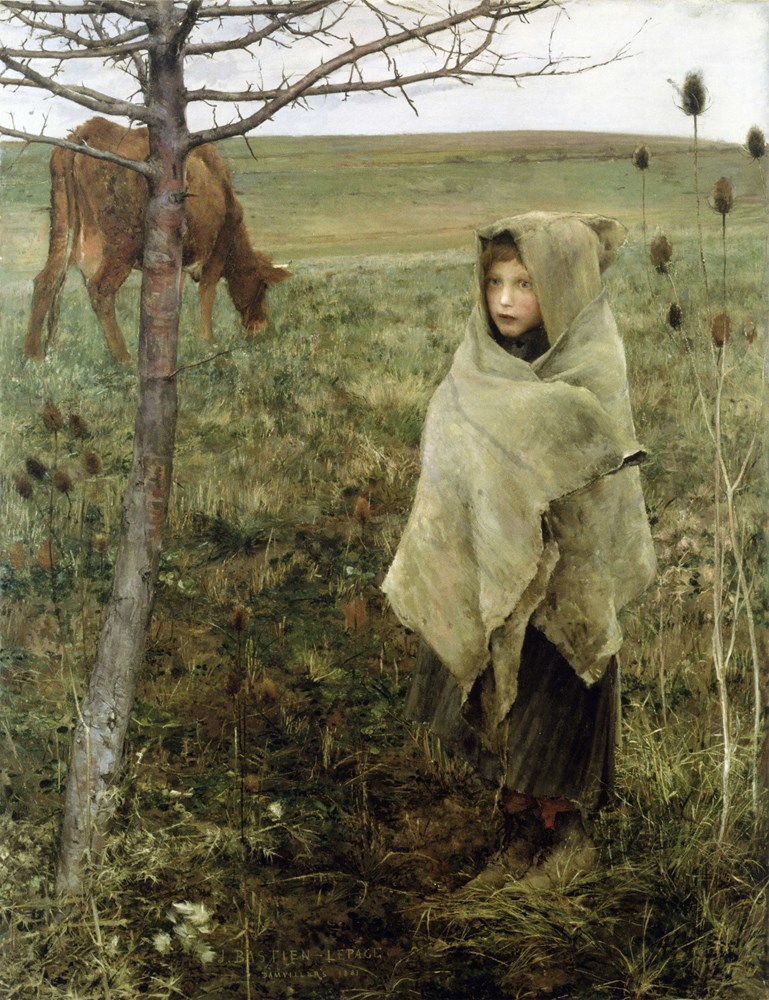 The French title translates as “Poor Warbler.” Indeed, the French word fauvette translates as “typical warbler” (a bird in any species of the genus Sylvia). It is also a forename for girls, but a quite rare one: according to French official statistics, only 76 girls born in France between 1900 and 2018 were named Fauvette (and none later than 1970). The bird’s name comes from the word fauve that designates the fawn colour, a somewhat dark orange—the art school of Fauvism is named after that colour. This makes me even more puzzled about the colour of the landscape in the original painting: is it a “fauve” scene?

Bastien-Lepage did another painting of a poorly-clad peasant girl, titled Young Girl. Compare the two renderings of it by the Art Renewal Center and by WikiArt.

My third post in the series will be devoted to the peasant girls painted by George Clausen, in particular to the colour of their eyes and hair, which is in harmony with their participation in harvesting and haymaking.