Graham recently sent me this little gem from his collection. After some digging, I found it was one of many sketches and paintings by Georges Redon made for display on dinner menus. One restaurant to make use of Redon’s art was Café de Paris, Armenonville, Pré Catelan. It was later purchased by someone named Fouquet who continued to make use of this artwork. 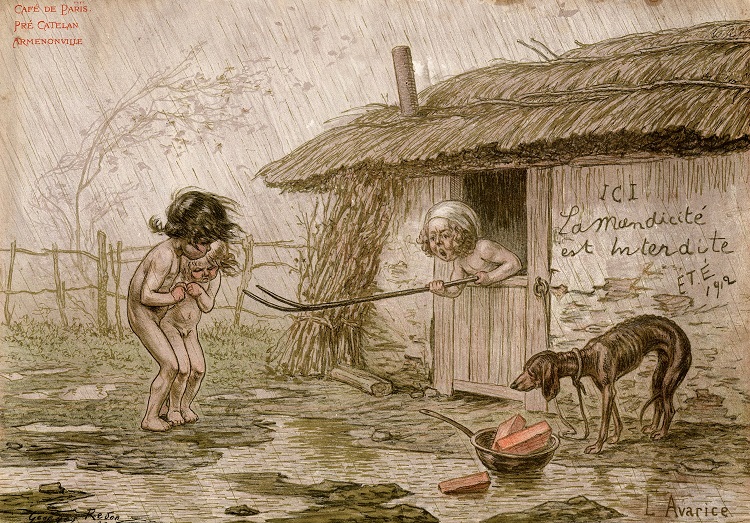 This is quite an interesting choice for menu artwork because it conveys an inhospitable attitude. Such a subject choice would be unheard of in a modern day business model. Despite our modern sensibilities though, the design may have served its purpose at the time by suggesting to respectable patrons that any riff-raff would be kept away.

There are many examples of Redon’s work on the internet, many featuring children. There is a nice collection of some of the artist’s posters here. Below is a scan of the menu that accompanied this particular piece.

[Addendum: 2019/10/12] I knew there was a lot of material about Redon on the net but did not have the time to do extensive digging. Fortunately, one of our readers, Patricia, was gracious enough to do some follow-up and direct us to some of the gems. The image on this menu refers to Greed and the text translates to: “Begging is prohibited here, Summer 1912”.

Patiricia also found a number of other menu designs centered around children (be advised that some links are auction sites and may disappear over time): here, here and here. She also sent links to other satirical artwork of interest: here, here and perhaps the most amusing here.