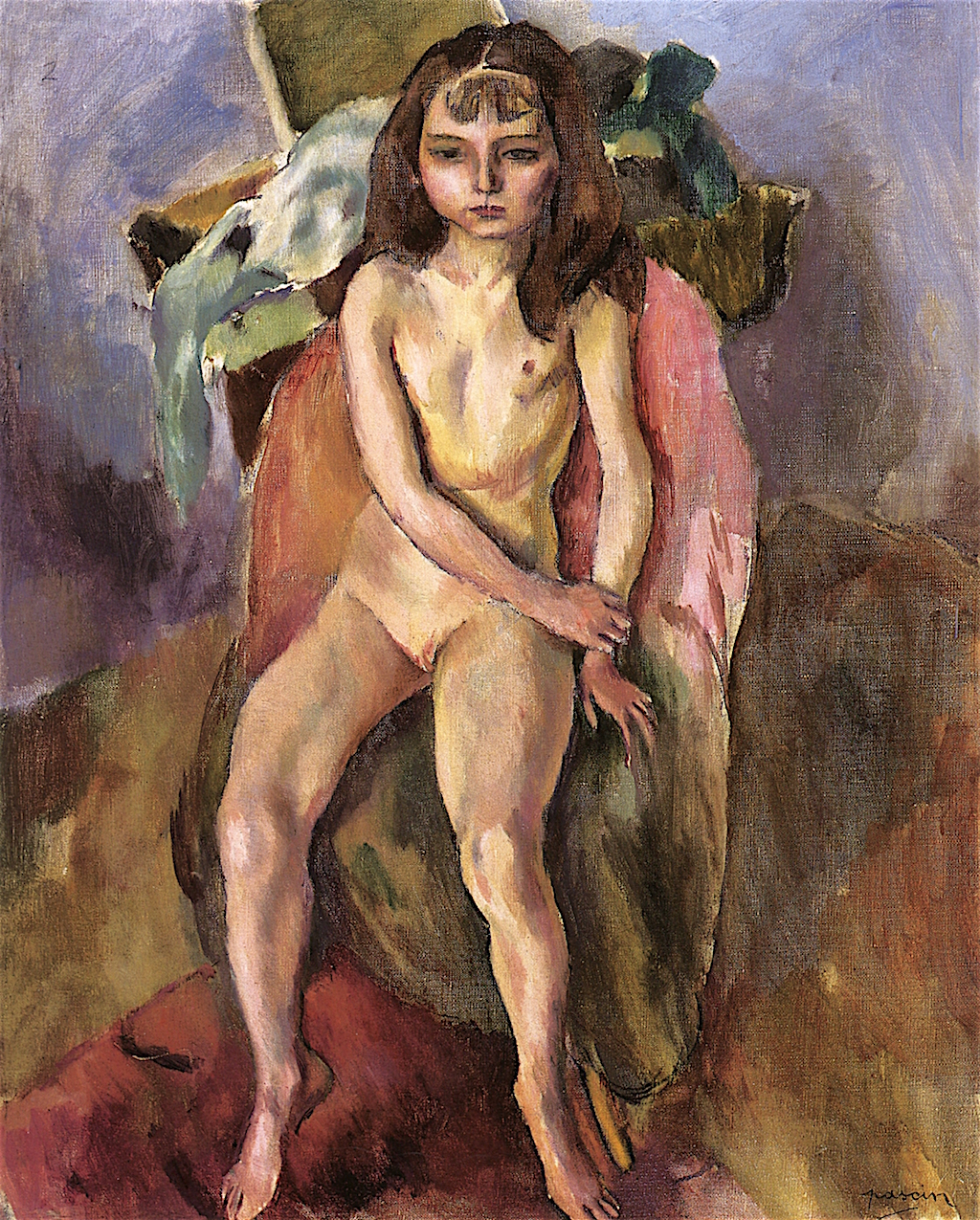 Pascin (to be pronounced phonetically, Paskinn) loved women, all women, from young nymphets to worn-out prostitutes, and they feature prominently in his works. His art mixed with his sex life, indeed he got the nickname “the Caliph” and was reputed to have 367 models: his wife Hermine, his mistress Lucy, as well as one concubine for each day of the year. He was also called “prince des trois monts” (prince of the three mounts) in reference to the two locations Montparnasse and Montmartre in Paris, then to Mont de Vénus (mons Veneris). 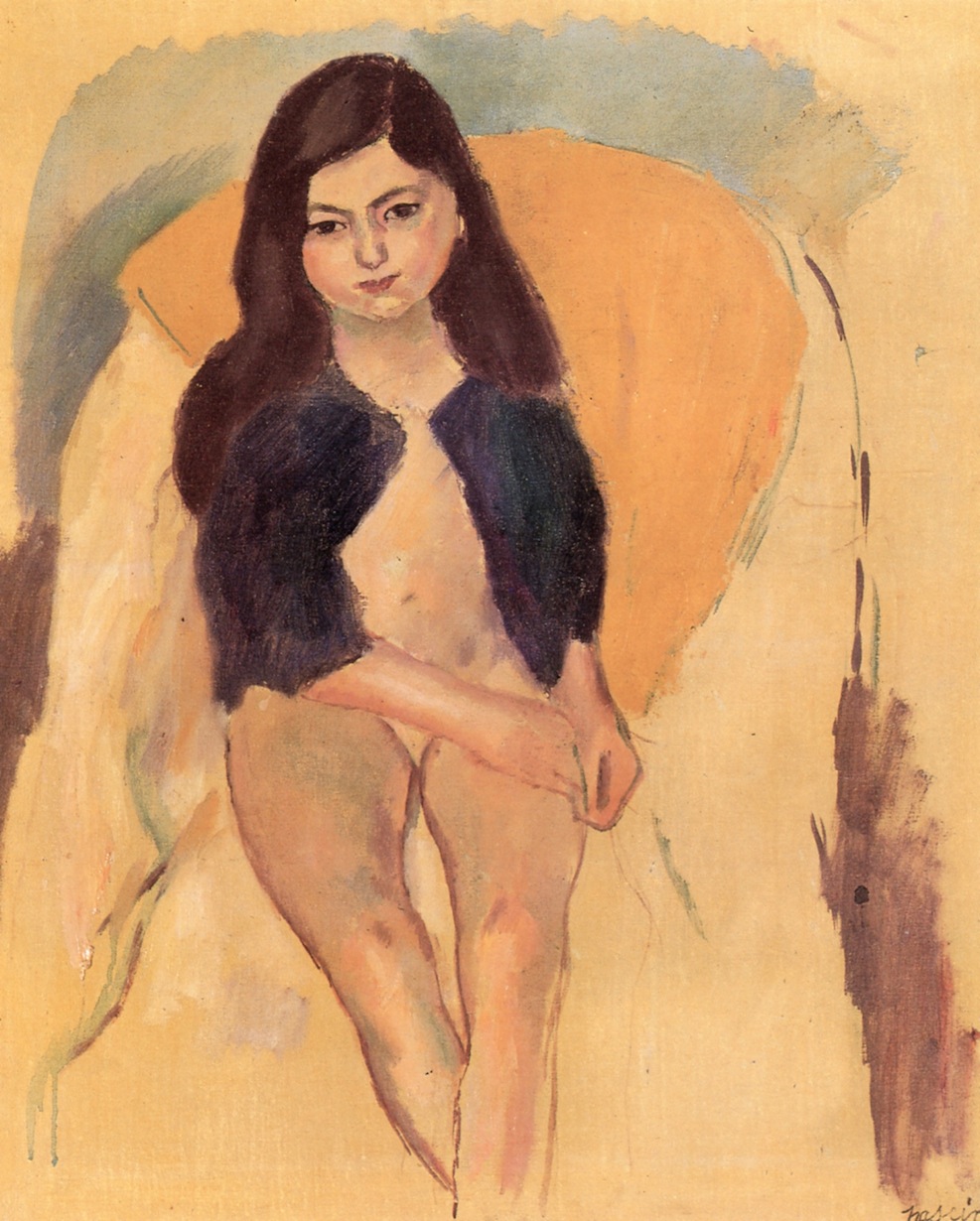 Although he earned a lot of money from his paintings and caricatures, he was always in a hurry to spend it, holding feasts, paying for drinks all round in bars, and also helping friends in need. He loved the nightlife in slums, befriending the underworld, but also getting involved in brawls.

He was born on March 31, 1885, in Vidin, Bulgaria, and named Julius Mordecai Pincas. His parents, Sofie and Marcus Pincas, were Sephardic Jews. His father, a rich grain trader, behaved as a household tyrant, terrorising his family and abusing his servants, whipping and even raping maids. The young Julius found solace in drawing, and soon got his lasting interest for the female body in Turkish baths, but also by trading to a maid one of his drawings for a view under her skirts. He finally fled from home. 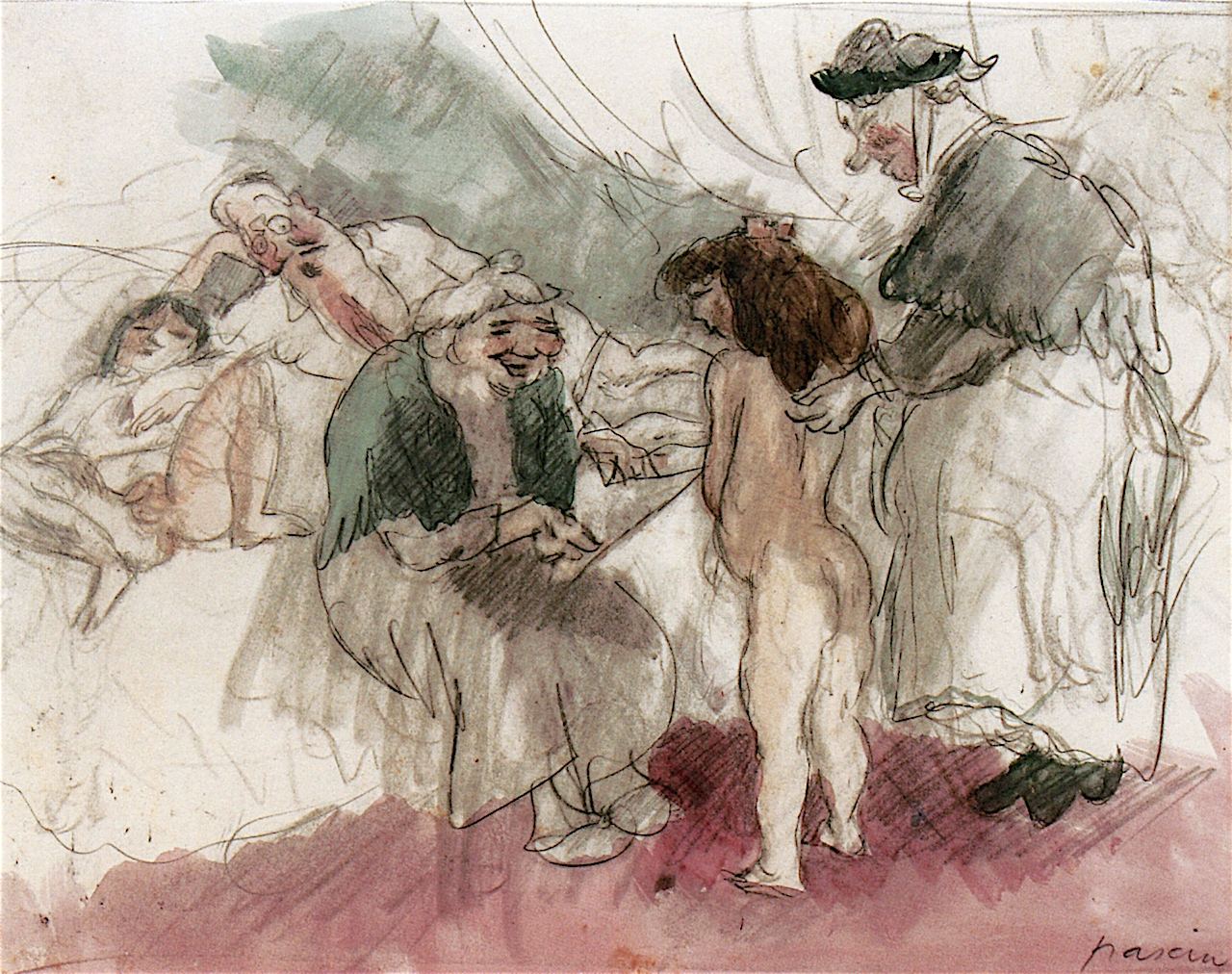 Julius started to draw caricatures, many of them with an explicit sexual content, for Simplicissimus, a satirical magazine published in Munich, the capital of Bavaria, a province that wanted to distinguish itself from stern Prussia. They immediately got a big success, and this activity would bring him a lot of money for the rest of his life. In March 1905, he went to Munich. Disapproving of his work, his father forbade him to use the name Pincas. So he chose the anagram Pascin (pronounced Paskinn). After all, his grandfather had changed the family name from Pinas to Pincas. Although one generally refers to him as Jules Pascin, he signed his works “pascin” with a lowercase “p” and without a first name.

On Christmas Eve 1905, he arrived in Paris. His fame had preceded him, so he was welcomed by a delegation of artists and personalities. In September 1907 he met Hermine David, a young painter, it was love at first sight, and they would remain together for the rest of his life; and she would tolerate his endless sexual adventures. 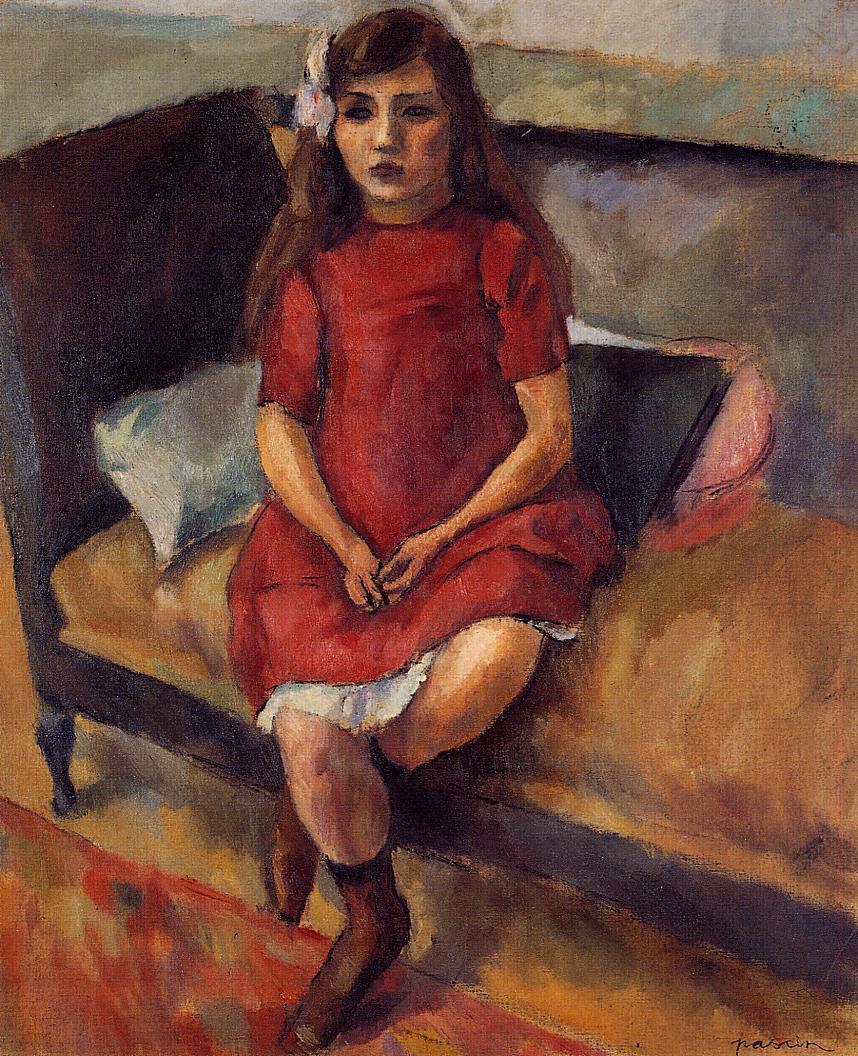 In 1909 he met the 18-year-old Cécile Vidil, who had left home. She changed her first name to Lucy. A beautiful woman, she became a model for artists at the Matisse Academy. The Norwegian painter Per Krohg was there; he fell in love and they would eventually marry and have a son, the artist Guy Krohg. She also sat for Pascin, and probably had an affair with him at that time. She would later become his mistress, while being still married to Krohg. 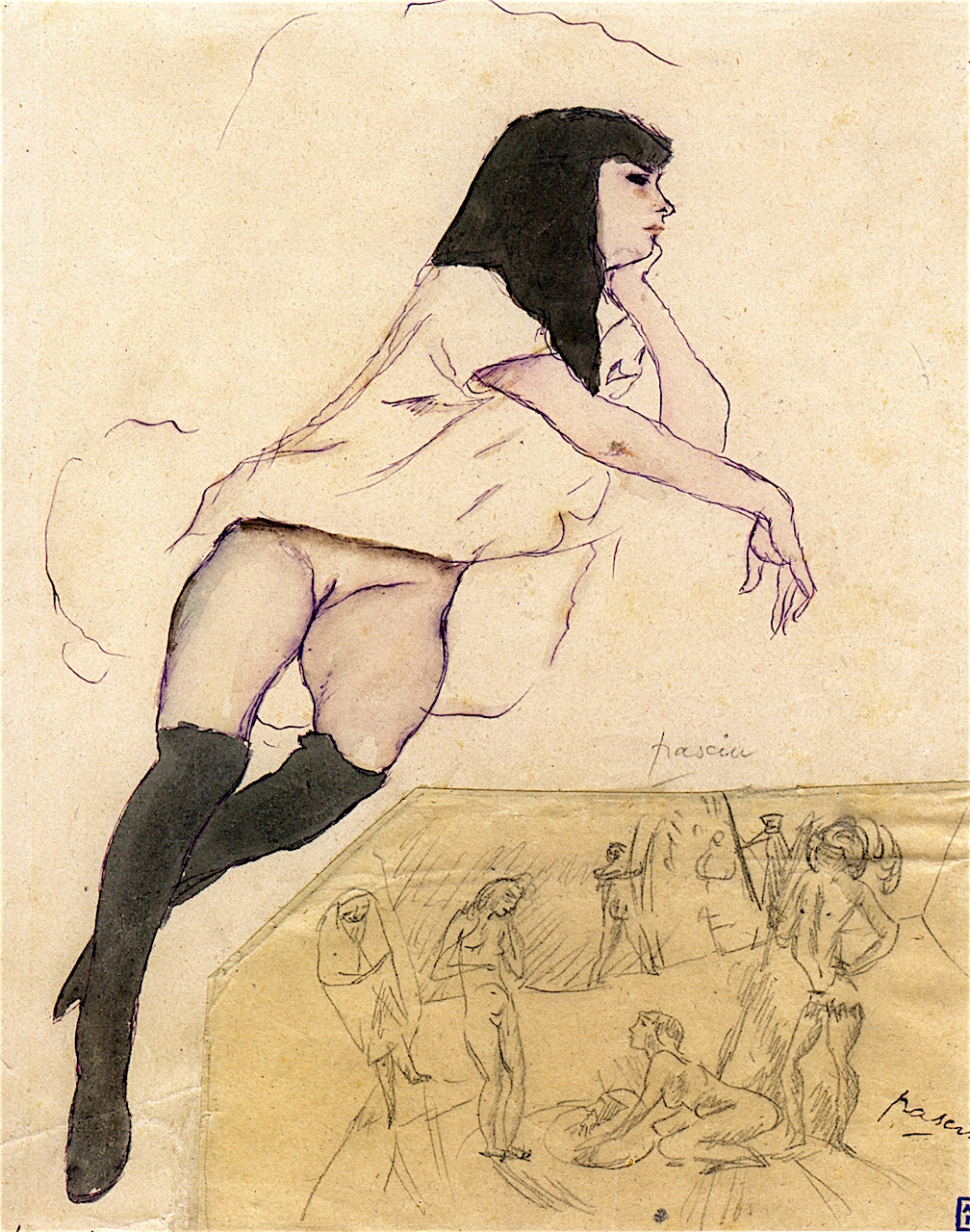 In June 1914, just before the outbreak of World War I, fearing that he would have to serve in the Bulgarian army on the side of Germany, he left for London (via Brussels). In October, he crossed the Atlantic and arrived in New York City, without Hermine, who feared long journeys across the ocean. Although living in the Jewish neighbourhood of Brooklyn, he preferred Harlem, the Black neighbourhood, its free lifestyle suiting him better. Hermine joined him six months later. They travelled a lot, visiting the South. From Florida, Pascin headed to Cuba, but without Hermine. Throughout this period, he made many drawings of street scenes, families, or even landscapes. 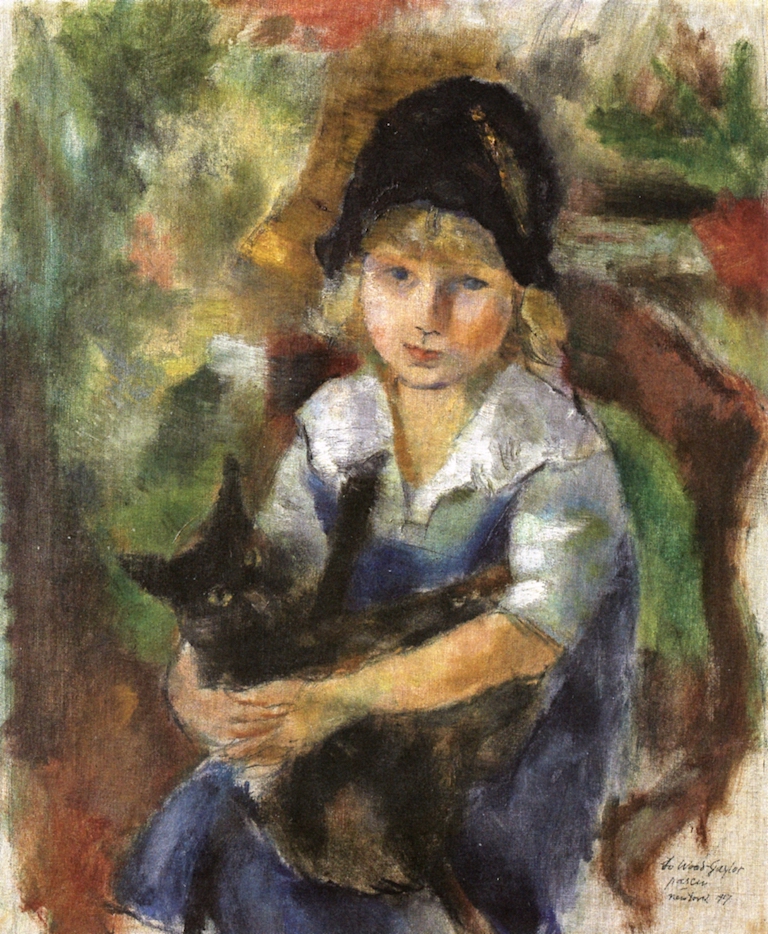 Through their mutual influence, their painting and drawing styles were getting ever closer. So Pascin and Hermine made a moral contract, to which they would abide scrupulously: Hermine would make landscapes, and Pascin the human figure. They married on September 25, 1918, in New York City, probably to please Hermine. He obtained US citizenship on September 20, 1918.

They returned then to France. Pascin fell in love with Lucy, who was still with Krohg and had a son from him. She became his mistress, and soon quite openly. They loved each other until his death. He was practically bigamous, and his two partners, Hermine and Lucy, became friends. 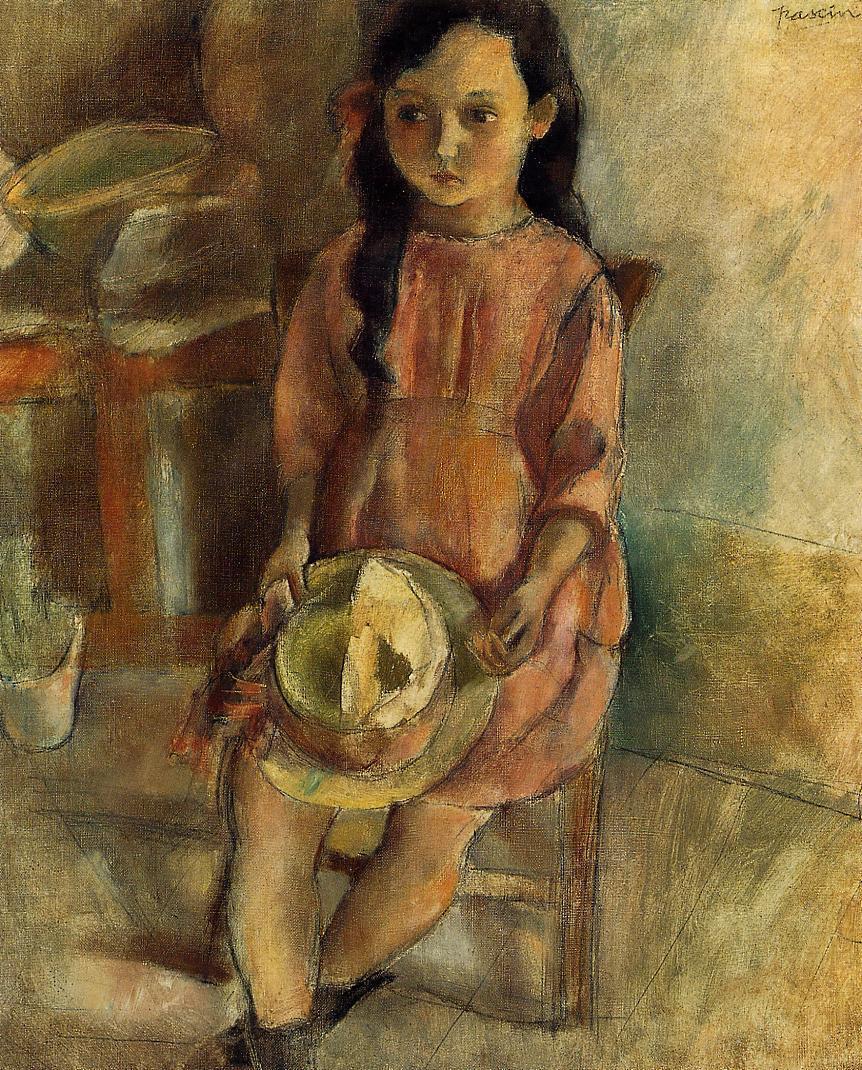 Throughout the 1920s, Pascin travelled in various countries, sometimes with Lucy. Otherwise he lived in Paris in his paint workshop, which was never furnished properly as a home. A Martinican woman, Julie Luce, settled with her daughter Simone at his place. She would serve as model, nurse and household keeper for the painter, and she would even be the one able to calm him during his violent fits after binge drinking: “Tu nous fait chier, Pascin! Maintenant va dormir.” (You make us shit, Pascin! Now go to sleep.)

He disliked luxury women, he often chose street girls or young dancers as models, and paid them well. And there was always food and drink available for them. Sometimes models would stay in the evening for a feast. Although he sold his paintings at a high price, they always found buyers in a short time, and often collectors would come at his place to find that nothing was available. 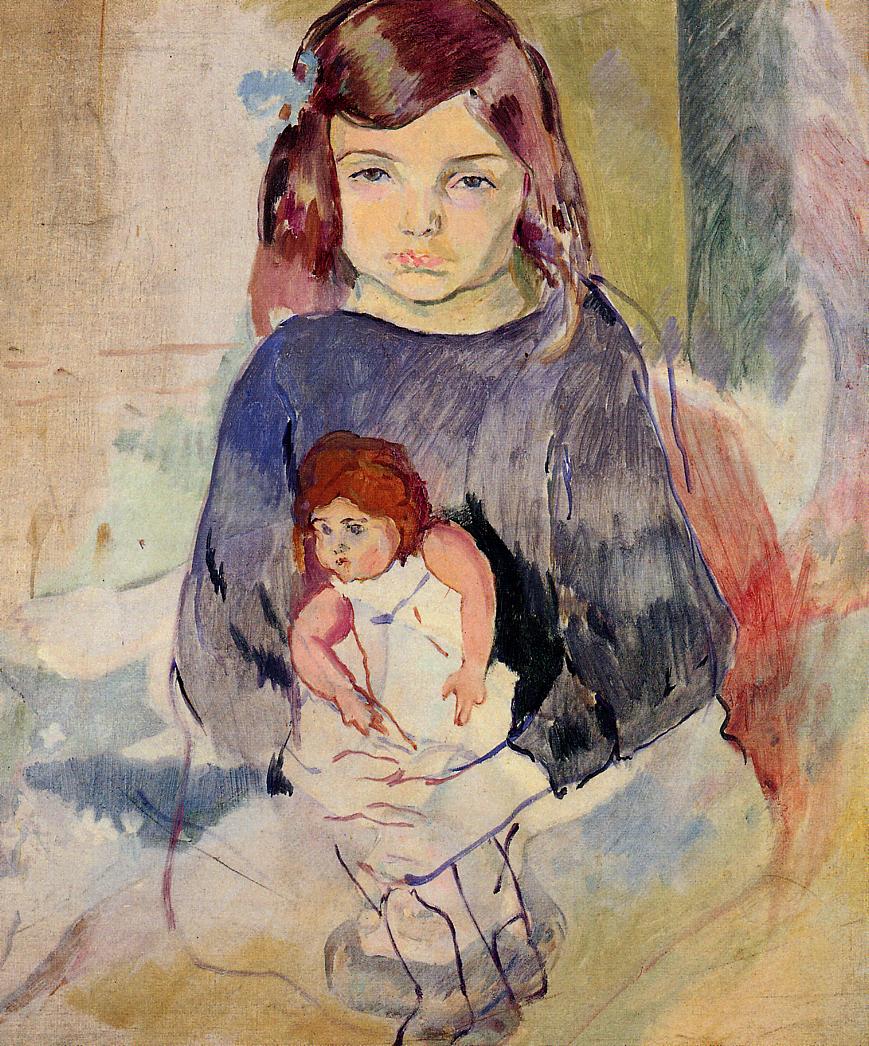 His nights were often spent in feasts, at his place, in restaurants or cabarets, sometimes involving 200 guests. Every Friday, he would lock himself in his workshop to make a painting to the taste of art dealers, which would sell at a high price. So on Saturday he would spend the money earned in this way. 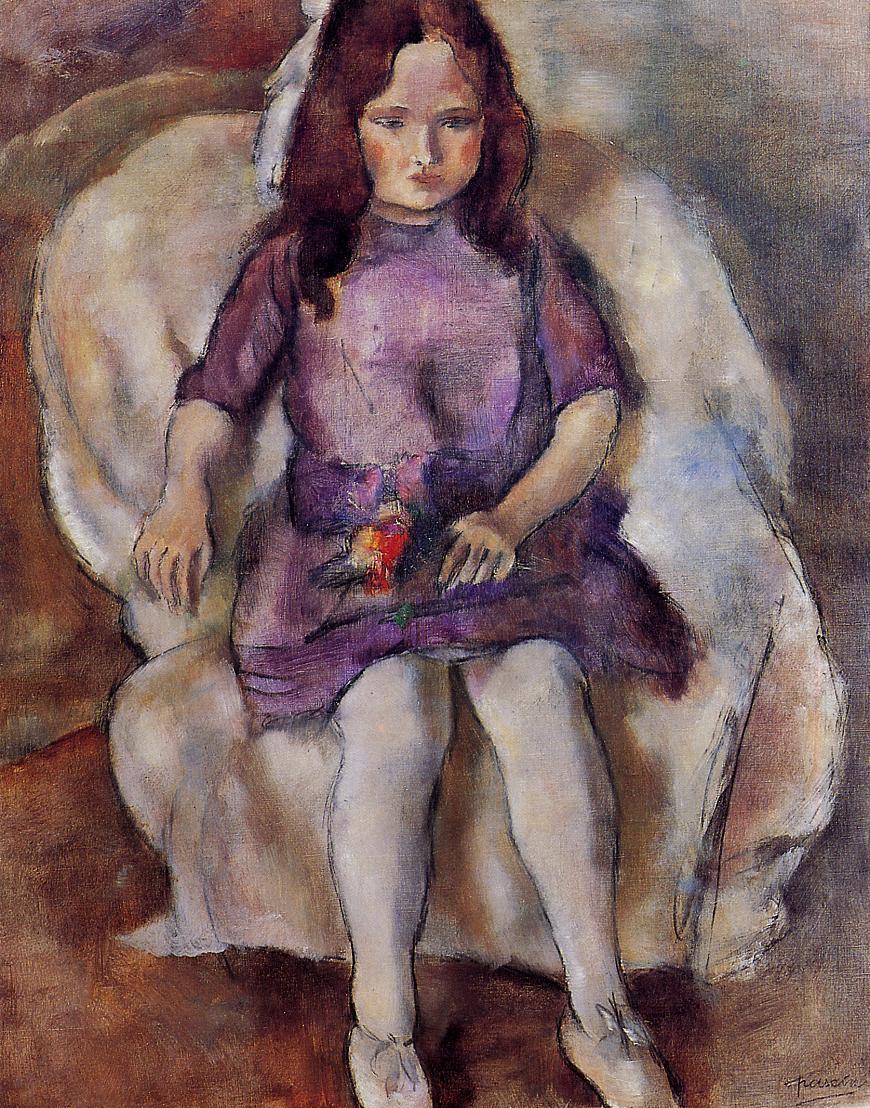 Throughout his career, his style had evolved from the harsh lines of the caricatures of the Bavarian period to soft compositions with fancy colours. They became ever more nacreous and misty, in a style that suited his rich patrons. Under contract with the Bernheim-Jeune brothers, paid to paint what they liked, he increasingly felt that he was always doing the same type of picture. He felt disgusted with himself, like a procurer of painting, paid to sell women who sat for him. This was far from the ambitions of his youth. 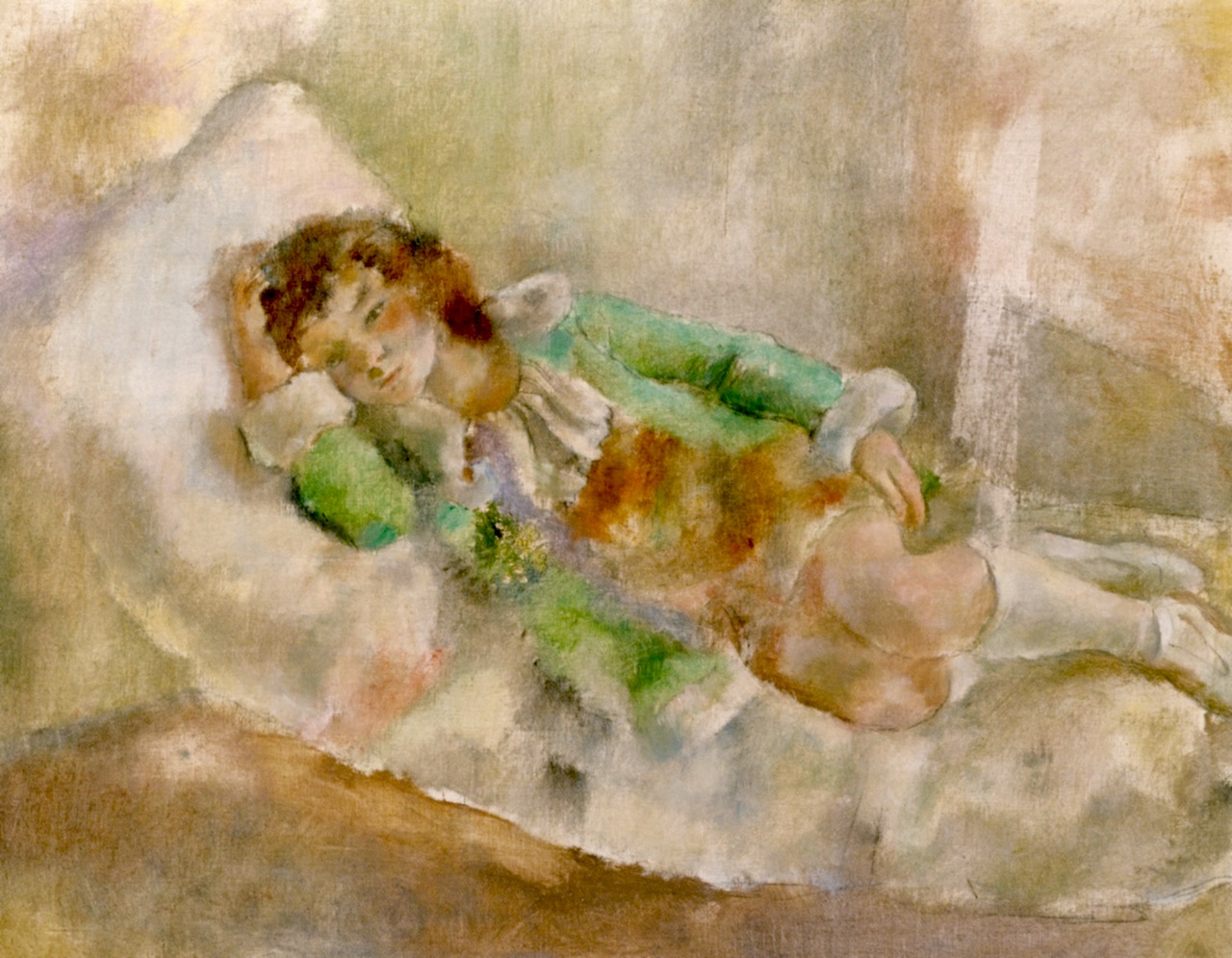 His body worn out by his continuous excesses, his spirit weakened by the trials of life and love, and having the feeling of being sold out as an artist, on the second night of June 1930 he slit both his wrists, wrote with his blood a farewell to Lucy on the wall, and as death was not coming fast enough, he hung himself to the latch of his door. Lucy found his body three days later. She always blamed herself for not having been there on the eve of his suicide, as she might have prevented it.

In his will, Pascin had bequeathed all his property to Hermine and Lucy, equally. On the morning of June 7, a procession of one thousand marchers accompanied his coffin through the streets of Montmartre, towards the cemetery of Saint-Ouen. At the head were Lucy, accompanied by Per Krohg, followed by Julie Luce and Simone comforting Hermine. Then all his friends, artists, writers and publishers, art traders, dozens of models, bar and restaurant managers, and the little people of slums. At the end was a neat old tramp, sent as delegate by the beggars of Boulevard de Clichy. 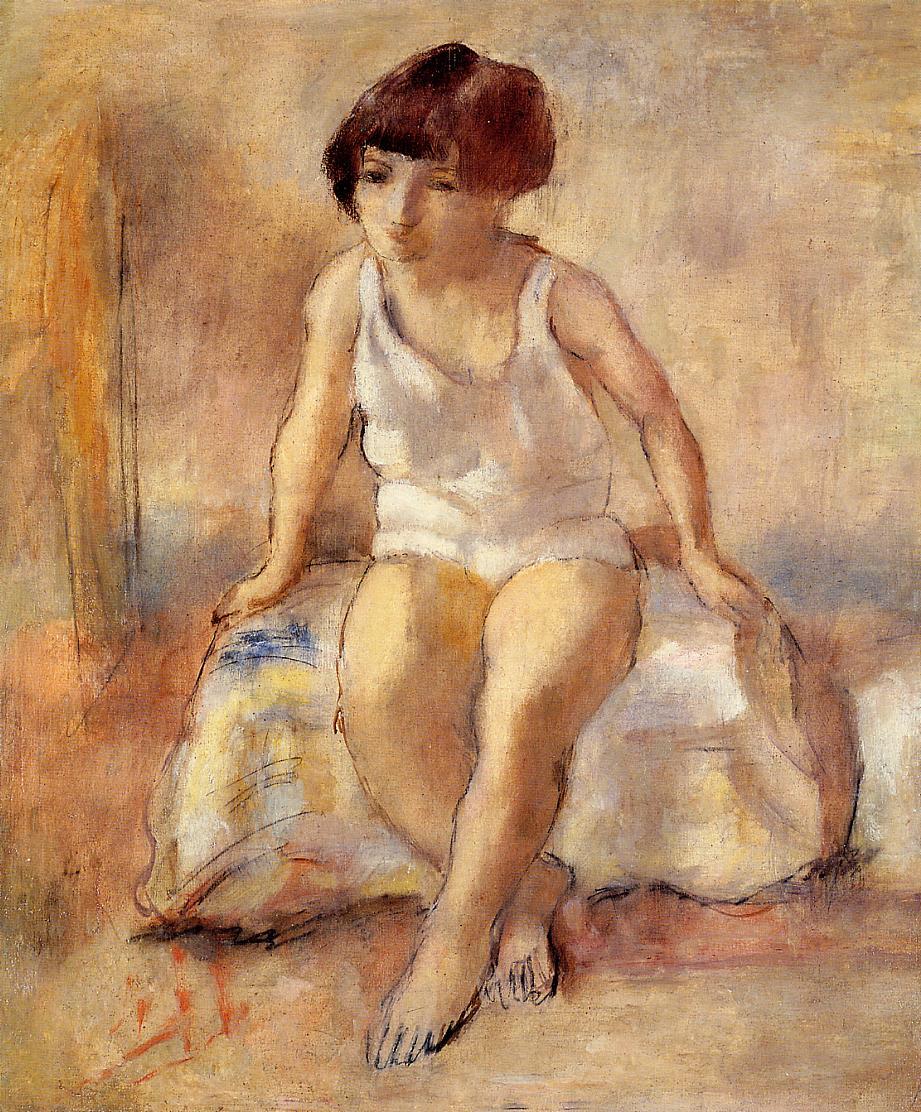 Lucy’s marriage with Krohg was dissolved in 1934. Hermine and Lucy never married again, keeping the memory of Pascin. The writer Pierre Mac Orlan summarised Pascin’s personality by the words:

The freest man in the world who belonged to this world only through imaginary links. 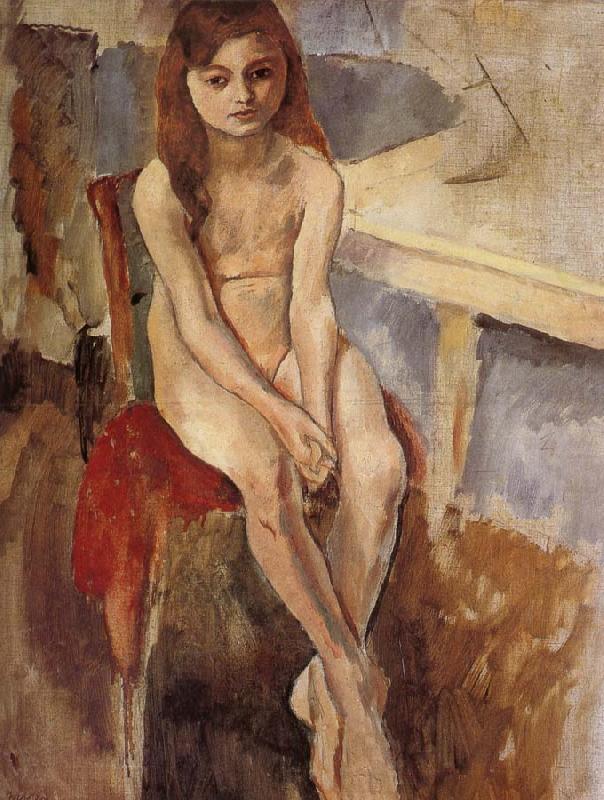 Sources: My article is mainly based on the following book:

I completed it with details from the French and English Wikipedia pages.

All above images, except the last one, come from The Athenaeum. Of all art sites, this one gives the greatest number of works by Pascin, and in the highest quality.

The last image above comes from a site trading imitations of known paintings by contemporary Chinese artists. I have not found in any reputable art site a confirmation of the authorship of this painting by Pascin.

I end by including an image from Wikimedia Commons, which gives an unusual example of the portrayal of nude women by Pascin: 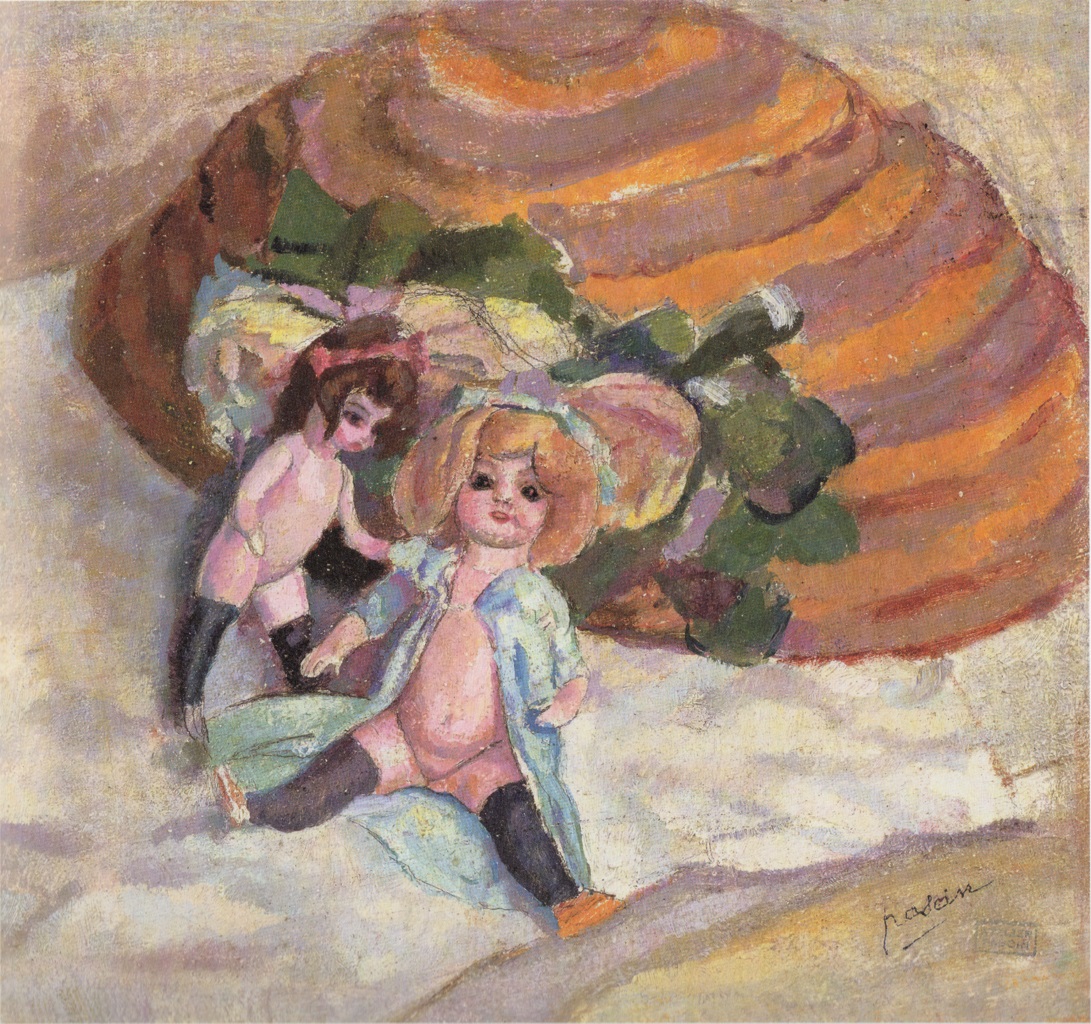