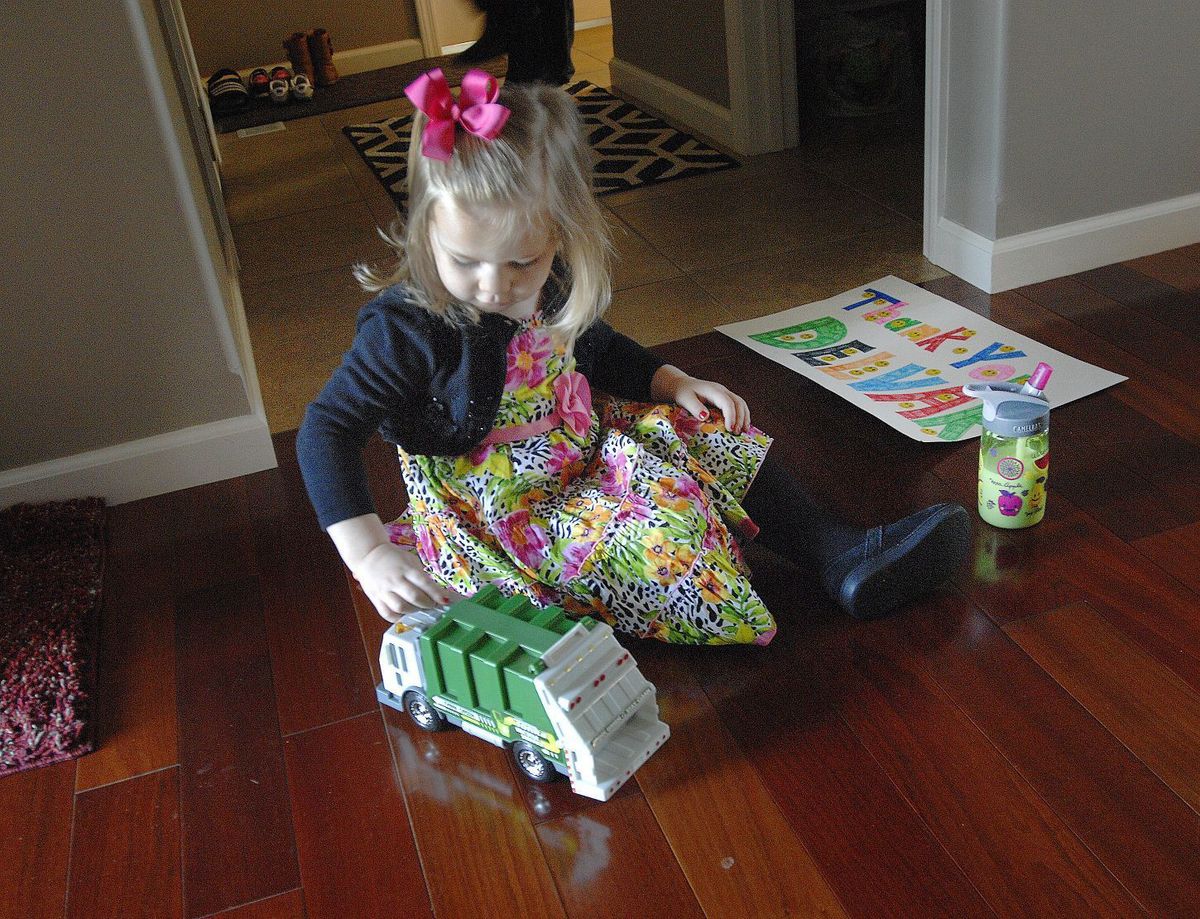 This is an updated version of a post published in Agapeta on April 25, 2016.

What lies in a little girl’s mind? What are her interests? Which role models does she hold? Sometimes she can choose a quite unusual one, and this leads to unexpected consequences.

Brooklyn Andracke, a little girl born on April 7, 2013, lives in Bloomington, Illinois, USA. When she was aged two, she became fascinated with the garbage collector who was coming every Thursday. At first, she was waving from the window as the garbage truck passed by. Then Brooklyn, her mother Traci and little brother Ty moved outside to wave. And when they missed the truck, Traci Andracke would drive the kids around the neighborhood to find the truck so Brooklyn could wave. And the driver always made a point of waving back with a big smile and honking the truck’s horn.

Traci said: “Thursdays are by far her favorite day … garbage day. For about a year now, she has anxiously awaited the garbage truck’s arrival at our house.” She added: “And so we look forward to Thursday mornings, garbage day, all week. Monday morning, she starts asking if it’s garbage day yet.”

When Brooklyn’s third birthday happened to be on Thursday, “garbage day,” she wanted to share part of her big day with him: to give him a birthday cupcake. As his truck came down her street, Brooklyn ran to the corner and her mother waved for the driver to come over. Said Traci:

He pulled over, got out and gave us his BIG smile. Brooklyn was instantly speechless as she handed him the cupcake. I explained to him that he makes our day every Thursday, and we really appreciate the honking and waving, and how special of a day it is for us.
Then … (melt my heart) … he explained that he looks forward to seeing us every Thursday as well. He said that he has a meeting every Thursday morning and always tries to get out of there in a hurry so that he can make sure to see us every week. He said he doesn’t have any kids of his own, but he mentors several children and just loves them. I can’t believe that I never got his name, so for now he will continue to be “our favorite awesome smiley garbage man.”
After he left, we continued onto daycare. Brooklyn was unusually quiet in the backseat. I asked her if she was okay, and she said “Mommy, I’m so happy.”

“I didn’t know I was her idol,” he said. “I just looked forward to seeing this young lady every Thursday. She topped it off last week with a cupcake.”

Traci Andracke made some photographs of the scene, and shared them on Facebook. She also learned the man’s name: Delvar Dopson. 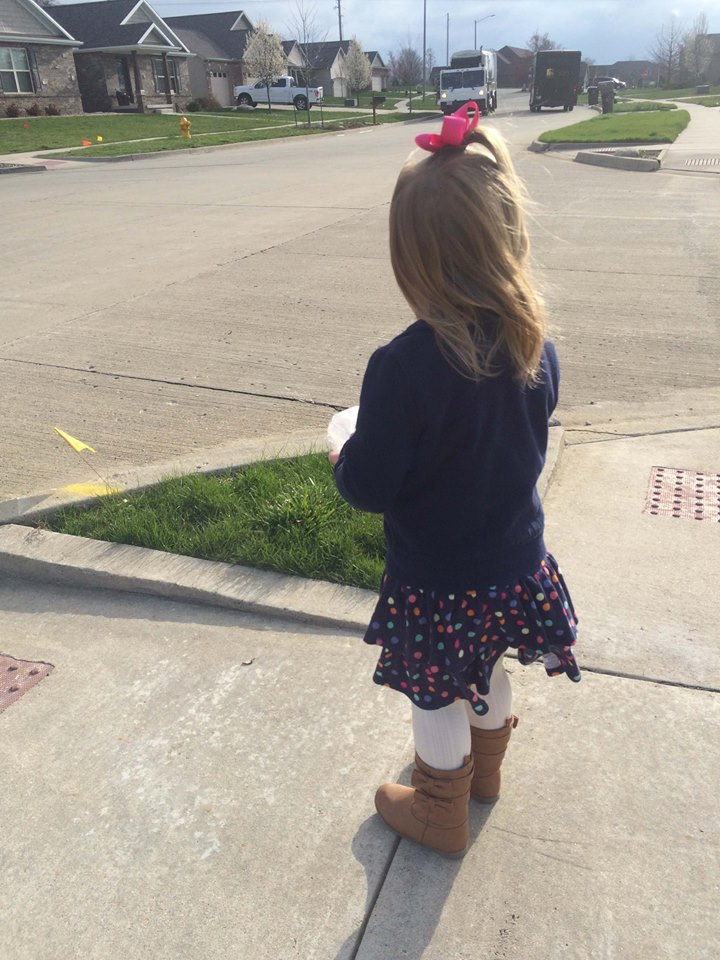 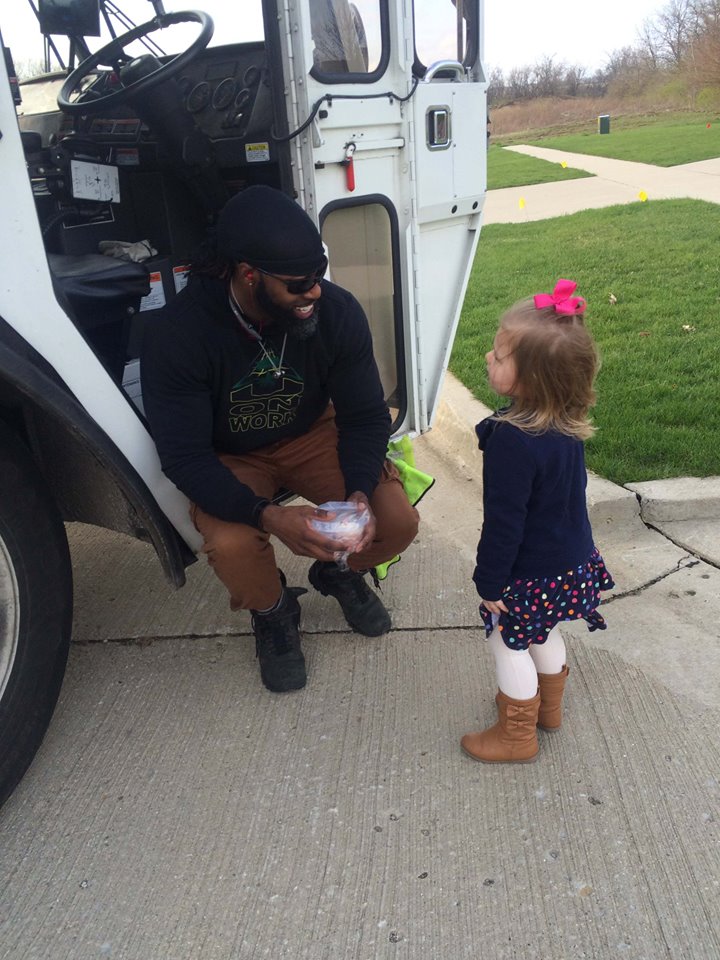 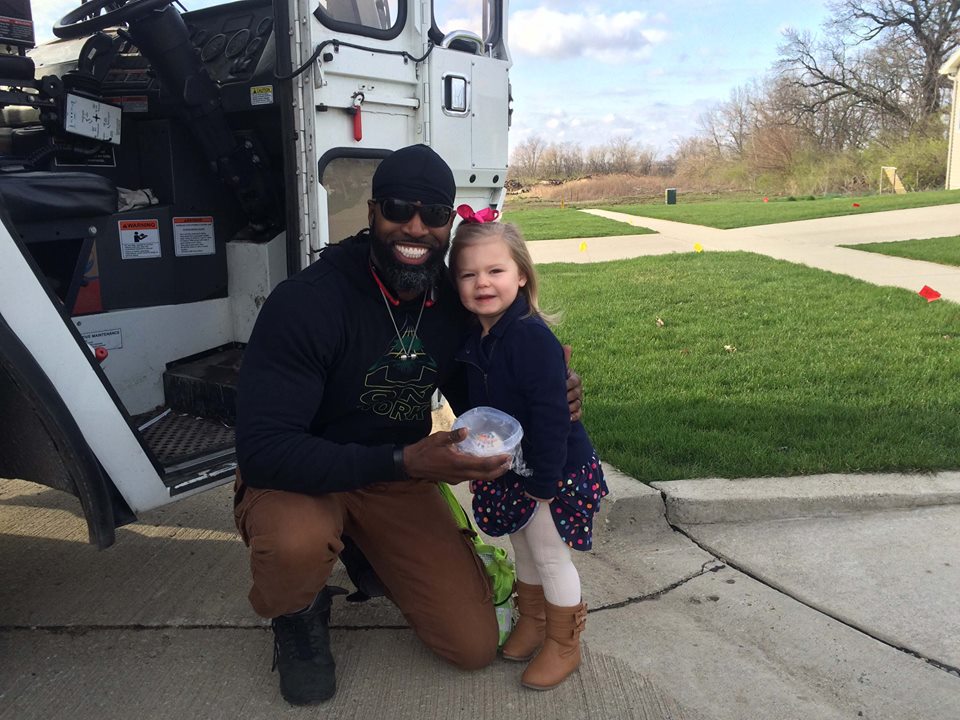 The following Thursday went magic. The local journal Pantagraph was there with a reporter and a photographer. Said Traci:

This morning was garbage day again. The Pantagraph sent a reporter and photographer to our house to cover the exciting morning. As Delvar got to our street, he honked to let us know he was coming. Brooklyn grabbed her sign that she made for him and ran to the corner to greet him. The sign said “THANK YOU DELVAR.” Delvar pulled up to our house and greeted Brooklyn with his usual big smile and big hug. He thanked Brooklyn for the cupcake that she gave him last week and said “Happy Belated Birthday.”
THEN ……… he walked her around to the other side of the truck and pulled out the most amazing, awesome and generous birthday gifts for her. He said he did a little research and knew she liked the movie FROZEN. His wife made this incredible basket full of everything FROZEN, and another full set of FROZEN fun stuff to color, paint and draw with ……… a little girl’s dream!!!! (and yes, at this point I was crying).
[…]
Brooklyn gave Delvar the sign to keep in his truck. He put it in the front window facing out for everyone to see.

The story was shared on Facebook and spread around. Delvar got warm congratulations from colleagues from all over the country and even from abroad, telling him how he made them proud of their job.

Here are some of the Pantagraph photographs. Brooklyn eagerly awaits Delvar’s arrival. 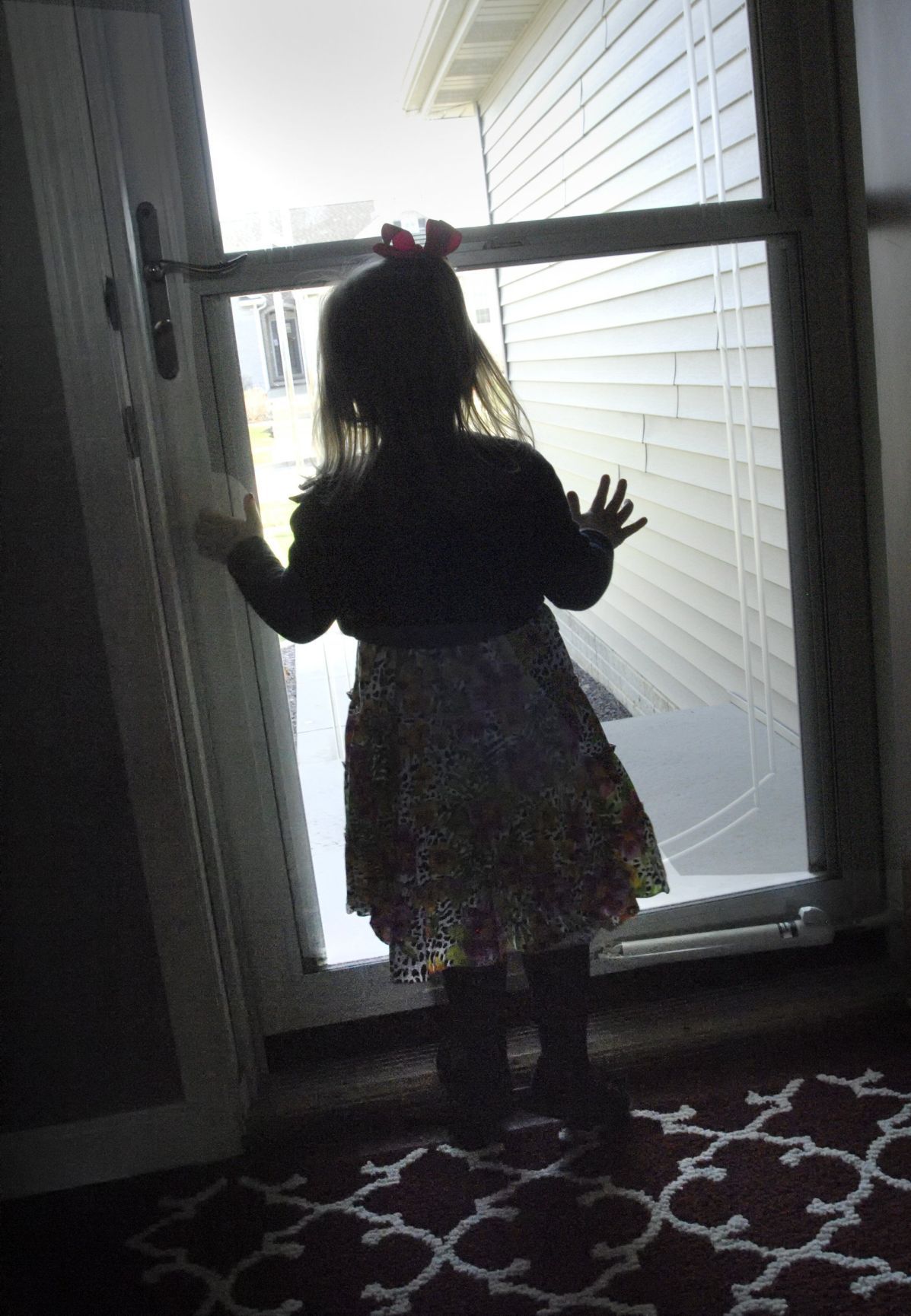 As he comes by, she gets out with her sign for him. 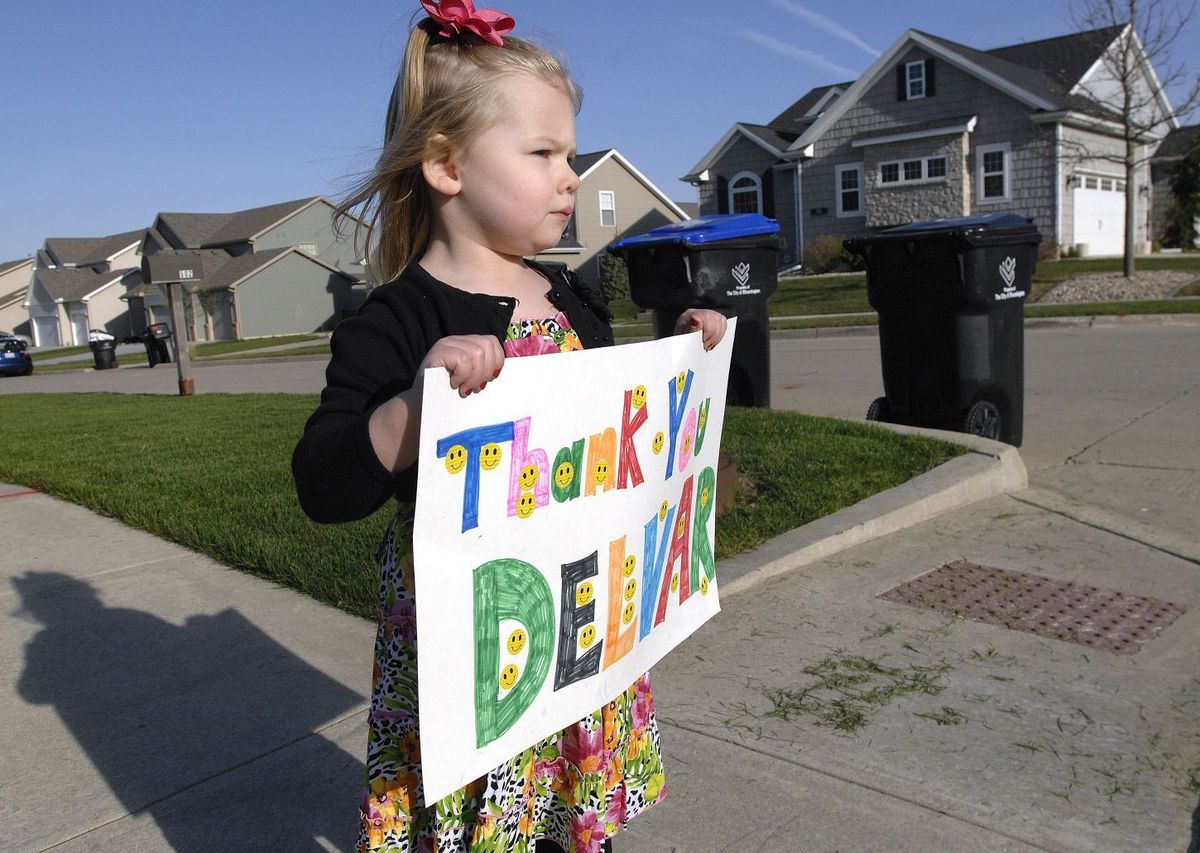 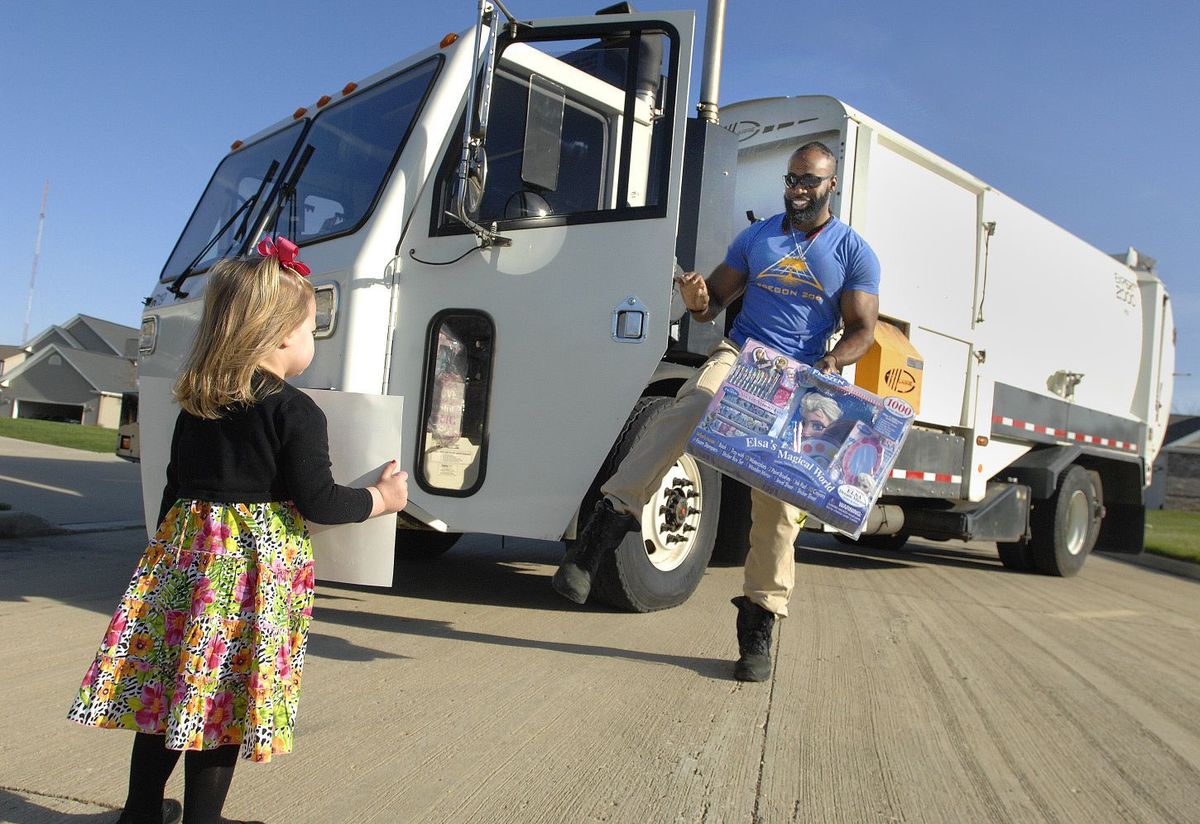 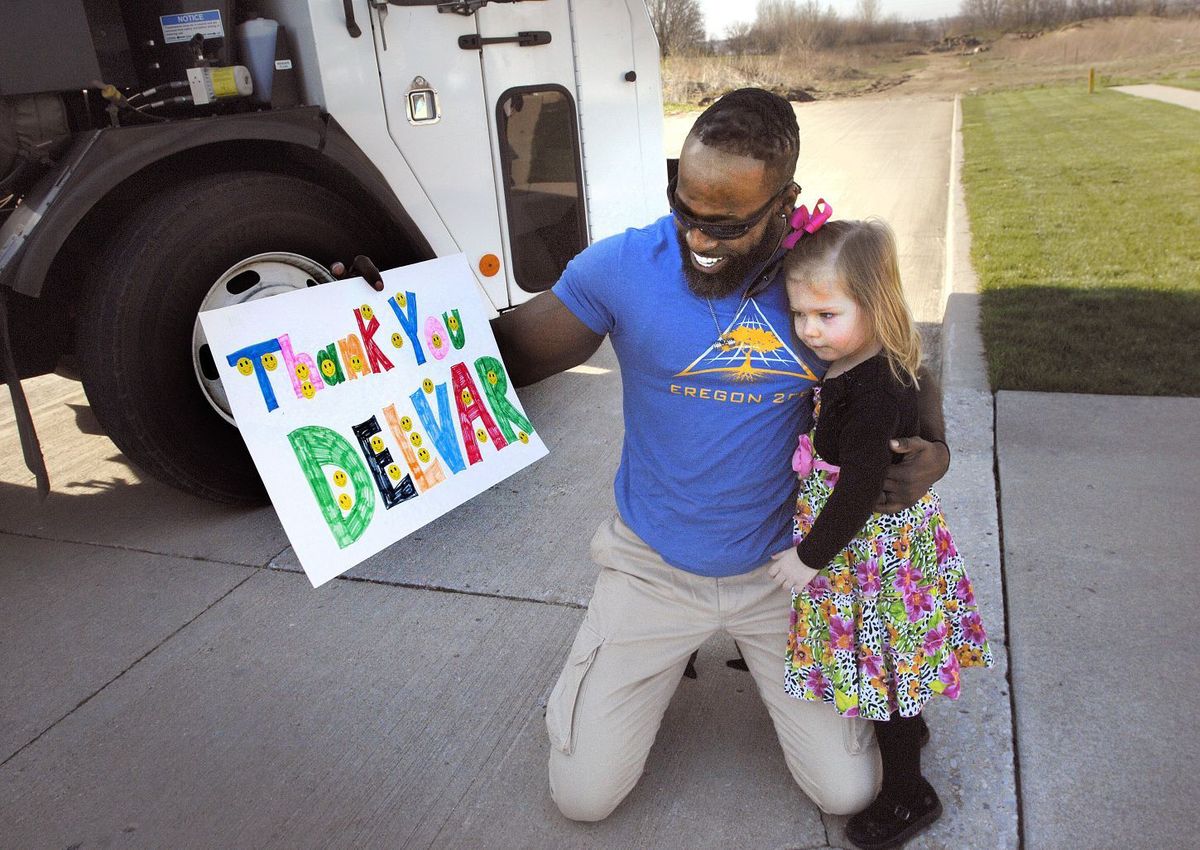 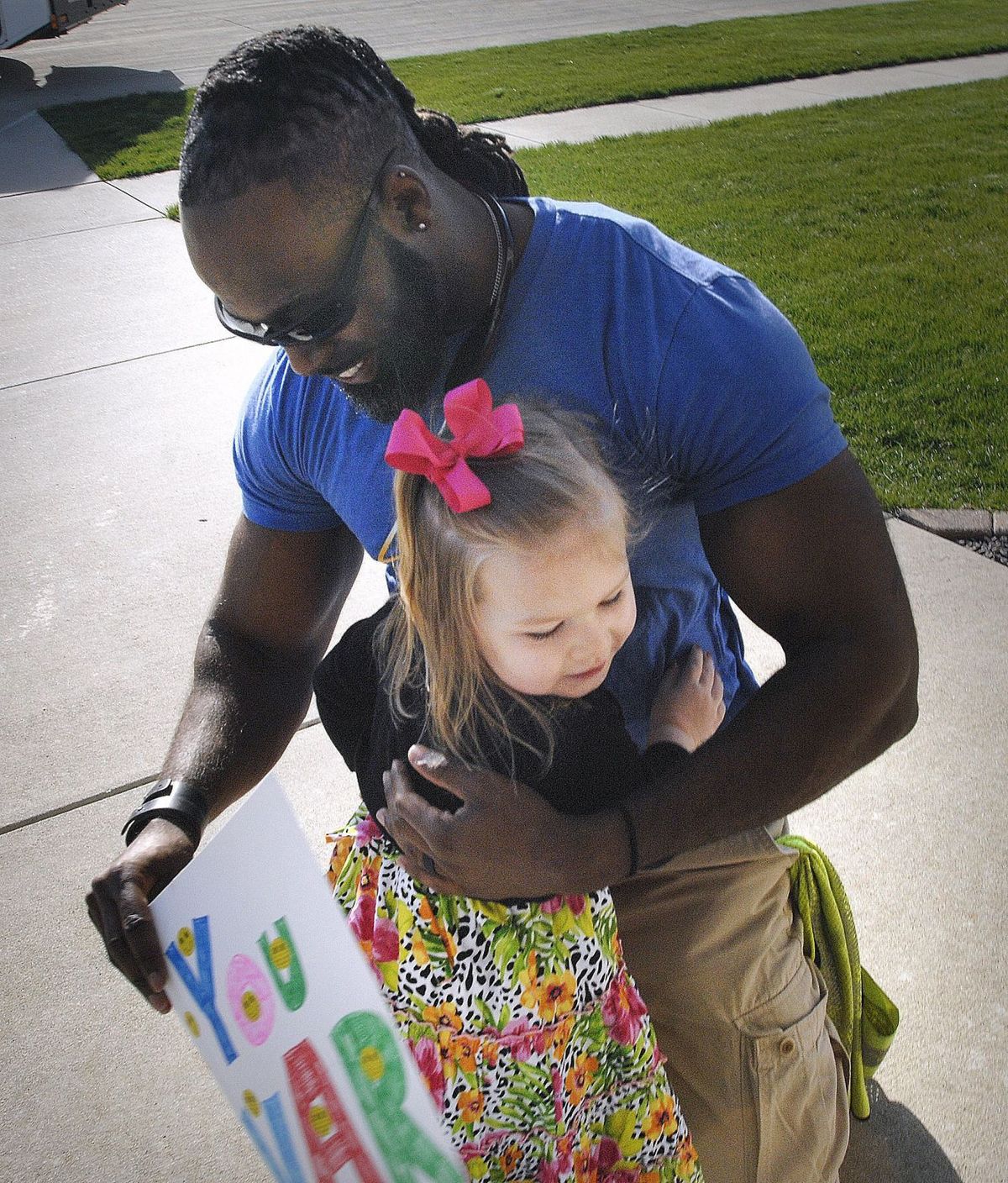 Now, this magical encounter also changed Delvar’s life. Indeed, the story of Brooklyn sharing a cupcake with him on her third birthday on April 7, 2016, became a viral sensation on the internet, and it caught the attention of Nutella, the makers of the chocolate hazelnut spread, which featured Delvar Dopson in a series of YouTube videos.

After noticing the videos, NBC Universal officials invited Delvar and his wife Bonnie to compete on the television game “The Wall” on July 7, 2017. The couple won $399,792.

Then in 2018, after 12 years as a city public works employee, Delvar resigned from his job in order to move with his wife to Los Angeles to pursue new opportunities. He said that in California he would be meeting with major television networks “on some things that are going to be happening in the future.” He said he could not give full details, adding, “The only thing I am allowed to say is it’s going to be in entertainment and also fitness.”

Before departing, he came to Brooklyn’s house to give her and her little brother Ty a farewell with big hugs. 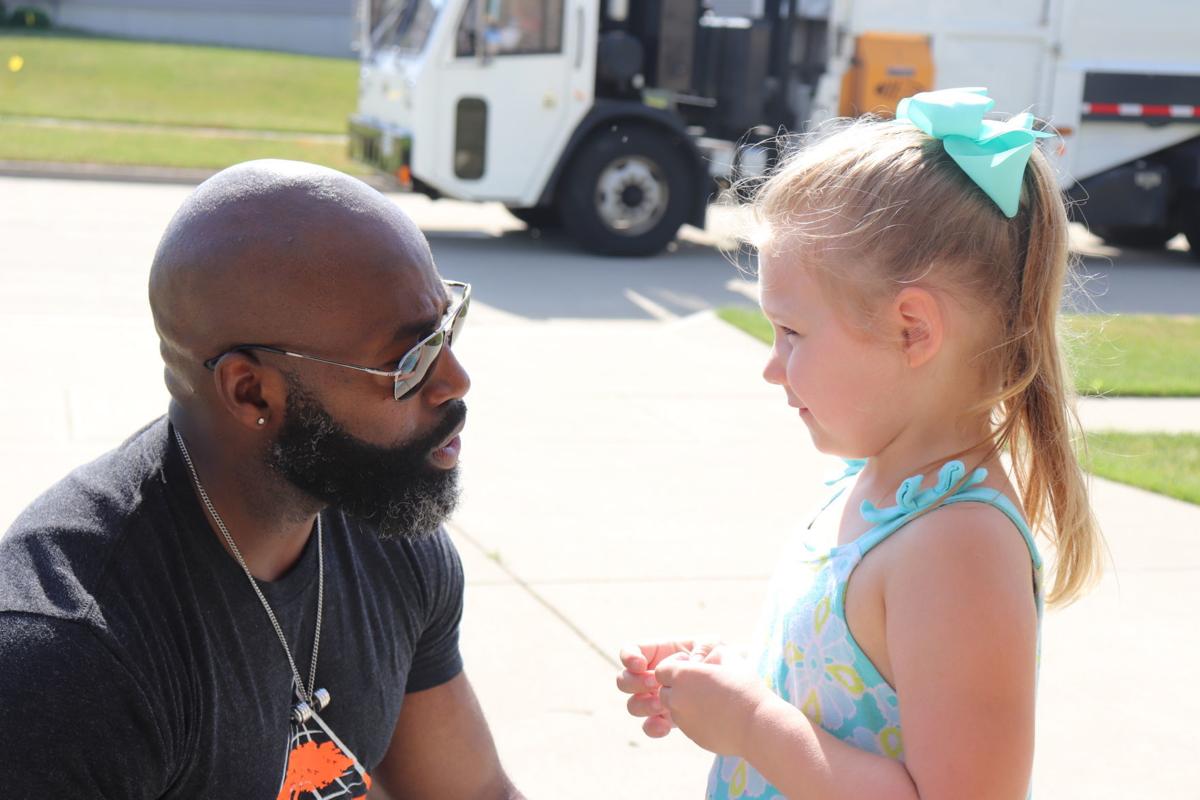 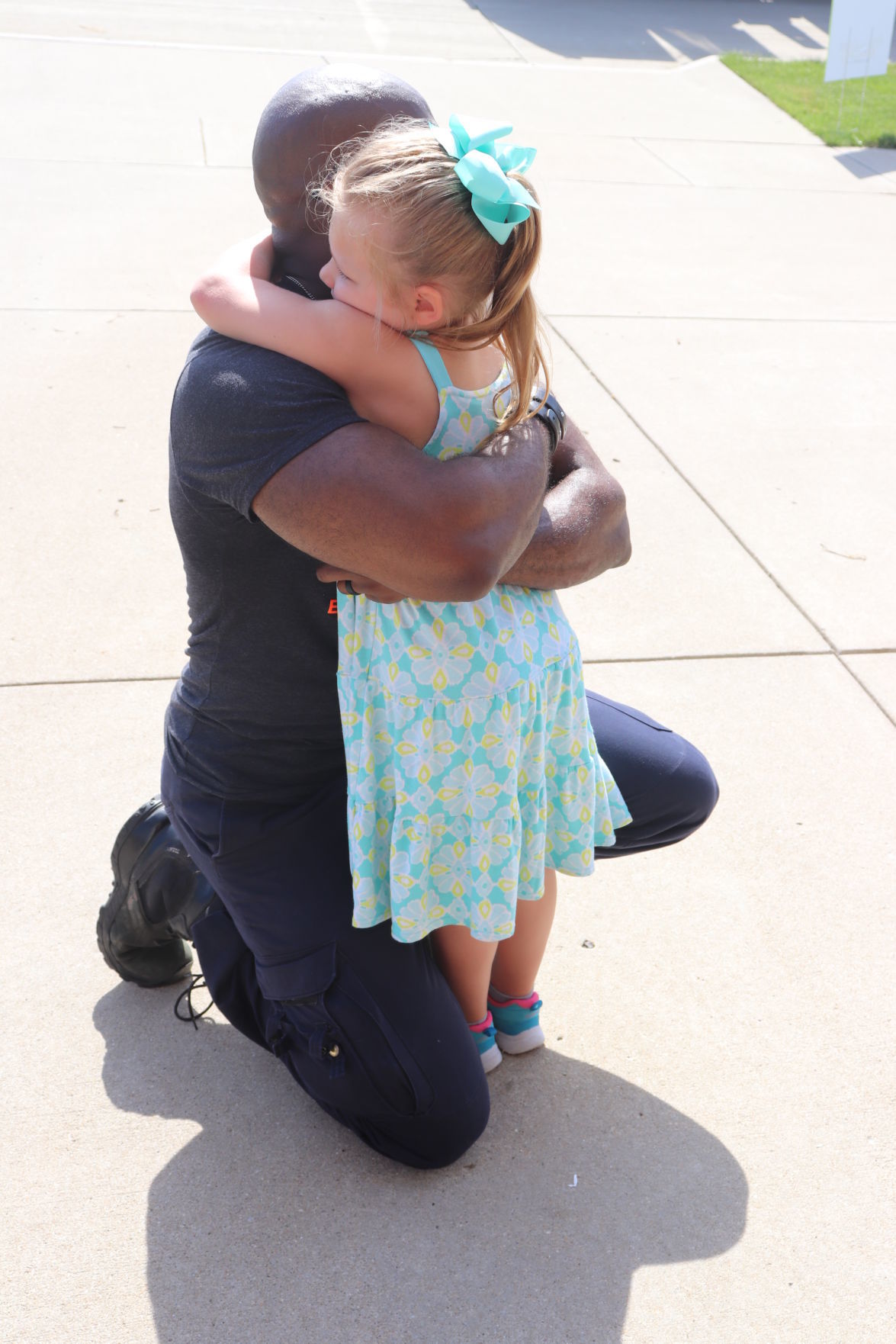 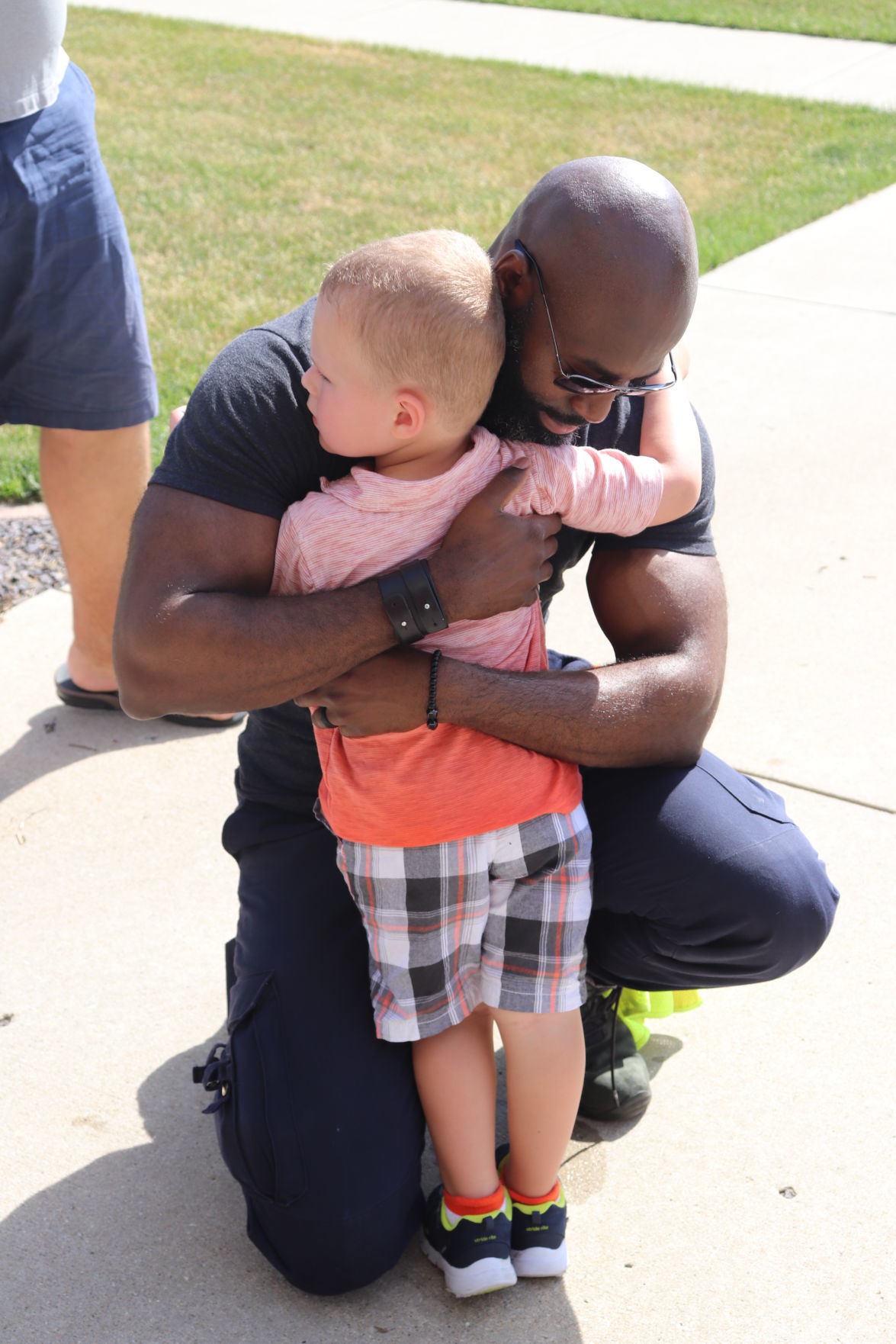 Delvar has a YouTube channel devoted to fitness. His site Eregon 206, devoted to improving lifestyle, contains three videos, one by Inside Edition about his sharing Brooklyn’s third birthday, another one by Nutella presenting it as ‘Spread the Happy,’ and a third showing the performance of his wife Bonnie on the television game “The Wall.”

Sources: Since the site of Pantagraph cannot be viewed in Europe, I have added links to the archived version of its articles.

2 thoughts on “The Garbage Collector: A Little Girl’s Hero”