This is an updated version of a post published with the title “After Many Years” in Agapeta on May 4, 2015.

Auschwitz, the best known of all Nazi death camps, was in fact a kind of vast industrial complex of slave labour and extermination. First arose Auschwitz I, the original camp set up for Polish political prisoners, then came Auschwitz II-Birkenau, where approximately 1 million Jews died, and Auschwitz III-Monowitz, a slave labour camp at the service of the I.G. Farben chemical trust, plus 45 satellite subcamps in the surrounding area, where prisoners worked as slaves for various companies such as Krupp (armament) or Siemens-Schuckert (electrical engineering). Even the dead were made as profitable as possible, by collecting their belongings, clothes, and even their hair and golden teeth.

The Nazi Holocaust is a story of greed, plunder, imperialist conquest and elimination of “unwanted” populations, organized methodically by a powerful bureaucracy, and sanctified by an ideology of racial hatred. The most horrible aspect of it is the organized mass murder of children.

On April 21, 2015, Oskar Gröning, a German man born on June 10, 1921 (thus, approaching age 94), was put on trial at Lüneburg Regional Court as an accessory to murder in 300,000 cases during WWII. As an SS-Unterscharführer, he had been stationed at the Auschwitz-Birkenau concentration camp, where he worked as bookkeeper.

Among the plaintiffs was Judith Kalman, a Jewish Hungarian-born writer living in Montreal, Canada. On April 29 she delivered a poignant testimony, an abridged version of a longer text that she had prepared. It revolves around the fate of her family, especially of her half-sister she never knew: Eva Edit Weinberger, who at age 6 was gassed at Auschwitz in June 1944, ten years before Judith was born. 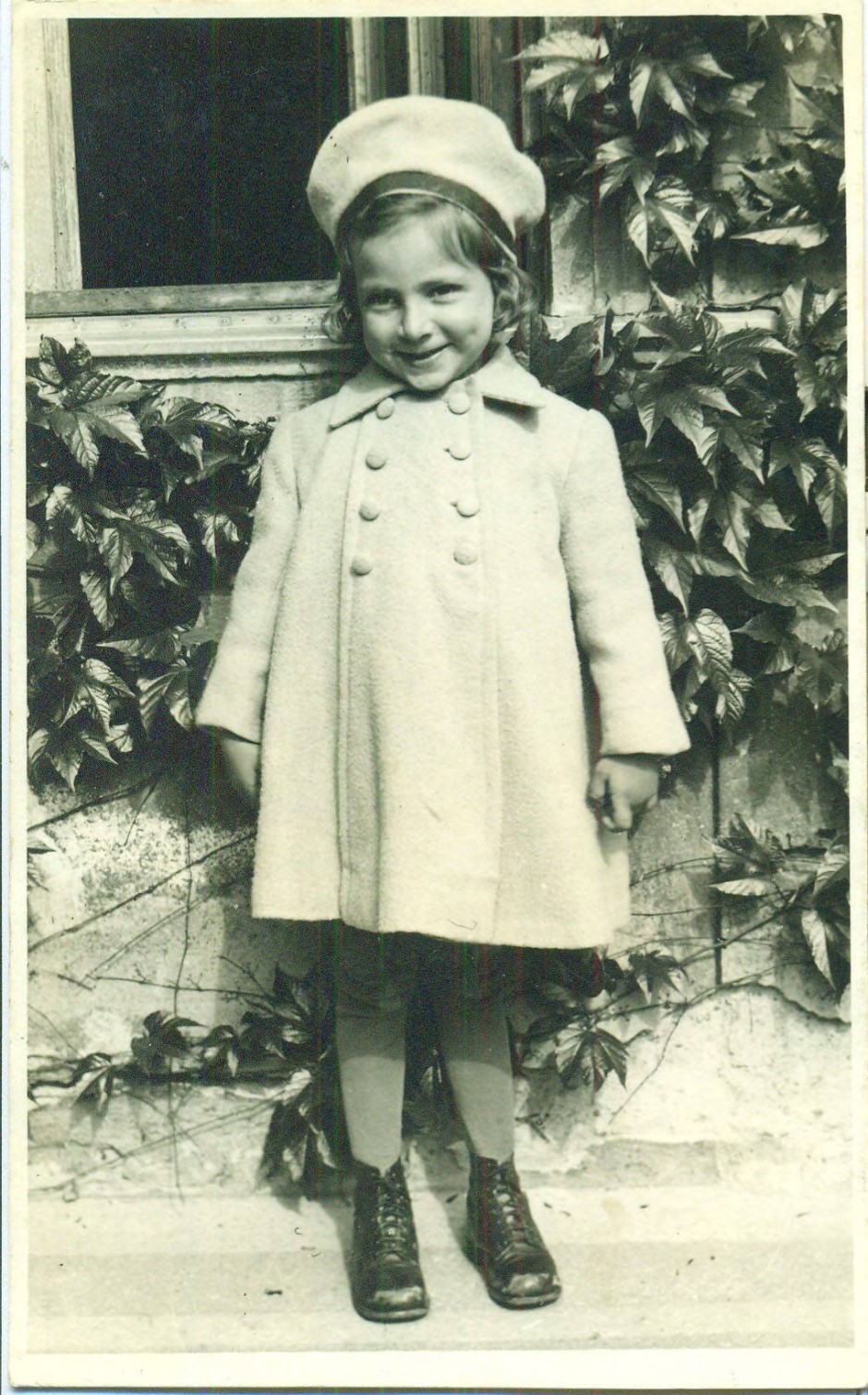 Her father, Gusztav Weinberger, belonged to a family of educated and secular Jewish farmers; they planted tobacco and distilled grain alcohol in a village in northeastern Hungary. Gusztav had married Mancika Mandula in 1937, and their daughter Eva Edit, nicknamed Evike, was born in April 1938. 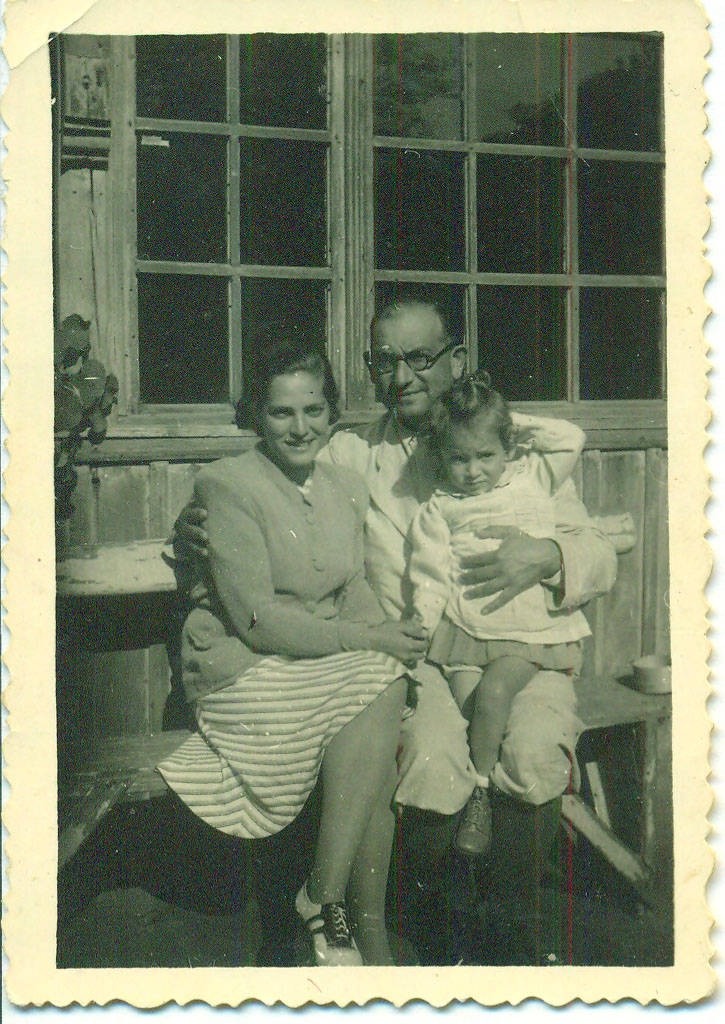 Gusztav and Mancika Weinberger with their daughter Eva

He had two younger brothers, Ferenc and Pal. Hungary was then ruled by the pro-fascist regime of Admiral Horthy. Gusztav and Ferenc were called up for forced labour service for the first time in December 1940, and would remain in this position until November 1944, when German troops and their Hungarian allies fled in front of the advance of the Soviet Army. Judith Kalman writes:

Evike had taught herself to read and write by the age of four. Her letters to my father during his labour service are charmingly printed, the words running together without spaces in between but almost all correctly spelled.

Pal had a wife, Meri, and a daughter, Marika, who was of the same age as Eva. Of Eva, Judith Kalman says:

She looked different from us. Her cousin Marika was considered the prettier of the two with her wide round face similar to her father Pal’s and our grandmother’s, in keeping with the soft curves of the Hungarian ideal. […] Evike as she was known by the family, would have more likely grown into the Western proportions of beauty. Her face was a small oval. In one photo she strikes me as a total stranger, looking like no one but herself, delicate in build, and with large eyes alight with quickness. 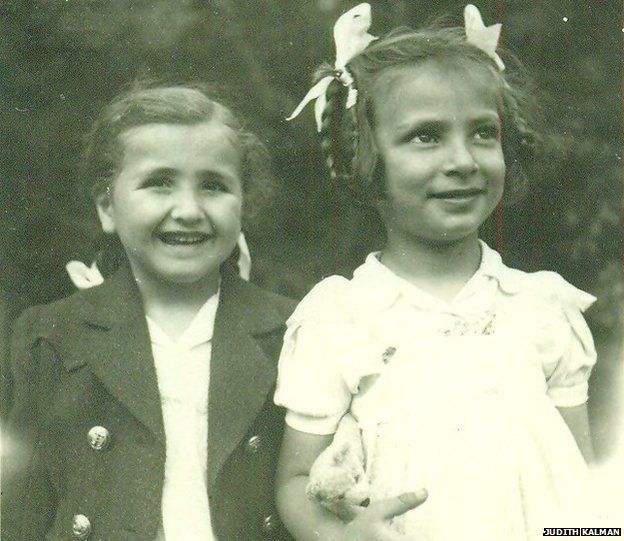 I do not share the Hungarian ideal of beauty. To me Eva is more beautiful, and the profound look of her big eyes captivates me. Judith Kalman continues:

In one photo with her mother, they both smile flirtatiously at the photographer. Our father perhaps? 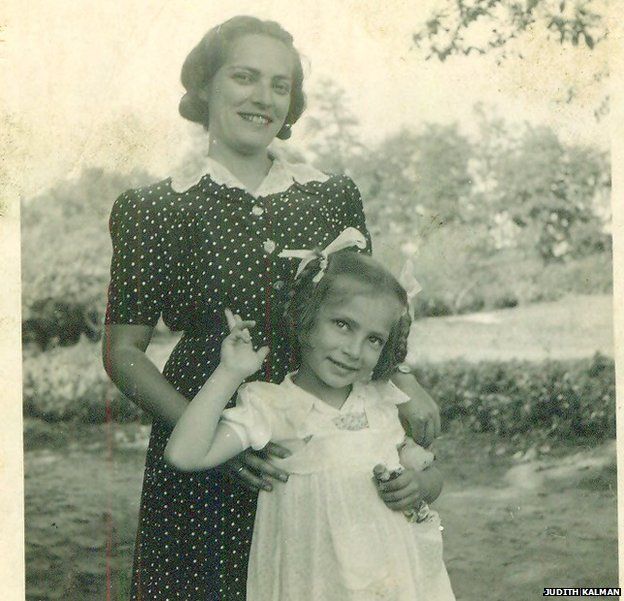 Eva Weinberger with her mother Mancika

The third picture on my desk is not one I would have selected. Herr Walther kindly had it enlarged for me and my sister Elaine. In it Evike looks deeply anxious. Her brows are puckered, and she clings to the teddy bear she holds in every photograph. Perhaps the sun is too harsh on her eyes, but it is hard not to imagine that she is gazing at the future. 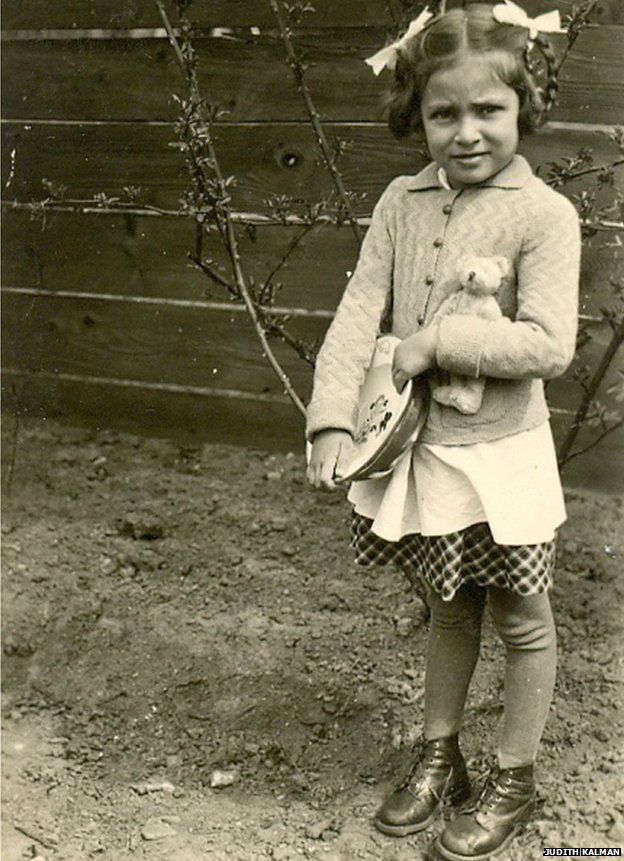 Indeed, Germany occupied Hungary at the end of May 1944. Within 57 days, 438,000 Hungarian Jews were deported to the Auschwitz camp, and among them 320,000 were gassed. While Gusztav and Ferenc, as forced labourers, were spared, their family was raided. One day, thirty-four of their relatives and loved ones were packed into a cattle car bound for Auschwitz. Among them were Eva, her mother Mancika, Gusztav’s and Ferenc’s brother Pal, his wife Meri and their daughter Marika, and their parents Kalman and Ilona Weinberger.

In Auschwitz, only healthy young adults were allowed to survive as slave labourers. Children, elderly people, the sick and disabled were immediately sent to the gas chambers. This was the fate of Eva and Marika, as well as of their grandparents Kalman and Ilona Weinberger. Those who were not gassed died of exhaustion, or during the “death march” towards Germany at the end of 1944, when the Nazis tried to empty the camp because of advancing Soviet forces, who liberated its last inmates on January 27, 1945. 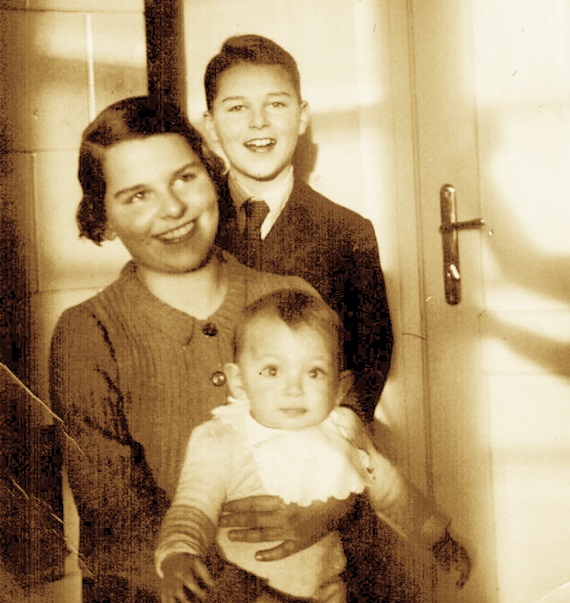 Zsuzsa Rochlitz, a cousin of Gusztav, then aged 19, was the only family member caught in that roundup who returned alive after the war. According to Judith, she told that “throughout that hideous journey she never once saw Mancika Mandula Weinberger falter in her reassurance of her six-year-old daughter Evike. Over and over she consoled her calmly.” Zsuzsa herself said to her, “I never met a woman who better epitomized sensitive, intelligent, and respectful mothering than your father’s wife Mancika as she calmed her darling child during that dreadful journey.” Judith adds:

I look again at Herr Walther’s enlargement of the photograph of Evike. She is trying to smile, even as her eyes and brows pull together anxiously. Her lovely high forehead is deeply furrowed. It’s hard for me to look into her face. Each fine new hair in the fringe spilling out of her gathered braids attests to a teeming abundance of the life within her. The silky promise of each strand is as painful to contemplate as the image of this little girl stripped naked, enfolded by the naked flesh that gave birth to her, as together they slide to the floor of the devil’s own bathhouse.

Ferenc went through the westwards “death march” of slave labourers organized by the retreating Nazis, and died in the Flossenburg concentration camp on November 9, 1944. On the other hand Gusztav escaped from forced labour service, and on November 10, 1944, he arrived at the family estate. He found that locals had taken over the family house, and his personal belongings had been thrown out into the street. All that remained from his beloved ones, letters and photos, were lying in the mud in front of his home. He picked up as many as he could stuff into his pockets.

After the war, Gusztav started a new life. He married Anna Swarcz in June 1946, and they had two daughters, Elaine and Eva Judit, born in 1947 and 1954 respectively. The family settled in Budapest. Gusztav abandoned his German-sounding Jewish surname Weinberger, and took his late father’s given name Kalman, which sounded typically Magyar.

Gustav and Anna Kalman with daughters Judith and Elaine (1963)

After the failed 1956 revolution, the family emigrated to the West, settling in Canada. They lived in Montreal, where Gusztav eventually died in 1990, leaving a wife, two daughters, and four grandchildren.

Throughout these years, the ghosts of the dead haunted the living. Many holocaust survivors experience feelings of injustice, and even guilt, at the idea that others died while they did not. In particular Judith had to explain herself why she lived and why her half-sister Eva died.

As a child I formed a strange myth to explain the baffling circumstances of my existence. There must have been something wrong about the old, beautiful way of life that my father extolled in his stories of the past. […] The clan had been sophisticated and good. Good. Yet, if so, asked the child-skeptic born to him for life in a different world, why were they all wiped out? A child raised to believe in a beneficent God, but above all, because of her father’s carefully wrought narratives, in a causality that gave shape and meaning to life. Surely, surely something must not have been right with that world for it to have been so brutally eclipsed.

I came up with an answer that makes sense only to a child. For some reason, my sister Elaine and I had to be born. If we were meant to be, then it followed that Evike and her world were not. It was that simple. I could imagine no circumstance which would have allowed all three of us life. My father, a committed family man, would never have divorced Mancika to marry Anna, a younger woman. Nor would he have wished to, even had his path crossed with Anna’s in an alternate universe.

On July 8, 2015, Judith Kalman made a final statement for the trial. On July 15, the Lüneburg Regional Court gave its verdict: Oskar Gröning was found guilty of facilitating mass murder and sentenced to four years’ imprisonment. Following a number of unsuccessful appeals against the prison sentence, Gröning died in hospital on March 9, 2018, before he had begun his sentence.

References and sources: I relied on the website of Judith Kalman, in particular the long testimony prepared to give at Gröning’s trial, “Nazi War-Time Trial Testimony.” Time and translation constraints required her to prepare an abridged version to present in court, see “Court Transcript.”

The two sepia photographs, of Zsuzsa Rochlitz with Peter and Eva and of Gustav and Anna Kalman with their two daughters, come from Judith Kalman’s website; I converted their format from PNG to JPEG. The three big photographs, of Eva at age 4, of Gusztav and Mancika with Eva, and of Marika and Eva with their grandparents, come from the article “Ein Leben, aus dem Tod geboren,” Frankfurter Allgemeine Zeitung, May 6, 2015. The three other photographs, of Marika and Eva, of Eva with her mother, and of Eva looking anxious, come from the article “Oskar Groening trial: Loss of family I never knew,” BBC, April 29, 2015.