It was 40 years ago on the 5th of July that the Belgian painter and drawer of comics Paul Cuvelier died. He painted and sketched mainly women and girl nudes as well as in comics, but not comics in the humorous sense. There is some confusion about the proper terminology here so maybe it is better to say he produced graphic novels or engaged in graphic storytelling. But for the sake of convenience, I will mostly use the term comics, especially since Paul Cuvelier had a difficult relationship with that medium.
This post is in English, but is about a Belgian from the French-speaking part of Belgium, Wallonia. In French the term for graphic storytelling is ‘bande dessinée’, which Google translates as ‘cartoon’. So that offers no help. ‘Bande’ translates as ‘strip’ into Dutch (my native language), which is in fact the general term in Dutch for graphic storytelling. Thus it is a ‘strip’ of drawings, telling a story, with the text in balloons or underneath the drawing, serving as subtitles.

It was sometime in my puberty that I discovered Paul Cuvelier, first as the artist of a graphic novel series, Corentin, about a boy from Brittany having all kinds of adventures mainly in ‘the Orient’. Around that time I also read a biography about Cuvelier entitled (in Dutch) Corentin en de wegen van het wonderlijke (Corentin and the Paths of the Miraculous) by Philippe Goddin, who was a specialist on Tintin. And I discovered, by the same author, a study titled Jonge Afrodites (Young Aphrodites) about Cuvelier’s other or rather main art, the classical nude. I remember that my mother discovered this book and made a comment about it to me! I replied at the time that ‘it is art!’ And that was the end of the discussion forever. I did not realise back then that I would wish to write about this artist and others who portrayed ‘Young Aphrodites’.

Here is an example of Cuvelier’s work I referred to. 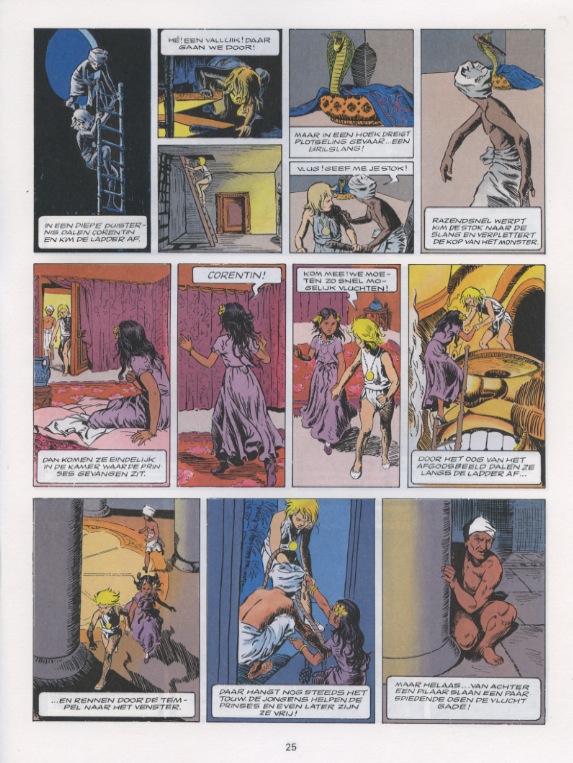 He was born the 22nd of November 1923 in the village Mont-sur-Marchienne, near Charleroi, capital of Wallonia. The first example of one of his girl nudes was probably shown at an exposition in 1977 with the theme: Les Nymphettes. The theme was inspired by the type of the child-woman described by Nabokov, namely Lolita and was titled: Young Aphrodites. Cuvelier wanted to have a second exposition with the same theme, but death kept him from fulfilling it. On the one hand, there was the Nymphet, the Young Aphrodite—according to his biographer Philippe Goddin—chosen as the theme of his last exposition, to show the thematic and artistic context in his work. And on the other hand, Cuvelier had just begun a new artistic adventure. His girl nudes I associate with the Greek goddess of eternal youth, Hebe—but we must never forget also his “comic” heros nor his delightful horses. 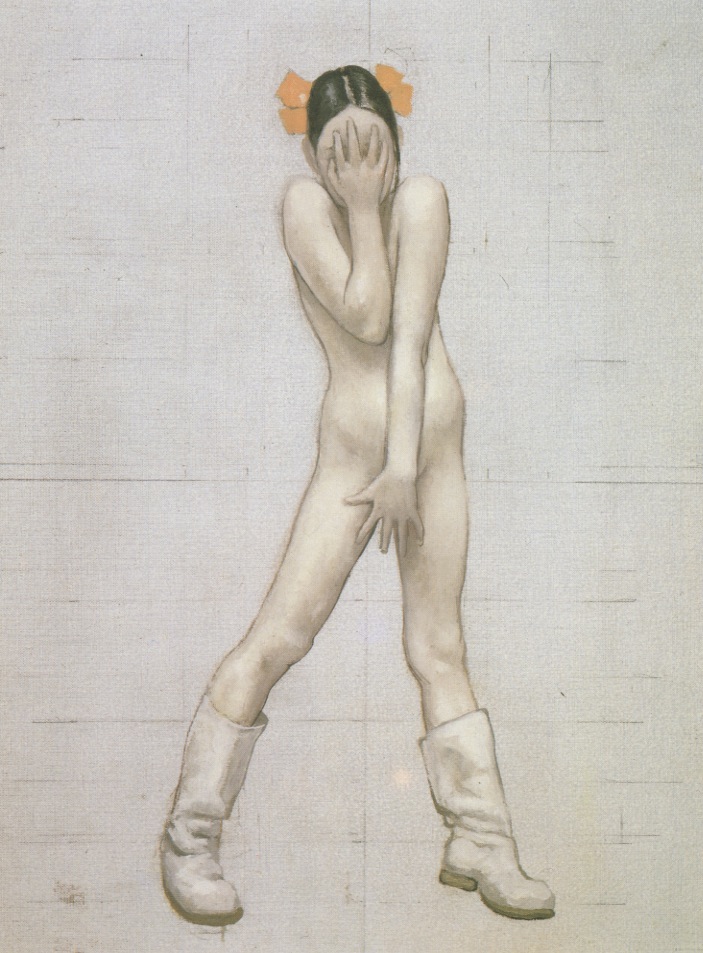 In his youth he told stories to his younger brothers, illustrated by drawings, among others about Corentin. Corentin became his main graphic novel. Paul was discovered by George Remi, also known as Hergé, creator of Tintin, and invited to join the staff of a new youth comics magazine, also titled Tintin. He was only 20 and didn’t believe Hergé when he told him that he had nothing more to teach the young artist in drawing technique. Here we have Corentin himself. 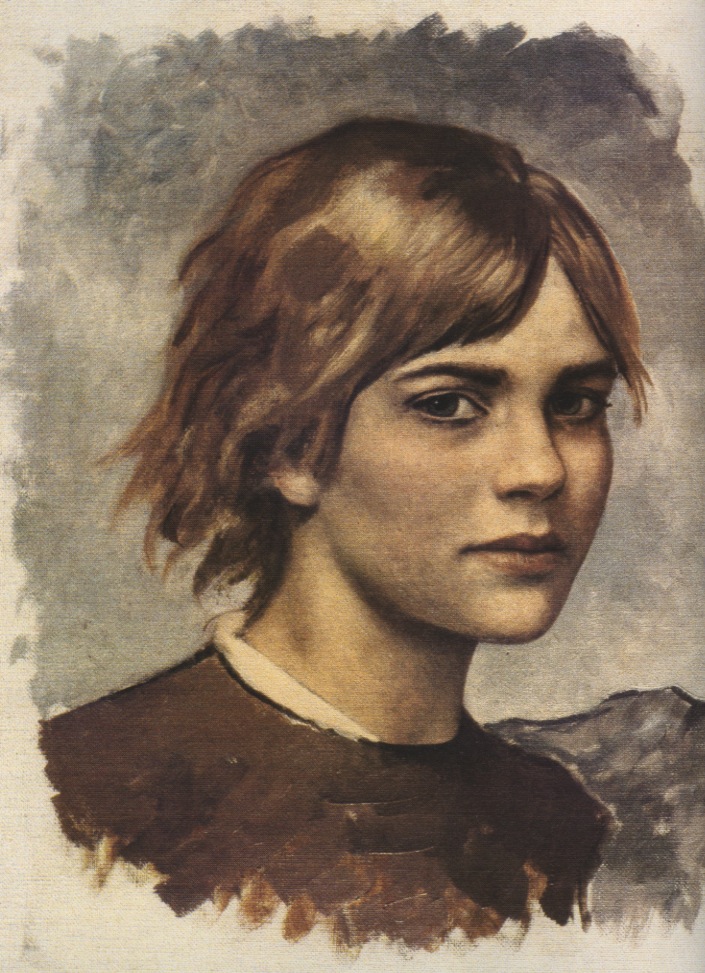 And with his main friends Kim, Belzébub, Sas-Kya and Moloch:

And here we have another example of Corentin and Kim with the oriental princess Sas-Kya, on a sketch for the front page of Tintin, the magazine mentioned earlier. 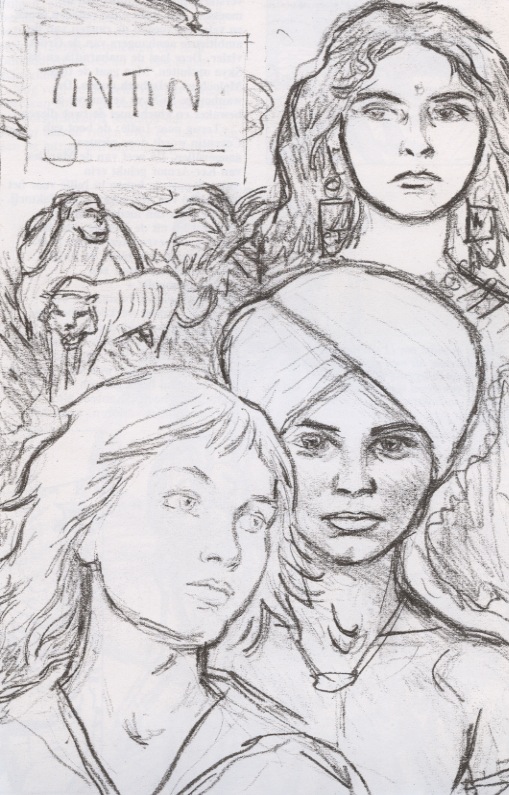 And here Line, another girl heroine of Paul, or in Dutch, Dientje. 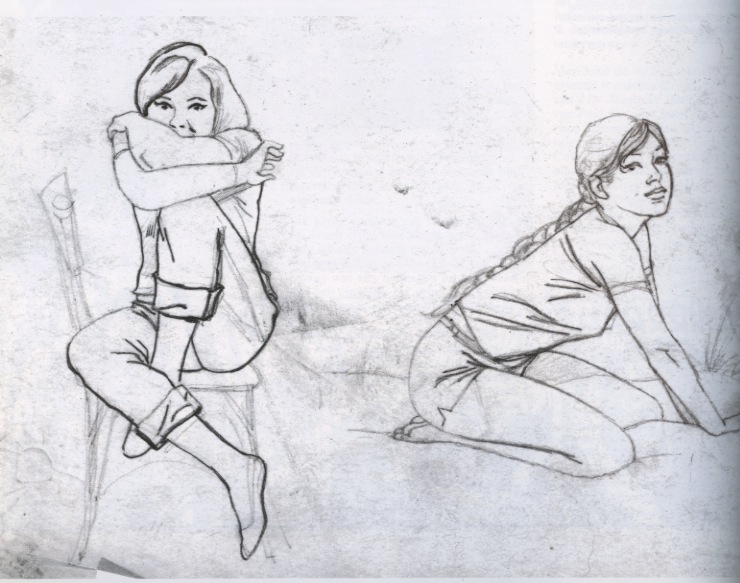 In all, Paul Cuvelier had several such series in graphic noveling: Corentin, Line and a few more. So, he was invited to jump in while still very young; it was his main living. But doing this sort of work had never really been his dream except for introducing certain inventions such as the so-called ‘Miraculous’ of Corentin, its ‘orientalism’. The world of classical art, nude art and drawings of mainly women and girls—rather more girls than women—was his main dream. Also important were his animals—mainly horses. This was his main impulse: the animated body, the soul in the flesh, its movement, its gestures and expressions. Here are some more Young Aphrodites, in oil—in fact, I have found none of these from Goddin’s book anywhere else on the internet.

Brigitte, his last model, is sketched here. Though already 18 years old, she had in the artist’s eyes this ‘Lolita quality’. 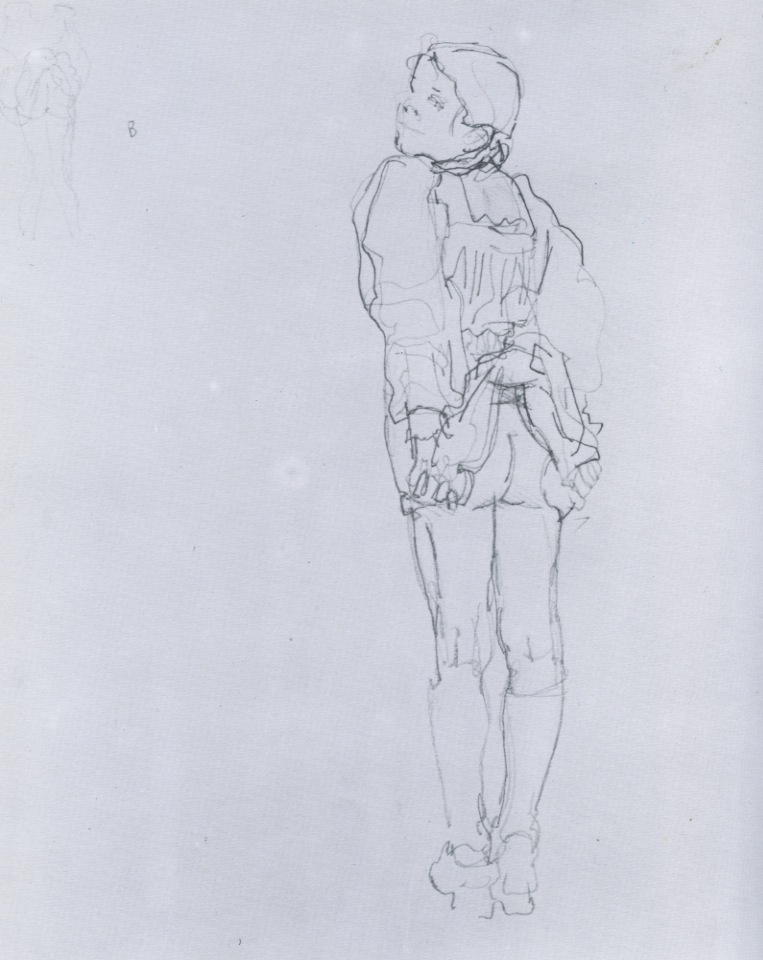 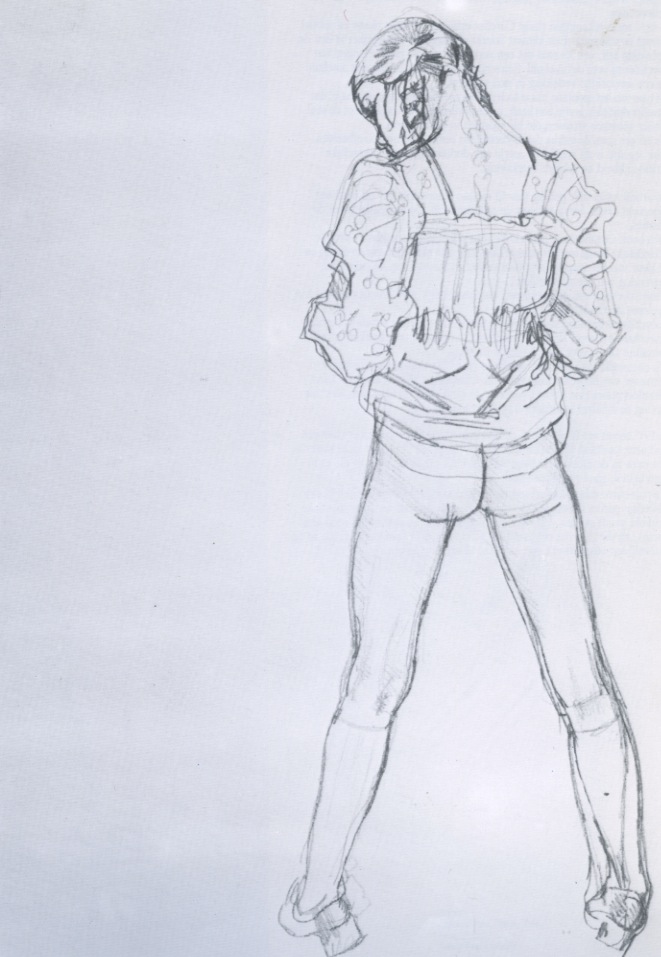 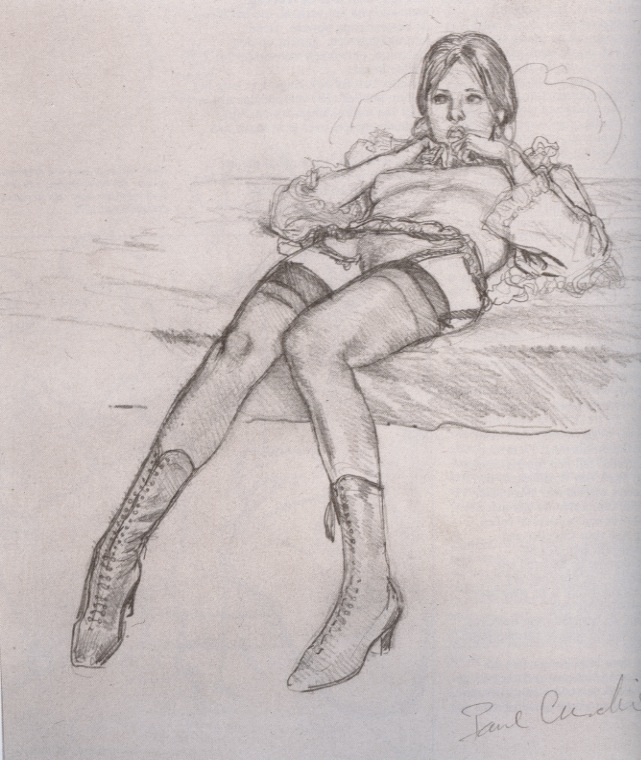 Comics or graphic noveling became too strict, too narrow for him. He missed—and probably suffered because of it—an artistic freedom. At first, he’d found that his work was not that commercial, but over time he felt a great uneasiness regarding the potential of his talents. And this was the case in his graphic noveling with frequent delays and incessant changes by scriptwriters. In the very beginning of his career, he wrote the stories himself, being the spiritual father of Corentin. He eventually became so unmotivated by this work, that he almost never read the script in advance. He would draw directly from whatever novel the story was based on, sometimes mistakenly drawing something that was not part of the script. 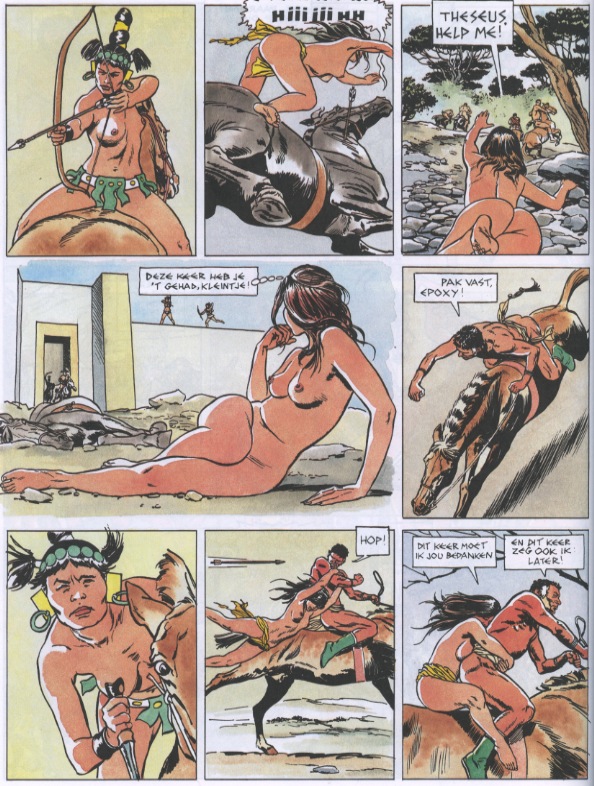 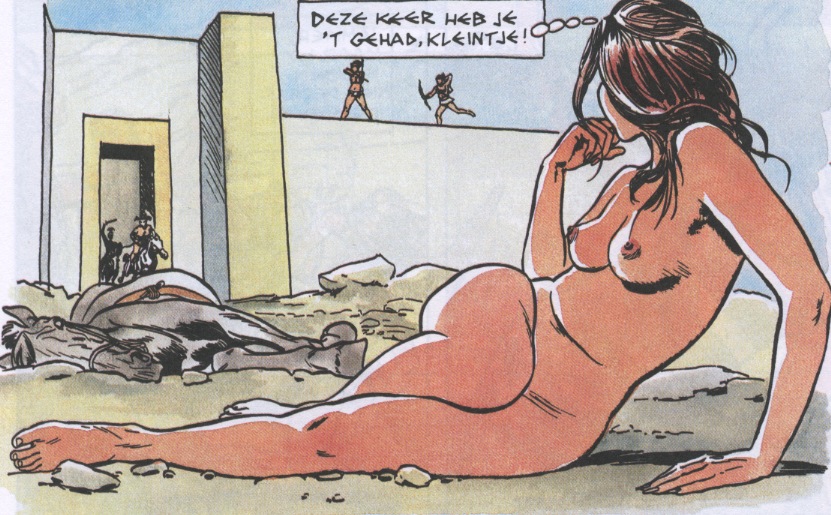 He lived his life and finally died in Brussels, on the 5th of July 1978, in a time of his life after he had quit graphic noveling and was drawing comics for youth. It was a time when he was strongly on his artistic path. As said earlier, there was one expo on ‘Young Aphrodites’ and so I offer a few more examples of this kind of work, somewhat sentimentally from Philippe Goddin’s book of the same name. 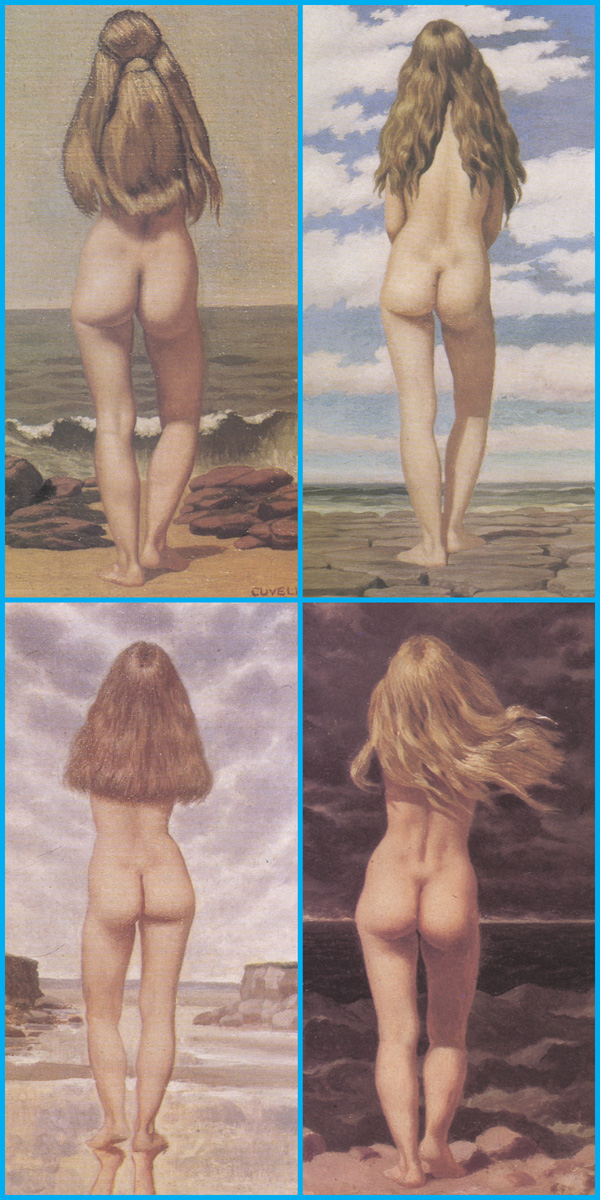 Near the end just before his untimely death, his work with the 18-year-old Brigitte developed. Although Brigitte is described by Goddin as a young woman, she was also a child still, not perfectly grown-up like adult women models. Thus she had a natural charm and grace—perhaps something like his heroine Line.

The two biographical works about Paul Cuvelier, written by Philippe Goddin, are informative with respect to biography and art. But I feel they are a bit too poetic or sentimental, especially Young Aphrodites. What do I mean by “Too poetic”? Isn’t this ‘Gypsy girl’—like those well-known sentimental Gypsy children—a poem in and of herself?

Maybe it would be good if a new biography were written. There is one site, in French, that is reasonably complete about Paul Cuvelier. However, there is a dearth of material from Young Aphrodites there; only one or two appear there. What would be the reason for that? Inquiries by email have yielded no response. There still needs to be more development there.

Until now, I could not find out where his originals are. Apparently many pieces are in private collections including family members. Are there any on display? I will inform readers later in the comments, should I find out. I am glad that more attention can be given to this artist. He is a well-known name in European comics and, paradoxically, he may not have been that well-known as an artist had he not been a graphic novelist.

At the moment his legacy in media is mainly in paper media, a heritage of the last 40, 50, 60 years—mainly out-of-print. He deserves more attention on the internet and I conclude with a few quotes from Philippe Goddin’s biography (translated into English) from July–August 1973.

I have made comics. By happenstance, the encounter with Hergé, I have made my profession of it. I have done this because I could draw. I loved drawing, but not so much the comics as such. I have drawn comics as a living.
In any case my work has acquired some publicity (particularly with Corentin), that comes probably from a certain quality of my drawing. My talent is unique and supports me in my artistic endeavors, just like drawing comics.
Drawing in all its forms means my life.
Art helps me to win myself back, to justify myself, to restore myself in honor in my own eyes. It makes it possible for me to bear my tough existence rather philosophically and helps me to continue the struggle.
My talent is innate. So it is not instinctive. It develops especially out of an extraordinary sensitivity for every form of nature that can move and is animated. A sharp sensitivity that results from intuition, from a quick and far-reaching understanding the inner structures due to observation. A sensitivity for every developed and organised life form. So sensitivity for the animal life form, for the human body, thus for the essence.
I must admit that my creations remain limited to the realistic imagination of the animal life form and, preferably, of the ‘Anima in Animale’: human being.
My drawing art will always have to suffer by the fact that I, since my youth and constantly thereafter, was not able to study nude bodies in all forms and all ages. I would have eagerly put half my working time into studying them, to draw them over and over again, to devote myself afterwards to real creation.
But yet, if it would be somewhat possible to study nature, with sketches drawn from life, certainly would have helped me more easily and quickly draw good, realistic comics. But I lack the material means to pay the numerous and suitable models that are necessary for such an enterprise. Especially because I would need these models for the whole period of the creation of a story. My drawings would certainly become more realistic, richer and more beautiful by this. Maybe though they would also lose part of their power of communication and calling, for such an enterprise might be able to undermine the power of creation. So although I cannot claim that I can make all the characters of a story after a model, I do avoid coincidental use of a sketch so as not to lower the level of my drawings, and to not get discouraged by comparisons. So I stick to pure imagination, even to the point that I refuse the help of a mirror (by which I could study this or that movement or perspective of myself).
One major exception to make things easy for myself was to learn from a sketch or a document that fits a certain image.
Yes, except for these rare exceptions I have great regret that I cannot claim that in my displayed work I have drawn absolutely everything from the imagination. It is however nearly true, and I know how much it has cost me. -Philippe Goddin, Corentin en de wegen van het wonderlijke. Paul Cuvelier en de strip (Corentin and the Paths of Miracle. Paul Cuvelier and the Graphic Novel), Extracts from 112-119, Brussel, 1984

After he had put his back into graphic noveling Paul Cuvelier engaged in a painful struggle between 1973 and 1978 … He devoted all his powers to the practice of his art. Without doubt he has worked less in service of his public image and his career, than in the function of his personal commitment. Marked by a tormented life and undermined by sickness Paul Cuvelier died on 5th July 1978, surrounded by his family. -Philippe Goddin, Corentin en de wegen van het wonderlijke. Paul Cuvelier en de strip (Corentin and the Paths of Miracle. Paul Cuvelier and the Graphic Novel), 119, Brussel, 1984

Maybe I can locate Goddin in order to speak with him about Paul Cuvelier’s place in art history and where his Nymphets or Young Aphrodites may be found. 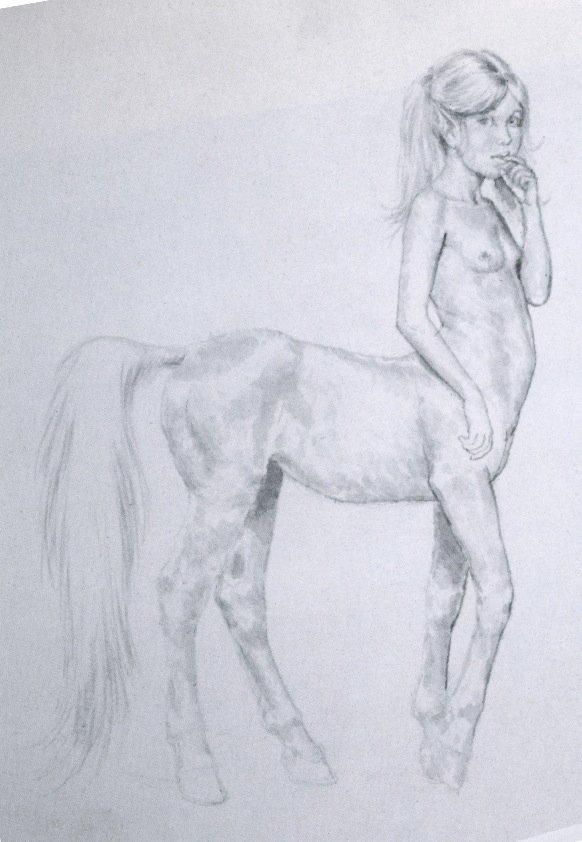