I am a regular reader of the French blog Les Éditions du Faune devoted to art and literature. On September 27 it published a good article on an interesting Swedish painter, Ivar Arosenius, who lived only 30 years.

Born on October 8, 1878, he started to study art at age 17; as an independent mind, he attended different schools until he returned to his old teacher who respected his freedom to explore his own fantasy and imagination.

Arosenius mostly painted in watercolours, experimenting with motion, texture and colour. He showed a surreal world which mixed fantasy and reality; in particular he illustrated fairy tales. He also worked for the press by producing satirical caricatures of Swedish society; however he never got a secure place with a journal, as his works, appearing as simple humour, were probably too subversive for a conservative society. 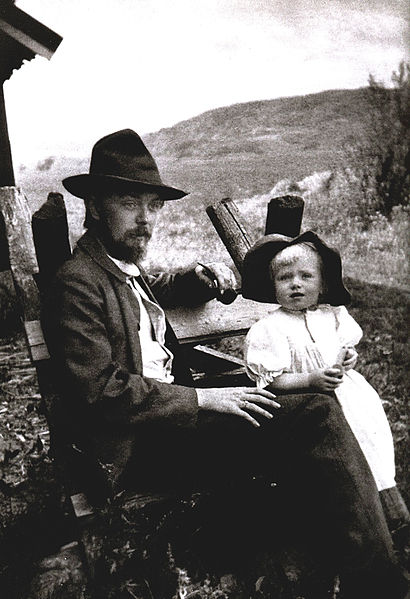 His family paintings show a completely different side of the artist, soft and tender. He often represented his wife Ida Andrea Cecilia (nicknamed Eva) as a fairytale princess or as a Madonna holding their child. He also lovingly painted their only daughter Eva Benedikta Elisabeth (1906–2004), better known by her nickname Lillan. 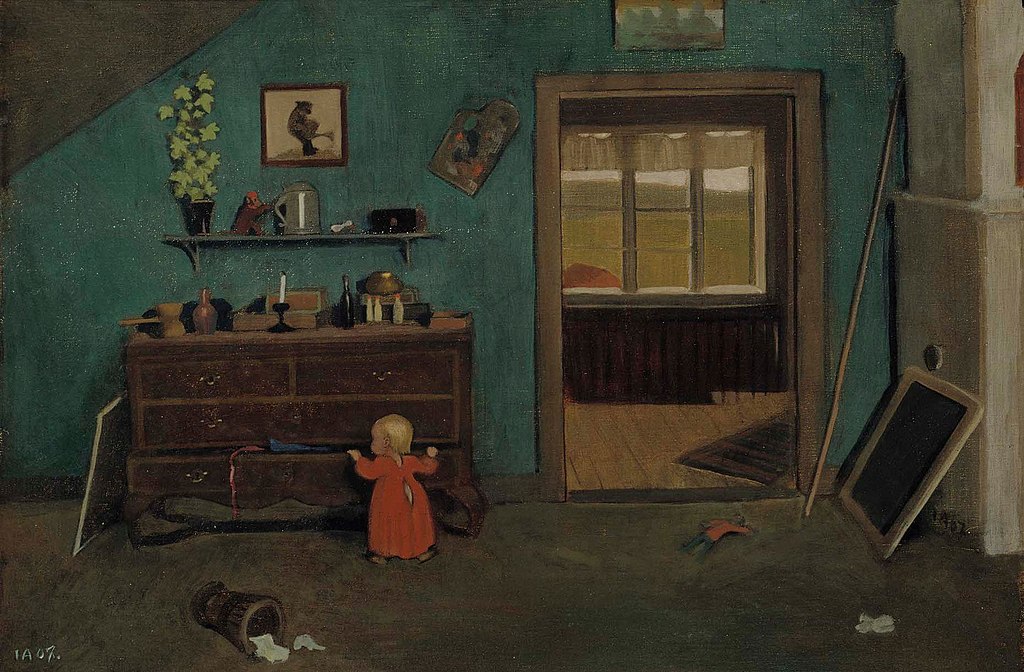 Ivar Arosenius – The Girl at the Door Interior of the Artist’s home, Älvängen (1908) 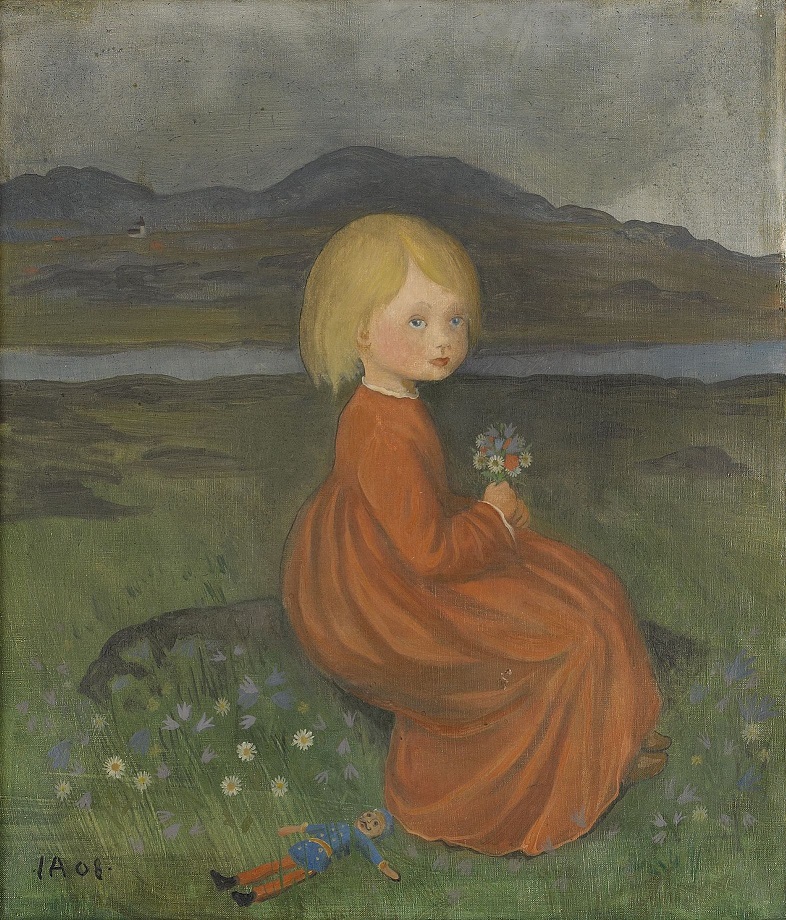 Arosenius’ most famous work is an illustrated tale that he wrote for Lillan: Kattresan (The Cat Journey), about the adventures of a little girl riding on her cat and discovering the world. A scan of it can be seen on the Swedish Literature Database (see the links on the right for the navigation through its 42 pages). I show a few pages from it; clearly the little girl looks like Lillan. 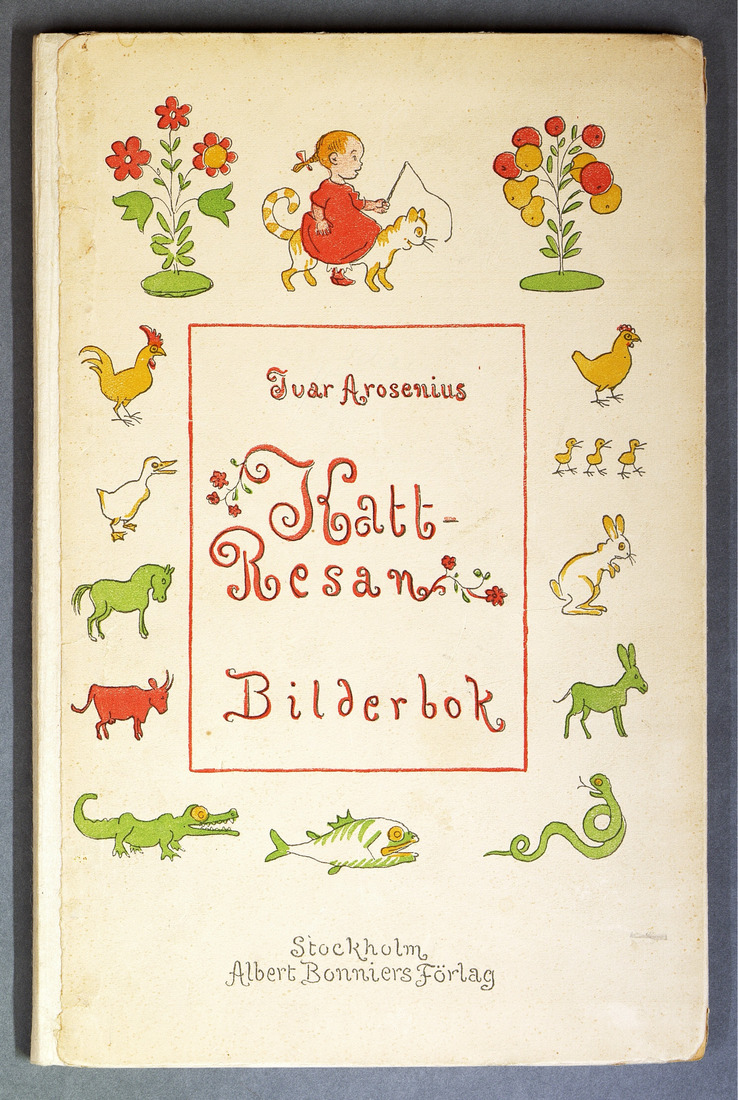 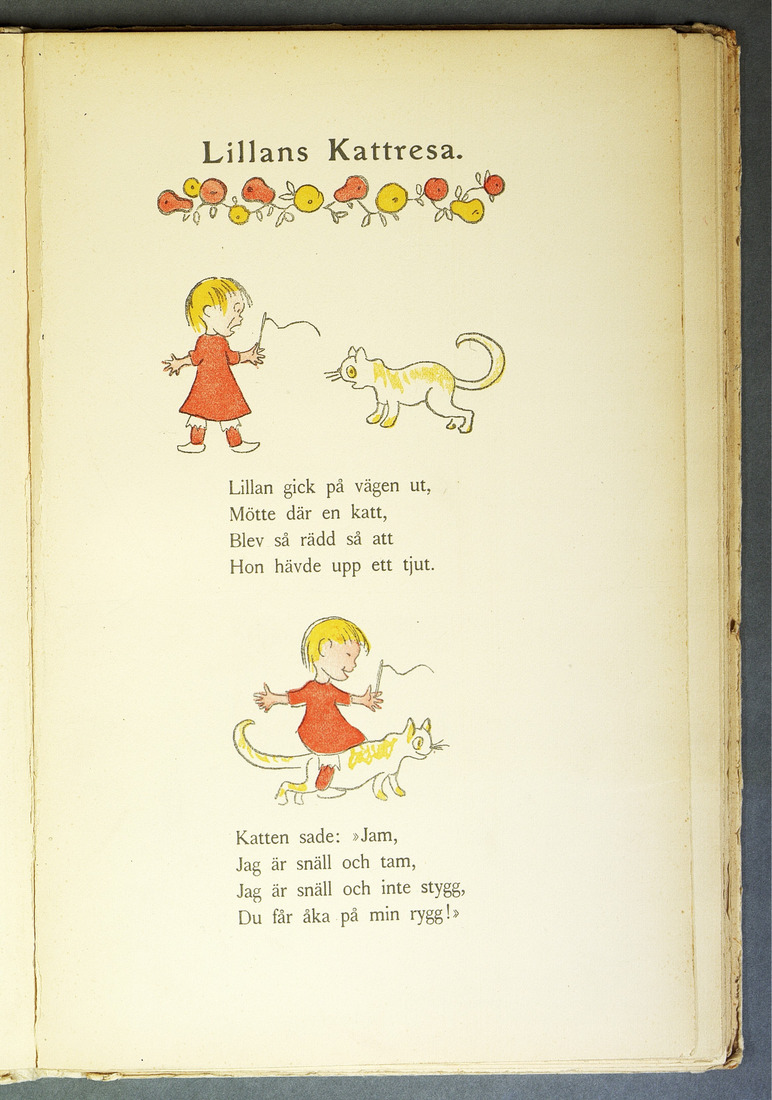 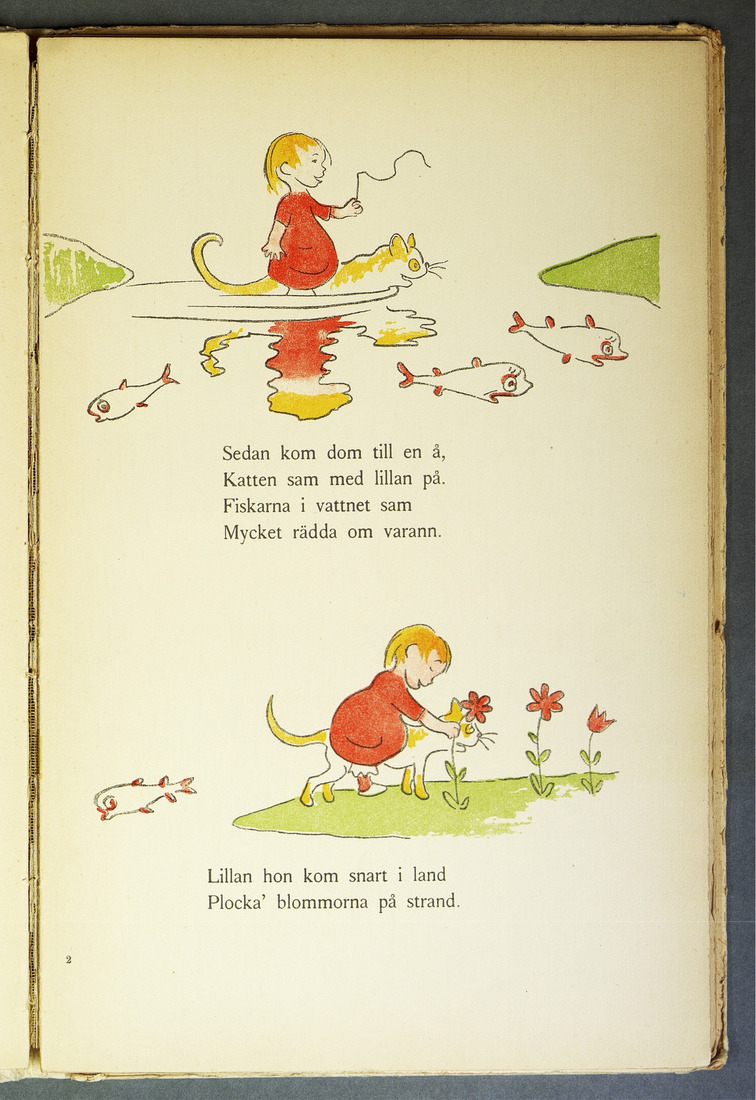 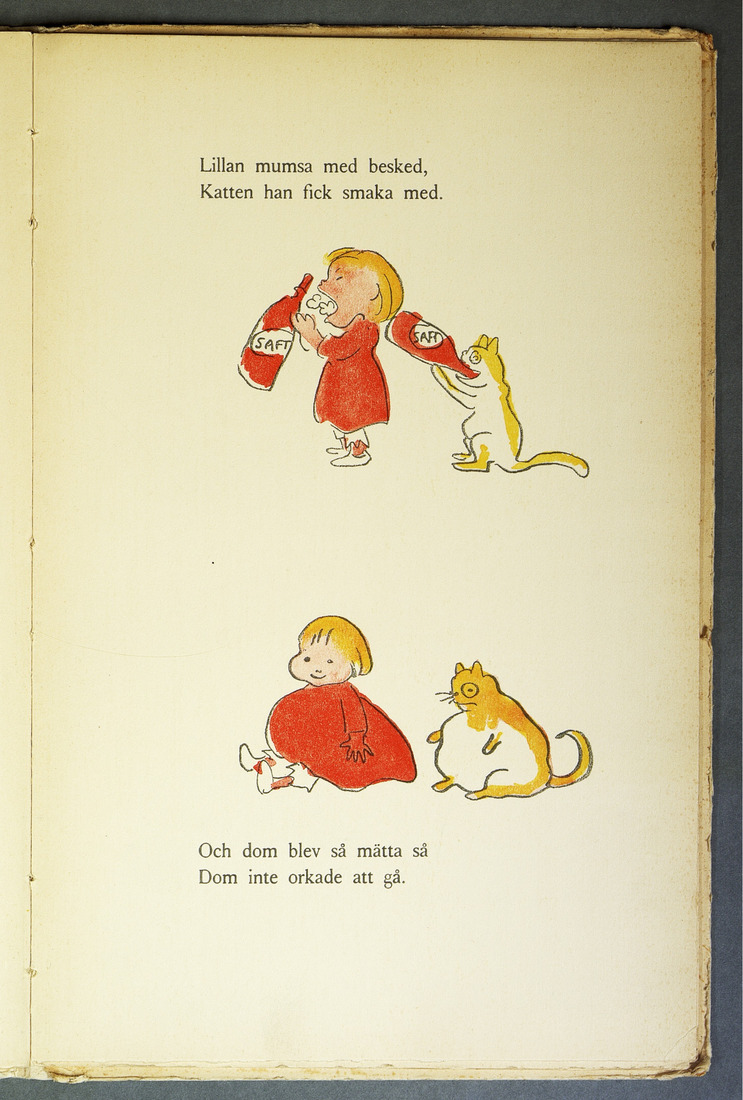 His wife and friends urged him to publish the book, so he set to improve the drawings, but he could not finish this work, as he died in the night from January the 1st to the 2nd, 1909 from the complications of haemophilia. The book was published posthumously the same year, and it brought fame to Arosenius. Indeed, in May, the Academy of Arts organised at last an exhibition of his work.

I found out that Arosenius made another version of Kattresan for Lillan’s twin cousins, one of whom was named Johanna, or simply Hanna or Hansan. Her grandson published 8 images on his blog from it.

Finally I show two pictures of Lillan in her teens. First a painting of Lillan with her cousin Hanna: 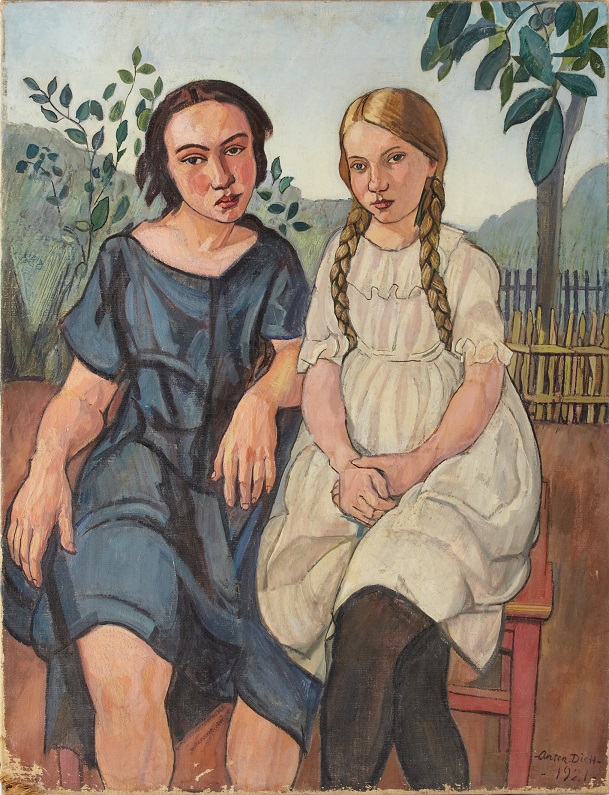 Next an undated photograph of Lillan from around the same time: 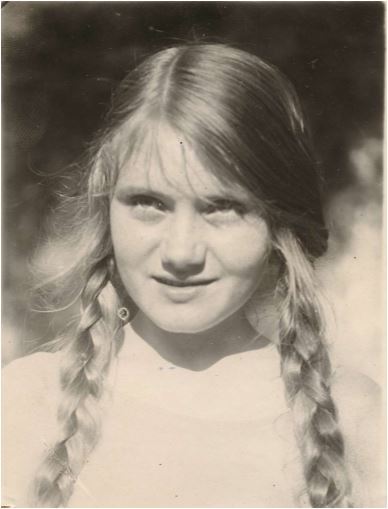