Since Pigtails is the website for the study of girls in art, it is appropriate to include some very early examples. Girls have been a popular subject in art for a very long time.

During the Magdalenian period in Europe (approximately 17,000 BC to 10,000 BC) people lived primarily by hunting. They had no metal tools. It is believed that they lived in tents in the summer, that could be easily moved to follow the herds of game. In the harsh winters of the time, they lived in more substantial shelters or, where caves or rock shelters were available, used them during the winters. Many of their artifacts have been found in rock shelters (overhanging cliffs), and therefore the Magdalenian people have come to be called “cave men”. The cave men are often portrayed as dumb and sub-human. This is not true.

The Magdalenians developed art that reflected this high intellectual level. The cave art at places such as Lascaux in France, Altamira in Spain, and Cresswell in England prove that highly sophisticated art flourished in the Magdalenian period. Most of the cave art consists of paintings or drawings of animals. At Cresswell, however, there are drawings that have been interpreted as dancing girls or women. The drawings are abstract, and do not appear to be representations of the human form to me, but I am not an expert on the conventions of prehistoric art. Dr. Paul Pettit is an expert, and according to him, “I interpret at least two of those long-necked birds as women – possibly some ritual dance undertaken by females, and possibly in the cave itself.” The first illustration is one of the drawings to which Dr. Pettit refers. 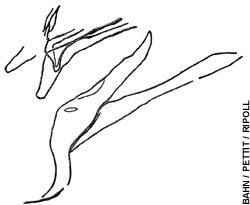 The next picture is my favorite example of Magdalenian art. It was found engraved on a rock in La Marche Cave, France, and dates from about 13,000 B.C. The figure wears the bulky clothing necessary for the cold climate of the era. When considered by itself, it may not be obvious if the figure is a girl, a boy, a woman, or a clean-shaven man. When we look at it together with other drawings from La Marche it is easier to interpret. There are drawings of people of both sexes, from a newborn with the umbilical cord still present to the elderly. The ratio of the size of the head to the size of the body indicate that this is a drawing of a juvenile. The dainty size of the feet and feminine features indicate that it is a girl.

The picture has a hurried quality, like a gesture drawing. Note that the legs seem to be double. Is that intentional, or did the artist, who could not erase his engraving, decide to slightly change the position of the legs? Is the girl wearing a cape? Does she have a rectangular object on her lap?

The last example is an ivory figure of a girl that has been named Venus Impudica or Vénus Impudique by modern archaeologists. It was found at Laugerie-Basse in France. It is a little over three inches tall, and is missing its head and feet. It was carved between 15,000 and 10,000 B.C. The breasts of the figure appear to be just beginning to develop, showing that it represents a girl rather than a woman. Venus Impudica is, in my opinion, cruder than the other examples of Magdalenian art in this post. Nevertheless, it has a certain charm about it. It is fascinating to think that it may have been a little girl’s doll. Perhaps a man long ago, with only a chip of flint for a knife, laboriously carved a doll for his beloved daughter. She probably loved her dolly as much as any modern girl loves her more sophisticated machine-made doll. 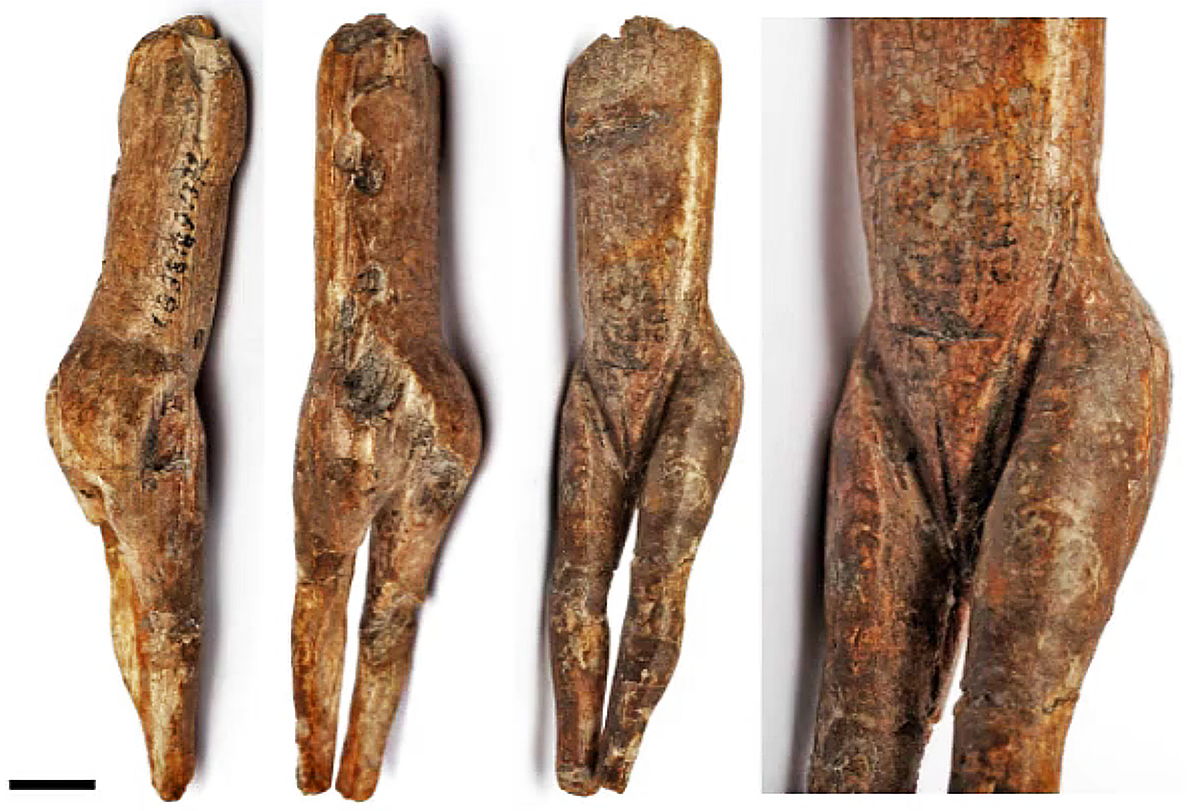