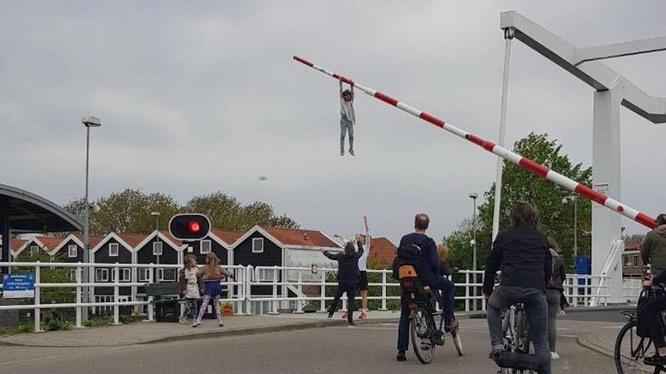 Recently on Thursday May 3rd an up-to-then unknown girl of 8 became famous for a few days. Sofie, who is from Spaarndam in the Netherlands started hanging several meters high on a bar in front of a bridge to a sluice. One might expect a stunt like to be attempted by a boy, but it wasn’t.

It is unknown whether she wanted to remain anonymous, at least until she had the chance to climb some real mountains. Suddenly she was lifted to a high altitude and found herself having a short adventure, in a manner of speaking. The whole thing lasted about one minute.

After the incident, her friend Noa said that Sofie suddenly went ‘wheeez’ into the air, holding on to the bar meant for stopping cars and pedestrians, like Sofie, from falling into the channel below as boats passed through. After the boat passed, the bridge went down again, but the bar was still too high for Sophie. “Like a silly one”, said Noa’s and Step’s (another friend of Sophie’s) fathers said afterward. The sluice operator realizing what was happening stopped the bar from going all the way back up. The father had warned the girls three times about playing with the bar when it was about to go up. He and a bystander quickly stood under her, pleading for Sofie to let go so they could catch her; but Sofie said she could not because her hands were too sticky, the very reason she went up in the first place.

She, Noa and Step were there on their way to an ice cream shop, which was subsequently delayed several hours after the aforementioned events, much to their dismay. Only once the bar was brought all the way down, did she finally return to earth. The father had some sharp words for her and she cried, but she also got a hug.

It was her practice of sport-climbing walls and climbing trees that helped her avoid a tragedy. But it did not save her from, as her mother explained, nightmares afterwards. A journalist asked Sophie what she would tell other kids about her experience. She cautioned that (translated from a YouTube clip), “Now, I would never do this. You would think it is just fun. But it is very, very high”. Here Sofie speaks about it in her native Dutch. In the video, a few boys could be heard saying, “We’re used to a lot here, but this we never saw before.