Just a little reminder that almost every well-known and first-rate figurative artist who worked before the 20th century created at least one image of a nude child. Here is a drawing by French Romantic-era painter Eugène Delacroix, whose most famous work is Liberty Leading the People, an image that has become virtually synonymous with the French Revolution.

Delacroix was born in 1798 in the French commune of Charenton-Saint-Maurice. Though his father was purported to be Charles-Henri Delacroix (a general in Napoleon’s army), his real father was probably the famous French bishop and politician Talleyrand, who was a friend of the family. He began his art career by studying under Pierre-Narcisse Guérin, and his influences include Raphael, Peter Paul Rubens, and especially Théodore Géricault, who innovated Romanticism in art. In addition to his Romantic images, he also experimented with Orientalism, eventually producing over 100 images featuring the peoples of North Africa.

But we, of course, are most interested in the following image, a drawing I literally couldn’t find any information on other than the artist and title. I did find two separate versions of it, so I’m sharing both. Though it’s difficult to tell for sure, the girl, who I’d guess to be somewhere between age three and six, appears to be leaning in a corner of a room. 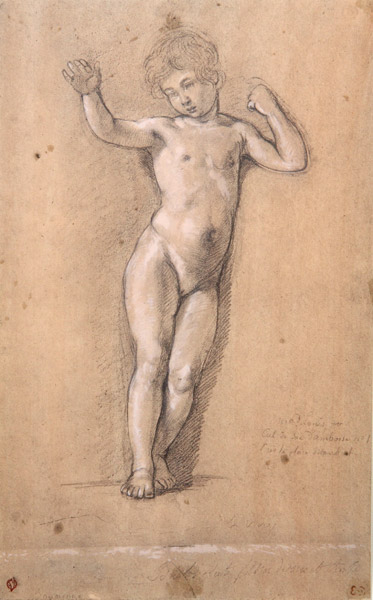 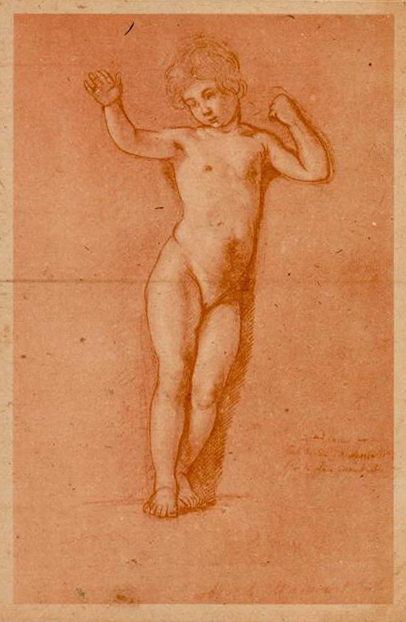 Update: Christian has taken the time to do further research into this image and was able to discover what the text at the bottom reads. Check out his comment in the section below this post for that, and for links to the source of the information (in French), as well as a larger version of the image itself and a small version of the painting that this eventually was used for, a Madonna and Child scene.

One thing that struck me about the image initially was how plump the girl’s thighs were. This is not out of keeping with Delacroix’s overall style, but given the degree of realism in this drawing otherwise, it felt like a deliberate exaggeration. Now it makes sense. It seems Delacroix had always planned for this model to stand in for the infant Jesus. Looking at the painting, one can see he made further modifications: the body overall is shorter and plumper, the head larger, and of course, he chose to obscure the child’s genitalia behind a cloth. That was likely always going to be his plan, which is why it didn’t matter that the original model was female rather than male. There is also an argument to be made that he may have chosen a female purposely, since feminine children were already perceived as prettier and more graceful than masculine children by then, and those are qualities a Romantic-era artist would likely wish to portray in the Christ-child. I would not at all be surprised if this was a somewhat common practice for Madonna and Child artworks created from the late Renaissance on.  – Pip

8 thoughts on “One from Eugène Delacroix”