I have thought of doing a post about Nancy for several years, but for two reasons I found it very hard to start. One reason is that many would not consider that comic strip to be on the same level as the fine art usually featured in Pigtails. Even as comic strip art, Nancy is minimalist. The gags are corny and although I loved Nancy, most of my friends thought the strip was dumb. The second reason is that there is so much material that it is difficult to choose a few representative examples for a short post. Ernie Bushmiller drew Nancy from 1933 to 1982, and other artists have continued the strip after Bushmiller died.

It is this lasting popularity of Nancy that makes me believe that it should be recognized in Pigtails. Nancy may well be the best known little girl in 20th century American art. By 1948, the strip appeared in 450 newspapers with a total circulation of 21 million. At the peak of Nancy’s popularity, in the 1970s, she was in 880 newspapers worldwide. Most papers were read by multiple members of the family, and the comics were read to those who had not yet learned to read. Perhaps 100 million people followed Nancy’s adventures each day. Even if Bushmiller is not in the same class as Da Vinci or Rembrandt, Pigtails in Paint would not be complete without a sample of his work.

Ernie Bushmiller was born in the Bronx, New York in 1905. His parents were immigrants; his father was from Germany and his mother from Ireland. Ernie’s father was an artist, a painter, who had to work at menial jobs in a struggle to support the family. Ernie learned two important things from his father. First, he learned an appreciation for the graphic arts and for literature. Second, he learned that it is difficult to support a family with fine art. To appeal to the masses, art should be simple and direct. Nancy certainly is.

Ernie quit school at age 14 and went to work as a copy boy at the New York World newspaper. At night he attended art classes. He was paid nine dollars per week, but he later said that he would have paid the paper to let him hang around. He loved working at the paper, where he worked with such cartoonist greats as Rudolph Dirks. Ernie’s big opportunity came in 1925 when he took over drawing the Fritzi Ritz comic. Fritzi Ritz was a liberated young 1920s flapper. In 1933 Fritzi’s orphan niece, Nancy, came to live with her. At first, Nancy was intended to be a temporary part of the strip. However, Nancy was so popular that she became a permanent character in Fritzi Ritz. She was more popular than Fritzi herself. Just as Popeye ousted Castor Oyl as the protagonist of Thimble Theater, and Snuffy Smith took over the Barney Google strip, Nancy became the focus of the Fritzi Ritz strip. Aunt Fritzi was relegated to a secondary role as the adult authority figure, and in 1938 the name of the strip was officially changed to Nancy.

What was it about the little girl that made her so loved by the readers?  She was obviously more popular than the adult woman Fritzi.  The little boy who was the lead male in the strip, Sluggo, was there only to support Nancy.  Soon after Nancy appeared, there was a story in the Fritzi Ritz strip about an entrepreneur marketing a doll modeled after Nancy.  Since dolls in the 1930s were generally girl dolls, this may be why Bushmiller chose to include a niece instead of a nephew in Fritzi Ritz.  A girl probably works better in the later strips as well.  I believe that the creator of the Little Lulu comic, Marjorie Henderson Buell, was correct when she noted that a mischievous little girl can get away with stunts that look cute, but would look boorish if done by a boy.

As the Nancy strip matured, the style became bolder and more minimalist. Everything in the art was there to support the gag. Everything was explicit. If the scene was a circus side show, the tents would be labeled in large capital letters “CIRCUS” and “SIDE SHOW.”

The strip above, from 1970, is a good example of the Bushmiller’s humor. There were a lot of hippies in 1970. There were also dwarfs (called midgets in 1970). Hippies were seen as foolish and lazy and were the subject of many jokes. However, simply being a hippie was not funny; the hippie had to do something particularly foolish or lazy to make the joke. Simply being a dwarf was not funny either; the dwarf had to do something unique to cope with his small stature to make the joke. The point of this strip is not that we should laugh at the dwarf hippie but that we should laugh at Nancy for believing such an outrageous thing as a dwarf hippie is possible. Note that the scene is near a circus side show. The “freaks” exhibited at carnivals and side shows in 1970 were usually fake, and at best greatly exaggerated. This “midget hippie” is really a midget, but is only pretending to be a hippie for the side show.  In spite of his lack of facial hair, we know he is a dwarf and not a child because he smokes a cigar. Normally, children do not smoke, and in the world of Nancy, everything is normal. One of the keys to understanding the humor is to understand that Nancy’s world is more normal than reality. Things that would be slightly unusual in real life (such as a dwarf hippie) are often amazing or impossible in a Nancy strip. Even something as simple as wearing a wig is weird enough to make Sluggo’s hat fly off of his head.

You can read more Nancy strips here. To better understand the art and subtle humor, you may want to read How to Read Nancy: The Elements of Comics in Three Easy Panels by Paul Karasik and Mark Newgarden, and The Best of Ernie Bushmiller’s Nancy by Brian Walker.

Nancy has had some strong competition. Little Lulu was another popular children’s humor strip featuring a young girl. Little Lulu was in some ways like Nancy, but the plots were a little more complex and the humor was more sophisticated. Lulu has also starred in animated cartoons. Many would say Little Lulu was funnier than Nancy, but Nancy’s humor was unique. Little Orphan Annie was an adventure strip with a girl protagonist. The surreal art that portrayed people with no pupils in the eyeballs was instantly recognizable. Annie’s exciting adventures made her another popular comic strip character. Annie also has been in a musical and movies. Shizuka Minamoto, the female lead of the Doraemon comic strip, may be as well-known in Japan as Nancy is in America. The Japanese humor in Doraemon never achieved the success of Nancy in America. When the male lead in Doraemon embarrassed Shizuka by walking in when she was naked, which happened very often, it was innocent children’s humor in Japan, but would be seen differently in America.  The Doraemon panel below was translated by Forgotten Scans. 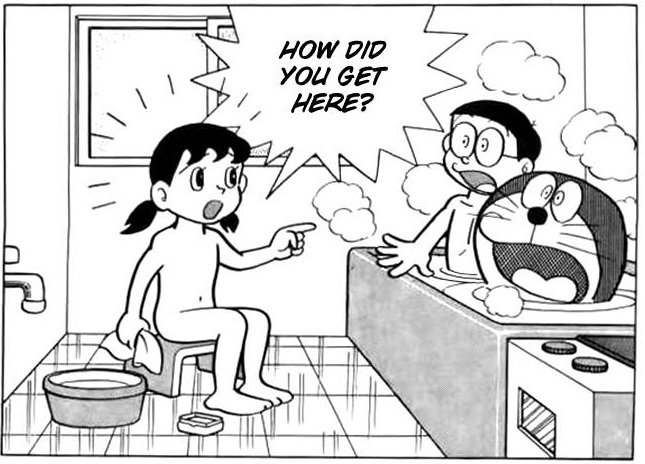 Nancy has been seven years old for 85 years. She is still popular, and her comic strip is still in production. I expect she will be in the comics for many decades to come.