One day there was this Dutch girl, Floortje, who got an “internship” at the company ‘Italy in the Polder’, selling Italian cars and scooters in Holland. A polder is a phenomenon peculiar to the Netherlands referring to land that has been reclaimed from the sea and low-lying rivers. ‘The Polder’ has also become a term to indicate the Netherlands generally. This was what Floortje did and thus sold her first Maserati within 4 hours. This second video’s title is ‘Floortje verpatst Maserati’. ‘Verpatsen’ is the typical Dutch way of saying that something is very easy to sell—almost too easy!

The context of this first video is unusual in that it is not strictly a proper commercial. It may simply have been Floortje’s audition performance. Actually selling a Maserati in this fashion, as can be seen in the second video, is a news item about the unexpected continuation of that performance. The story is essentially this. There was this guy, Sam, who is the entrepreneur of ‘Italy in the Polder‘. And Sam also has creative ambitions of making videos and singing in them and so makes commercials he also calls ‘Italy in the Polder’. His neighbour girl Floor asked him several times whether she could act in one of them. 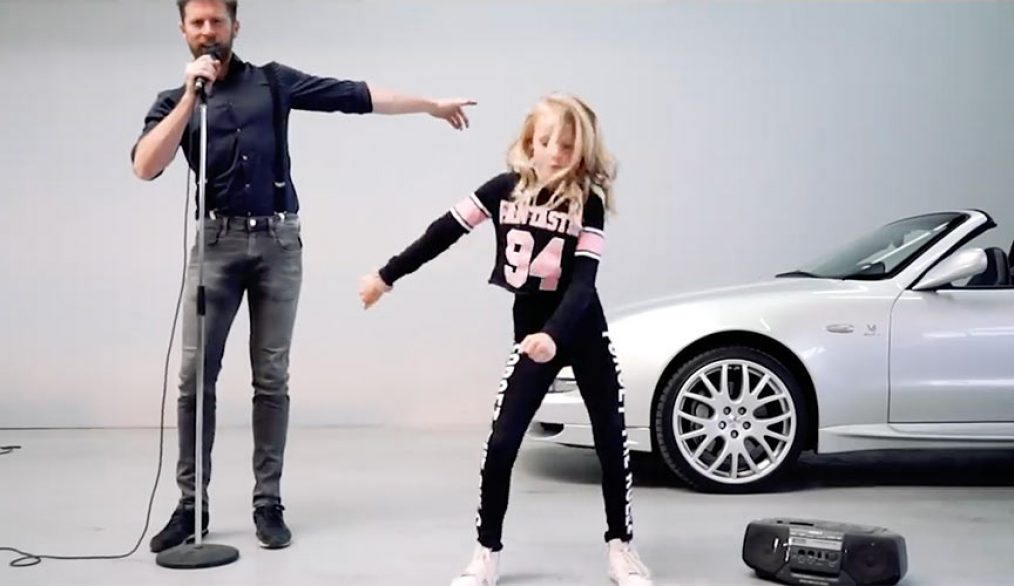 In her first clip, Sam tells her that she has a very interesting approach but how does she expect to sell a car? Floor answers that the car will sell itself! In the second clip Sam comments that there is a whole shop dedicated exclusively to these cars but to sell one in 2018 one needs to do something special. Floor put together these dances probably from things she has seen before. In answering a question from a reporter, she simply explained that she did some kind of shuffle and something called ‘swish swish’ and then she danced (as if the shuffle and swish swish were not dances themselves). Here is an example of shuffle which begins at the 31 second mark. The swish swish comes from the so-called ‘Backpack Kid’ which is connected to Katy Perry. I was able to find some girls doing these two dances and even found one that combined both. But what the originals may have looked like must be left to the imagination, as I could not find any clear example on YouTube.

After being questioned about making a sale in just a few hours Floortje says only, “we have sold it!”, in a tone of surprise. She did not think that the clip would have been watched by so many people.

So, it is quite possible to drive a Maserati over the Dutch dikes. And one day Floortje herself may drive one, if ‘the Polder’ can manage to stay dry until then.