A doll is more than a toy. It can represent various things: an ideal version of oneself, an intimate companion, a butt or whipping boy, a super-hero, a training for future parenting, etc. Generally dolls take the shape of European babies or children, often girls.

How do dolls relate to race in the United States, a country deeply marked first by slavery, then by segregation? In the 1940s, Mamie Phipps and her husband Kenneth Clark, two African-American social psychologists, designed and conducted a series of experiments known colloquially as the “doll tests” to study the psychological effects of segregation on African-American children. They described the protocol in a scientific article: the children (aged 3 to 7) were shown two dolls, identical except for the colour of the skin and the hair, then asked several questions. The questions involved which ones had certain qualities (“nice,” “bad,” “that you like best,” etc.), the race of the dolls, and which one looked like them. Most children, while identifying the race of the dolls and recognising their resemblance to the black one, attributed positive qualities to the white doll. The following video shows this experiment:

This test was recently performed in A Girl Like Me, a 2005 documentary by Kiri Davis about African-American teenage girls.

The relation between dolls and race is at the heart of the exhibition “Black Dolls” showing the Deborah Neff collection of dolls and photographs, which was held from February 23 to May 20 in La maison rouge in Paris.

African-American children often had white dolls, as can be seen in the following two photographs: 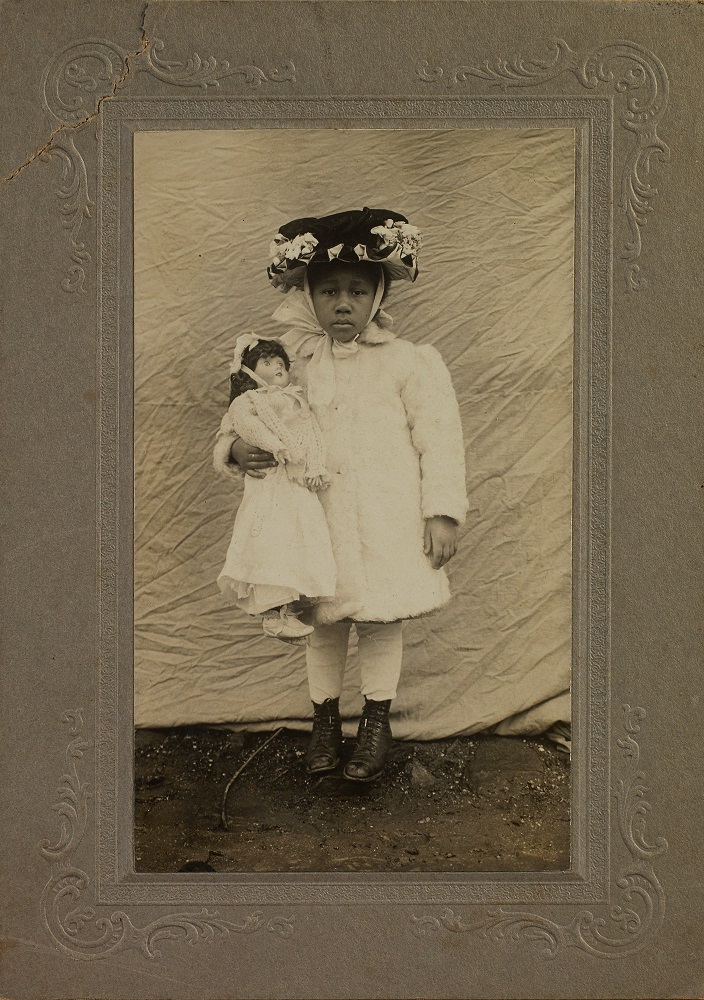 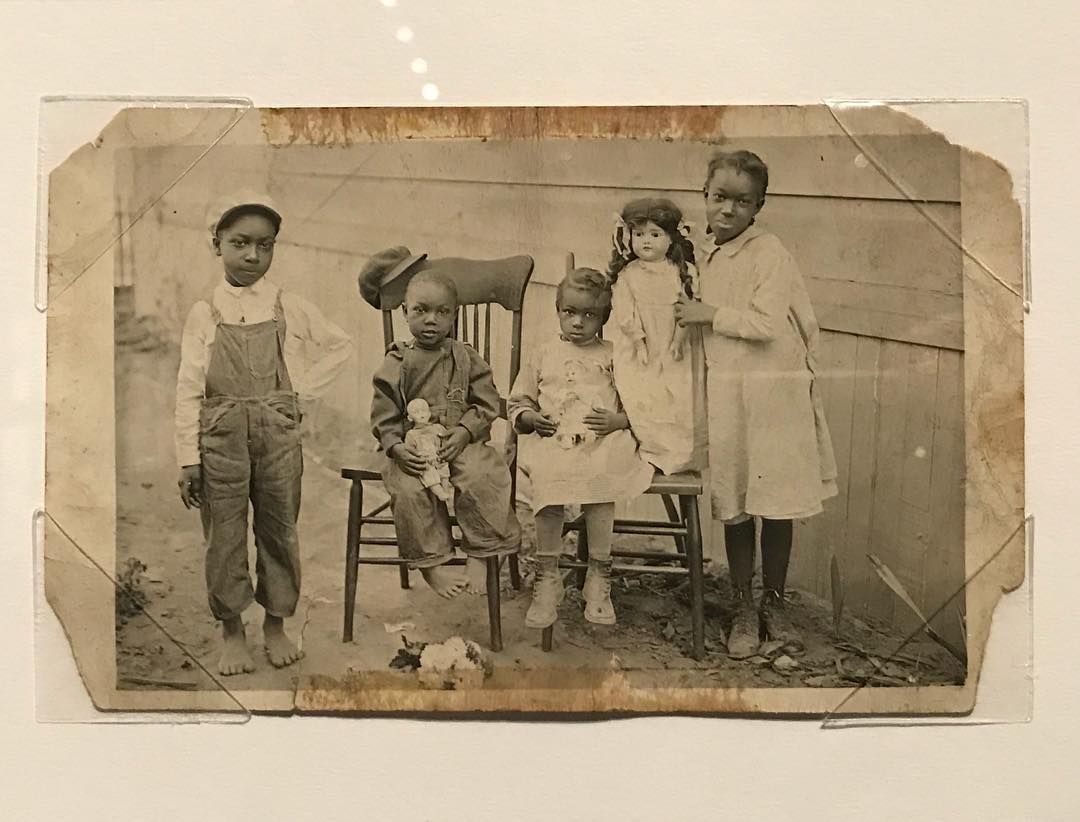 Were there black dolls? What did they look like? First we have the racist stereotype; as writes Robin Bernstein about the “minstrel mask” of racist theatrical performance, “it renders skin jet-black, transforms eyes into oversized pops of white, and stretches lips into a fire-engine red vortex.” A gallery of such caricatures can be seen here.

Then there is the “darkened European doll,” a doll with facial features and clothing corresponding to a European person, but with a dark-coloured skin. Finally there is a long tradition of hand-made black dolls giving a more dignified view of African-Americans. Deborah Neff collected hundreds of them, most of them made between 1840 and 1940. Here are three dolls from her collection: 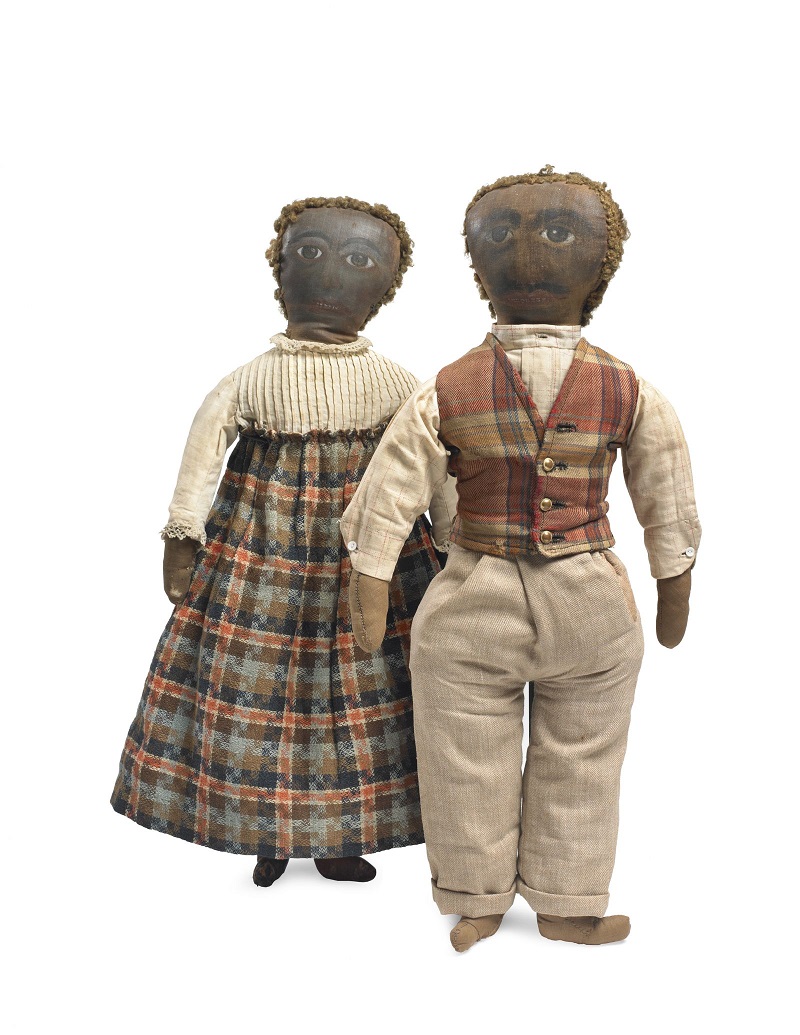 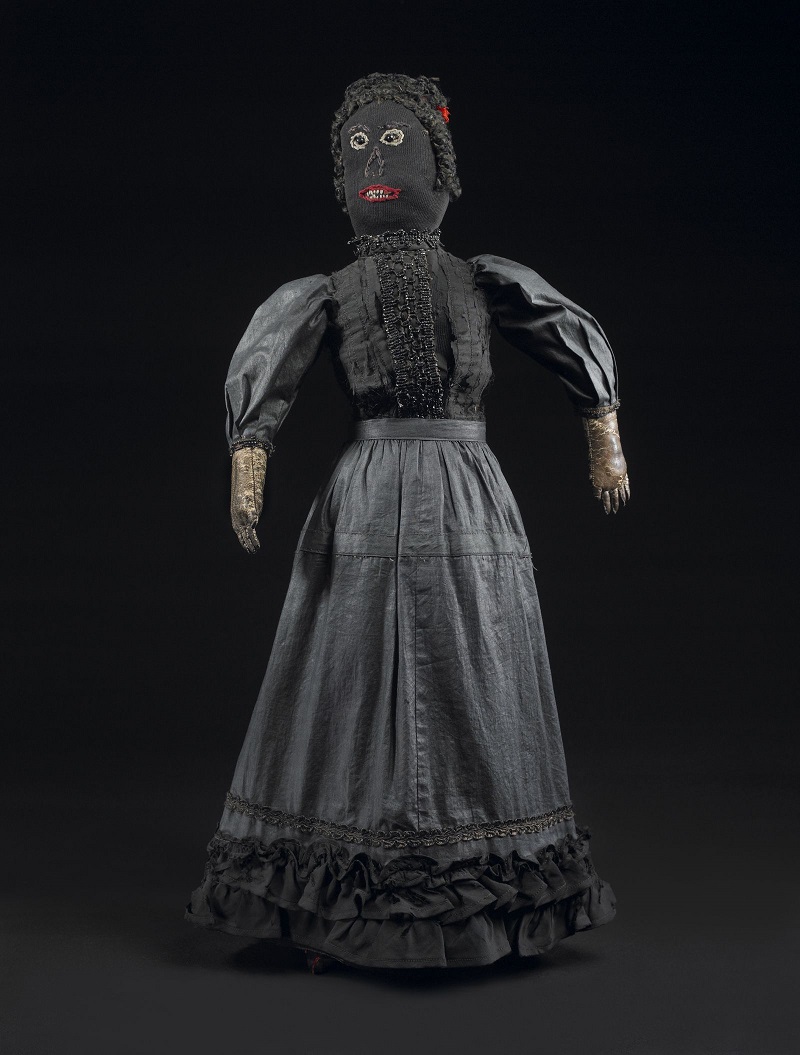 Generally these dolls were made by African-American women, in particular in the South. One would expect that they would be given to their children, but one can find several photographs and paintings of white children with black dolls, as shown here: 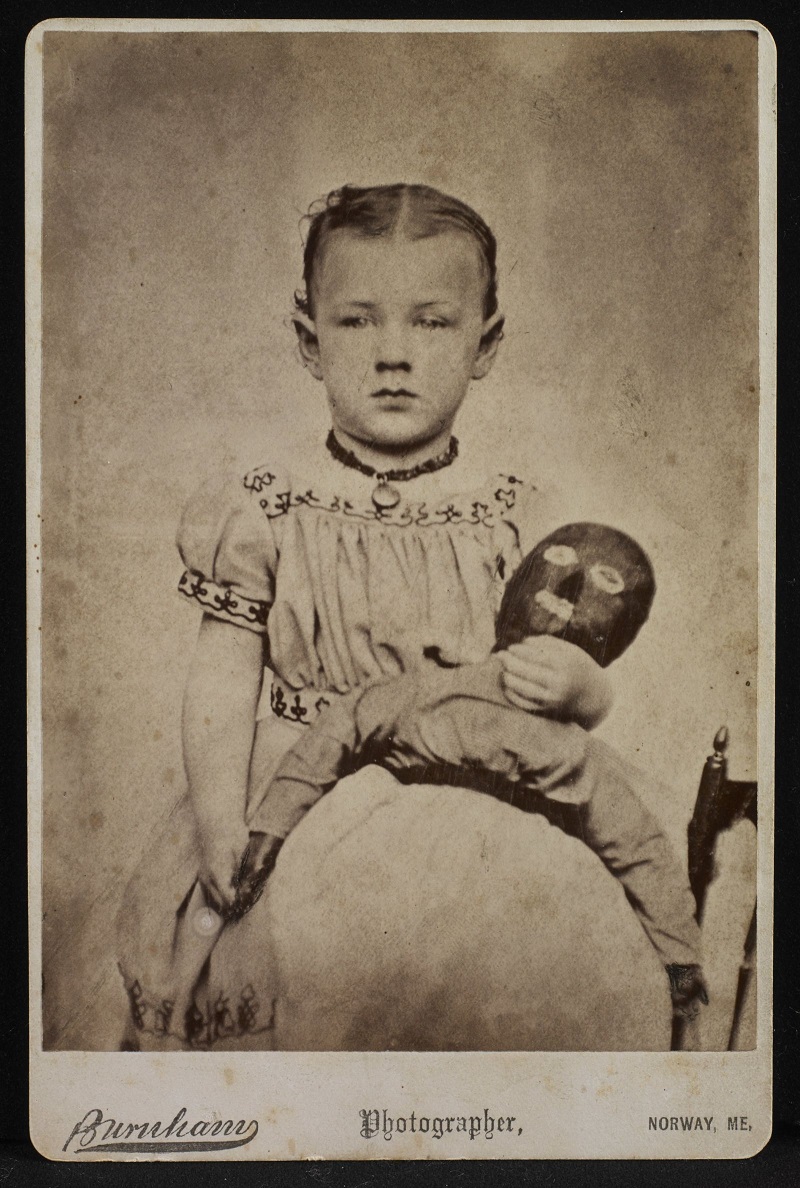 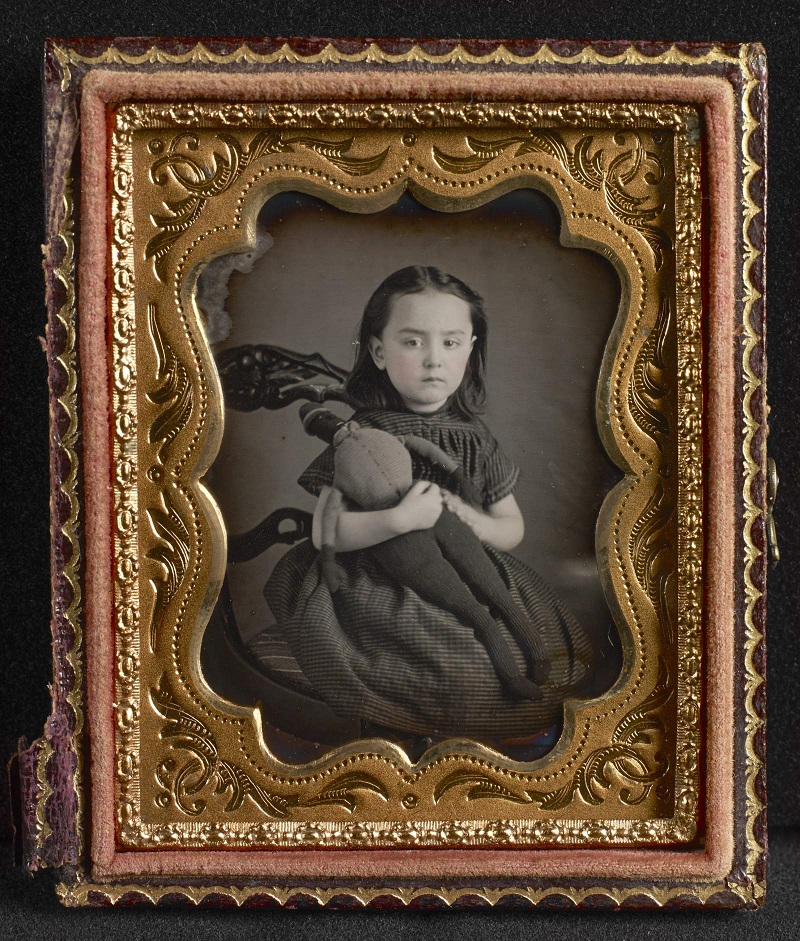 Probably many white children in the South got such dolls from their black nannies. However in the North, anti-slavery activists also made black dolls to be sold during fund-raising events, so parents would intentionally give black dolls to their children as a token of support for black emancipation.

A strange configuration is the “topsy-turvy” or “twinning” doll, which was popular in the 19th century, especially in the South. It has no legs, but two heads, two pairs of arms and two torsos, black on one side and white on the opposite side. See here: 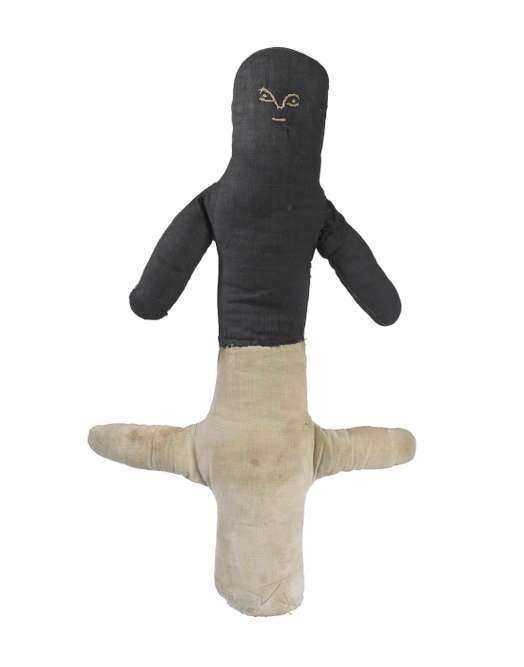 At the shared waist was attached a long reversible skirt. Flipped one way, it hid one side, as shown below: 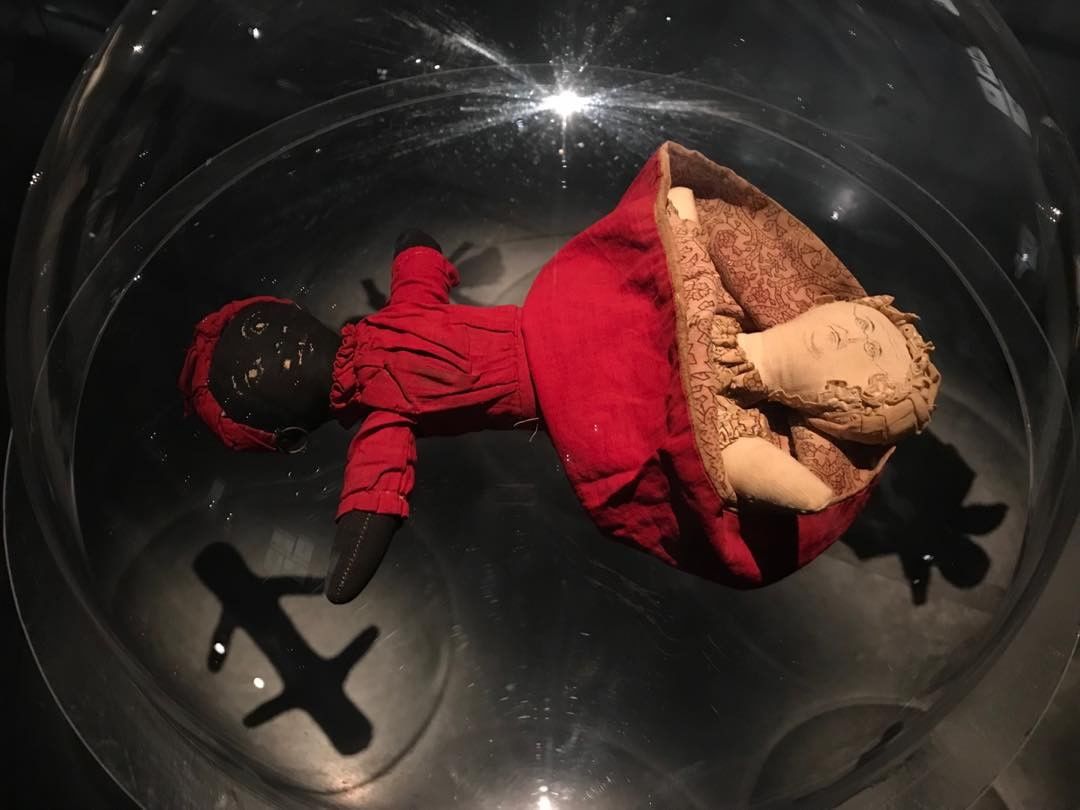 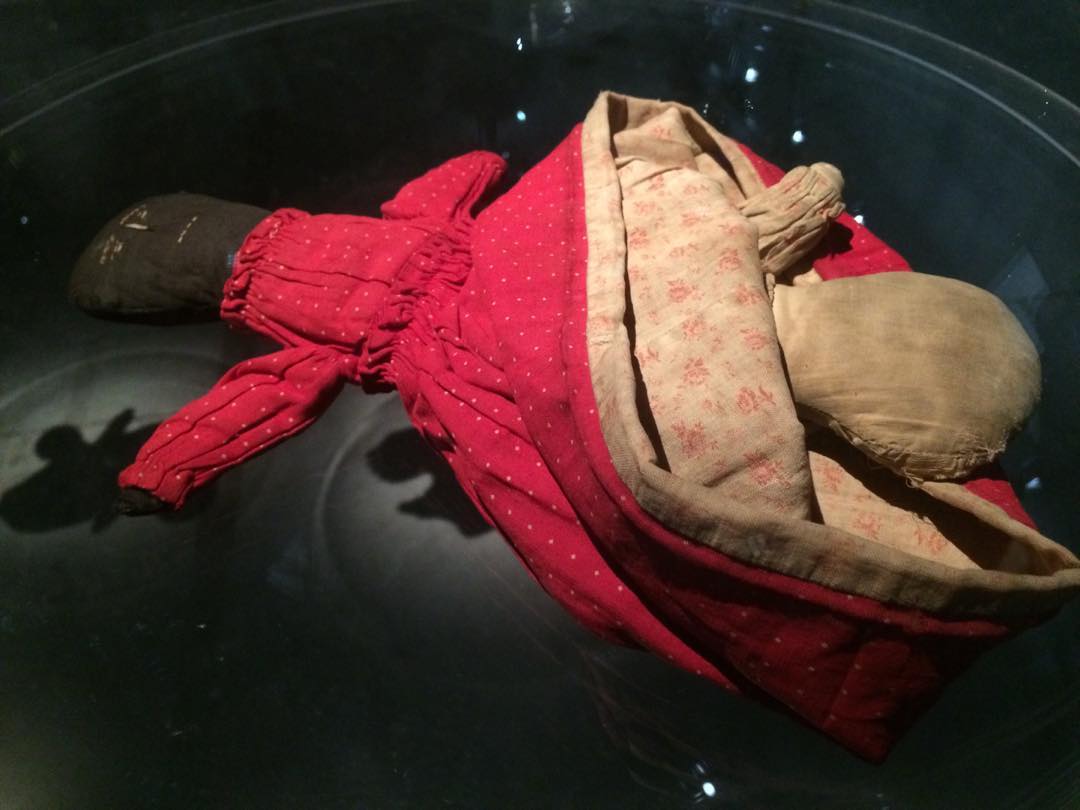 In the words of a 1903 advertisement, “Turn you up / Turn you back / First you’re white / Then you’re black.” According to Patricia Williams, these dolls made by enslaved black women expressed the cruel ambiguities of their motherhood: some of their children, also slaves, resulted from their rape by their white master, while they had to serve as nannies for the free children that the same master had with his legitimate white wife.

According to Deborah Neff, other less credible explanations have been given, that black children on plantations were not allowed to play with white dolls, or the opposite, that they were were not allowed to play with black dolls. Another theory is that they descend from German “hex” (witch) dolls, which made their way to Pennsylvania: they had one animal side and an opposite human side, one for casting spells and the other for curing ailments.

At the beginning of the 20th century, black militants encouraged the manufacture of black dolls as a way of teaching African-American children the dignity of their origins. Anyway, the tradition of sewing dolls at home disappeared after World War II, and plastic replaced cotton; so there are few recent dolls in the collection.

I end with five pictures of the exhibition in La maison rouge, Paris: 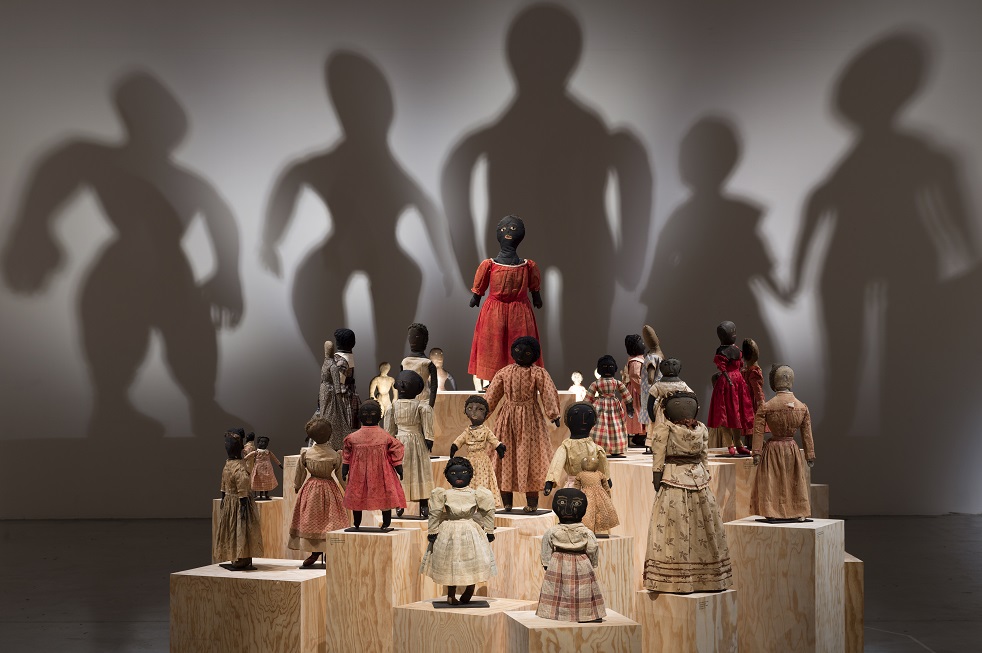 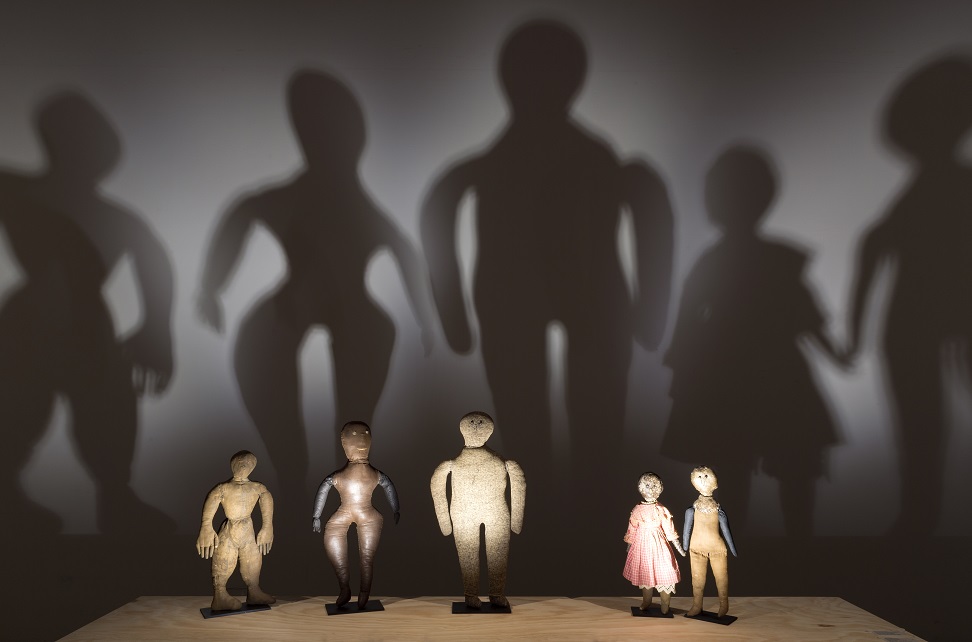 In the 5th photograph, we see at the back a photograph by J.C. Patton, from around 1915, of a middle-class black family; the little girl holds a white doll. In front of it several “topsy-turvy” dolls are exhibited. 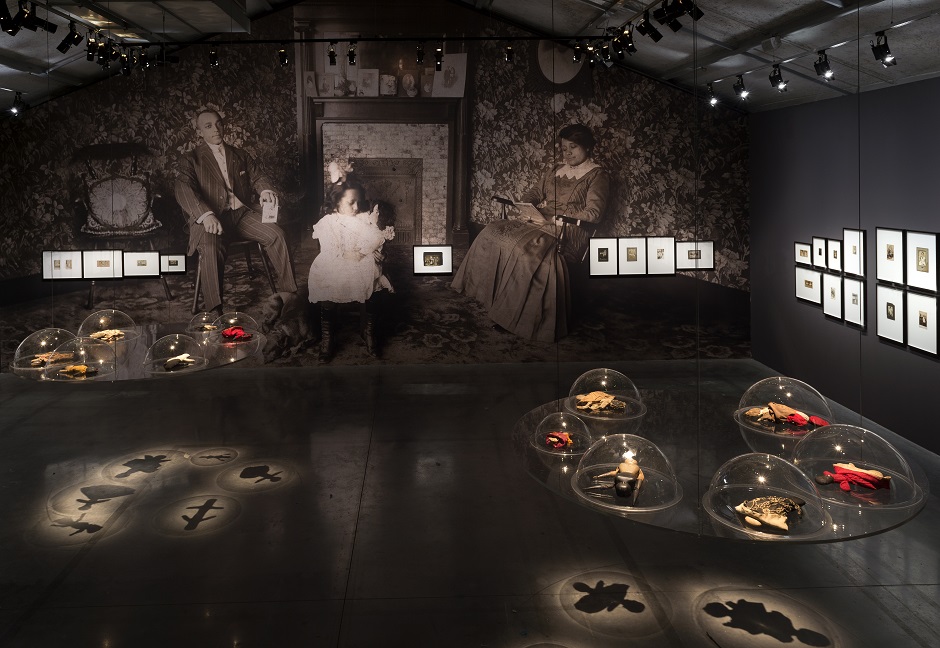 Interested readers will find the above material, and much more, in the exhibition book: