My First Artist Friend: I must regrettably inform everyone that Polixeni Papapetrou passed away on April 11th at the age of 57. She is survived be her immediate family: husband Robert Nelson and two college-aged children, Olympia and Solomon who posed for the artist frequently. She is also survived by what must be a multitude of friends and fans.

One of the things about the internet is that it is so anonymous and impersonal. Even legitimate email comments or inquiries go unanswered. I wrote her a short note of support in 2008 at a time when the media were staked outside her home during a resurgence of controversy about an image of Olympia in the nude. She actually took the time to reply thanking me and responded to some comments I made about other artists like Sally Mann, whom she admired. At the time, I did not realize she was an expert on Charles Dodgson (Lewis Carroll) and gave me a reading list. Years later, she even sent me a copy of her dissertation on Carroll.

The ironic part about the controversy was that she was being ridiculed for child nudes which were actually quite conservative and were only a momentary diversion by an adoring mother. In our missives to one another, the subject of nudity often came up and Poli always felt it necessary to remind me that she was not really interested in nudes per se. In fact, her motifs in her later work clearly centered around the idea of our persona, attire, masks and the outer surface of things. Admittedly, many people did not understand the images of children in animal masks, masks of old people, clowns, etc. But Poli was making a sincere exploration into the mystery behind the appearances of things.

Many artists inspired her: Diego Velázquez, Julia Margaret Cameron, Sally Mann, etc. Like any skilled composer, she would experiment with variations on the work of other artists and then use what she learned to effectively convey her own vision. But all the while, there was the gratitude she had for her models who helped make it all possible. Her last installation, ‘My heart—still full of her’, was a dedication to her models, especially Olympia. A lot of fuss was made about the images of Olympia in the series ‘Play’ and the images were removed from her website to wait out the hysteria. It always saddens me when media hype obscures whatever discussion might have organically emerged.

Poli was always quite generous and frank in her letters and notes to me. Communicating back and forth made me realize how shallow and dimensionless most people are and that is the first time I got the feeling that “artists are my people”. She was also surprisingly frank about her illness and would offer updates about the latest tests or when the cancer had progressed. The ironic thing was that she took such good care of herself and observed a vegetarian diet; she was simply dealt a bad hand and did her best to get the most out of what time she had left. She was always mentioning books—both fiction and non-fiction—and films she would watch with her kids. And although she hated the bother of traveling around for exhibitions, she did love visiting Europe with her family.

In 2012, when Poli’s disease took a turn for the worse, I wanted to make sure she knew what regard I had for her and that is when I made the post ‘Artists are People Too’ so she would be able to see it in her lifetime. Her husband Robert was instrumental in answering questions whenever Poli was incommunicado. I had asked her if she would prefer I make no reference to the cancer, but she said people would learn of it anyway and she did not want to appear to be hiding anything. Nonetheless, in public exhibitions she did not want viewers focusing on her condition. When she became too weak to walk and stand, she had to be wheeled around. She would always make sure she was seated in a regular chair when the public came to see her; she looked perfectly healthy otherwise and so no one really suspected. When she first told me about her latest exhibition, she sent a photo of herself in a wheelchair next to one of her “notorious” images. I commented how strange it was to see her like that and it was heartwarming to realize that she was able to let he hair down with me. But I did still get the feeling that she was keeping me at arm’s length: never wanting to speak on the phone or inviting me to visit. In retrospect, maybe the slight detachment allowed her to he get things off her chest that she would not want to burden close friends with.

To my own surprise, Poli made sure I was sent media kits of most of her exhibits and I even got a couple of interesting Christmas cards. They were photographic, of course and Olympia and Solomon got to design the composition for two of them. I felt really honored to be included like that and I have a special shelf where I display all my Poli materials.

It was a real privilege to be in on the artistic process. I would often be treated to test images for a series that had not yet taken shape and a little explanation of her thought process. One image that finally appeared in ‘My heart’ I had seen several times. The photograph was produced in the style of Julia Margaret Cameron, but when Poli first took it several years ago, she was not sure how she would use it. Later, she sent another version. 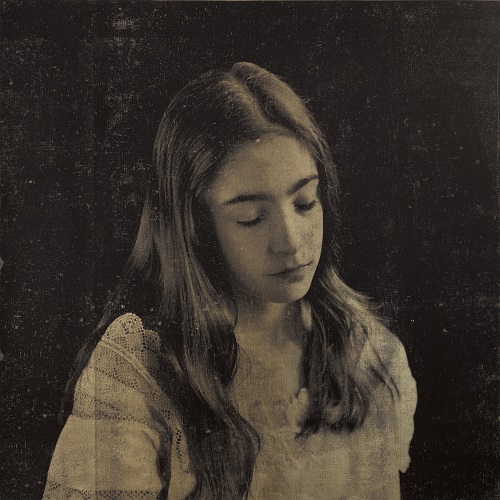 Polixeni Papapetrou – My Ghost from ‘My heart—still full of her’, 2018

I’m making some new pictures from the archive including self portraits, silk screened on linen using gold foil. It’s very difficult to capture the look in a pic as it has to be seen physically. Polixeni Papapetrou in a personal note, 2016.

The final title, My Ghost, is quite apropos as I suspect this one has been haunting her for a while.

There are still a few loose ends and so I can assure readers that the Poli story is not over. Toward the end, although I wanted to stay in touch about her latest exploits, I did not want to put any further demands on her already waning strength. But in her last couple of messages I was told that a publisher was interested in making a book dedicated exclusively to Poli’s work and life. I will be following up on that and informing readers when I learn more.

Things really should have stopped after our first initial pleasantries but whenever one of us saw something interesting and relevant, we would pass it on followed with some discussion. Now when I see something and think, “Oh, I should share this with Poli”, I will be struck by the cruel reality that there will be no more sharing. Good Bye, Poli! -Ron