Kevin Peterson was born in 1979 in Elko, Nevada. The artist’s family moved around a lot during his childhood before finally settling down in Sherman, Texas, where he studied art and psychology at Austin College. He received degrees in Fine Art and Psychology in 2001 and after graduating pursued a career in social work. However, drugs and alcohol soon became part of his life, which lead to his arrest and the loss of his job. It was during his time in a drug and alcohol treatment facility that the painter rediscovered his interest in creating art and decided that it would be his new career. 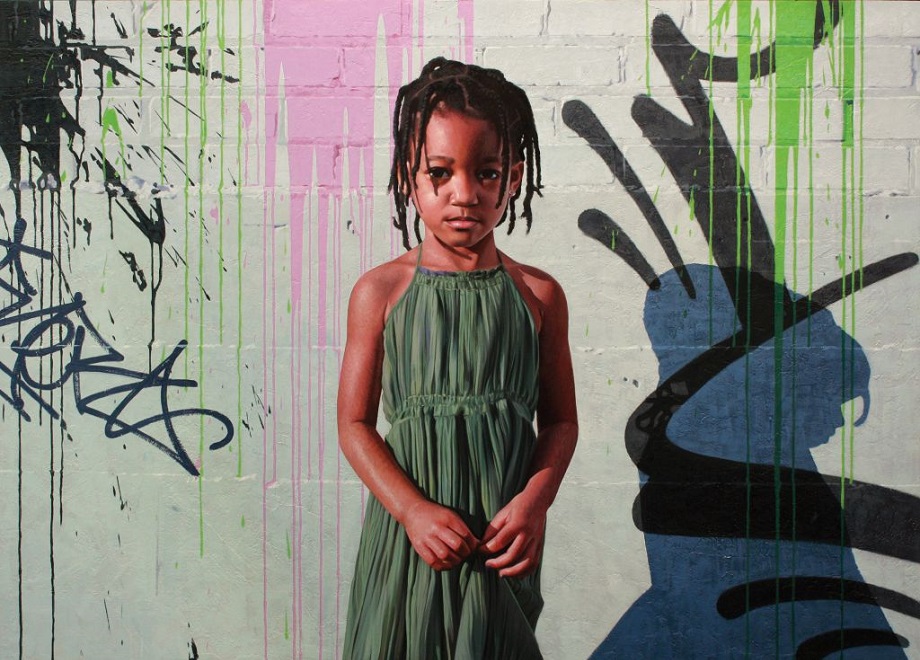 Most of the paintings that Kevin creates feature a child set within a broken urban landscape, which is in various states of decay. While a smaller number of images focus solely on the animals or other features located within these cities. His early works were more portrait like, with the focus being almost entirely on the child. The background and surrounding landscapes, in these early paintings, lacked detail and in many artworks the subject was standing in front of a wall. 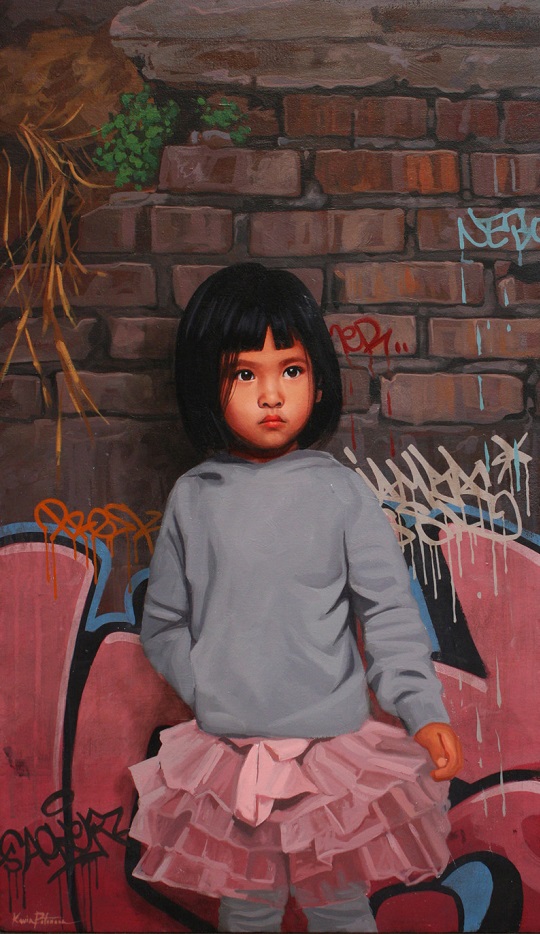 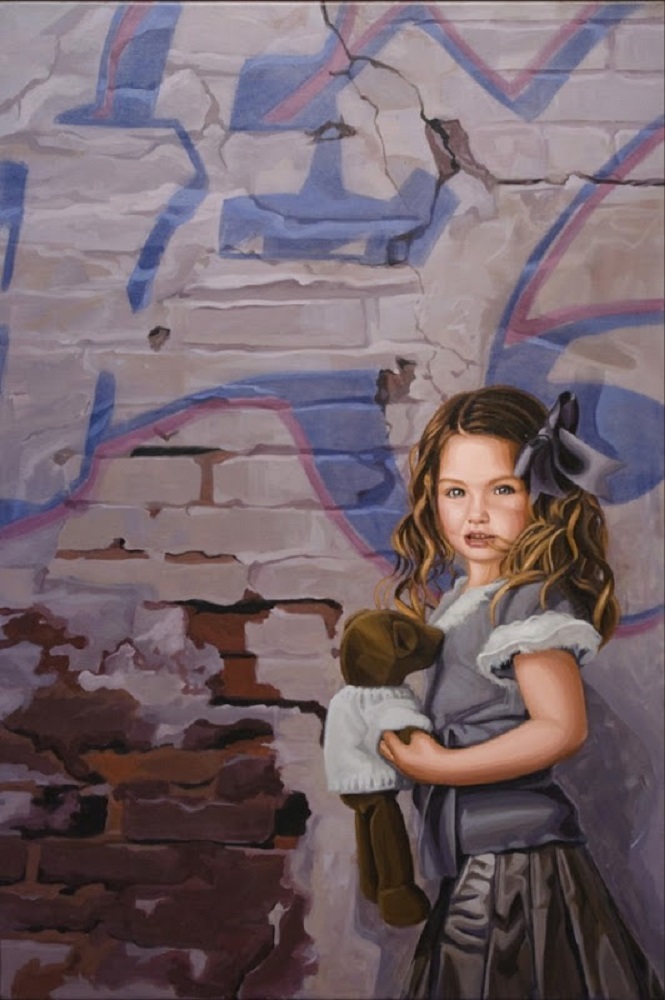 As his work progressed over the years the backgrounds started to become more detailed, the animals appeared and the child became less of the focus. Additionally, all his years of experience show through as the images go from merely looking realistic to looking hyper-realistic. You also notice that a narrative occasionally appears within the newer paintings, for example, in the Funeral you can see a child holding a funeral for a dead bird. 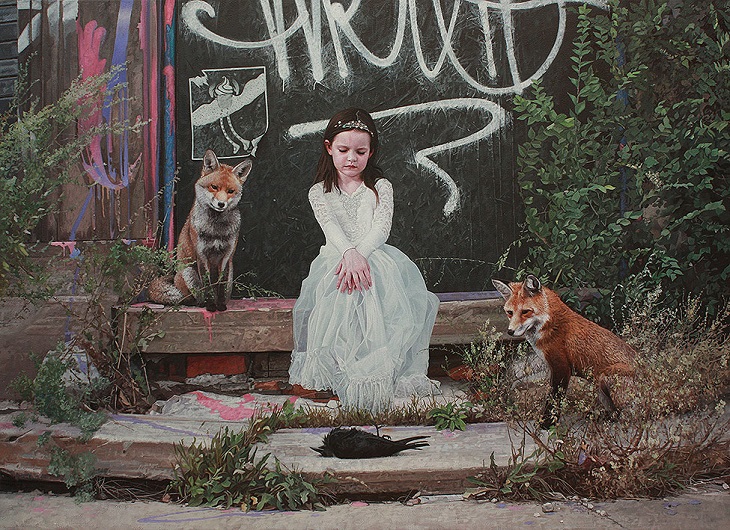 The pairing of an innocent, yet strong, child with a dark and broken landscape is a deliberate choice for the artist. The artist describes this on his website…

My work is about the varied journeys we take through life. It’s about growing up and living in a world that is broken. These paintings are about trauma, fear and loneliness and the strength that it takes to survive and thrive. They each contain the contrast of the untainted, young and innocent against a backdrop of a worn, ragged, and defiled world. Support versus restraint, bondage versus freedom, and tension versus slack are all themes that I often visit. My work deals with isolation, loneliness and longing teamed with a level of optimistic hope. Issues of race and the division of wealth have arisen in my recent work. This work deals with the idea of rigid boundaries, the hopeful breakdown of such restrictions, as well as questions about the forces that orchestrate our behaviour. 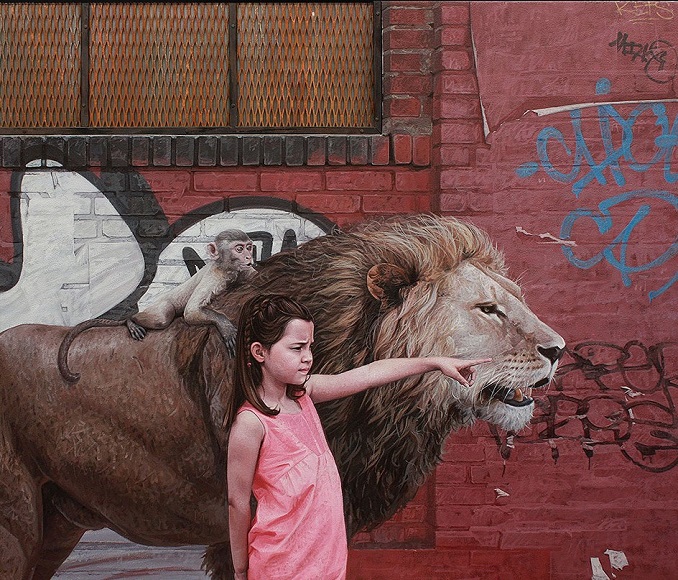 When Kevin creates his paintings he uses photographs as a reference and has a large stockpile of images, mainly featuring urban landscapes. The artist also has a collection of images for the humans that appear in the artworks, most of which have been photographed in his own studio. He then uses Photoshop to piece these individual images together to get the look of the final artwork and then it is just a matter of painting it on the canvas. A process that takes many hours and layers of painting with many works taking about 100 hours over several weeks. 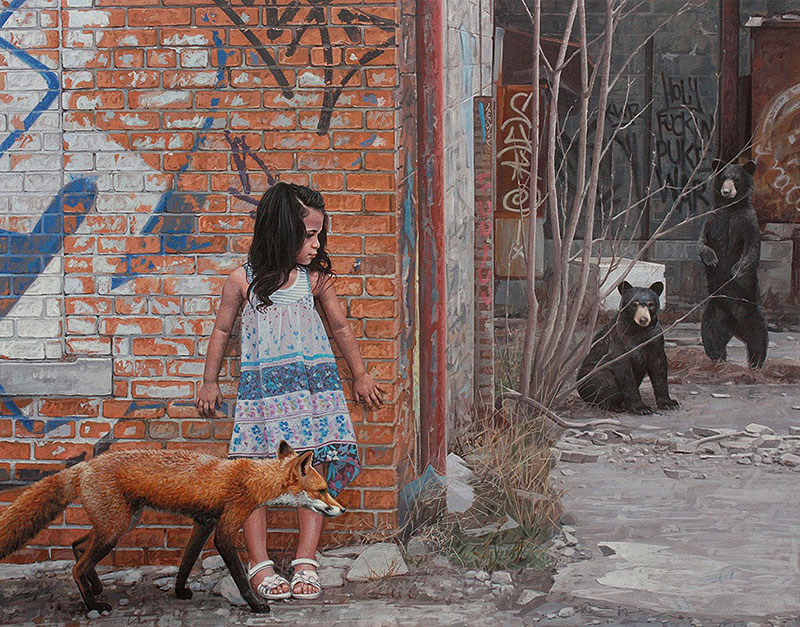 When I first looked at Kevin’s early images I soon got the feeling of familiarity, especially with this painting. 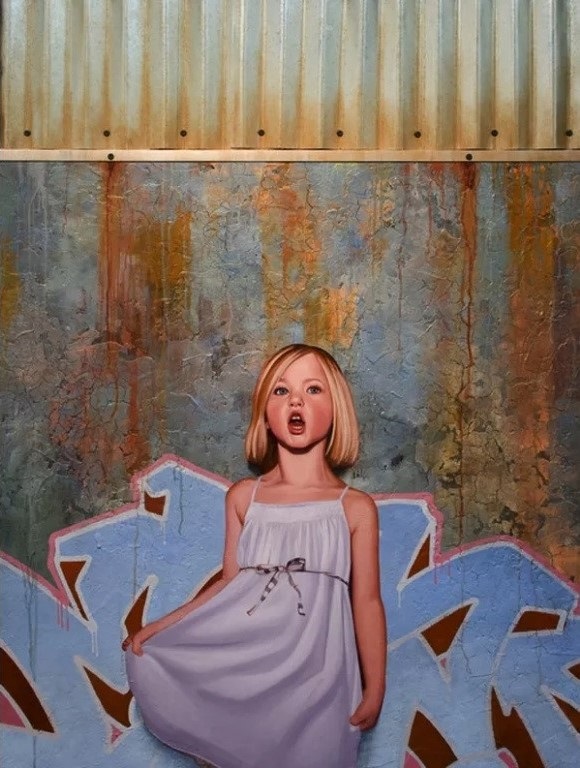 I soon found the original photograph that was used as the model for the artist’s image. 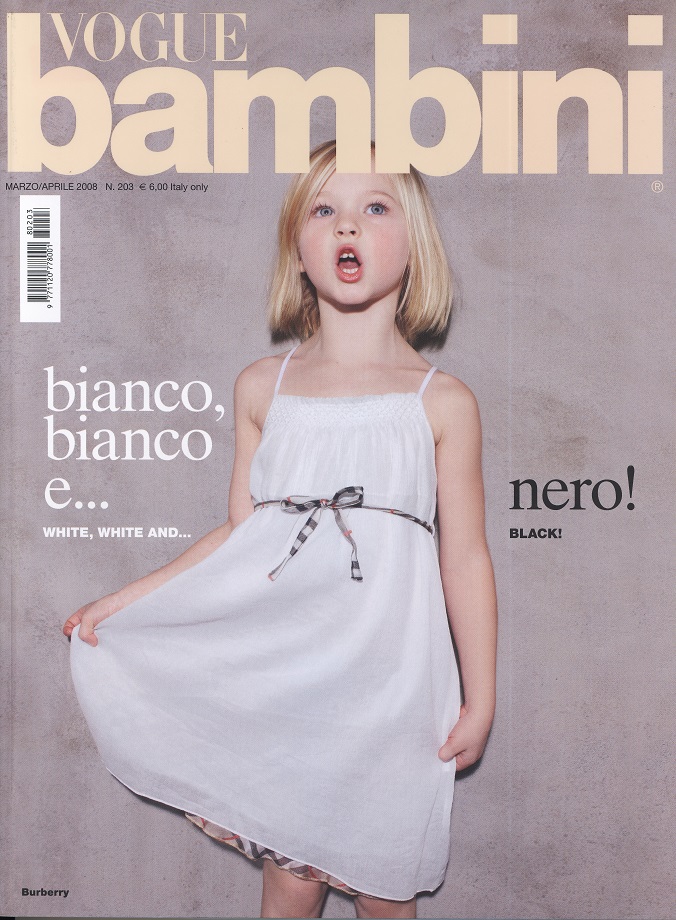 So it appears as though the artist was using magazine images to model his early paintings on, probably because he had no money to pay for models and no friends with children who could voluntarily model for him. It is also possible that he really liked the photos and simply wanted to show his appreciation to the original photographers by making his own interpretations of their images. I think he has made some good decisions when choosing what images he uses. Anyone recognise this? 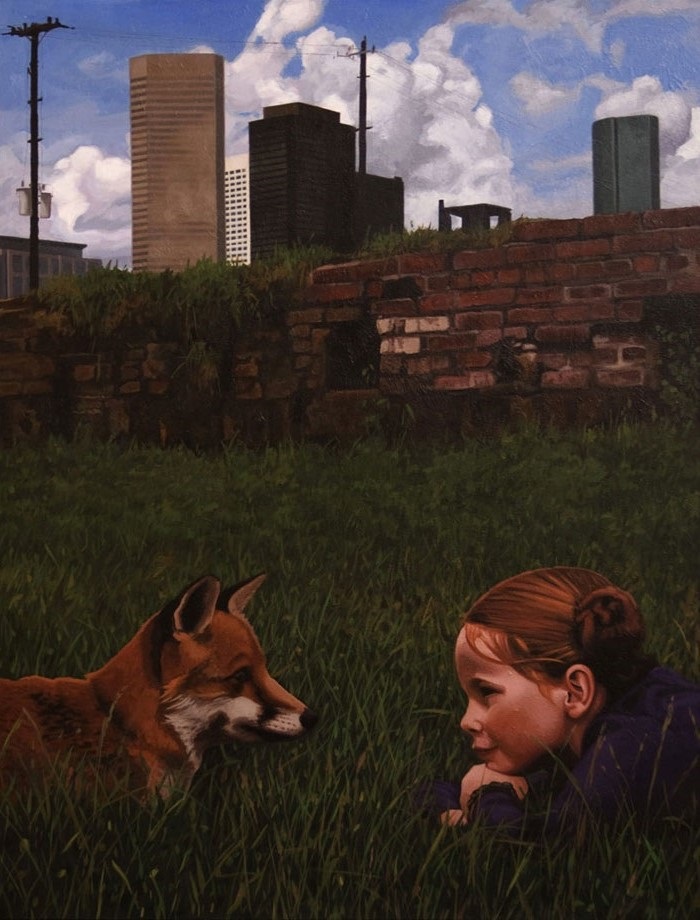 The original image happens to come from one of my favourite movies. 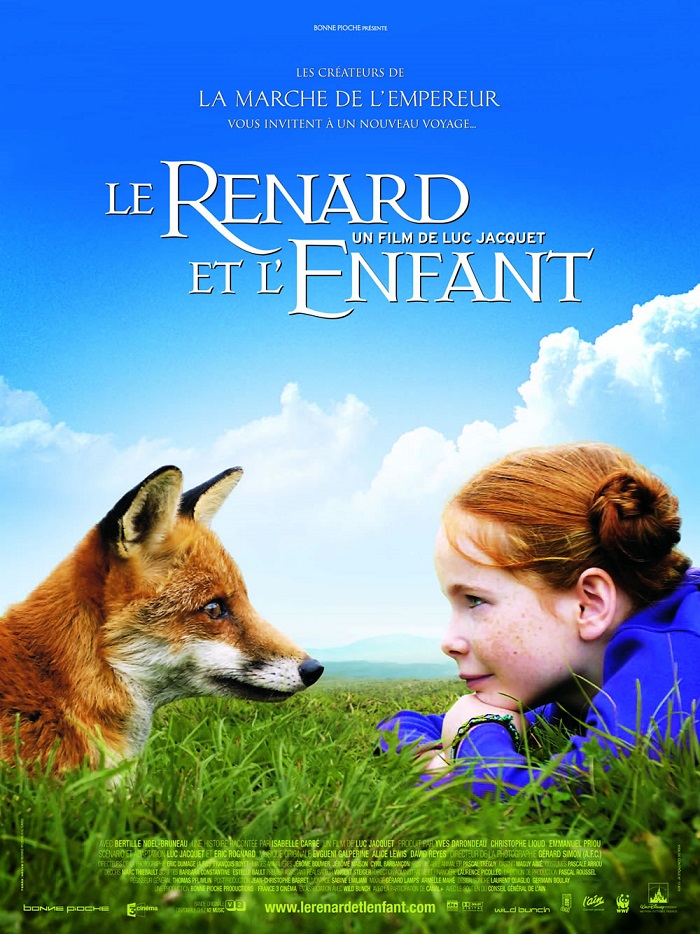 I have not contacted the artist so it is not known if he has received permission, to use these images, from the original creators. If he hasn’t there may be some copyright implications depending on which law you attribute to them. There are many possible laws that can be used here, most likely U.S. copyright law would be applied or, less likely, the Berne Convention, which deals with copyright on an international basis. As the photographs appear to be created in Europe the copyright laws of the individual countries, in which the original photographs were created, may also be used. Using previous cases as an example we can see that the U.S. laws are completely inadequate at preventing unauthorised use of images and instead favour freedom of expression. An artist can make the tiniest change to an image, in Kevin’s case it is changing the background, and this would have enough of a transformative effect to prevent any lawsuit. Richard Prince is a perfect example of this law. He has made a career out of using other people’s images, making tiny additions to them, which transforms them into his own artworks. One of his most recent exhibitions, including the anger it created, is detailed in this article. However, a successful prosecution, for unauthorised use of an image, can be seen when the estate of Jean-François Bauret successfully sued Jeff Koons. French Copyright Laws were used in this case and it should also be noted that this situation was first mentioned on the Pigtails in Paint website. As I am not an artist I am unaware how common this occurrence can be, though this article implies it is frequent as it describes how Bill Gekas has been copied … again. 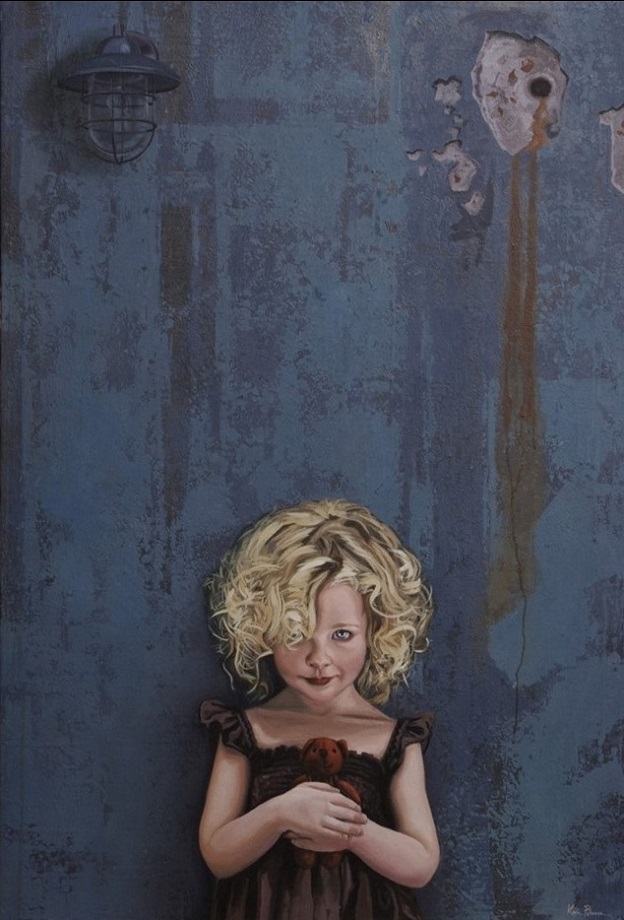 Kevin currently works out of Winter Street Studios, in Houston, Texas, and sells his works through Thinkspace Galleries.

1 thought on “The Hyper-Realistic Art of Kevin Peterson”