Today, Pigtails in Paint is 7 years old.  And thanks to a multitude of guardian angels, it has managed to survive this long bringing attention to a most valuable part of our society, a part that is all too often taken for granted.  Seven is not generally regarded as an important milestone in an enterprise, but given our subject matter, it is an age when a girl is arguably at the height of her charm: she still has the youthful animal spirits that conveys an intoxicating zest for life and yet, has developed sufficient language and intellectual capacity to be an engaging companion.  Below are a few original and historical pieces commemorating this very special anniversary.  -Ron

The first is an original work in the form of an acrostic by Pip Starr who also composed the image for this occasion. 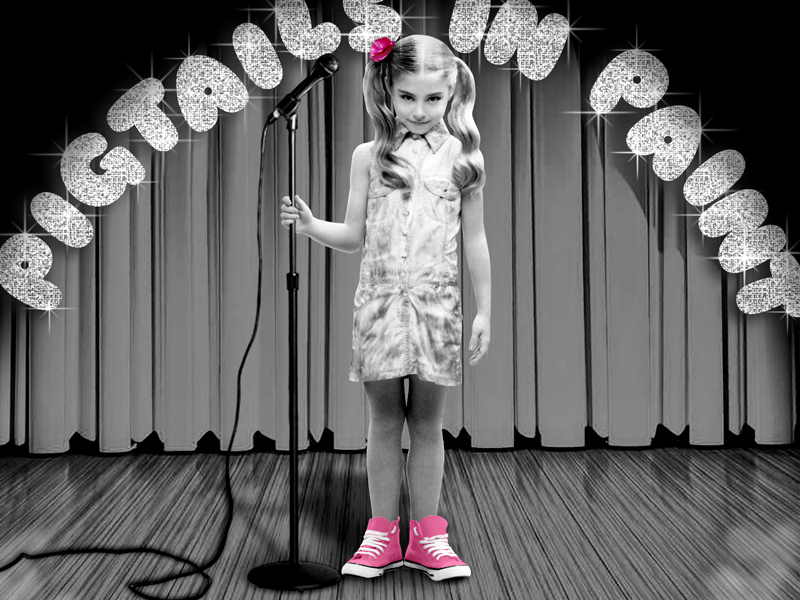 Heaven above opened one wintry night
And birthed an infant on a beam of light,
Presented us with girlish genius,
Placed in our hands the key that would spare us
Years hence from mediocrity and shame,
Bestowing on the world a righteous flame
Invested with the power of her kind–
Revealed to all, she could not be confined!
Today we celebrate her seventh year,
How, counter to the odds, she still is here
Displaying for the world her many charms
And talents: welcome her with open arms!
Yet even now she giggles as she stands,
Pigtails and all, before her doting fans.
It cannot be denied this child has strength,
Given enemies go to great length
To silence her, to make her go away,
And still she’s here to taunt them to this day.
If any man should doubt her bravery;
Lest any view her as unsavory,
She has the answer to all disbelief
In moments such as these, so scrap your grief.
Now picture, if you will, this simple scene:
Present before us is a stage serene.
A spotlight shines down, and she enters there
Into the light, our angel sweet and fair;
Not seconds in, with impish grin, does she
Take off her dress and cry aloud, “I’m free!”

And how about a couple of songs about girls of the celebrated age to mark the occasion? First, Seven Years by Norah Jones. Then, Childhood Dreams by Trans-Siberian Orchestra.

As many readers may already know, Graham Ovenden was pleased with Pigtails’ coverage of his recent trial.  He learned of our impending anniversary and generously contributed this original poem, fresh off the presses. 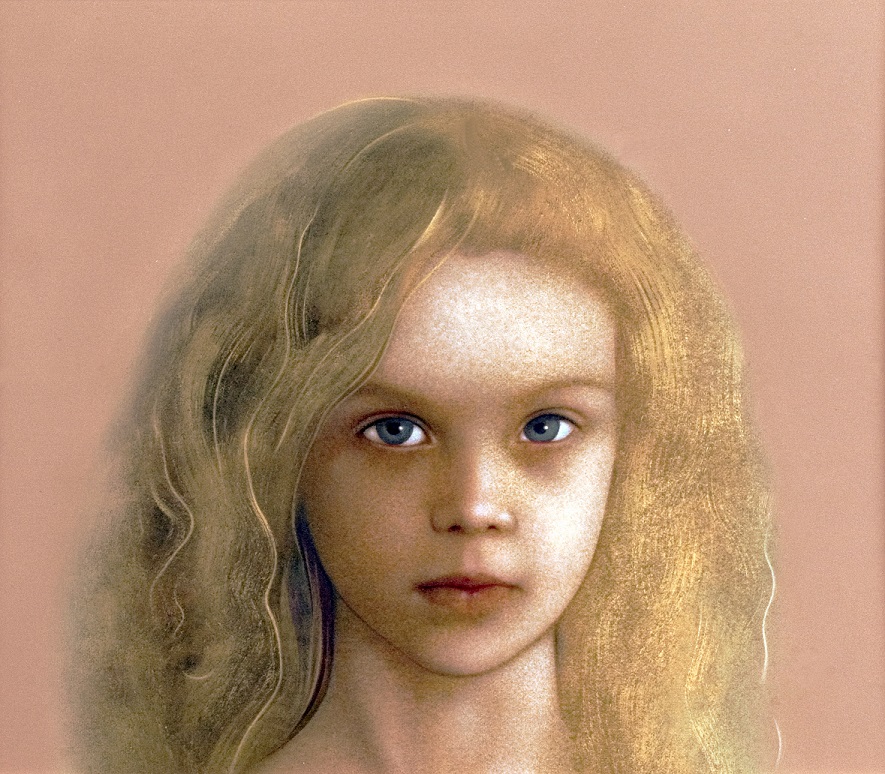 A FATHER TO HIS SEVEN YEAR OLD DAUGHTER

I look on you and marvel at your gift
so grateful given through our love.

You grow, the image of our dearest care,
a child both gentle as an angel fair
but equal, strong, determined as the fancy take
to fight all foes invention make.

Like flowers dancing in the air
or tree tip tops; their rhythms share
your gift of childhood’s grace …
Then turn the wild winds to a solemn pace.
Yes, follow on in Pan’s domain
cloaked by a cloth of leafy train.

A child of nature you have grown—
as yet no Earthly strife or passions shown
that turns your mind to Mammon’s lies …
Cloud Castles where the skylark flies
is your domain.

(Let ranting prophets keep their shame).
For innocence is held by you;
a sacred trust, both loving, true.

The accompanying image is from an original painting in oil on paper.

The next contribution is from Christian, whom you can thank for even having this commemorative post at all.

Mac Harshberger – illustration for “The Birthday” in The Singing Crow (1926)

THE BIRTHDAY
To Julie Bridwell

JULIE had a birthday,
Mother made acclaim;
Seven soulful candles
Waved their flags of flame.

Ferryboats were tooting,
Trying to be sweet;
Sets of verses scooted
Down from Henry Street.

This poem was printed in The Singing Crow and Other Poems published by Albert & Charles Boni, New York (1926) and illustrated by Mac Harshberger.

Graham Ovenden being an avid purveyor of literature also had a couple of suggestions for poems that fit the sevens theme.

THE SEVEN AGES OF GIRLHOOD

At Two, she is a tiny lass,

And Joy she scarcer knows from sorrow;

She scarce consults her looking-glass;

She has no thought of sad to-morrow!

At Four she is a merry maid,

And looks on aught but play as folly;

That only sawdust is her dolly.

At Eight, her troubles come in scores,

For oft she is perverse and haughty;

A pouting puss in pinafores—

Who’s sometimes whipped when she is naughty!

At Twelve, she is a saucy teaze,

Her petticoats scarce veil her knees,

At Fifteen, she’s the pearl of pets,

And feels assured her pow’r is strengthened;

Are hidden when her skirt is lengthened.

At Sixteen, she’s the sweetest sweet,

And dresses in the height of fashion;

In earnest for the tender passion.

At Eighteen, p’r’aps she may be sold

She’ll either sell her heart for gold—

Or give it for a golden fetter!

This poem was published in a collection called Boudoir Ballads (1876).  Although many poets have written about young girls, Ashby-Sterry distinguished himself by dealing almost exclusively with them.

THERE ‘S no dew left on the daisies and clover,

There’s no rain left in heaven;

I’ve said my ‘seven times’ over and over,

Seven times one are seven.

My birthday lessons are done;

The lambs play always, they know no better;

They are only one times one.

O moon! in the night I have seen you sailing

And shining so round and low;

You were bright! ah, bright! but your light is failing—

You are nothing now but a bow.

You moon, have you done something wrong in heaven

That God has hidden your face?

I hope if you have you will soon be forgiven,

And shine again in your place.

You’ve powdered your legs with gold!

Give me your money to hold!

That hangs in your clear green bell!

And show me your nest with the young ones in it;

I will not steal them away;

I am old! you may trust me, linnet, linnet—

I am seven times one to-day.

This poem is the first Canto in a much longer poem appearing in Poems by Jean Ingelow Illustrated published by Longmans, Green, Reader & Dyer (1867) and illustrated by Arthur Boyd Houghton.