There is no shortage of controversy these days over artworks featuring nude and/or eroticized children. Quite often these turn out to be massively overblown, and more often than not the “erotic” aspects of said art are purely in the eye of the critical beholder. But at least in most of those cases the art does feature an actual child. Recently a painting by Pre-Raphaelite painter John William Waterhouse, called Hylas and the Nymphs, was removed from display at the Manchester Art Gallery in a blatant attempt to create controversy where none previously existed.  This was supposedly done in order to “encourage debate” about the way the female body is represented in relation to the male gaze or something.  It’s not hard to see where this is going, right? 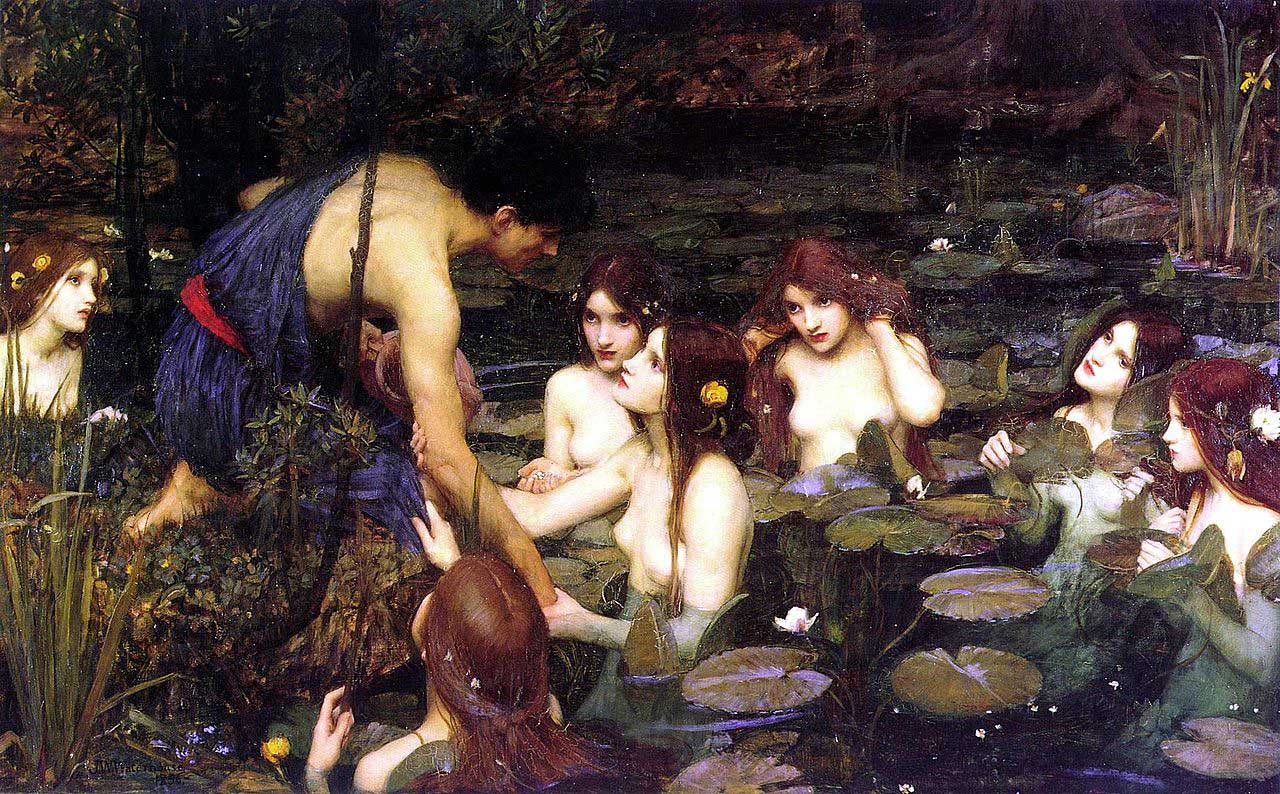 This publicity stunt was in fact prompted by an actual controversy over Balthus’s painting Thérèse Dreaming (which does feature an underage girl in a somewhat provocative pose) at the Museum of Modern Art in New York.  Mia Merrill was the person who formally objected to the work, arguing that the Met was, “romanticising voyeurism and the objectification of children.”  On those grounds she presented the museum with a petition containing over 8,000 signatures in order to pressure the Met into removing the work.  To its credit, the museum refused to bow to such political concerns, and the work was left alone.

Nevertheless, this convinced Clare Gannaway, curator of the Manchester Art Gallery, to remove the Waterhouse painting temporarily.  Her reasoning was thus:

It’s not about saying these things can’t exist in a public gallery – it’s about saying, maybe we just need to challenge the way these paintings have been read and enable them to speak in a different way.

In other words, her plan was to generate some sort of larger cultural reaction to art on the whole, a #MeToo-like movement where we collectively reassess the youthful female form in art and shed light on how we have long taken for granted the male exploitation of the female form.  Now, I have no problem with challenging the paradigmatic conception of femininity in art, but the proper way to do that is not to play moral panic games with the public by introducing a pseudo-controversy into the dialogue.

People were asked to comment on this state of affairs, garnering predictably mixed results, with one or more of the commenters noting some supposed pedophilic aspect to Waterhouse’s portrayal of the nymphs.  Says Chris Taylor:

Not one of your correspondents seems to want to directly address Hylas and the Nymphs’s subtle, but surely unmistakable, paedophilic content. I can understand why the male spectator finds a peculiar difficulty in broaching this – there are always problematic moral considerations of the direct imputation of taboo motives for that male gaze (however expressed). But what of the female spectator’s gaze? Having lectured on British and French 19th-century art for many years, I have always been struck by the extraordinary art critical silence in discussing the ways in which paedophilic desire is often embodied in that century’s depiction of the female nude. Or have I simply misunderstood – is it the case that paedophilic desire did not exist before the 20th century?

It’s interesting that Taylor points out the painting’s unmistakable pedophilic content, since to my knowledge no one had, until this point, recognized it in any explicit way, or else every single viewer who saw it just ignored that part of it.  Or, could it be that it simply isn’t there?  As per usual, the modern feminist critic’s definition of pedophilia is very different from the clinical definition, which limits it to desire for prepubescent children only.  Whereas Waterhouse’s nymphs are, at the very youngest, 15 or 16 (with 16 being the legal age of consent in the painter’s native England then, as now).  While these nymphs are certainly young, as nymphs are traditionally meant to be, no one could accuse them of being prepubescent.

Nor is the context particularly exploitative or suggestive of pedophilia.  Far from being some sly old lech attempting to seduce a naive young girl, Hylas is himself clearly a youth, beardless and, from all appearances, rather reluctant to be pulled into the nymphs’ watery domain.  If anything, it is the females who appear to have the sexual upper hand here.  They outnumber the boy seven to one, and they are obviously the seducers, not the seducees.

But perhaps the biggest problem with Gannaway’s attempted attachment of the male admiration of the young female body in art to the #MeToo phenomenon is that it in fact minimizes the horror of actual sexual assault by muddying the waters with something much more innocuous, the flip side of which is a dangerous conflation of fantasy and reality in this era of “alternative fact.”  This was a badly conceived thought experiment that should have been nixed at the brainstorming stage.  If we’re lucky, this will be a minor blip soon forgotten.  Unfortunately, it may have as yet unseen repercussions which could conceivably do real damage to the art world before cooler minds prevail.

6 thoughts on “Nymph or Nymphet: John William Waterhouse and the Ever-Shifting Definition of Pedophilia”