For a Renaissance Man, an acrostic is an irresistible pastime. It combines the qualities of a puzzle with poetry and so draws on one’s intellectual and creative faculties.

To me and, I expect, many other readers it must have appeared that Graham Ovenden disappeared from the face of the Earth after publishing his last well-known books in the 1990s. I was intrigued by a title I had not seen before owned by a serious collector who was liquidating his collection. It was Acrostics: Pictured in rhyme & colour (2003) published by Artists’ Choice Editions in Oxford. Over the years, I had met only a handful of people who knew of this work and its contents. I later learned that was because the commercial edition consisted of only 240 signed copies augmented with 24 specials and 5 “Exemplaries”. 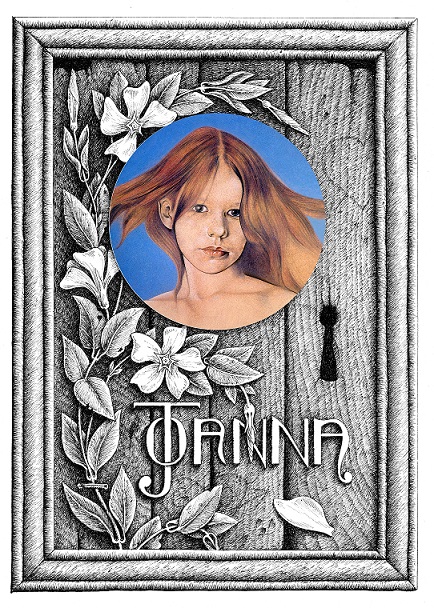 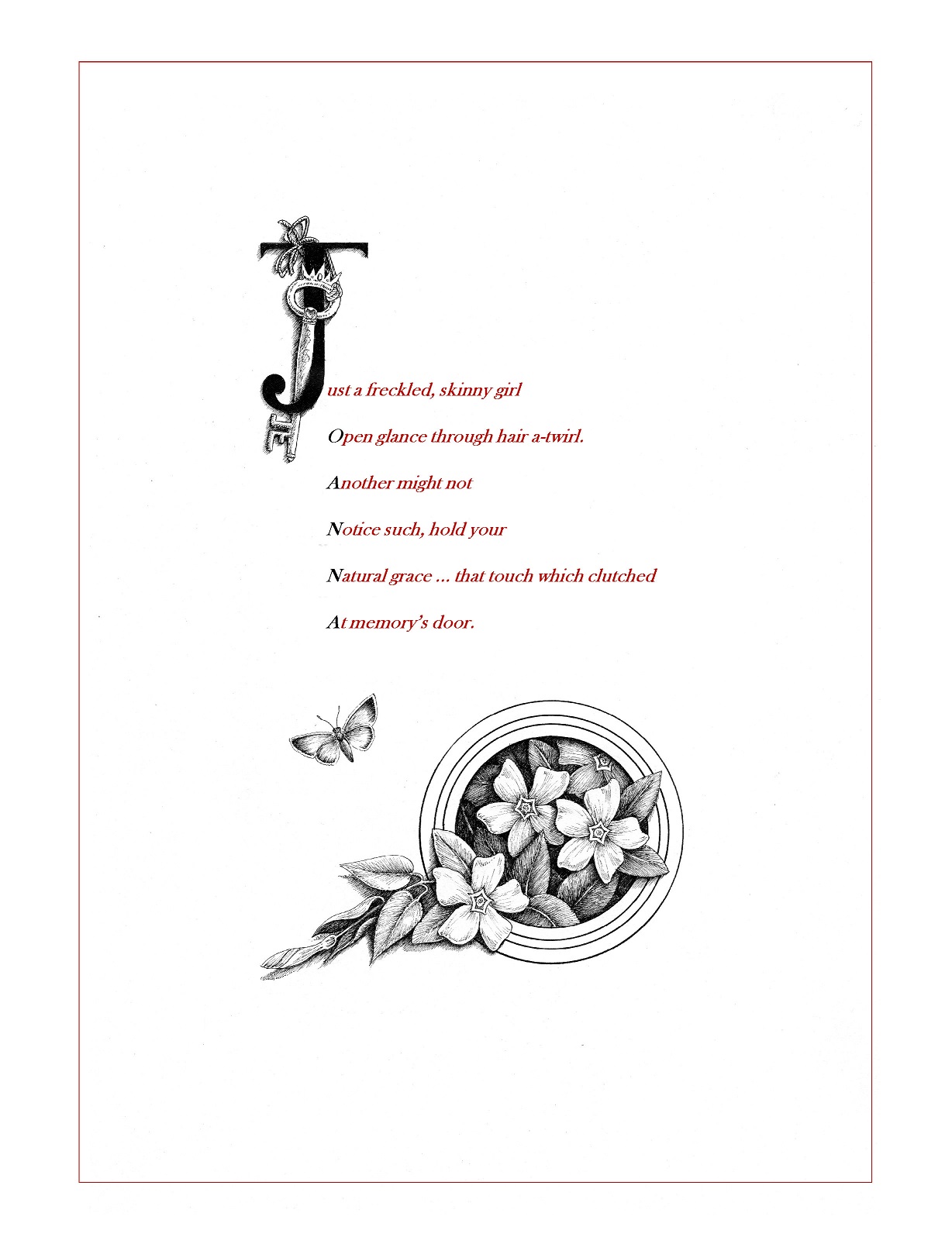 Except for ‘Anouchka’ in the Artists’ Choice Edition version, images were printed in diptych form.  I am showing most of them as individual panels to make them more legible and to show off the detail of Partridge’s work.

In the course of researching this mysterious volume and background information on the artist for his original post, I learned that Ovenden is fond of collaborating with and encouraging other artists. Accompanying the images and poetry is the excellent decorative artwork of Brian Partridge. Partridge is an astounding artist and will be featured in a dedicated post to be published soon. He met Ovenden for the first time in 1982 while visiting him at Barley Splatt for a long weekend in the company of Keith Spencer, who published a magazine called The Green Book where his drawings first appeared in print.

The first acrostics to be published were in Ovenden’s monograph published by Academy Editions in 1987 featuring Daisy and Tilly. These particular examples were destroyed in a motorcycle accident near London while being carried by a courier. 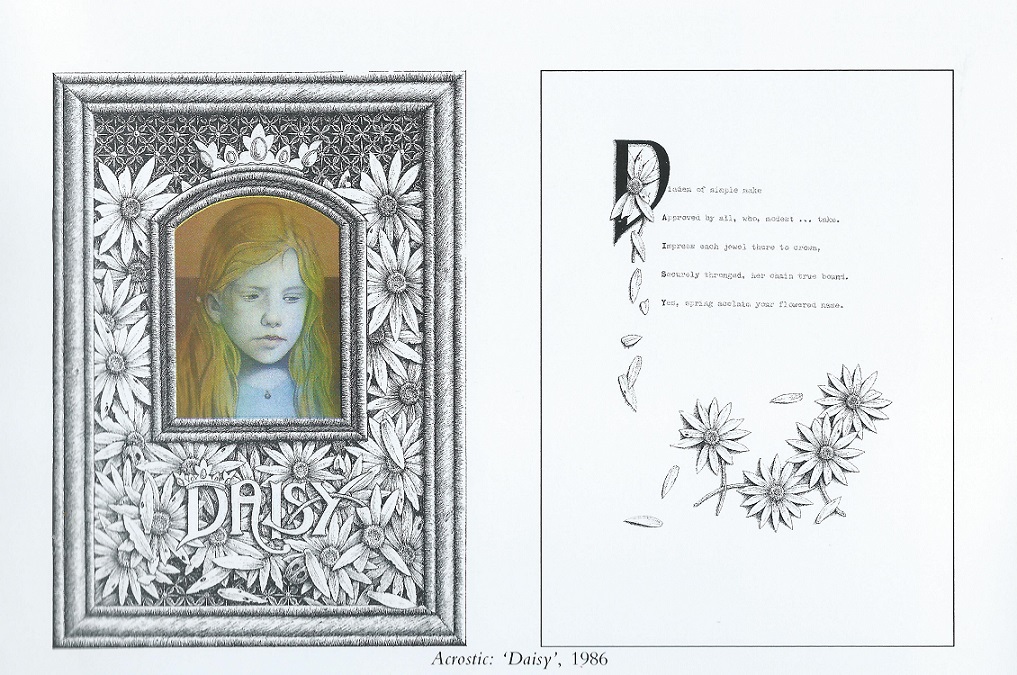 The next publication to include an acrostic from the proposed book was in ‘The Ruralists’ issue of Art & Design magazine (profile no. 23, Volume 6, 9/10 1990). This was a colored pencil portrait by Ovenden. 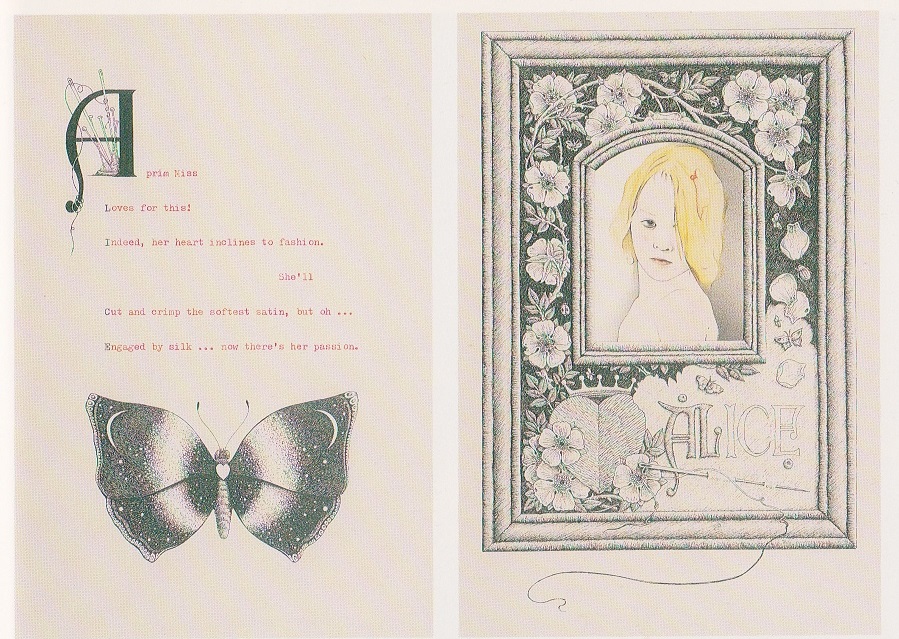 No other acrostics appeared in print until the finished Artists’ Choice Editions version in 2003. The book contains only 12 designs and accompanying text but was intended to have a half dozen more. Due to some mixup, those did not end up getting printed. The missing images did appear in the specials and exemplaries as those were hand-printed and assembled. ‘Amy’, ‘Eve’ and ‘Anna’ shown below were among the omitted items. 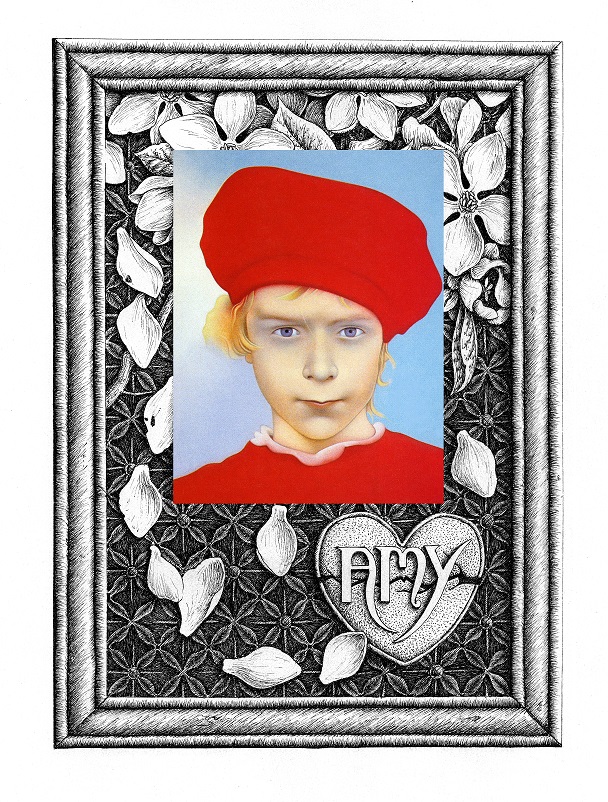 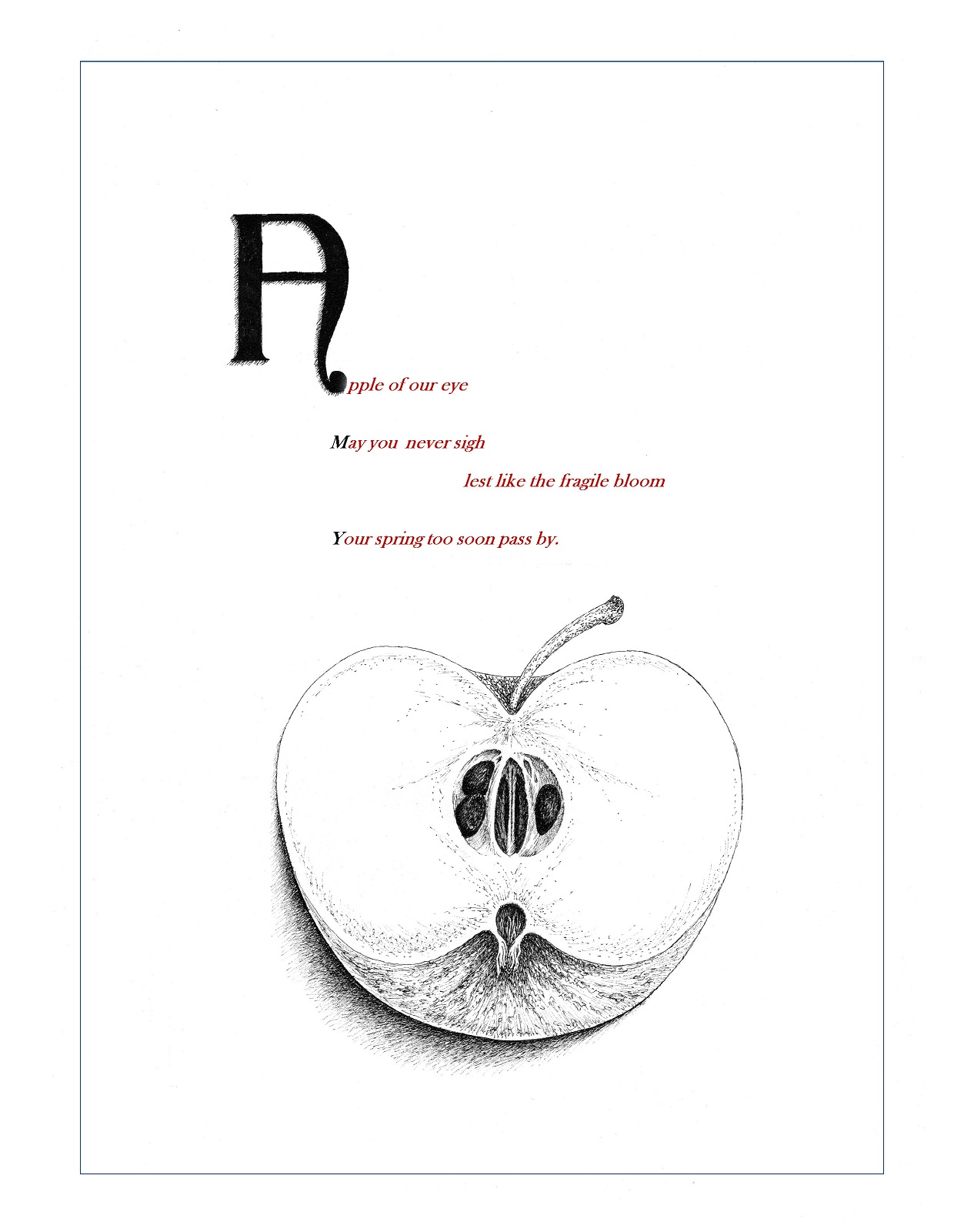 Renowned novelist Joanne Harris wrote the introduction for this book and others for Ovenden and, conversely, he illustrated one of her novels as well. Along with a brief history of this art form, she recounts a visit to Barley Splatt along with her husband and daughter.

I have been an admirer of Graham Ovenden for nearly twenty years, although we only met face-to-face in 2002, when I contacted him to commission a portrait of my daughter, Anouchka. Arriving (rather nervously) at Graham’s home, the legendary Barley Splatt, on a glorious summer’s day, my husband, my daughter and I were greeted by a serene and genial gentleman with a mischievous smile who immediately invited us to join him for a walk up the river. We accepted, little suspecting that up the river meant precisely that; a mile-long walk along the bed of a clear and fast-moving little river, while Graham, in boots, gaiters and floppy hat, glided ahead of us, impervious to rocks, brambles or the occasional stretches of deep water which soaked him to the waist. We took off our shoes and joined him; my daughter with the immediate, unquestioning glee of a puppy off the leash, my husband and I with a hesitancy that quickly—and rather to our surprise turned to pleasure.

I suspect it was a test; a means of determining if we had the spirit, the humour and the joie-de-vivre to cherish a work of art by Graham Ovenden. I suppose we passed; in any case, a few days later he presented us with an acrostic poem dedicated to our daughter, with a handwritten postscript, river-walking will never be the same again. -Joanne Harris, July 2003 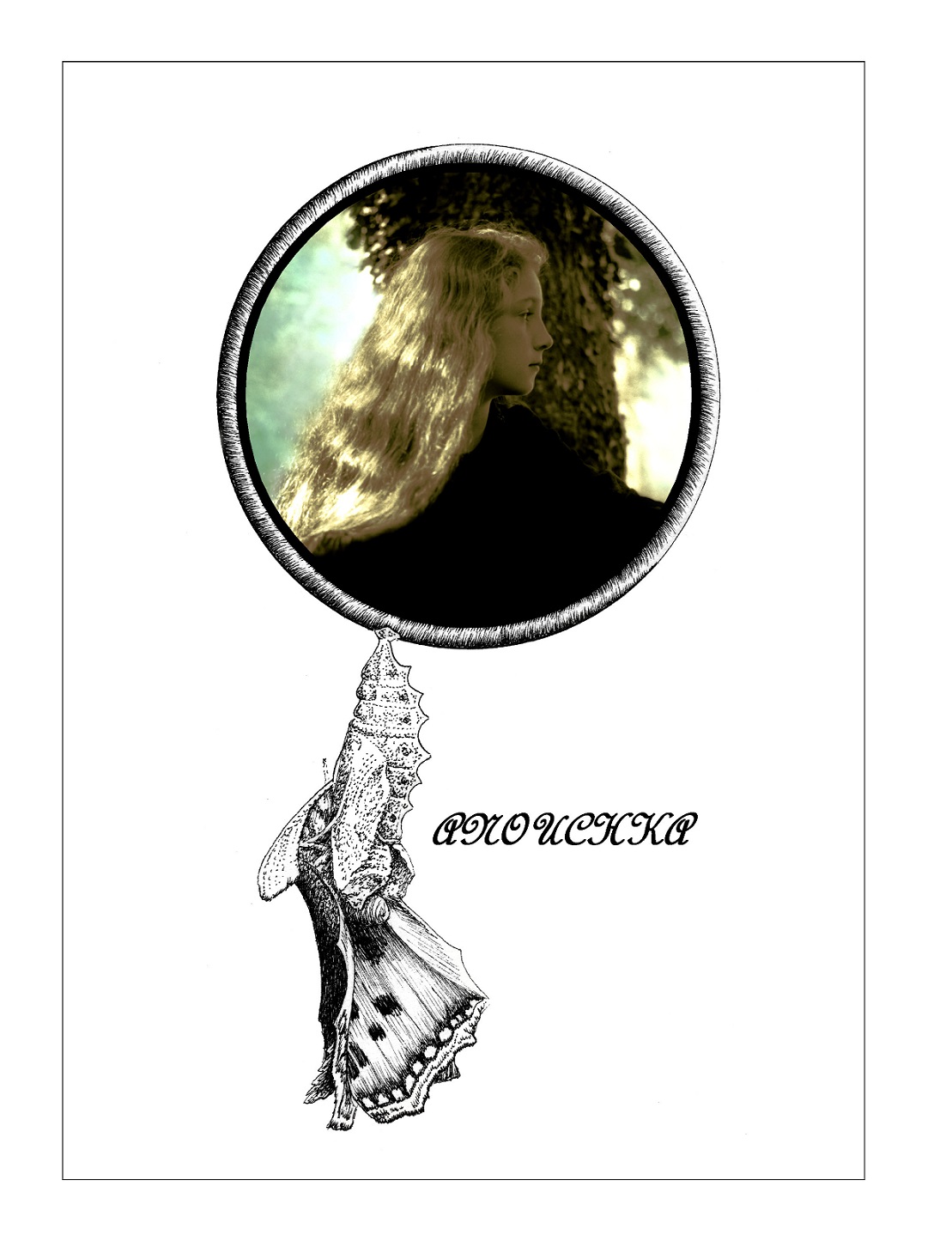 Of course, the most famous examples of acrostics familiar to Pigtails readers are those of Charles Dodgson (aka Lewis Carroll).

A boat, beneath a sunny sky
Lingering onward dreamily
In an evening of July—
Children three that nestle near;
Eager eye and willing ear;
Pleased a simple tale to hear—
Long has paled that sunny sky:
Echoes fade and memories die:
Autumn frosts have slain July.
Still she haunts me, phantomwise,
Alice moving under skies
Never seen lo waking eyes.
Children yet, the tale to hear,
Eager eye and willing ear,
Lovingly shall nestle near
In at Wonderland they lie,
Dreaming as the days go by,
Dreaming as the summers die:
Ever drifting down the stream—
Lingering in the golden gleam—
Life, what is it but a dream?

I must concur with Harris that Ovenden seems a logical and worthy successor to Carroll in many ways.

For me, it is with Lewis Carroll—and his natural successor, Graham Ovenden—that acrostic verse has the most resonance and style. Both are artists who combine a strong visual aesthetic with a deceptive, childlike simplicity. Both are unashamedly eccentric, taking pleasure in the whimsical and the grotesque. Both are chroniclers of the photographic image, with a particular sensitivity to the transience of youth and beauty.

Both have a special, almost pagan reverence for children and Nature. Both share a deep nostalgia for a golden past that has never quite existed beyond the mystic state of grace represented by childhood. -Joanne Harris, July 2003

It is hard to account for all the variations in the images. Once Partridge submited his drawings, Ovenden might trim them to better show off the particular portrait. If, in hindsight, he was still not pleased with the final result, he would make further revisions for the special editions. For example, his original concept for Eve was fairly simple. But pleased with the results of one of his paintings of this model, Tess, he decided to use that instead. 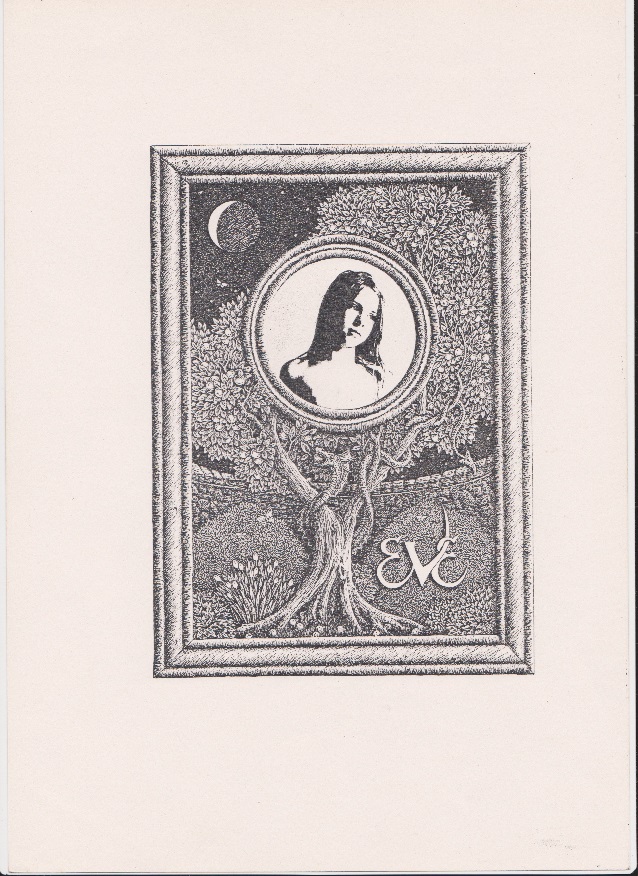 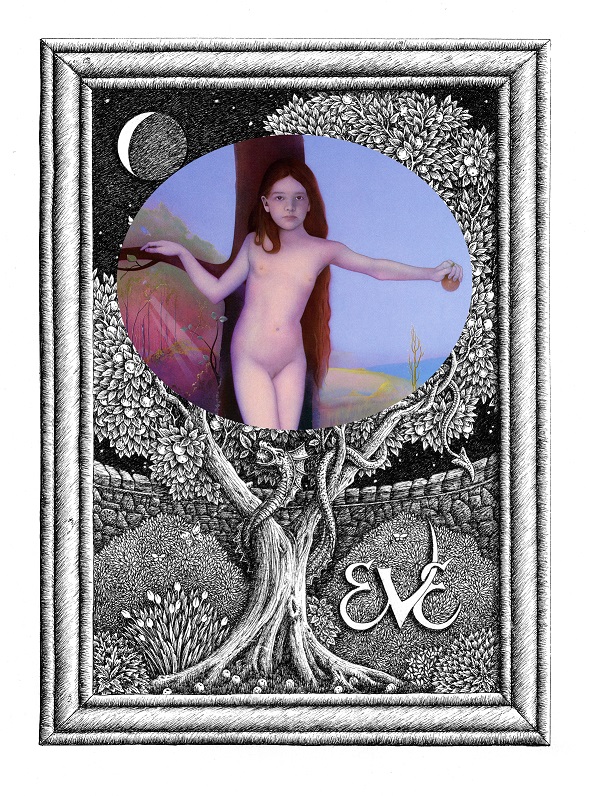 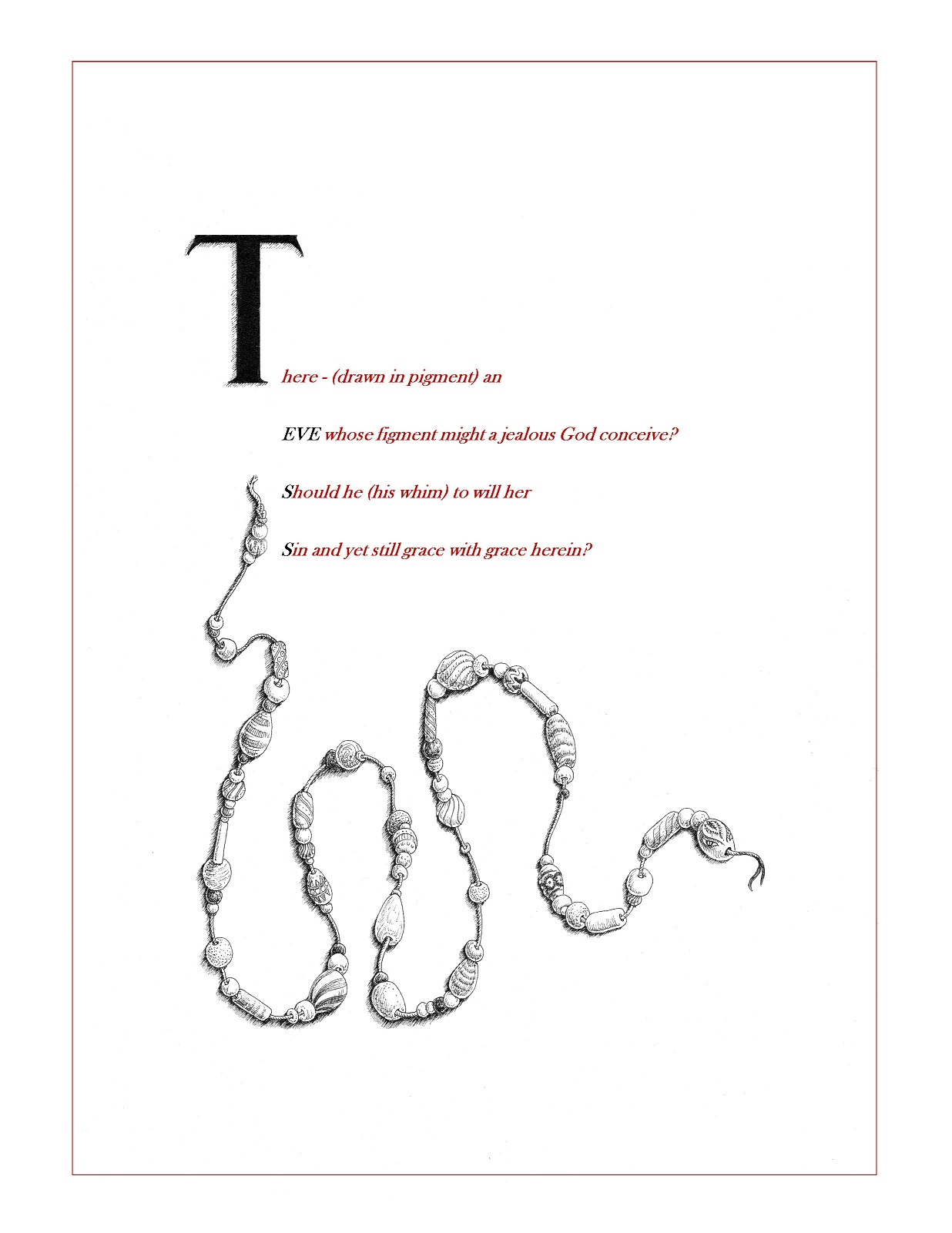 Ovenden’s original intent was to produce special drawings for each of the portraits, but this plan never materialized. Therefore, the images have a raw on-the-fly quality that reflects the creative impulse of the artist. These works were not planned from beginning to end, but were composed as the muse struck him. Thus an image could be based on almost any medium: photograph, painting, drawing or one of these modified on computer. 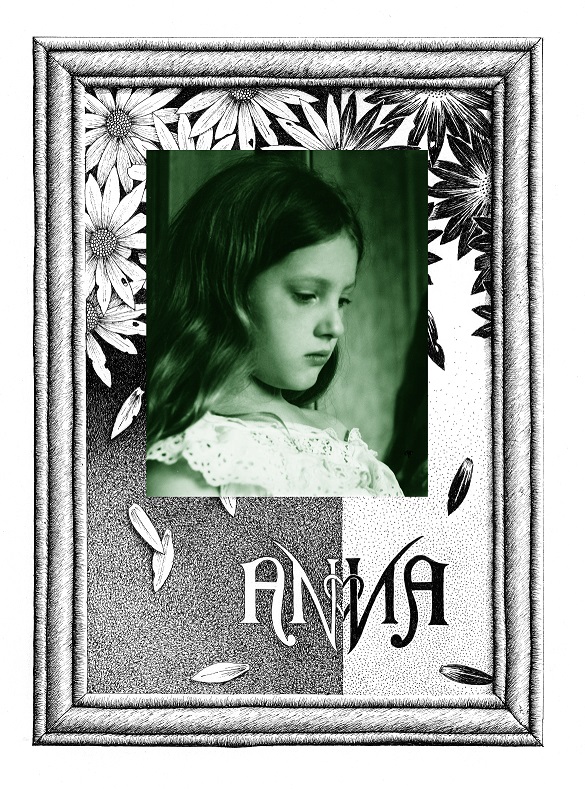 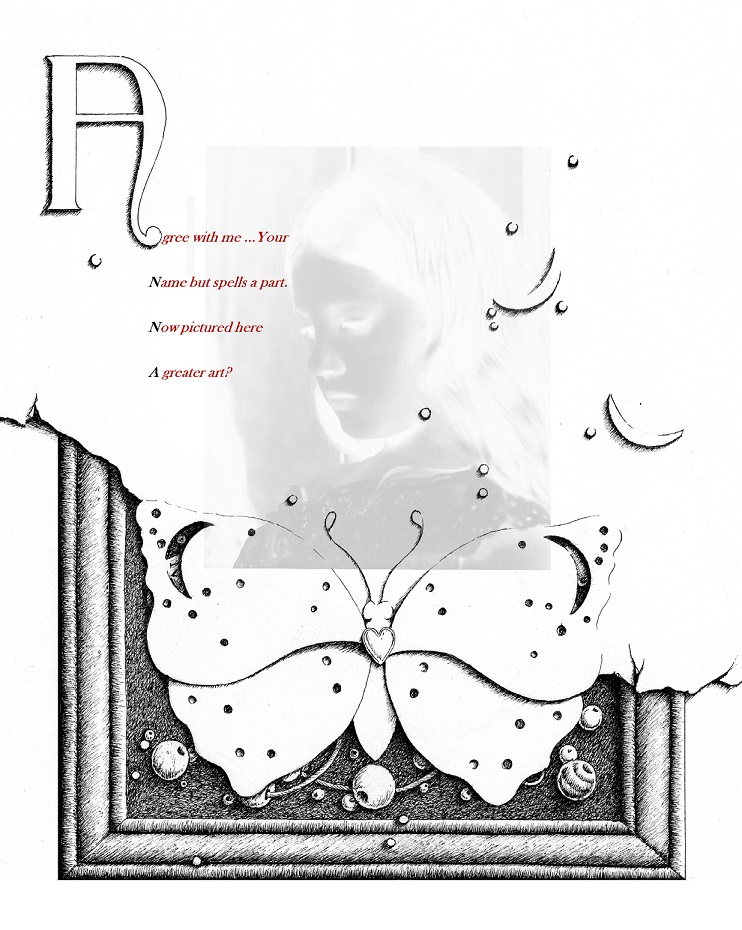 Juliette Liberty (what a wonderful name!) is Peter Blakes’ daughter. You will recognize this image from the ‘Fall from Grace?’ post. 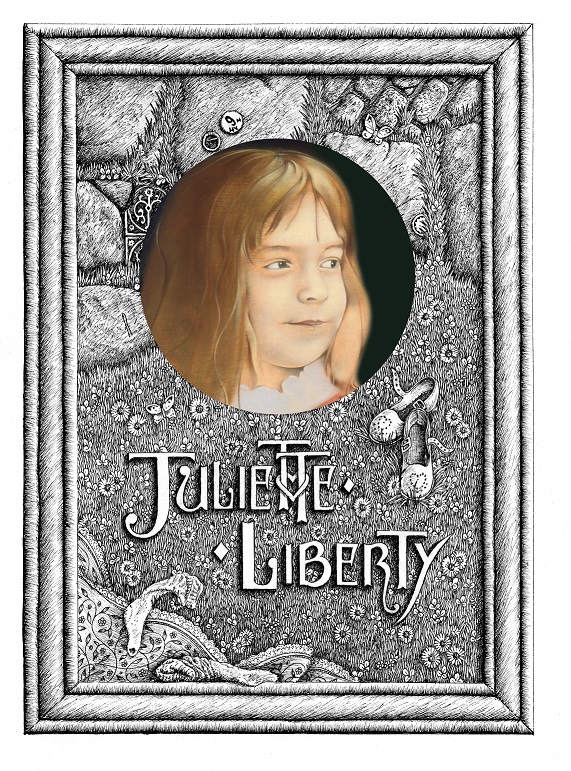 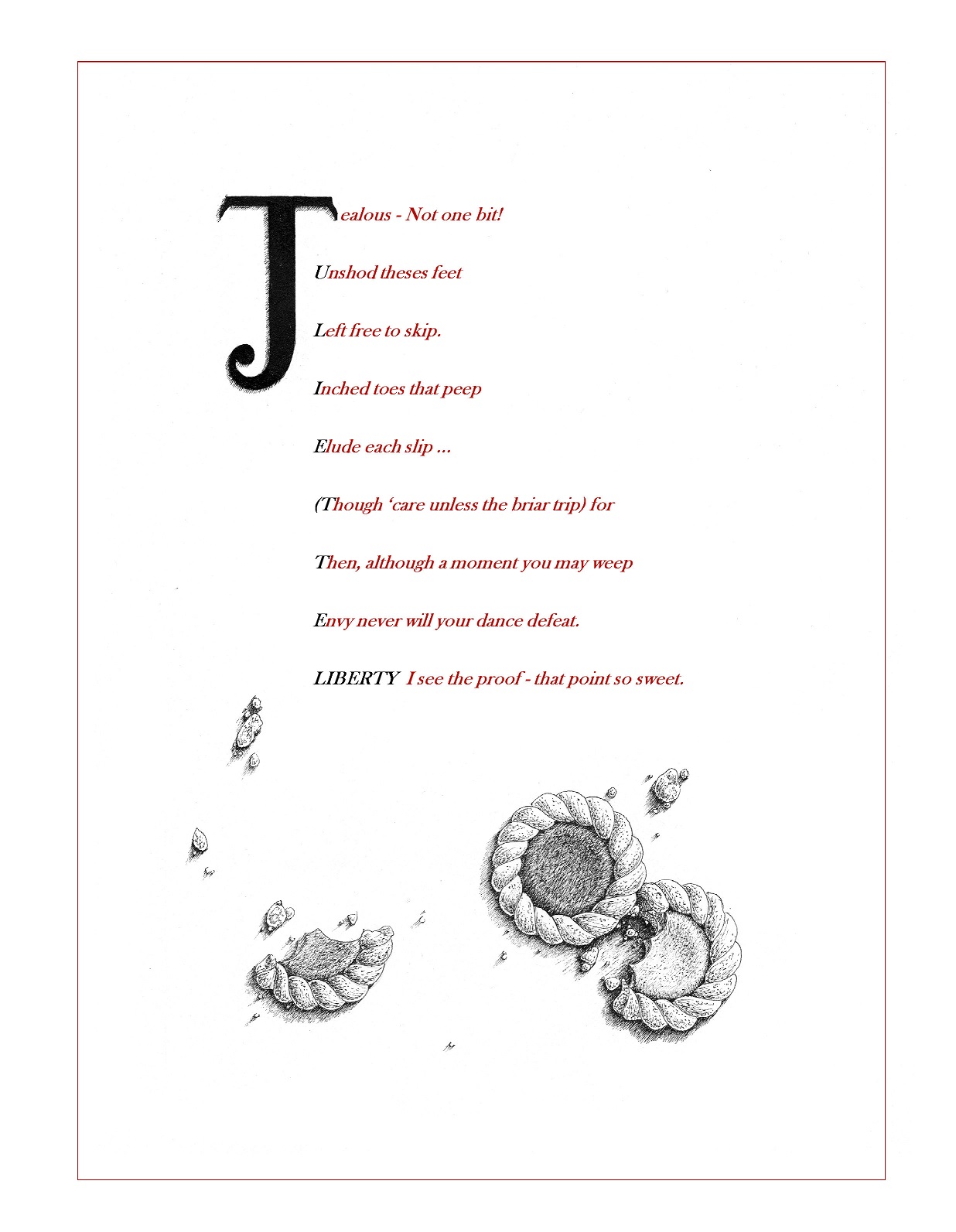 In reviewing the history of this project, Partridge got motivated to better document the details. Although an enjoyable process, he did have an odd feeling of “curating my own past”. There are still a few examples that have yet to be used in any final pieces. 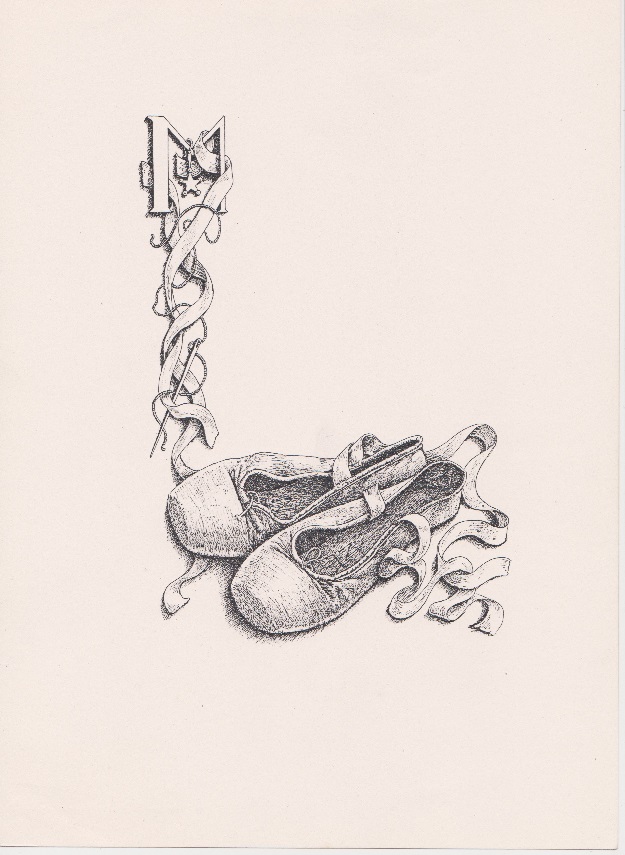 The story does not end in 2003. Since this is a work of inspirational impulse, new pieces have been added. Although Ovenden’s original books were well-sourced and researched, he was not pleased with the production value of the images themselves. So he took it upon himself to learn the craft of printmaking and began publishing hand-printed books with museum-quality paper and bindings. These are fairly expensive volumes for a select clientele which created the impression that Ovenden was no longer productive. He began publishing under the name Garage Press, mostly expensive tomes with a few commercial productions thrown in such as Robin Hanbury-Tenison’s Echos of a Vanished World (2012). So since about 2015, there has been an updated hand-produced version of Acrostics available. Below is one of the new additions to the volume that now contains more than 20 diptychs. 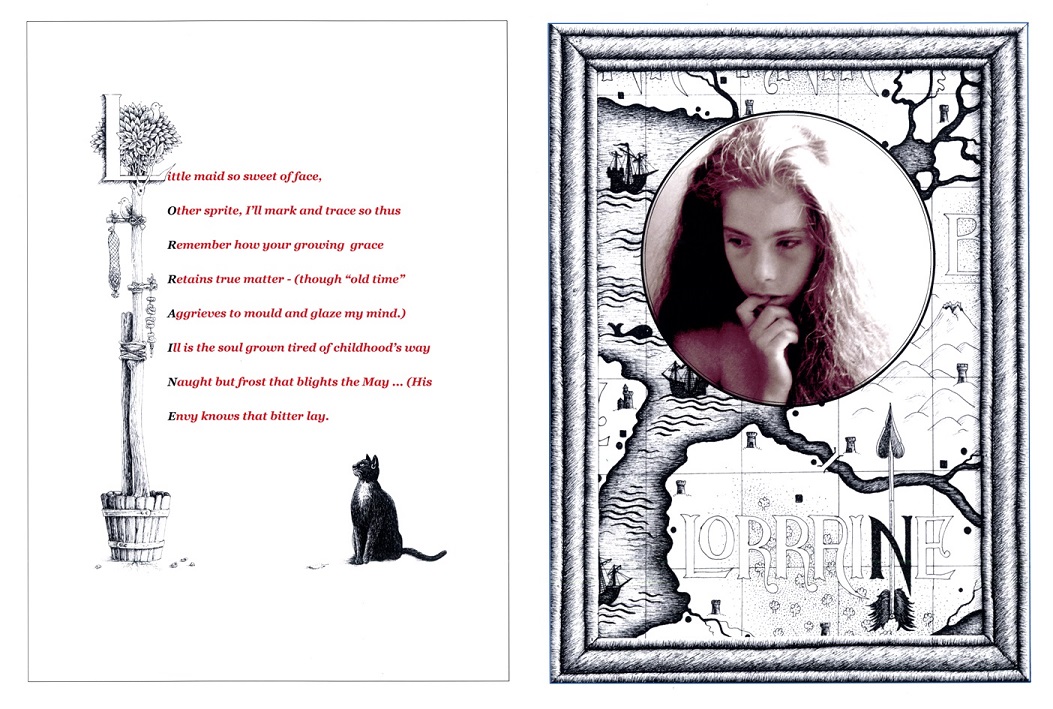 There is a lot more to the Garage Press story and efforts are underway to print more commercial productions that would be accessible to the general public. My next major post will be about this story and give an overview of the titles currently available and what arrangements can be made for the more serious collectors among you to purchase them. And as mentioned above, Brian Partridge’s long overdue post will follow shortly thereafter.