I must apologize to Arizona and Pigtails readers for not getting to this sooner.  Ideally, this would have been posted before Halloween.  -Ron

Back in 2015 Pip produced a Halloween themed post featuring the work of Samantha Everton. As this is not the artist’s only project to feature girls, I thought it would be a good idea to create another Halloween post featuring her series entitled ‘Vintage Dolls’, which also has a spooky feel to it.

Everton is a multi-awarded and exhibited photographic artist who completed a degree in photography at the Royal Melbourne Institute of Technology. When she graduated in 2003, she was at the top of her class and had also received her first awards, one for having the Highest Aggregate Score Winner for photography students and the other was the Steve Vizard Most Creative Folio Award. 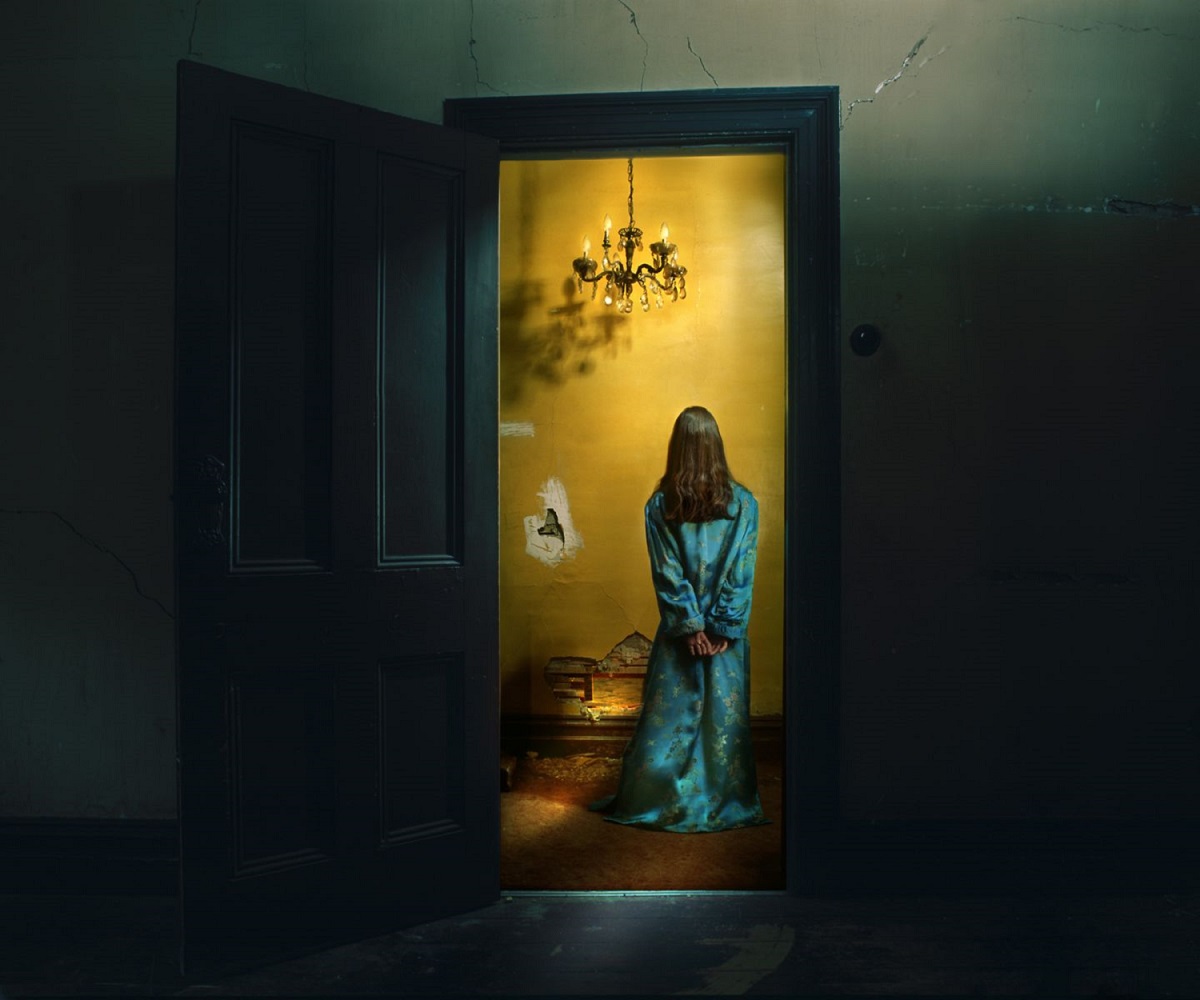 The creation of her photo shoots can sometimes take a year, from sketching the idea, finding the location, sourcing the props, then the models and even deciding on how the styling, hair and makeup appears. In her ‘Vintage Dolls’ shoot the house was the most time consuming prop to find, largely because Everton planned on partially demolishing it. After many months of searching she found a house that was about to be torn down, which also had an owner who was willing to give her complete control of the building. After signing a one month lease she set about changing the appearance of the place by putting up wallpaper, smashing holes in walls and planting a tree in the lounge room. The series ‘Vintage Dolls’ is a collection of twelve works depicting several children participating in a surreal game of dress-up and make believe, however the artist never explains the symbolism or narrative content of the images, instead leaving the viewer to guess the meaning behind the photographs. She does give some clues as she explains that:

The house had a ghostly feeling and remnants of a past life; it juxtaposed against the playfulness of the children … It’s like the children are in an attic and they’re play-acting but on a deeper level, I wanted to show how children interact with culture and how they absorb and re-enact what they see. I wanted there to be a child with whom each person could identify.

The two images below show how surreal some of these images can become with the aforementioned tree, featuring in Nocturne, and a levitating cat, appearing in Camellia. 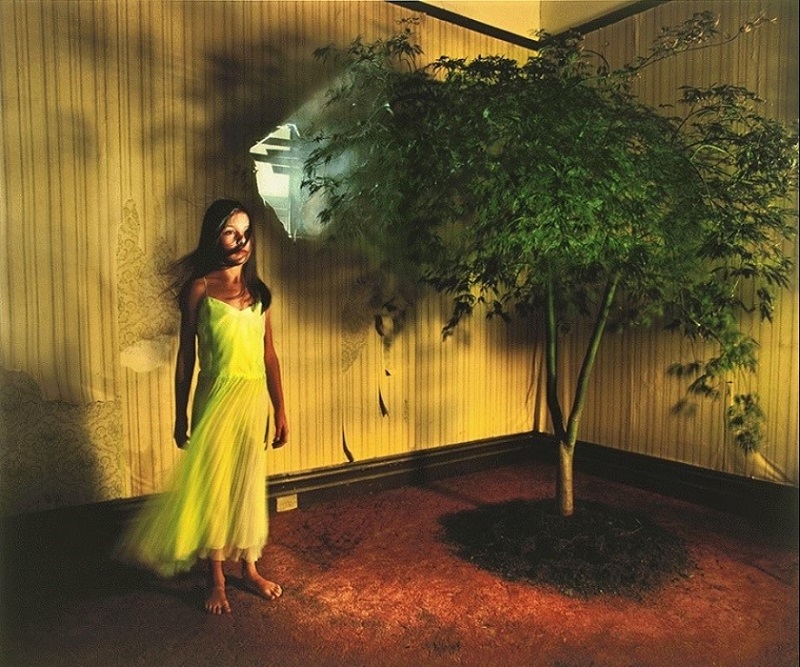 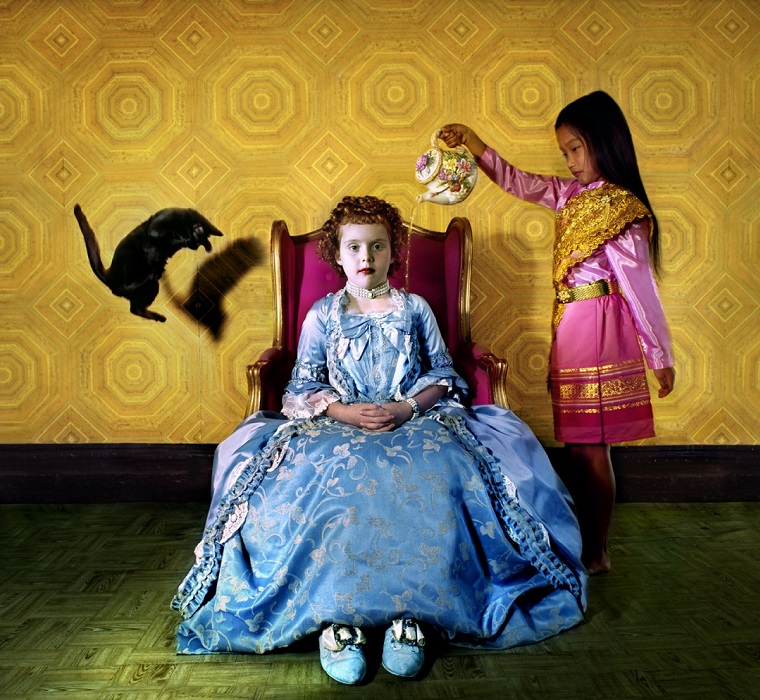 Each of these images are a meter in width and height, therefore some don’t transfer well to small image sizes. For example, in the image entitled Black Forest you cannot tell whether the child on the bed has her eyes open or not, even a small difference like this can change one’s interpretation of the artwork’s meaning. The reason for including it here is because it seems to be the favourite among these images. At the exhibition for this series when other images had either not sold, or had sold up to only three prints, the Black Forest had sold over six prints. While the symbolism to that image is complex and obscure, I cannot see beyond the Red Riding Hood imagery. The next is clearly about racism; in Party Dress a young girl stands in front of a mirror, in reality wearing western clothes, but in the reflection she wears the clothes of her home country. The image suggests that the girl is wishing that she was living in a place that is more accepting of her appearance. The next two artworks imply a desire to escape something. In Secret Garden one of the girls looks out a hole in the wall but is seemingly unable to get out there. Whereas in the Bewitching Hour one girl, who is the only child in the series to smile, literally takes flight on a flamingo, while the other unsmiling girl is stuck on a bird that stubbornly refuses to move. The entire twelve images from this series can be seen on Samantha Everton’s website, though these images are rather small and nine larger images can be found at the Arthouse Gallery website. Additionally, if anyone else wants to share their theories about what any of these images could mean then please leave a comment below.