There is no shortage of vintage advertisements with adorable little girls in them, but those old soap ads seem to be particularly charming. And it so happens that there are tons of them from the major soap brands like Sunlight, Packer’s, Fairy, and most prominently, Pears, easily found on the web. We’ll get to all of these in upcoming posts, but today’s post is devoted exclusively to one of the biggest soap brands of all time, Ivory.

Ivory Soap was first manufactured by the J.B. Williams Company in 1840 under the name Ivorine, but this didn’t last long. The company soon sold its rights to the soap to Procter & Gamble, who eventually changed its name to Ivory. Ivory Soap is known for two famous slogans, “It Floats” and “99 44⁄100% Pure.”  The latter was especially popular for years.  In the ’50s and ’60s their main slogan became “That Ivory Look”, which was associated with the smooth skin of infants and considered the ideal for women.

Edit: in the comments section a reader named Robert has added the following information which adds some important history that Wikipedia gets wrong. I will just post the entirety of his comment here, which reads:

It’s misleading to say Ivory was first manufactured by Williams as Ivorine. What happened was that P&G had settled on the name “Ivory”, did a trademark search (or were contacted by Williams), and bought the rights to “Ivorine” and “Ivory”. It’s also possible that P&G’s story about the inspiration for the name “Ivory” is false (as was their story of its floating quality’s having initially been an accident), and that the company desired a name similar to the known “Ivorine”. Williams’s soap formula was not part of the purchase, the formulas of the respective soaps having been arrived at independently, or as independently as could be said to have been done in that business.

The new information is much appreciated – Pip

Most of the early ads were of course illustrated, often by some of the most notable names in the business. One of those was Irving Ramsey Wiles. While he later became a successful portraitist, his early career was largely devoted to magazine and ad illustration, such as the following two variants of the same piece: 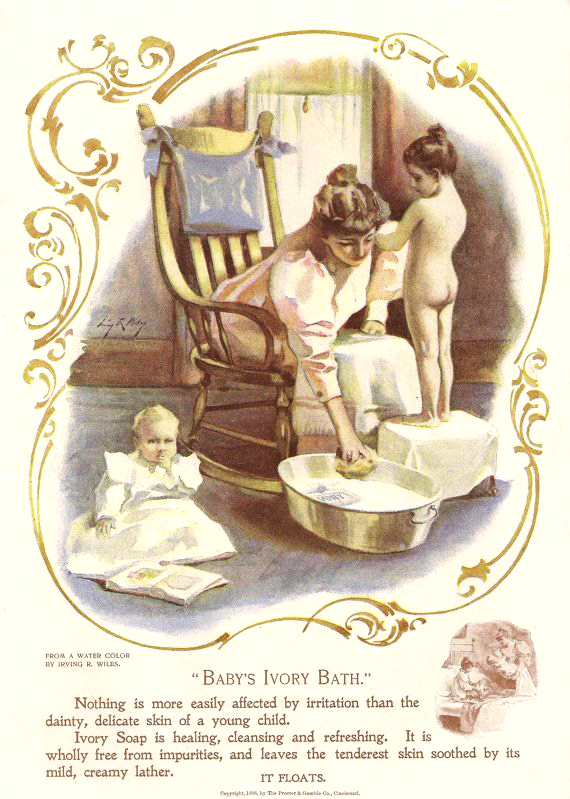 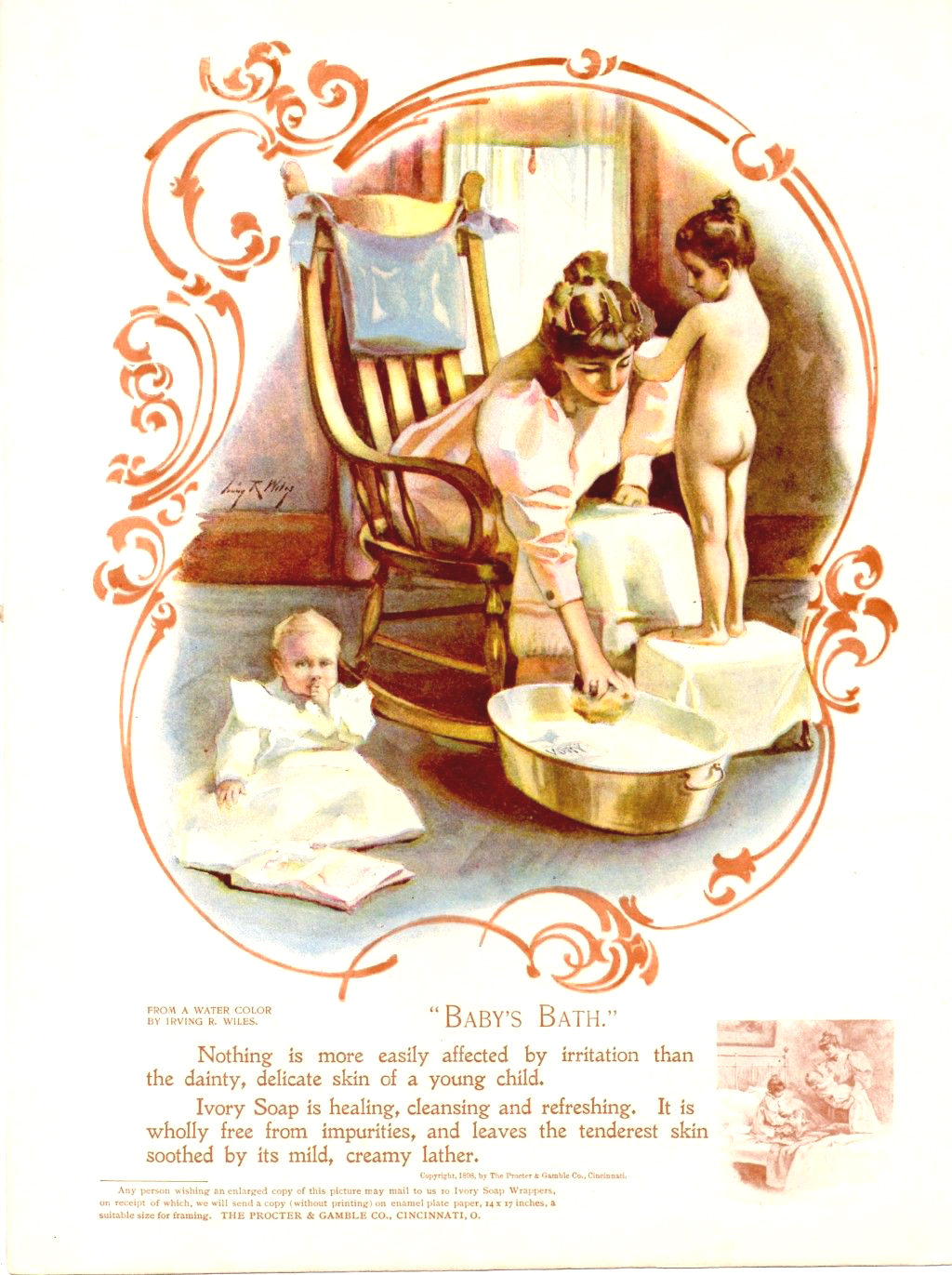 Another major illustrator who did illustrations for Ivory Soap was the ever-prolific Jessie Willcox Smith.  Here are three from her all done right around the turn of the twentieth century.  Note: a full-color illustration by Smith also featured in an ad for one of Ivory’s major competitors, Pears.  It’s already been posted here once, but I will likely link to it again when I make the Pears post. 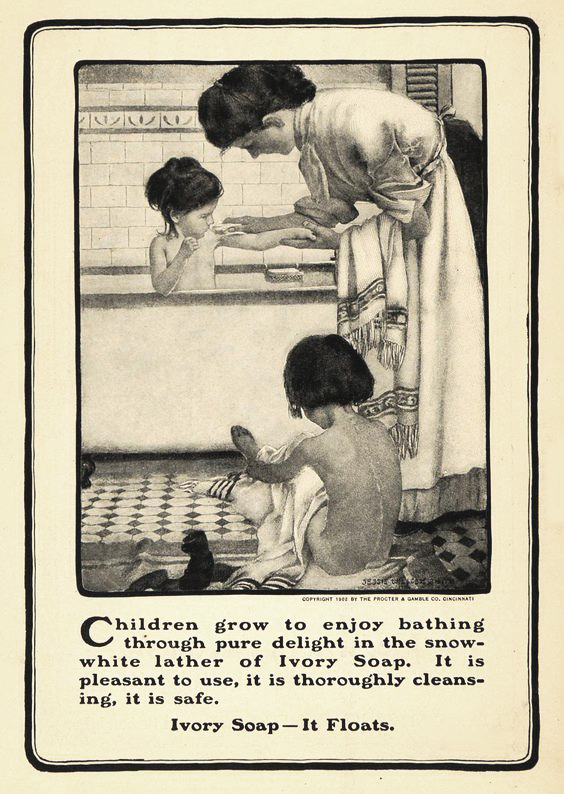 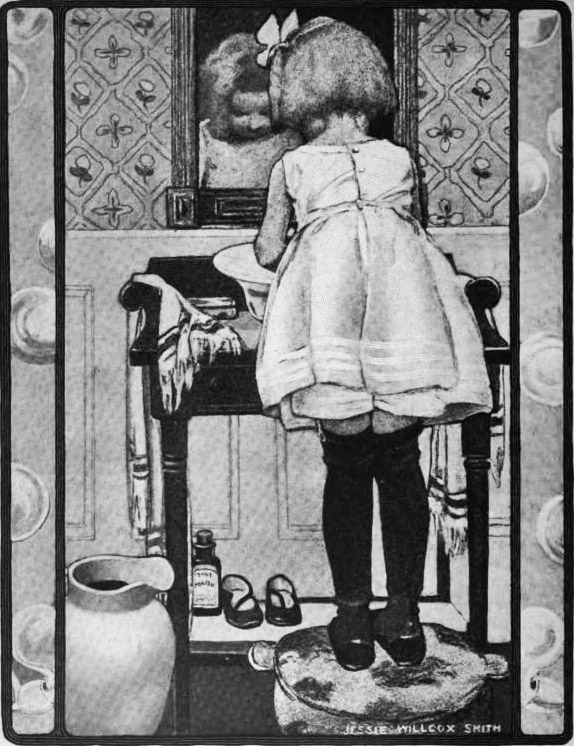 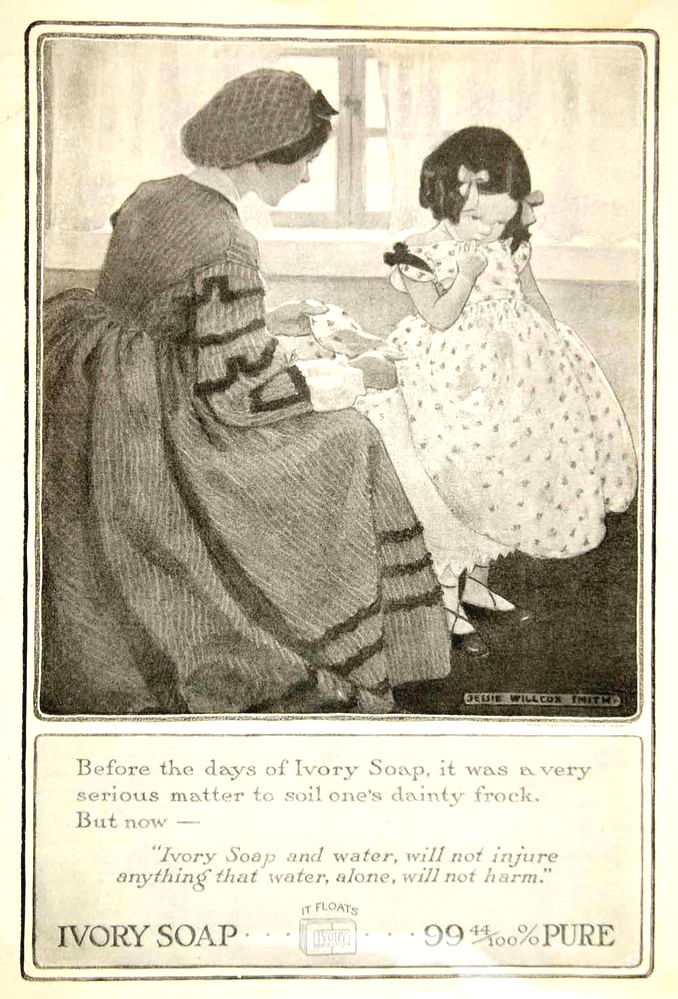 This next piece, although labeled as a Smith illustration when I found it, is not actually her work.  The artist’s name in the bottom left-hand corner, although difficult to make out, appears to be Albert Herter, which makes sense as Herter was definitely a contemporary of Smith and is known to have been a prolific illustrator in his own right.  And although all of the advertising info has been cropped out, you can see that the theme of the piece is the children’s bath.  The young woman here looks to have her hands full with all the kids waiting to be scrubbed clean by her. 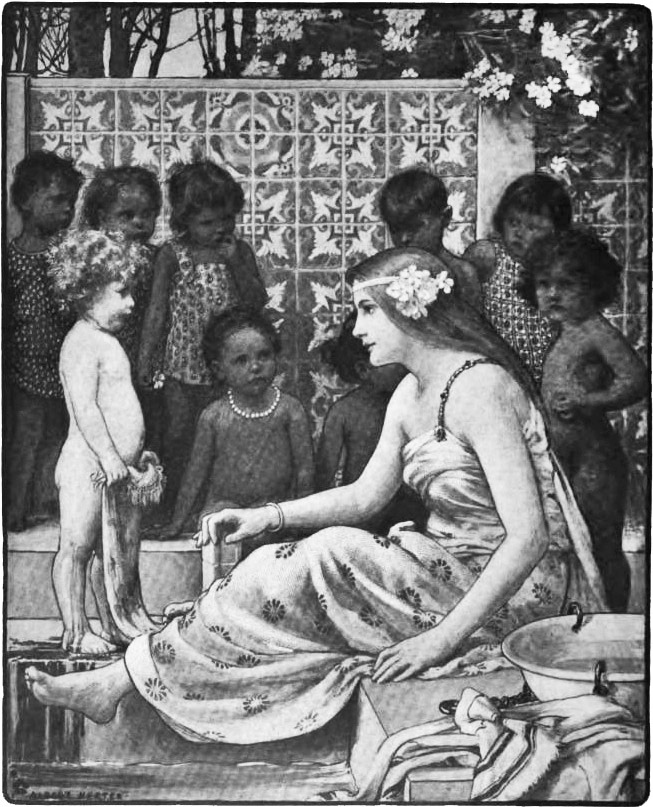 Yet another highly productive illustrator who did several pieces for Ivory Soap was Alice Beach Winter.  Although no dates are given for any of these, we can judge from the style, and from what we know of Winter, that these are either from the Edwardian period or slightly later. 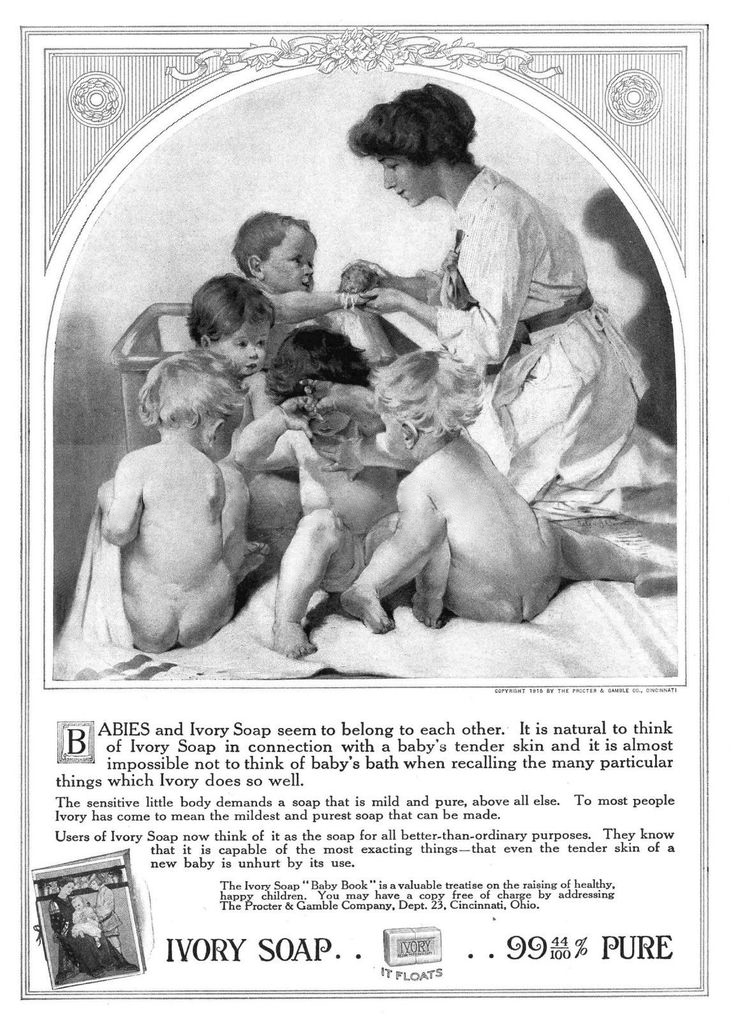 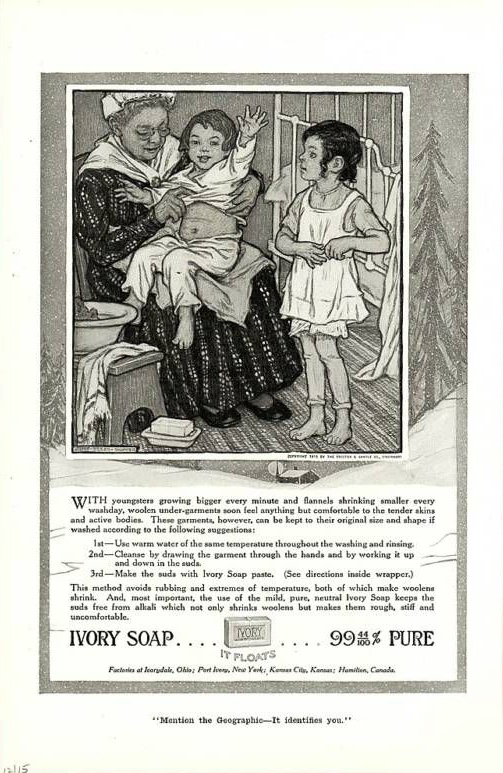 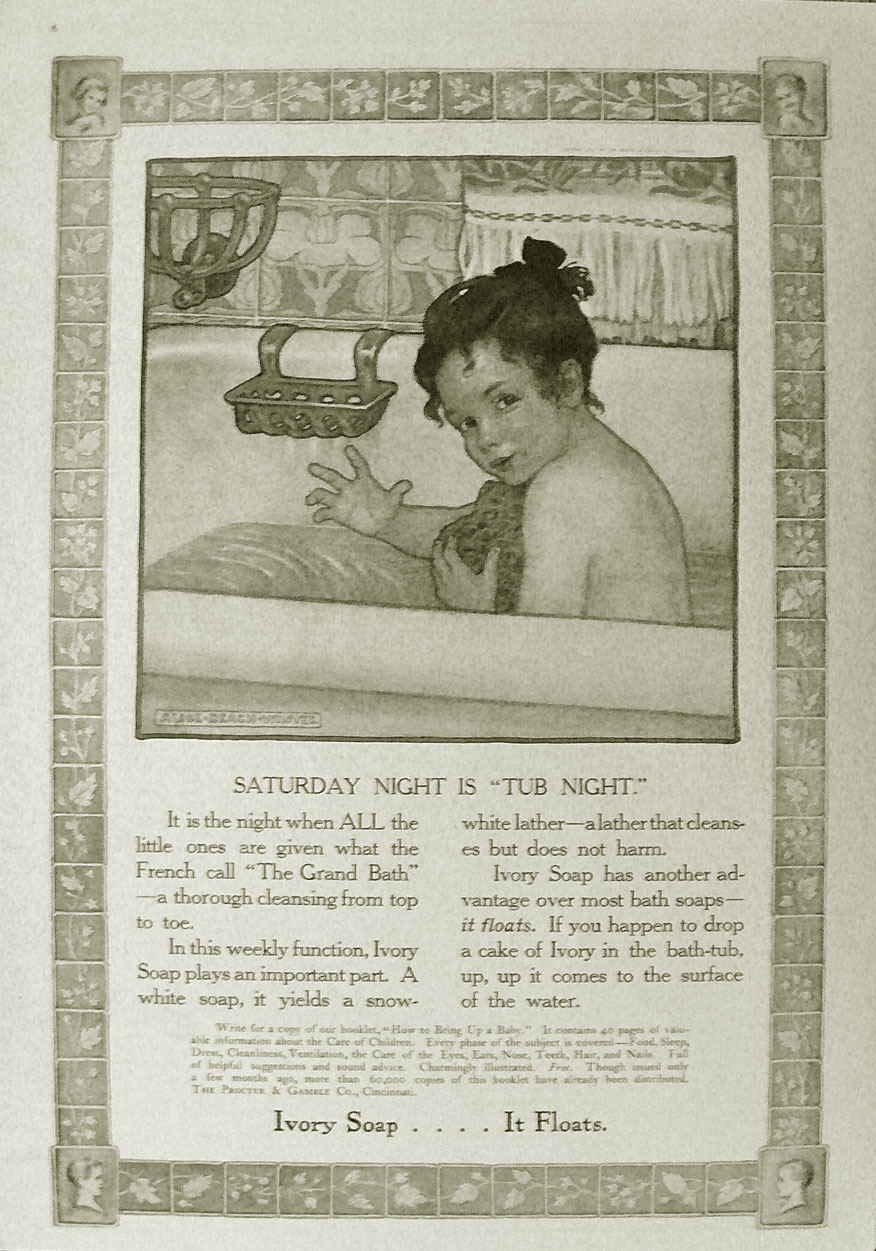 I do not know the artist for this next illustration, but again, it’s from the same time period. 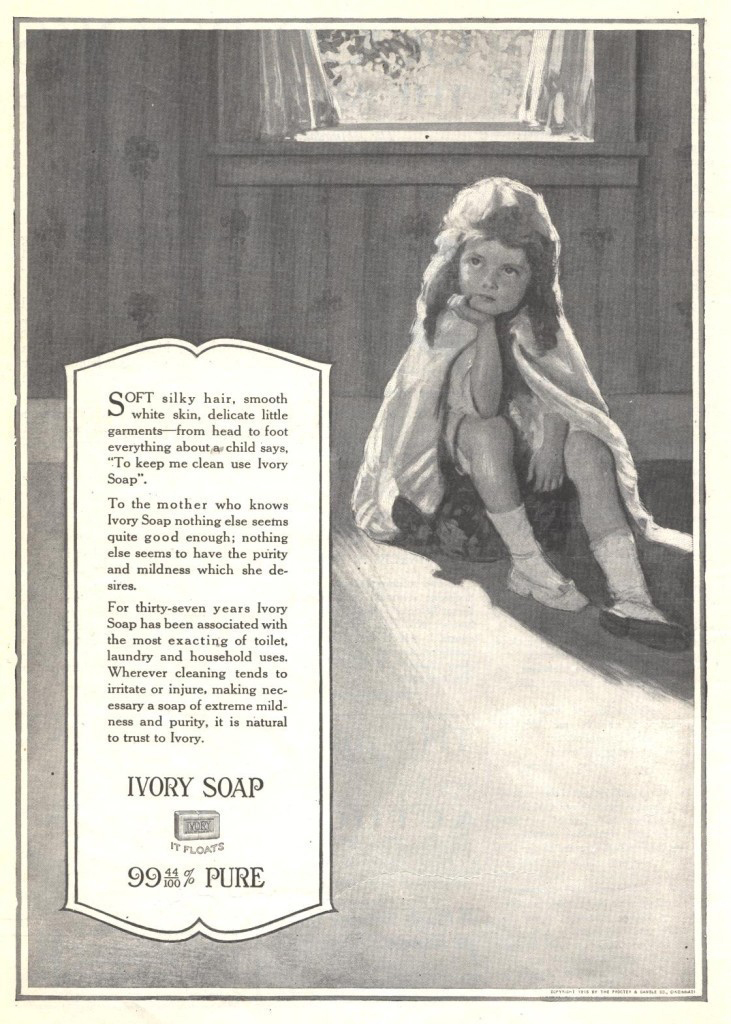 Our final Golden Age illustrator is Clara Elsene Peck.  Like Jessie Willcox Smith, Peck focused primarily on the lives of women and children, which made her a natural fit for illustrating Ivory Soap ads.  I especially like this first piece, which I’m posting two different versions of. 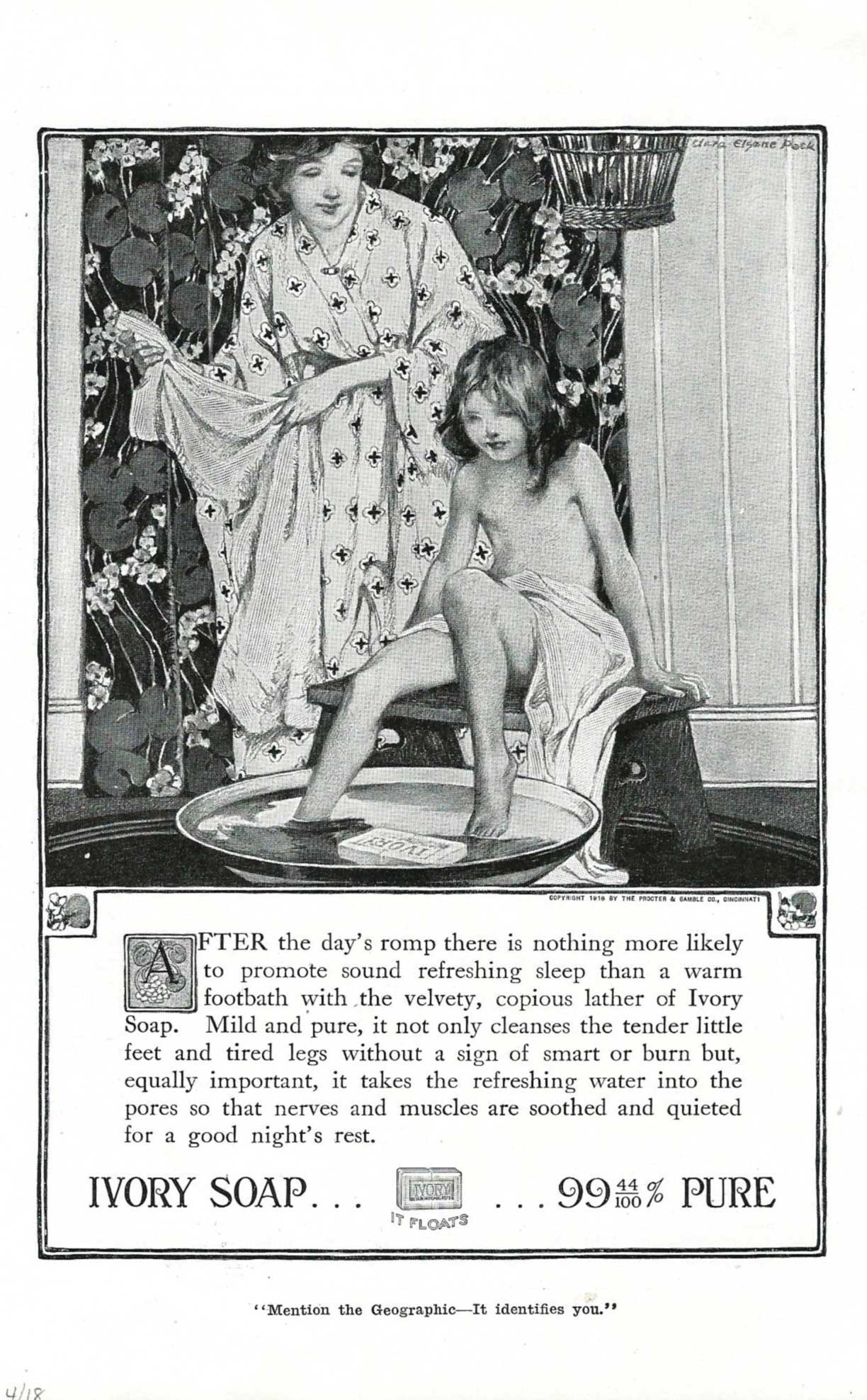 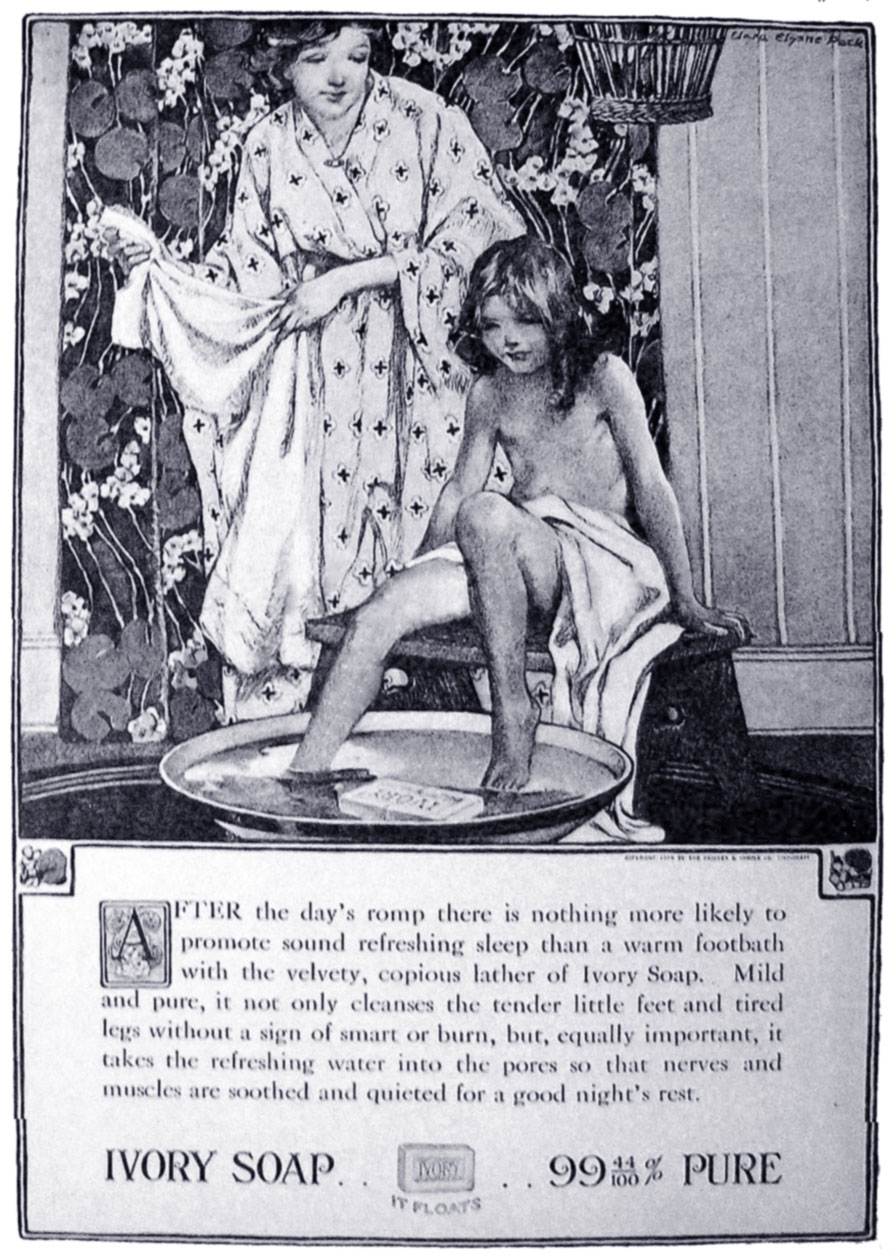 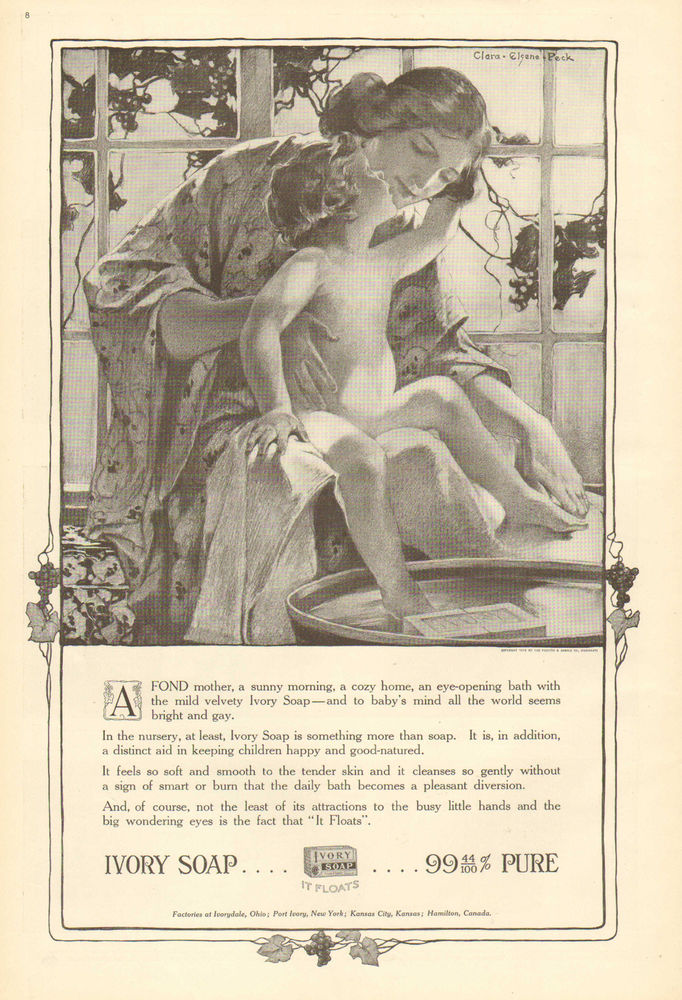 And now we move on to the era of photography with a trio of ads featuring images by unidentified photographers.  By the ’50s it became fairly commonplace for advertisers to stop displaying the names of artists, especially photographers. 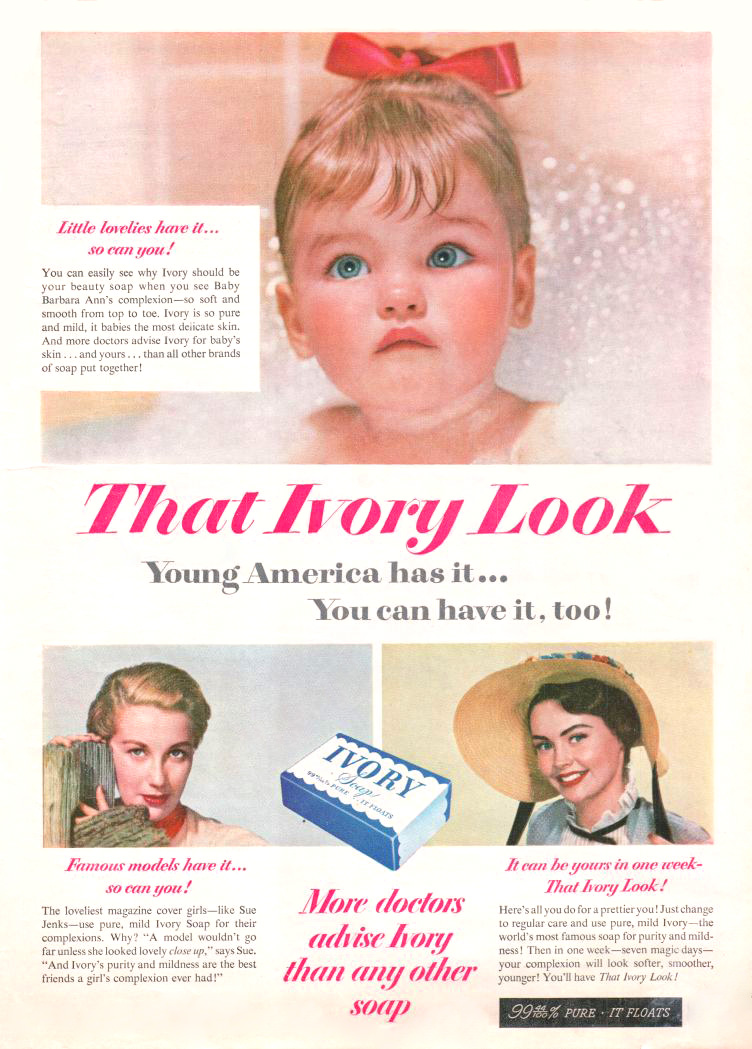 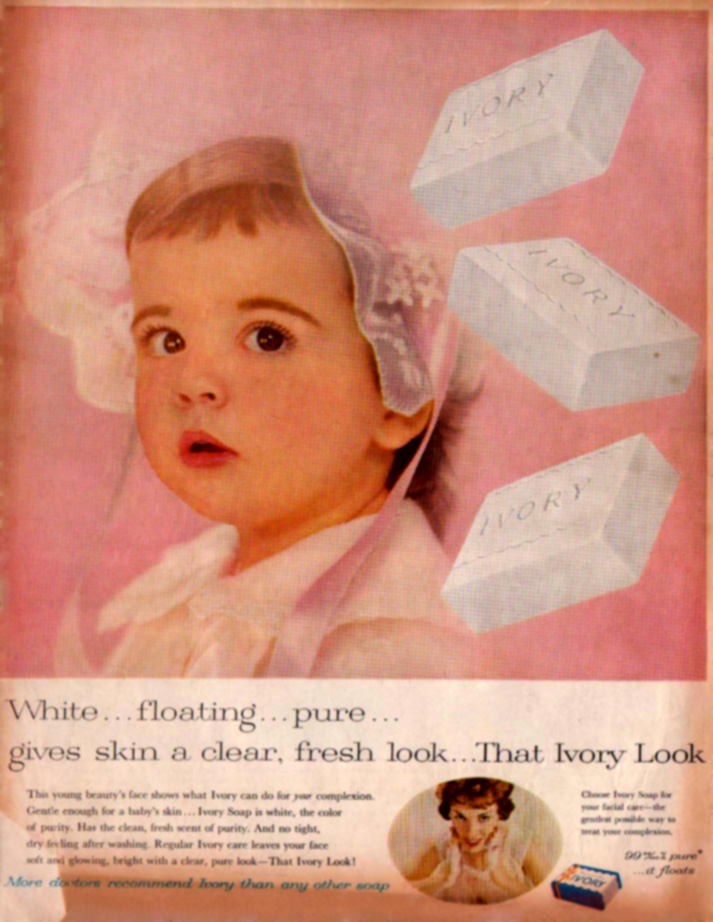 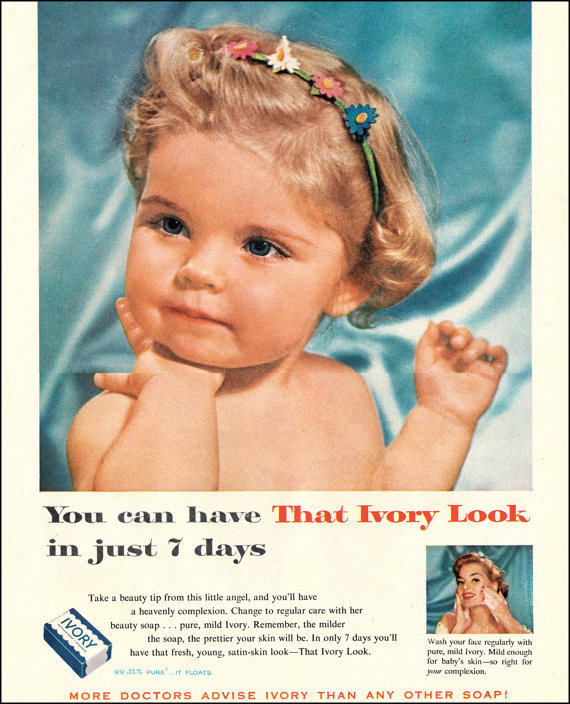 But here is one of the exceptions.  Francesco Scavullo’s work was so well-known and prestigious in the ’60s and ’70s that he has been identified as the photographer in these ads.  The idea of mothers competing with their little daughters to look youthful would later become controversial with feminists, of course. 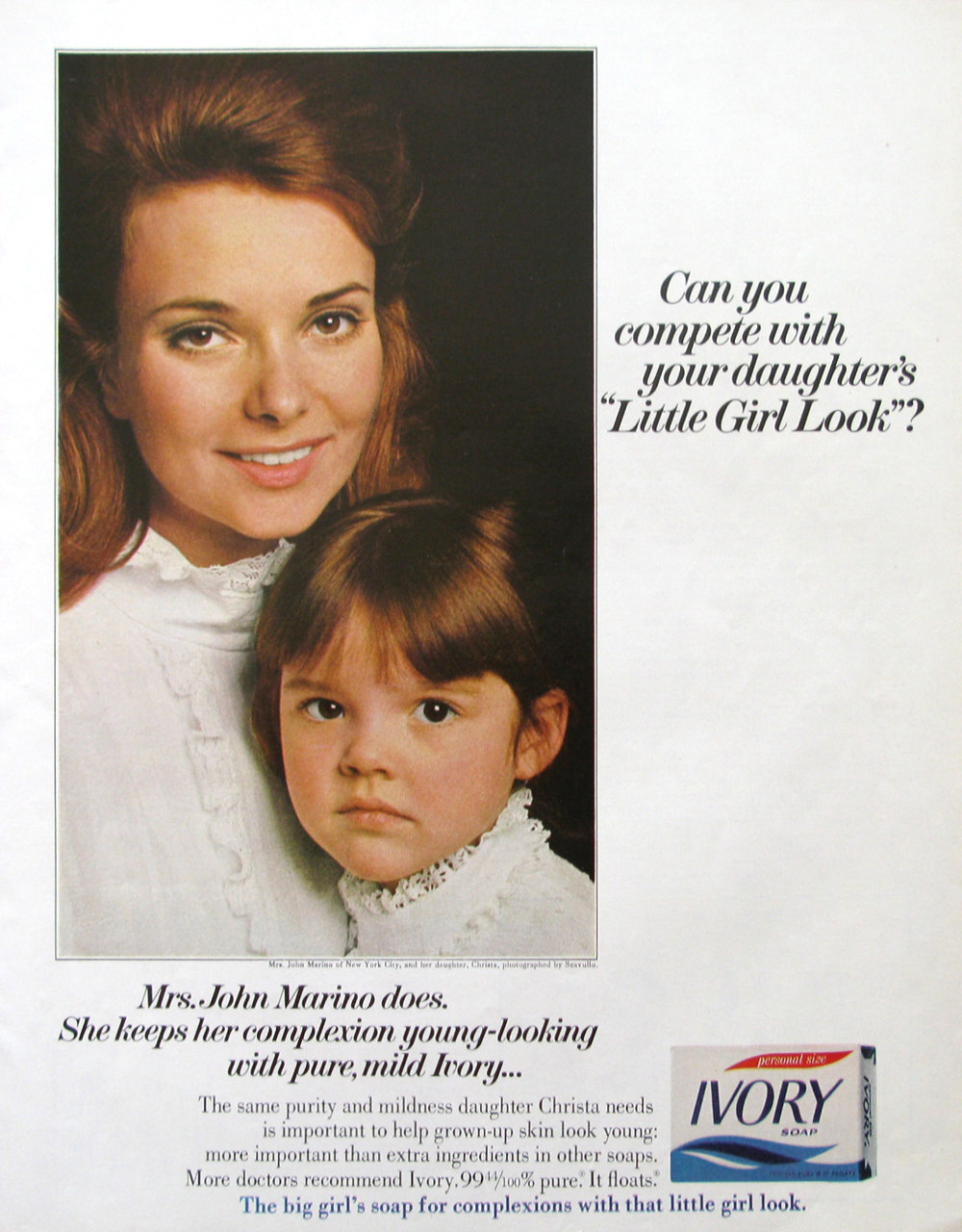 Francesco Scavullo – Ivory Soap – Can you compete with your daughter’s “Little Girl Look”? (1) 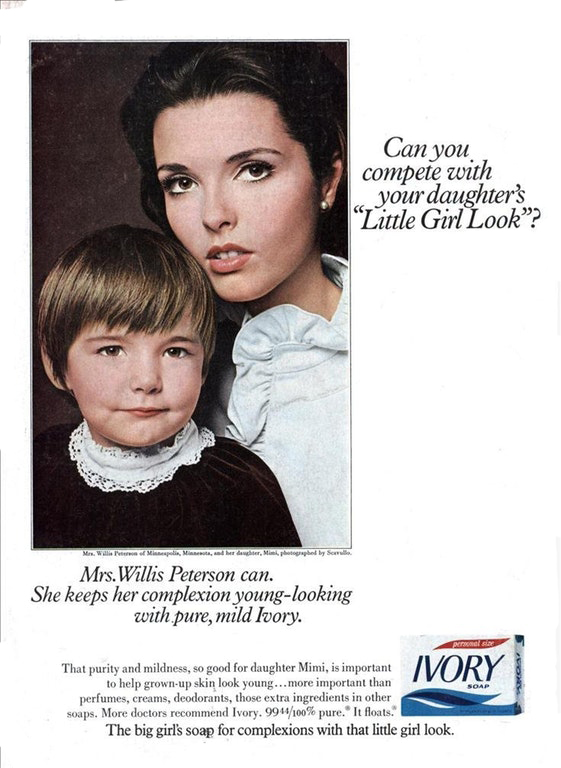 Francesco Scavullo – Ivory Soap – Can you compete with your daughter’s “Little Girl Look”? (2)

Edit: I had intended to add this to the post originally, but it was not yet ready. So I am adding it now.  I had another commercial I wanted to post but its size exceeds the limit for upload so I will simply link to it. – Pip