There are a number of themes that many classical painters tackled such that they nearly became traditional in art, and they largely fell into two central categories: religious themes such as the Virgin and Child, the Annunciation, the Crucifixion and the Temptation of St. Anthony, and mythological themes such as the Judgment of Paris, the Rape of Europa and of course, the Birth of Venus. I have decided to do my own take on several of these traditional  themes, starting with this one. Naturally, my pieces will be rather loose interpretations and will include primarily children in the roles of classical or biblical figures à la the film Angyali üdvözlet.

In my somewhat surrealistic version of The Birth of Venus, our goddess is about ten or eleven years old, and she emerges not from the sea but from a bathtub full of wine which she herself is pouring. The idea here is that Venus is not literally being born, but rather this girl is becoming Venus by vinous baptism (get it?)  In fact, Venus was initially a goddess of fertility and was associated with vineyards, so the wine is appropriate here, though in our modern Western society children cannot legally drink it. Thus, there is a hint of illicitness here. Shells are also a common symbol of Venus, and our young goddess wears one around her neck, as well as there being a large one on the side of the bathtub. Venus is also surrounded by putti, as is often the case in paintings of her.

This entire scene takes place amidst ancient ruins, telling us that Venus is one of the old gods, though this is contradicted by the girl’s youth. Venus shall remain eternally young, and to my way of thinking, she should not be embodied by a single figure but rather is reborn whenever a young girl develops her first hints of womanhood. To be sure, I blatantly stole this idea from Moebius. This image differs slightly from my usual pen & ink pieces in that I deliberately gave it a foreground, middle ground and background whereas usually I’m quite content with just foreground and middle ground or foreground and background. This gives the composition more depth and richness, I think, and as a result this is one of the more successful drawings I’ve ever completed.

As is usually the case, this piece, which is 11″x14″, is for sale. If you’re interested, contact me at [email protected]

Edit: Sold! Thank you very much. 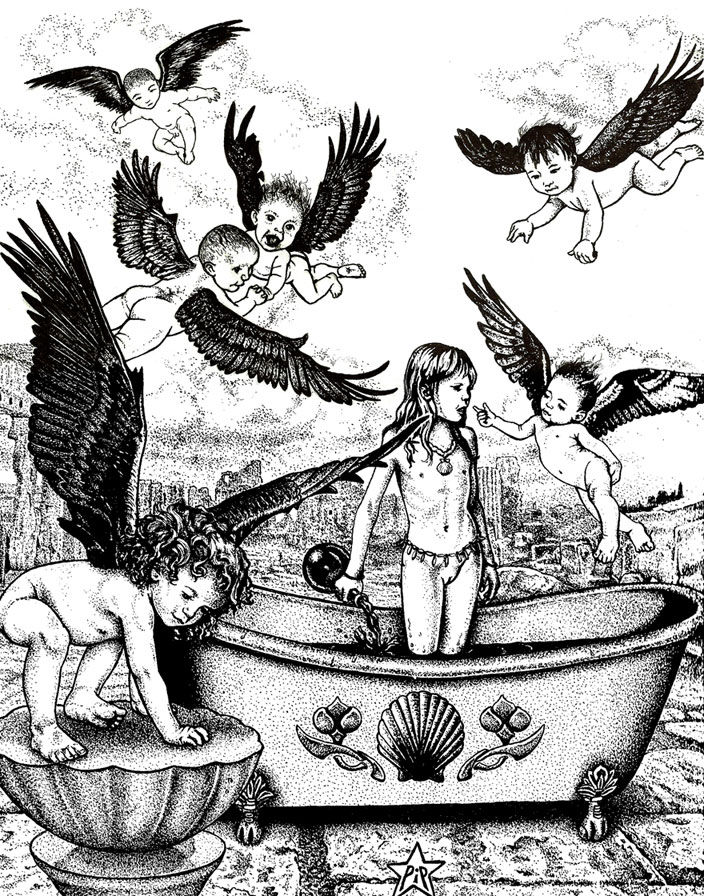 6 thoughts on “The Birth of Venus (Pip Starr Version)”