Another fan of our site has agreed to write for us.  His proposal was to write a series about single compelling images, usually by noted photographers.  I really appreciate his contribution and remind readers that others are always encouraged to offer their writing to on-topic images.  -Ron 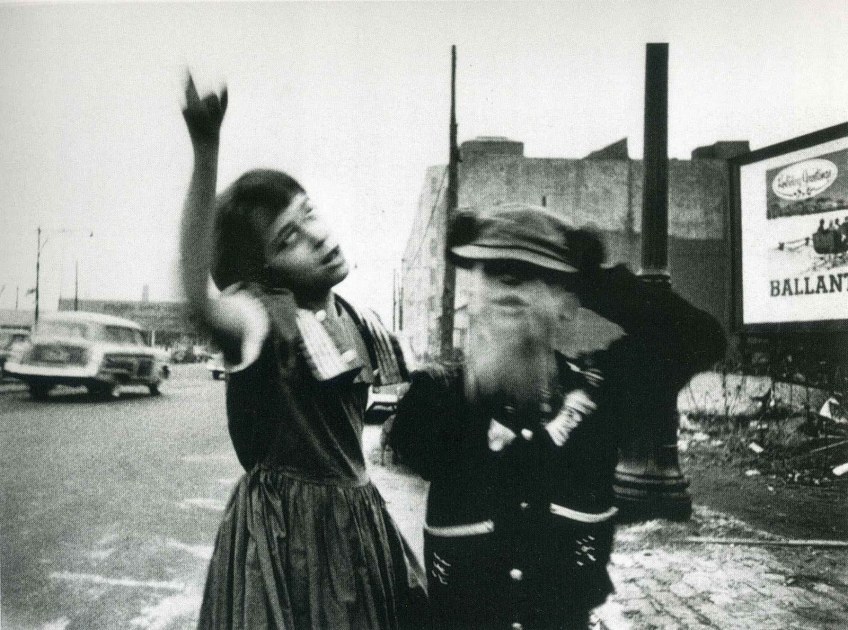 We generally prefer depictions of people to be clear and legible. If a person is out of focus, or too far away to assert their individuality, or in some way obscured, we tend to move on to another, more legible image.

But some photographs and paintings perversely refuse to let us have things easy and, despite the illegibility of their subjects, intrigue us and hold our attention—art has this in common with sports and games: it is at its most rewarding when it makes us struggle and pushes us to dig deeper.

William Klein’s Dance in Brooklyn, New York is an example of such a photograph. It seems to pose the question of how little visual information do we need to find someone beautiful.

The children in this photograph were moving while the exposure was made. Klein’s camera (the shutter probably set at 1/15th or 1/30th of a second) has captured this movement as smears, blur and the loss of form and detail.

These, and the coarseness of the grain, have reduced the face of the girl in this photograph to a few broad lines and surfaces. It has the look of an African mask.

The reading of the face depends, more than with any other part of the human body, on the legibility of fine detail—think of how little difference there is between a genuine smile and that same smile held too long and grown stale; think of the kind of details that allow us to distinguish identical twins.

One would expect, given this degree of illegibility, that it would be impossible to get any sense of the girl’s beauty or personality. Yet the little that comes through still manages to give a strong sense of a slim, shapely italic face.

And despite the camera’s imperfect, chaotic rendition of her gesture it has nevertheless captured something that a faster shutter speed (which would freeze the action), or a movie camera, would not: the girl’s energy, grace, and audacity, her confidence, playfulness and sense of humour. There is a trance-like sense of abandonment in the angle of her head and in her open mouth; her eyes at first appear to be looking at the photographer, but a subversive reading has them rolled back into her head, as if in ecstasy.

The photograph offers us a beauty that is especially poignant because it ultimately eludes us: we never really “see” this child. All we get is a tantalising glimpse of a personality whose vigour was imperfectly and beautifully captured for a fraction of a second some 62 years ago.